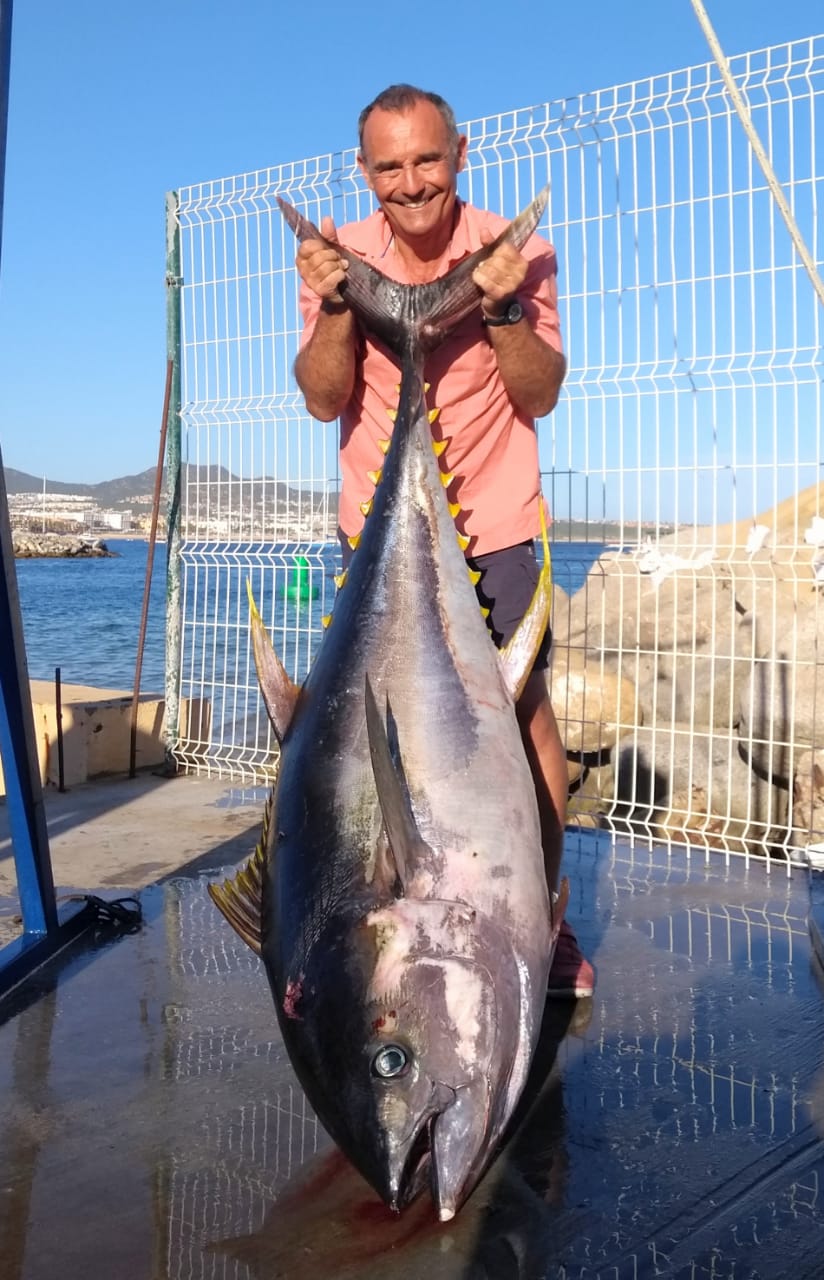 Angler John Bowman from England with his 190 lbs yellowfin tuna

The billfish bite continues this week not only at the Finger but now somewhat closer to the Cabo area, and dorado numbers have climbed drastically as well. Those looking for tuna have also found them, as we see again this week large tuna of almost 200 lbs still being caught by our boats. Another great week of fishing here in Cabo; kicking off a winter season like we haven’t seen in a long time! But the BEST news of all this week was the seizure of a commercial fishing panga and fishermen that were capturing and killing marlin illegally at the Finger Bank by CONAPESCA (fish and game department) and the Mexican Navy. Our boats fishing the Finger had seen these boats many times harpooning marlin and using other illegal techniques to catch and then sell them – even though they are a species that are exclusive for sport fishing. Although our crews reported these sightingsngs, legally there was no way to do anything unless they were caught in the act. This week, our sport fishing industry and government worked together to finally take action. Of the 4 pangas that were fishing and killing vast amounts of marlin illegally one was caught. And although they managed to dump much of what they had caught, 8 marlin (only the body, as heads and tails were cut off) were seized along with the illegal fishing equipment. The panga is in government custody and the fishermen have been detained. This is a big win for sportfishermen, CONAPESCA and Conservationists alike. 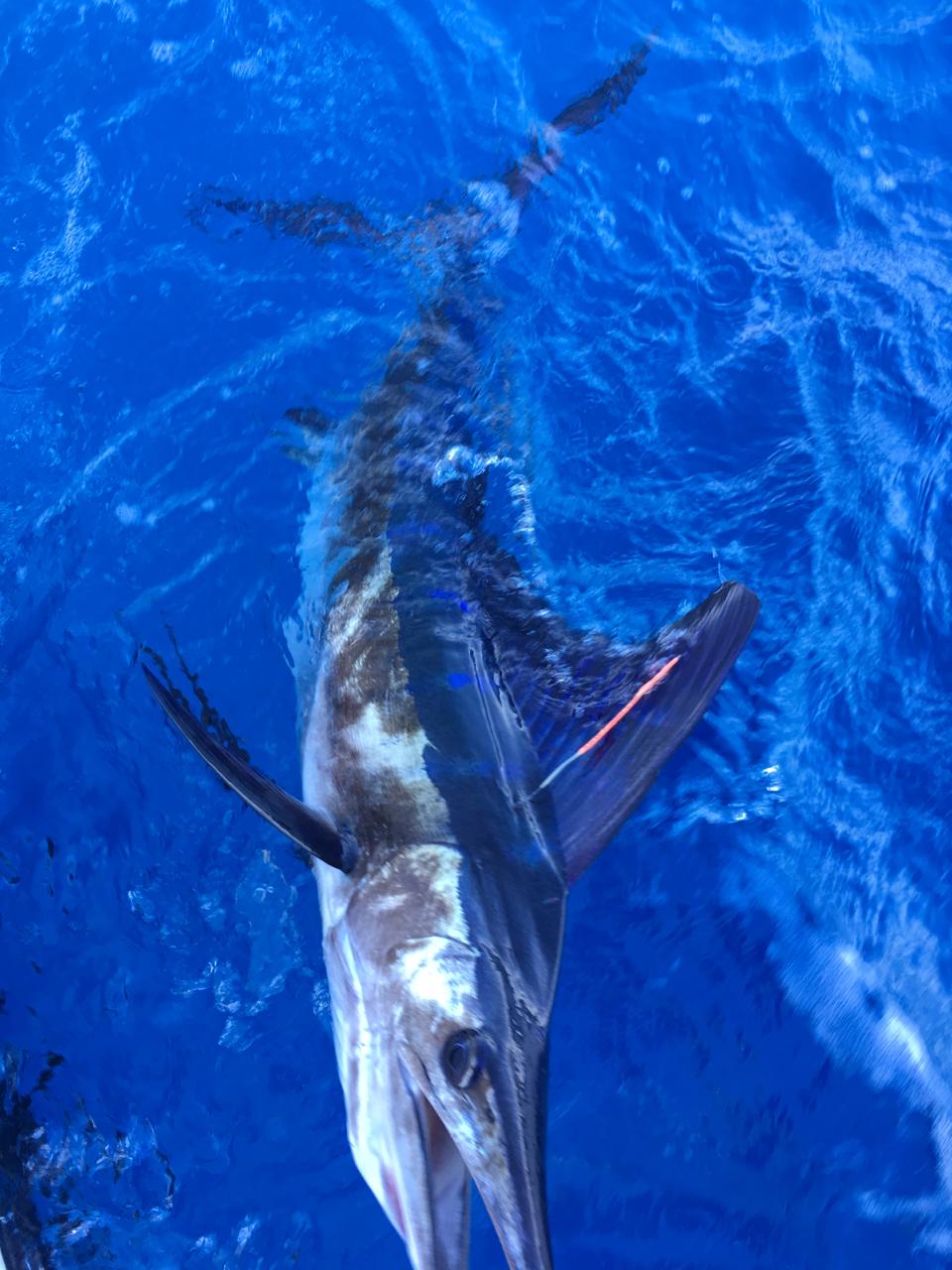 Now for more on the release fishing at the Finger.. We had Pisces 31′ Ruthless head up there this week and on November 18th, catch and release 21 Striped marlin around 120 lbs each.  Anglers were David Pewitt and Leah Dienger from Texas. Pisces 31′ Rebecca also hit the Finger this week, landing 15 Striped Marlin between 100 and 140 lbs each on mackerel and sardines, Anglers were Bob, David and David Sancewich and Donley Sowders from Seattle, Washintgon. Again on November 21st, Rebecca landed 24 Striped Marlin from 100 to 150 lbs each. They also caught and released one sailfish. Anglers were Erik  and Mike Mankowski and Kari Leonard from Brainerd, Minnesota.

The Pisces 31′ Tracy Ann also had a great day for marlin fishing but stayed slightly closer by, fishing by Punta Lobos. Long time Pisces snarler aboard, Jean and Patrick Neville, released 8 striped marlin of about 150 lbs each, using mackerel bait.

Pisces 60′ Reel Machine also found luck close to home, catching and releasing 3 striped marlin just out from the Old Lighthouse, this time using ballyhoo bait. Pisces 35′ Valerie also did well this day, catching and releasing 2 striped marlin of about 120 and 140 lbs each out of the Old Lighthouse on mackerel bait. They also caught 4 dorado between 12 and 15 lbs which they kept. These hit a  bit further up the coast, at the Cerros De Arena, on mackerel as well. Client was also long time Pisces angler Andrew Heine, along with Aiden Heine, form Denver, CO. Later in the week the Valerie did well again with striped marlin closer by, catching and releasing 3 stripeys at Cerros de Arena on mackerel. Most fish were only juveniles, ranging from 30 to 80 lbs each. They also found 5 dorado there, all between 10 and 20 lbs each. These hit on feathers and mackerel bait. Anglers were the Yu family from Los Angeles. 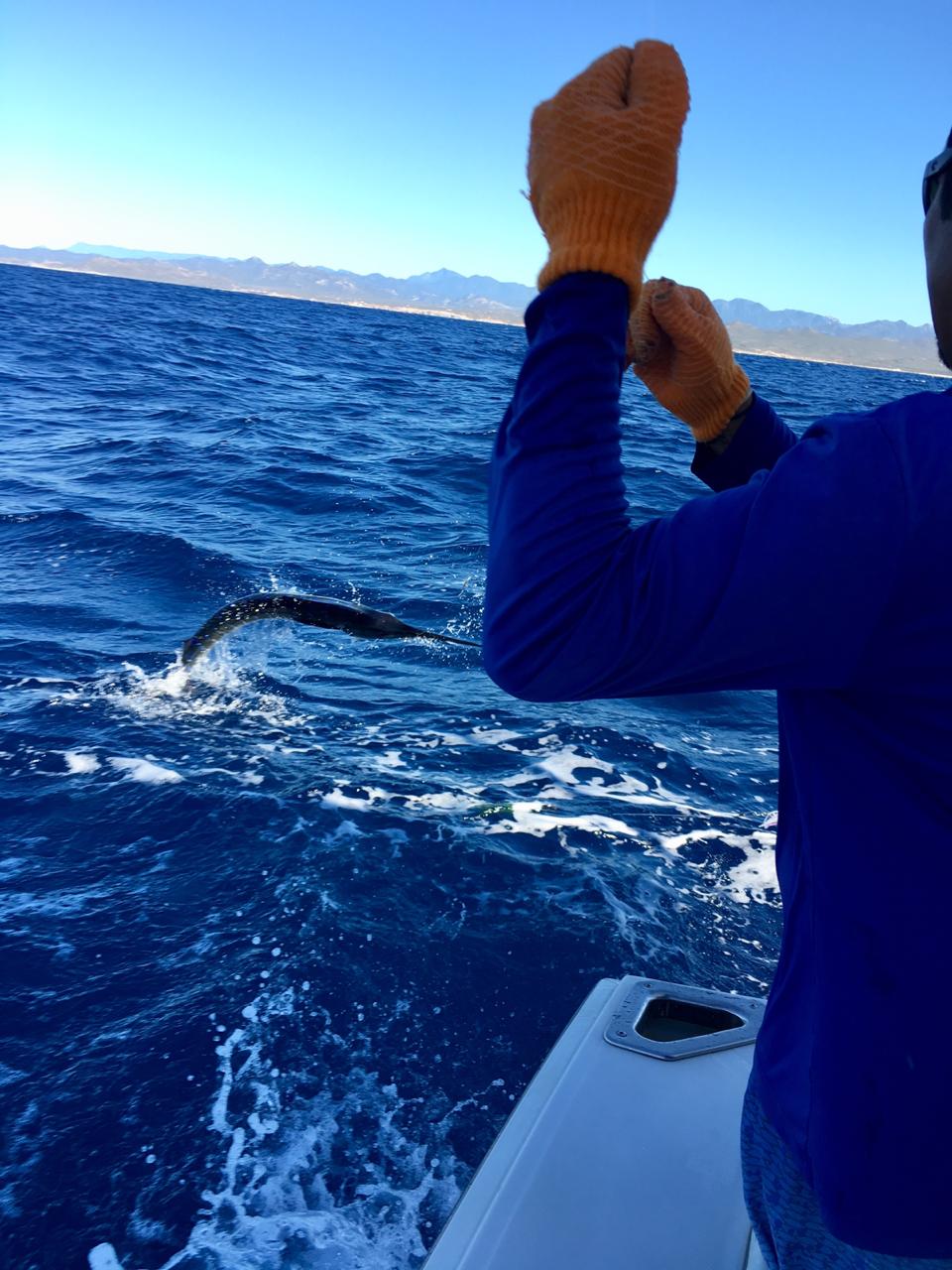 Striped marlin at the leader on Pisces 42′ Caliente

Pisces 32′ Bill Collector also had a wonderful week, not only at the Finger where they caught and released 12 striped marlin from 100 to 180 lbs on mackerel. But also later in the week, with anglers Tim and Scott McCulloch from Castle Rock, Washington. They fished November 21st,  and landed 5 Striped Marlin between Golden Gate and Gaspareno on mackerel. All fish were released. Thanksgiving day, which also happened to be Tim’s 61st birthday, they headed out again, this time looking for tuna. They landed 7 yellowfin total, including a nice 132 pounder by Tim! All other were about 25 to 30 lbs each. They headed out to the 220 Spot to find them. And going back to the beginning of the week, Nov 17th, our English anglers who fished the whole week before with us (landing a 415 lbs blue marlin on the Andrea), landed again a nice blue, this time of about 180 lbs on mackerel about 21 miles out from the Old Lightouse. They also landed an impressive 190 lbs yellowfin on a guacamayo lure at about 12 miles out. Anglers were Dave West, John Bowman, Mark Jones and Steve Murphy. 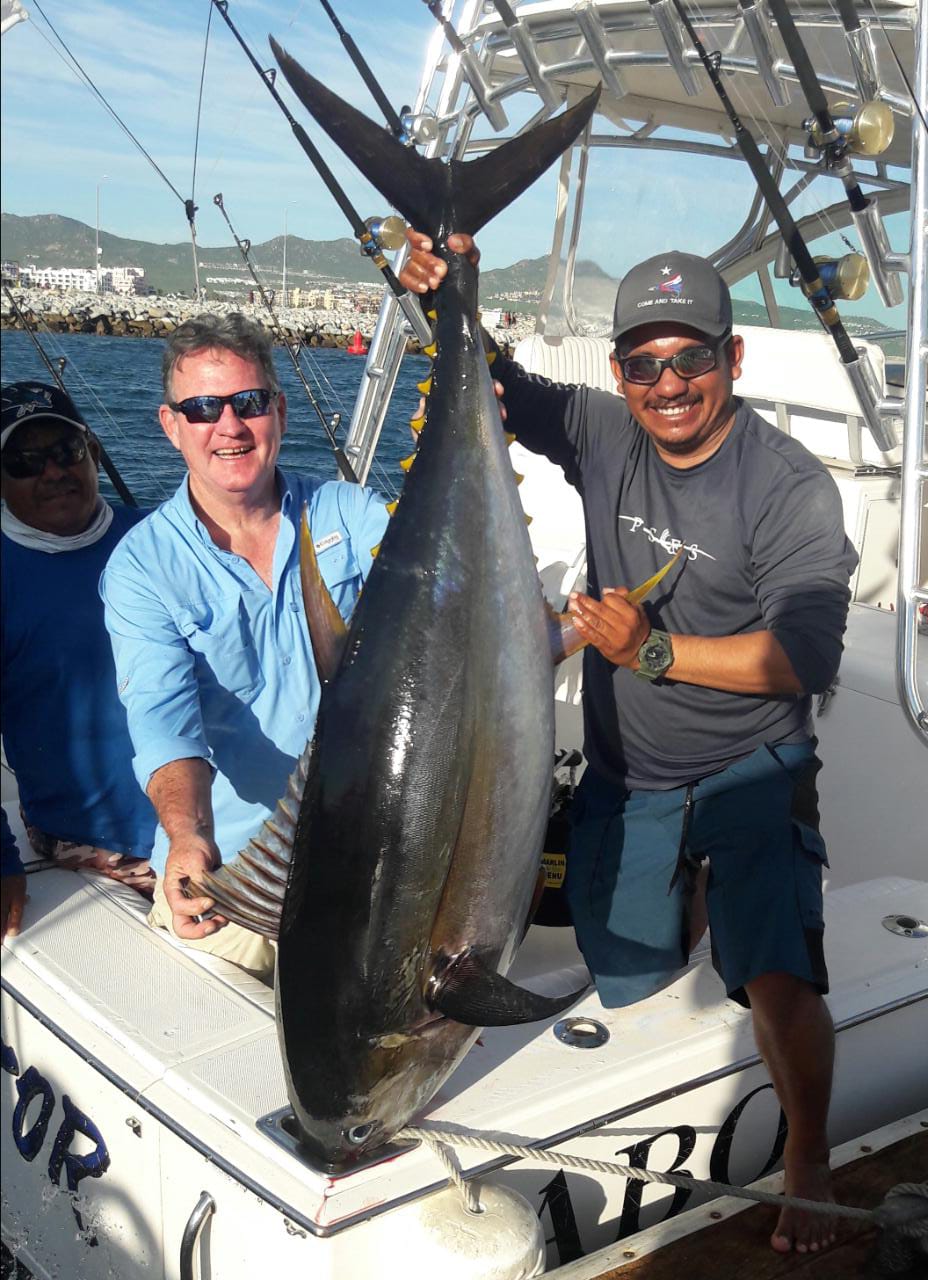 Tim McCulloch with his 132 lbs yellowfin tuna caught on his 61st birthday!

Others found luck with tuna as well, even when not targeting it specifically. Pisces 27′ Boston Whaler, BajaMark for example, caught 2 nice yellowfin tuna of about 12 lbs each on cedar plug lures.They also landed 1 dorado of about 15 lbs on a petrolero lure and 1 striped marlin of about 120 lbs on mackerel, which they released. Still, 2 silky sharks took their mackerel bait, and they were released. They fished about 34 miles south, with anglers David and Leah from Texas onboard. November 20th, the 27′ BajaMark again landed a nice striped marlin, this time by Los Arcos, on mackerel released and kept 7 dorado, between 20 and 25 lbs each, which hit on feathers, ballyhoo and mackerel bait. 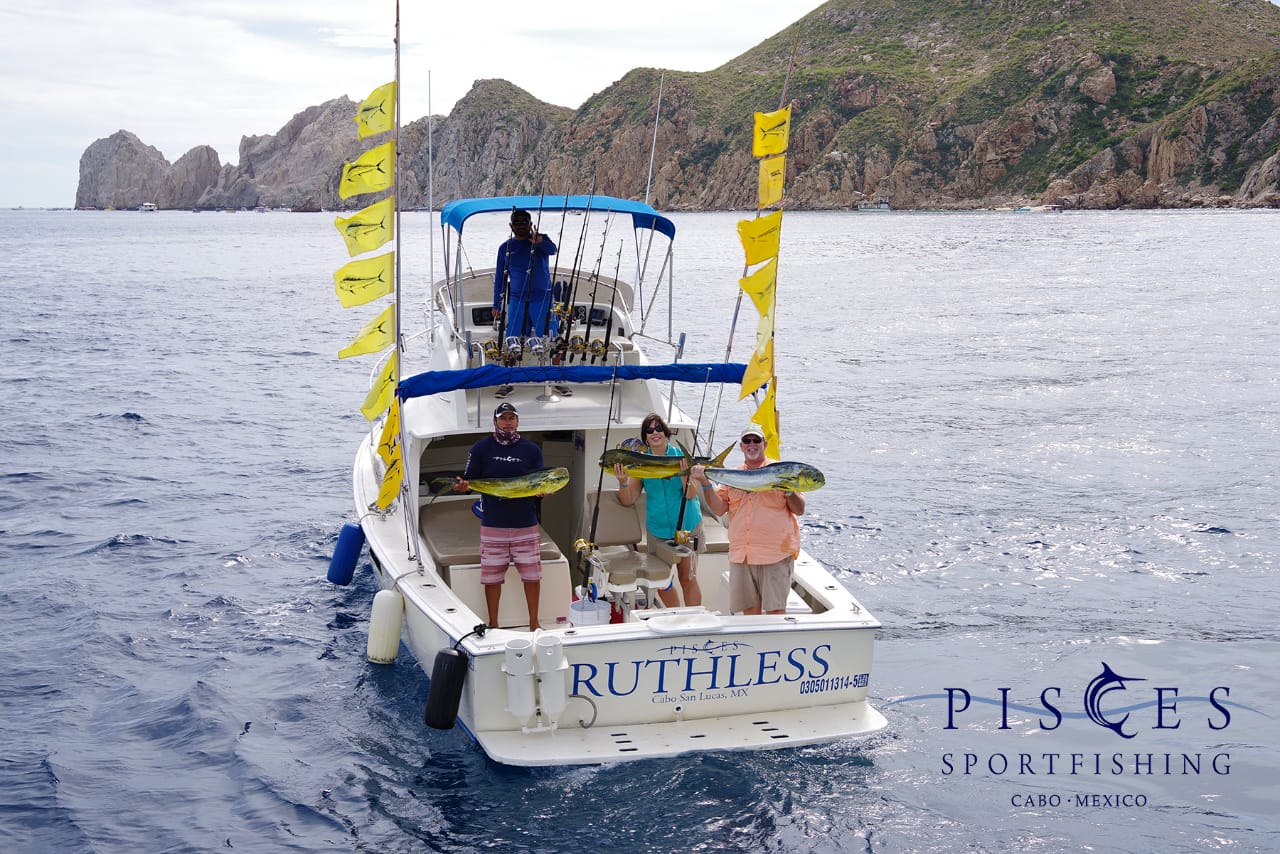 Pisces 31′ Ruthless found even more dorado, with anglers the McMullin’s catching 13 dorado between 15, 25 and 30 lbs each. These hit on feathers and lures: green/purple out between Migrino and Las Margaritas. A few days later, again the Ruthless impressed with 16 dorado caught, 9 released. All fish ranged in size of about 10 to 20 lbs.They hit out at Los Arcos on mackerel

Thanksgiving also brought success to Pisces 42′ Caliente, which headed to the Finger bank and caught and released an impressive 29 striped marlin! Anglers were Chuck, Elsie, Mark and Tom Fisher, along with Larayne Claussen. The day before this, anglers had landed 2 striped marlin at Los Arcos and another 9 dorado up to 20 lbs on ballyhoo there as well. Lucky angler Tim McCulloch also fished the Caliente earlier in the week and also landed 2 striped marlin out at the Old Lighthouse along with 8 dorado between 10 and 15 lbs each out by Los Arcos on ballyhoo and mackerel. 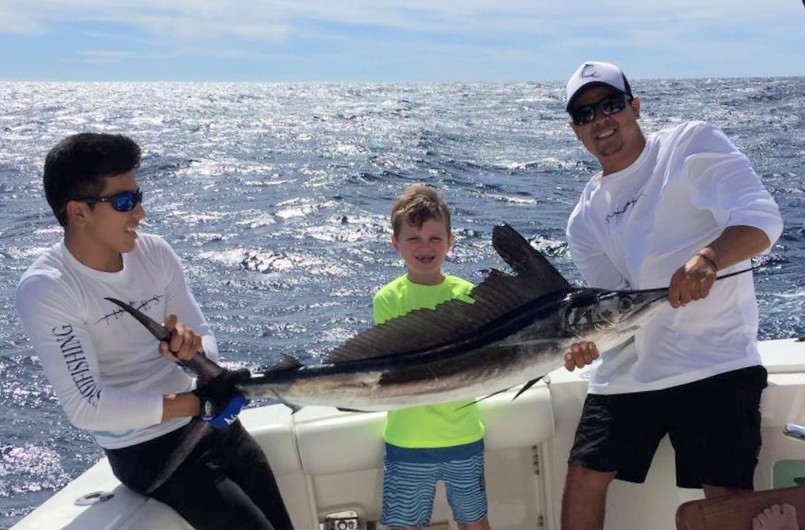 Last but not least, the new addition to our fleet, the impressive 52′ Cabo Free 2 Play made its debut with an impressive day of fishing, even though anglers only wanted to fish about 3 hours! Well, Free 2 Play made it count for Billy Gowen and Jay McGraw (yes, that Jay McGraw) who took their small children out for some fun. Captain Alan Garcia managed to find the kids some well-suited, pint-sized marlin, perfect for their first ones ever caught! They landed 2 marlin total, one of about 30lbs and the other about 50 lbs. These hit on ballyhoo at the Old Lighthouse. They kept close to shore and had fun with the small game, landing another 30 small fish which they released. 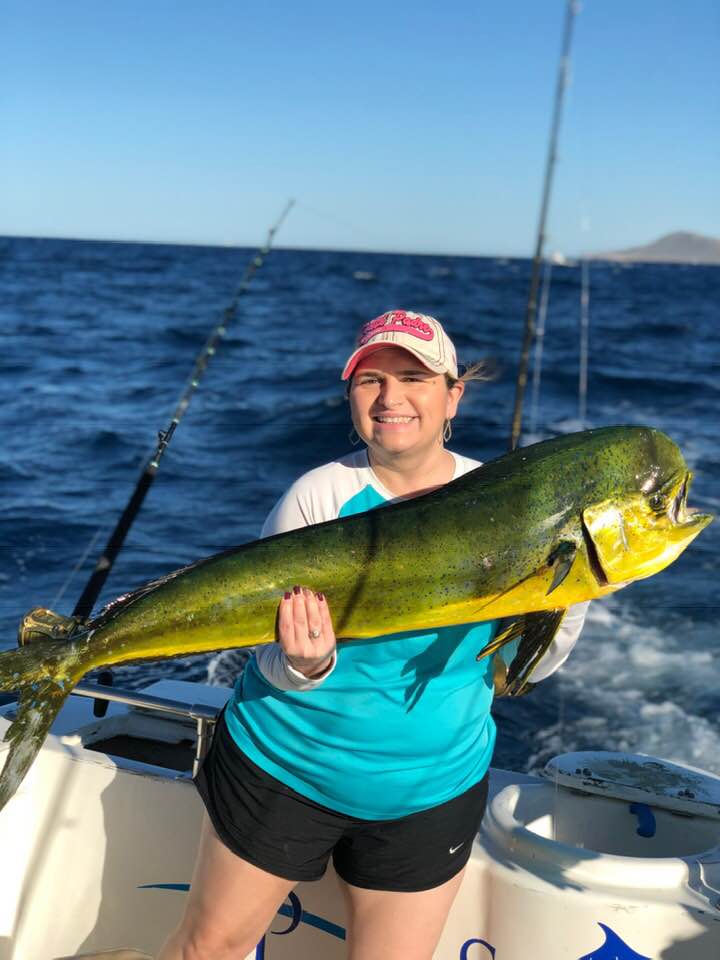 Awesome picture by Roel Huerta of their successful day on Pisces 28′ Adriana, 4 dorado caught and one striped marlin released.

AVERAGE WATER TEMP:Temperatures at the beginning of the week were slightly warmer, with a high of about 83 F, toward the end of the week we saw temps of about 77-79 F.