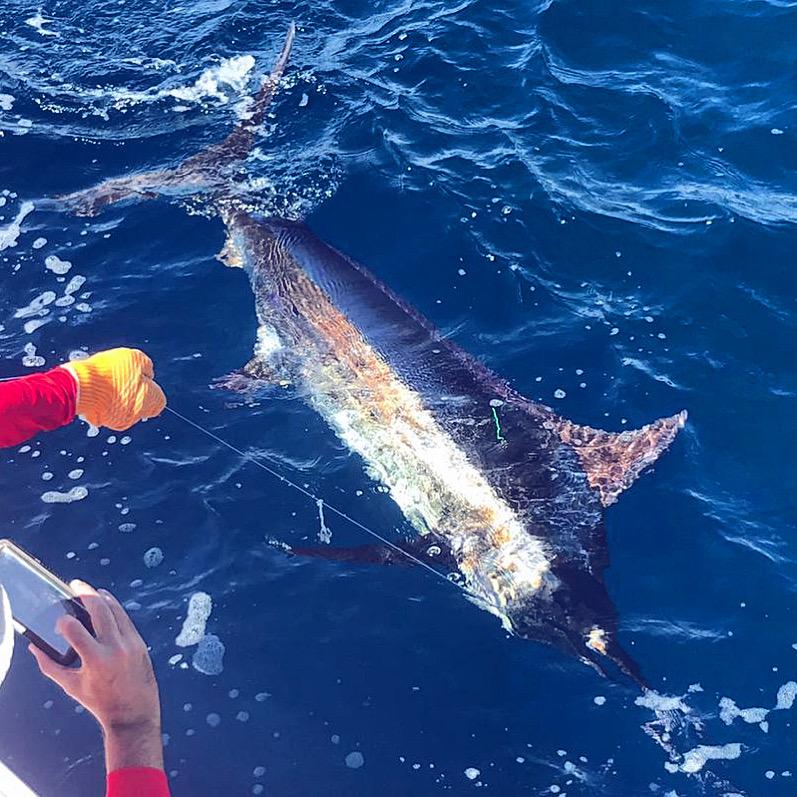 Incredible catch success rates this week, even with a limited number of fishing days due to port closing Sunday and Monday from tropical storm Raymond. Tuesday however, kicked off with a bang – with one tuna of around 120 lbs caught on Pisces 37′ Viking BBII, many marlin released, and as has been the trend, more dorado than we can keep. The rest of the week continued to produce good numbers in all species, including another FIVE BIG yellowfin tuna, all between 150 and 200 pounds, with 100 YFT caught total in the week. There were 409 dorado caught by 82 vessels, that averages out to about 5 fish per boat; some however, caught up to 20 dorado each. Pisces 31′ Ruthless for example, caught 22 dorado, plus Blue and Striped Marlin in the same day! Billfish releases totaled seventy-two; including blue marlin, black marlin, striped marlin and sailfish. Other catches included mainly wahoo, sierra, skipjack. 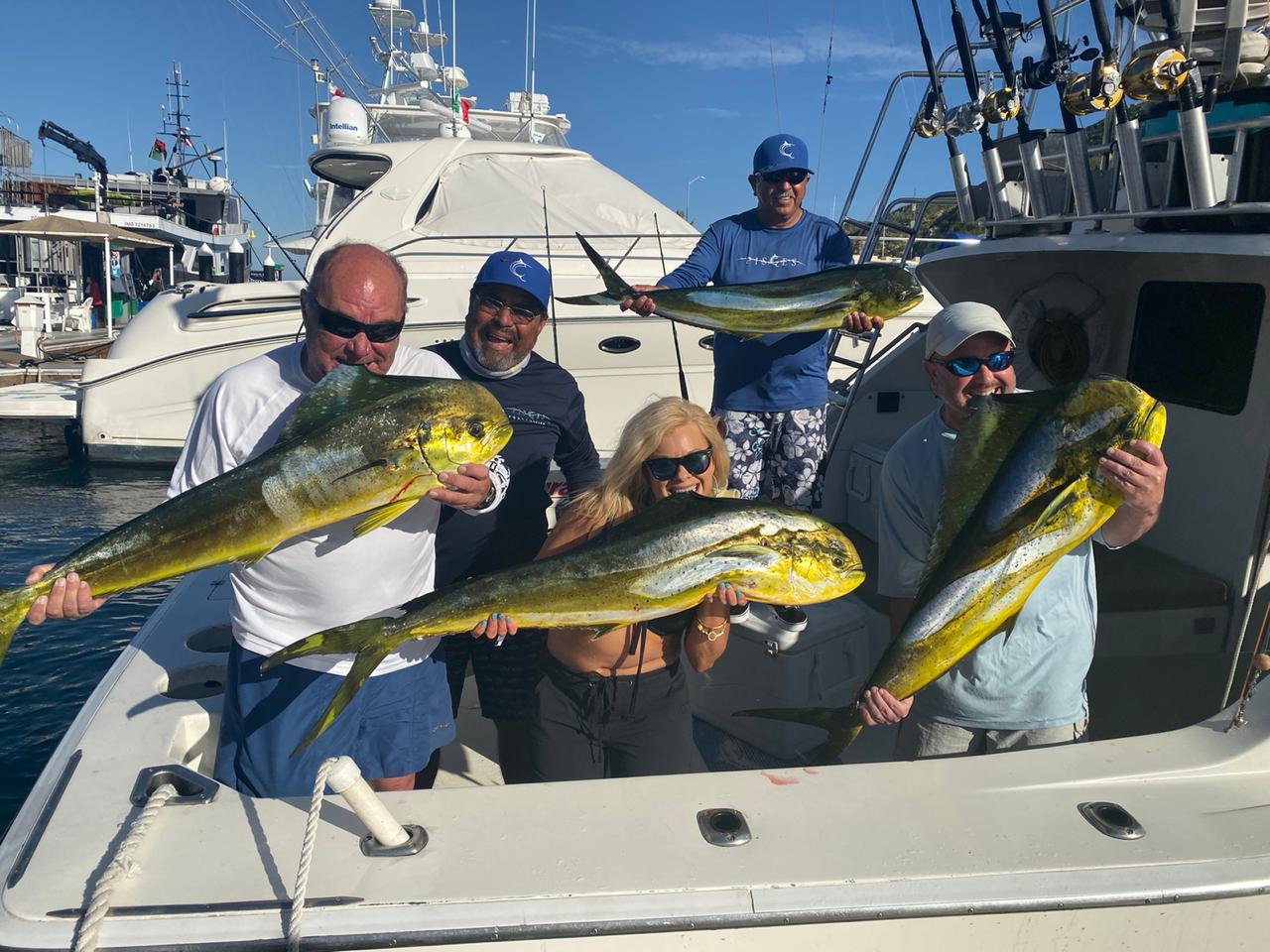 Pisces 37′ Viking Billfish, the BBII had a great week, with angler Kris Klosterman and friends from New York fishing 3 days aboard. Their total catches added up to 18 yellowfin tuna, including the 120 pounder that hit on the yummy and kite, 5 striped marlin, 1 sailfish, and 7 dorado. For billfish, they headed close to Golden Gate and used ballyhoo bait and to the 220 Spot for tuna; dorado hit on a mix of guacamayo and white/green lures. Yesterday, the BBII headed out for tuna once again, and produced big time with one 232 pound yellowfin, a few 30 pounders and two 60 pound fish. They headed about 40 miles south and caught the bigger fish on the kite, others on varied lures. 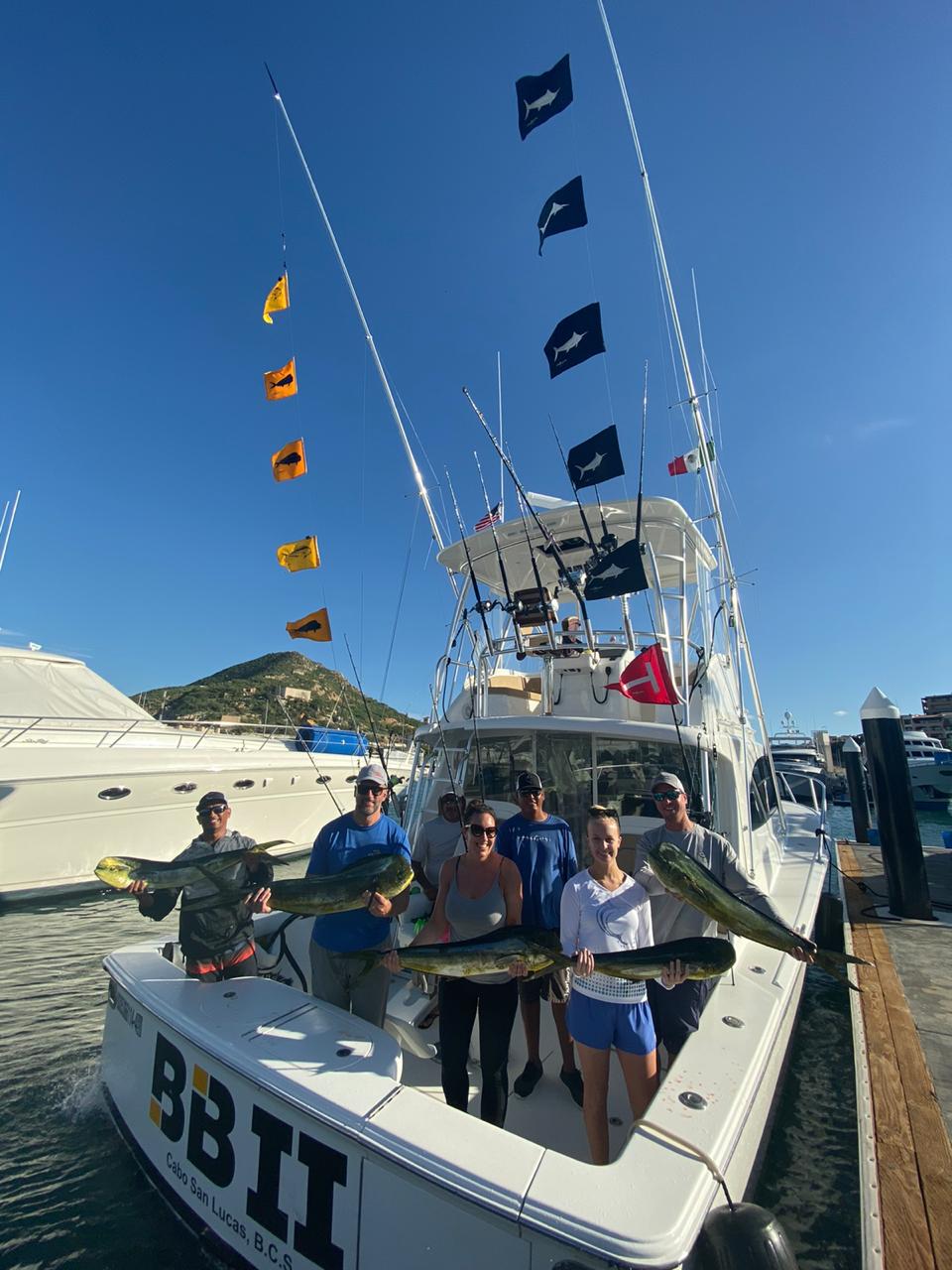 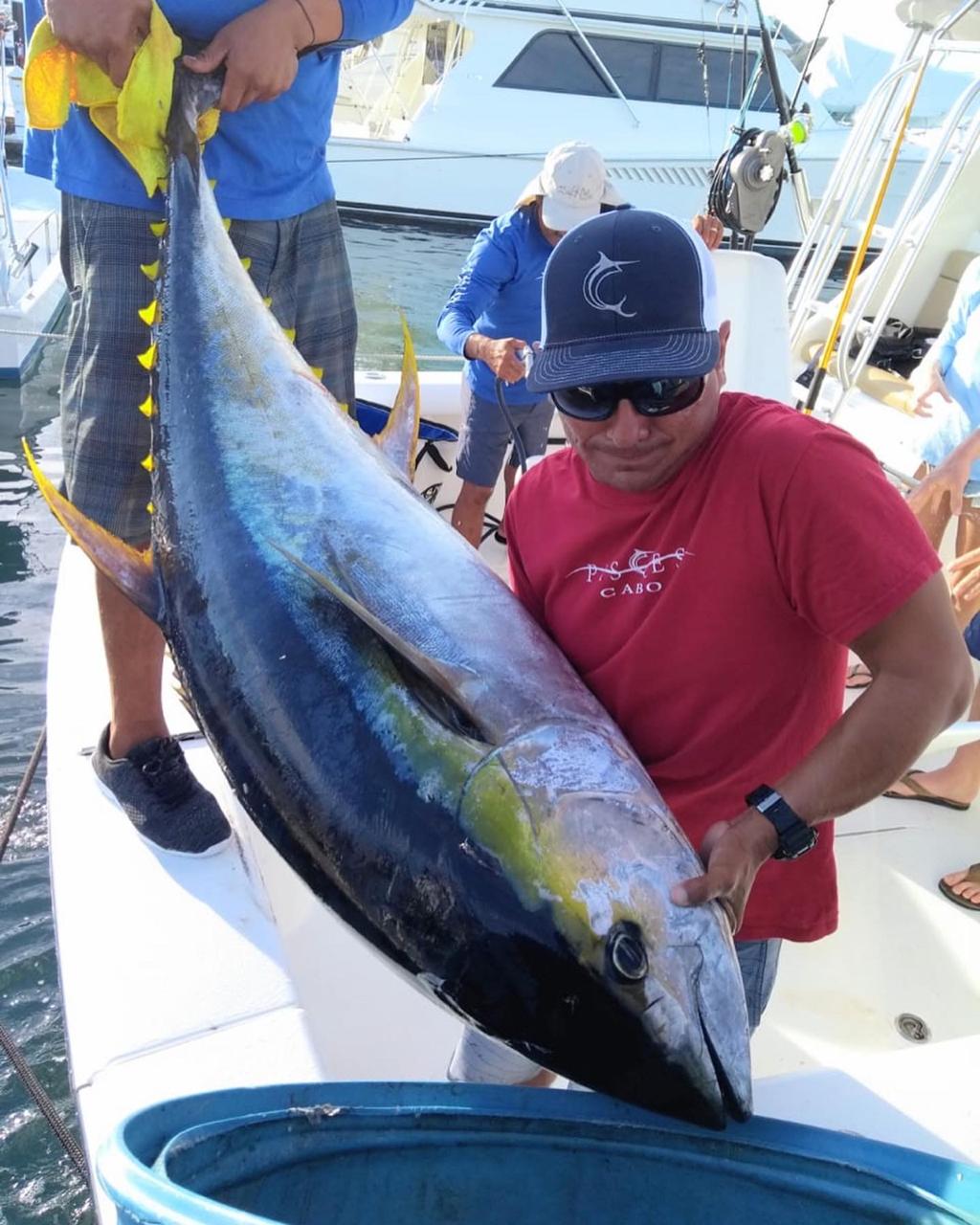 Pisces 35′ Bill Collector 2 had a spectacular day on Wednesday, with anglers from Victoria, Texas, Donald Goldman, Karen Barton, Bonie and James Hunt, Joe and Marilyn Nevlud aboard. The anglers all in their late sixties and seventies, did an amazing job at hooking three big tuna simultaneously. They fought them all for over an hour, but one of about 150 lbs broke loose. The other two were successfully boated, the 161 pounder caught by female angler Karen Barton, winning her Top Lady Angler in the Los Cabos Big Game Charter Classic and 2nd place for Day Two of the tournament. The winning tuna this day was an impressive 330 pounder! The Pisces anglers other tuna weighed in at 151 lbs. Fish were caught at San Jaime using squid and skipjack as bait. They also caught four dorado this day! Many of our boats placed in the tournament, and actually the 35′ Bill Collector 2 placed the previous day, in the wahoo division with a 39.1 pounder caught by Kevin Rodgers. Anglers from Colorado aboard also caught 1 dorado (15 lbs) and 5 football sized yellowfin tuna. The tuna hit at Golden Gate and the Dorado at Migrino on lime green lures.  For all tournament results, click HERE. 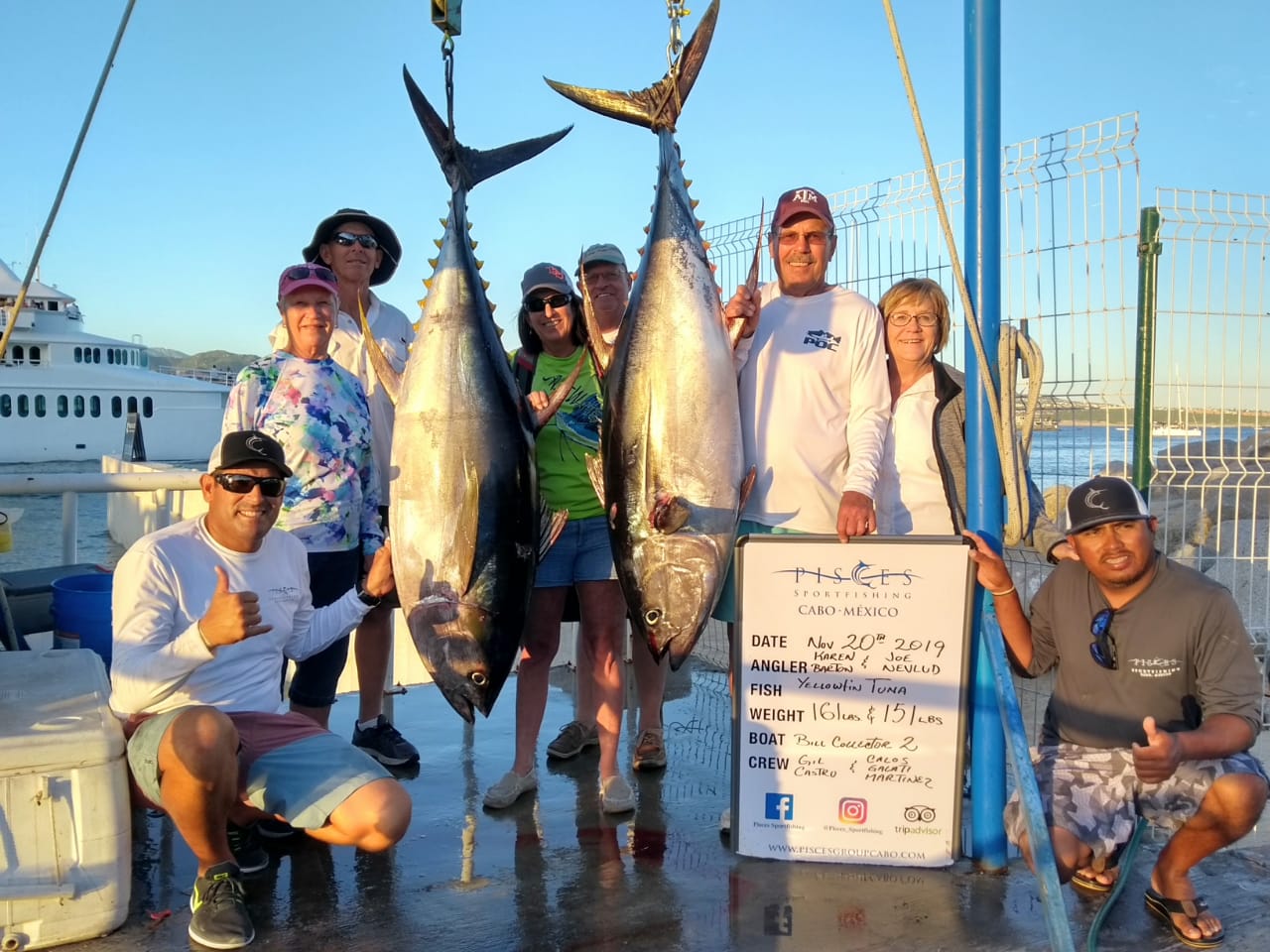 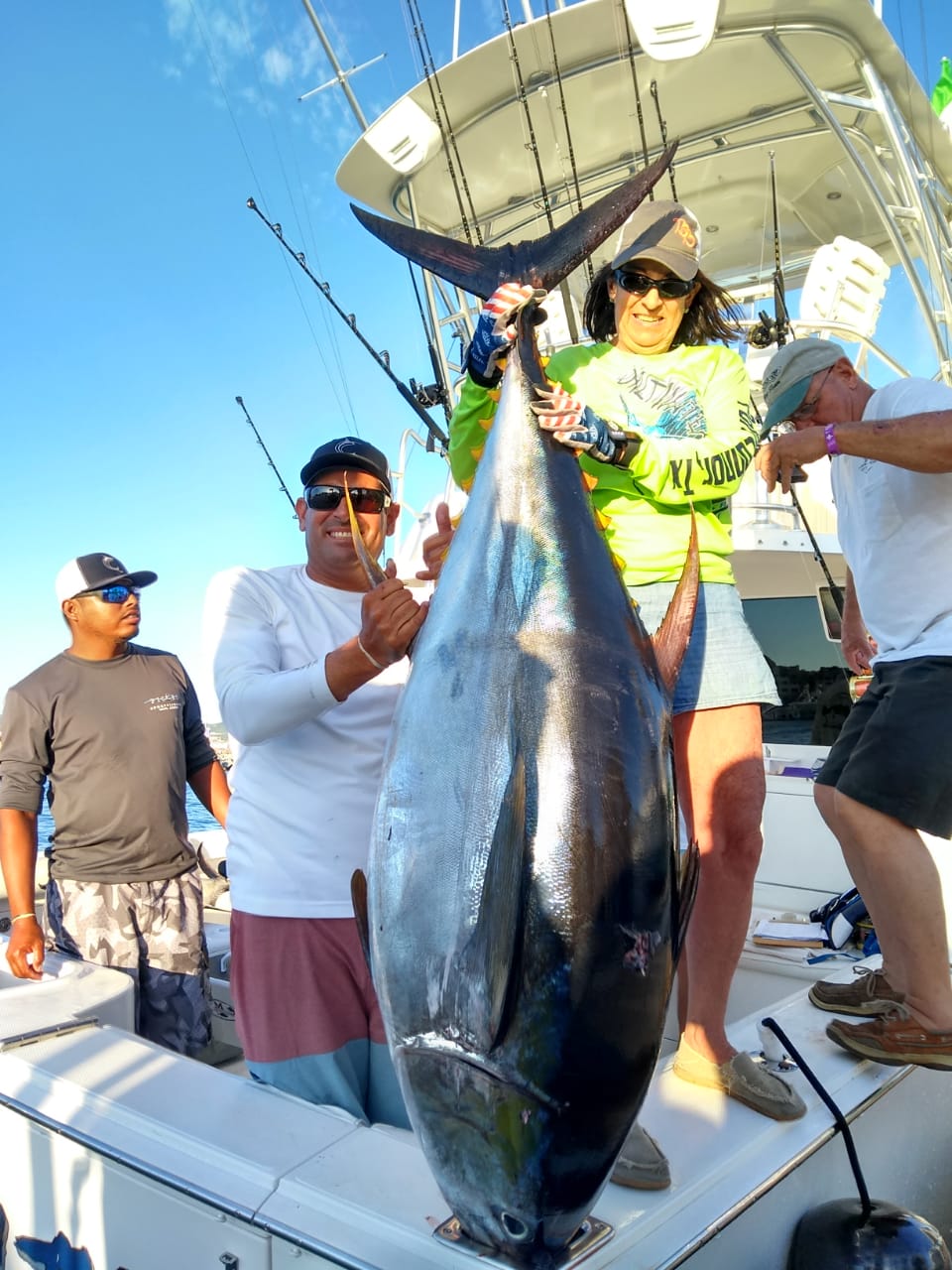 Pisces 31′ La Brisa landed a big tuna the next day, a 171 lbs yellowfin that hit on a green/yellow lure out at San Jaime for long time angler Bob Sancewich, along with David Sancewich and Donley Sowders from Seattle, Washington. They also released a small striped marlin on mackerel.

The previous day this same group of anglers fished on the Pisces 31′ Ruthless and hit the dorado jackpot, 14 dorado caught, but of course, respecting catch limits there were 8 released. Dorado hit on live and dead bait at Pozo Cota, where they caught 3 skipjack as well. Plus, 1 striped marlin released of about 120 lbs, which hit on live bait. And even more productive still, Pisces 31′ Ruthless caught 22 dorado the day prior (respecting catch limits) hitting on feathers, dead bait and varied lures, close to Las Margaritas. Not only this, but 82 year old angler Dave Kaminski successfully caught, tagged and released a nice approx 260 lbs Blue Marlin at Gaspareno. To top it off, friends Matt Gray and Jim Huson released a 100 lbs striped marlin as well. What a day! 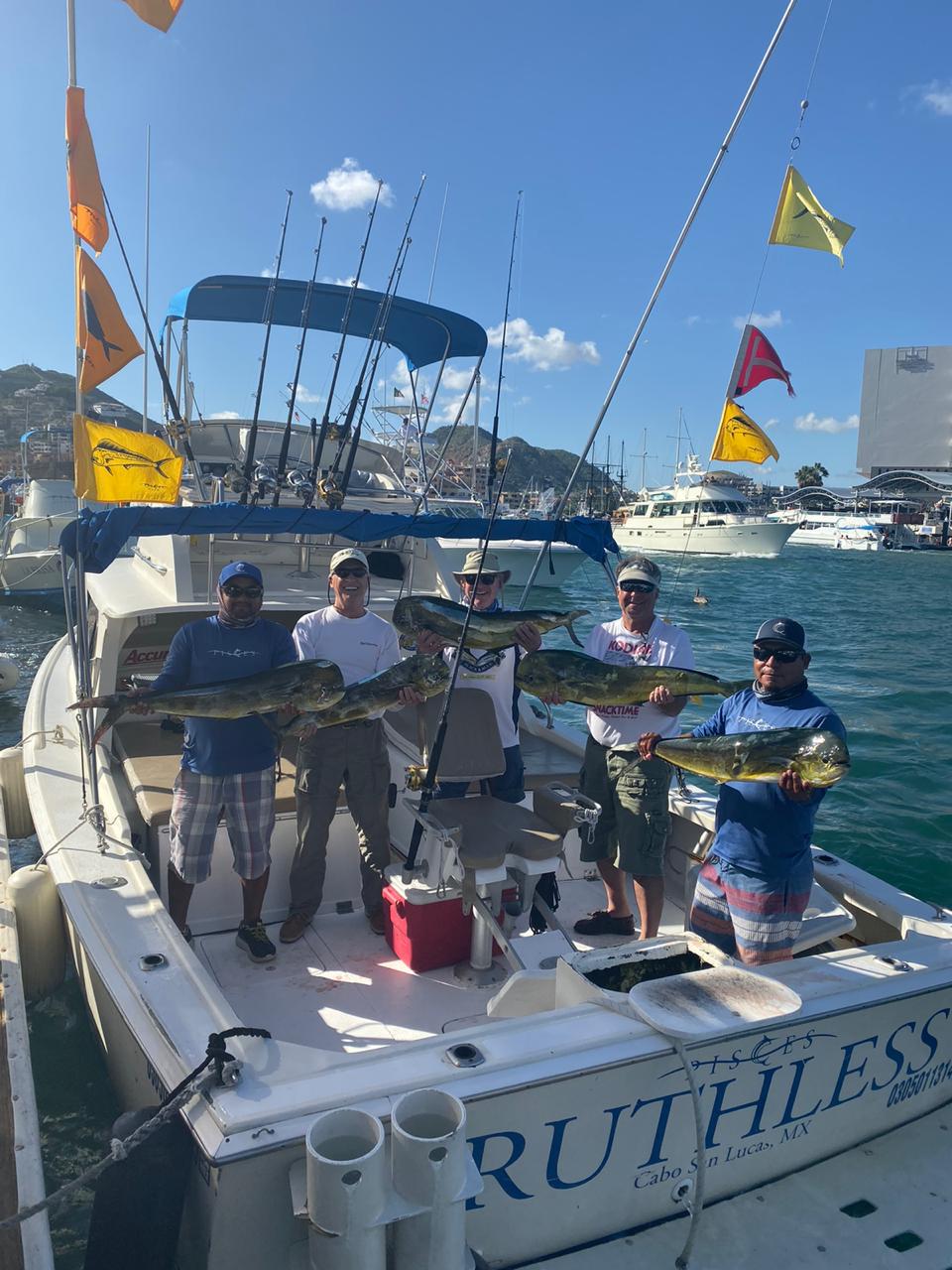 Jim and Matt then fished again on Ruthless on the 23rd, now accompanied by John Rebrovic, and released another blue marlin, just under 200 lbs, this time at San Jaime on mackerel. They also caught 7 yellowfin there, from 10 to 15 lbs each, hitting on feathers and cedar plugs. And still, another day fished with Ruthless brought them 10 more dorado catches, making Pisces 31′ Ruthless one of our most successful this week. 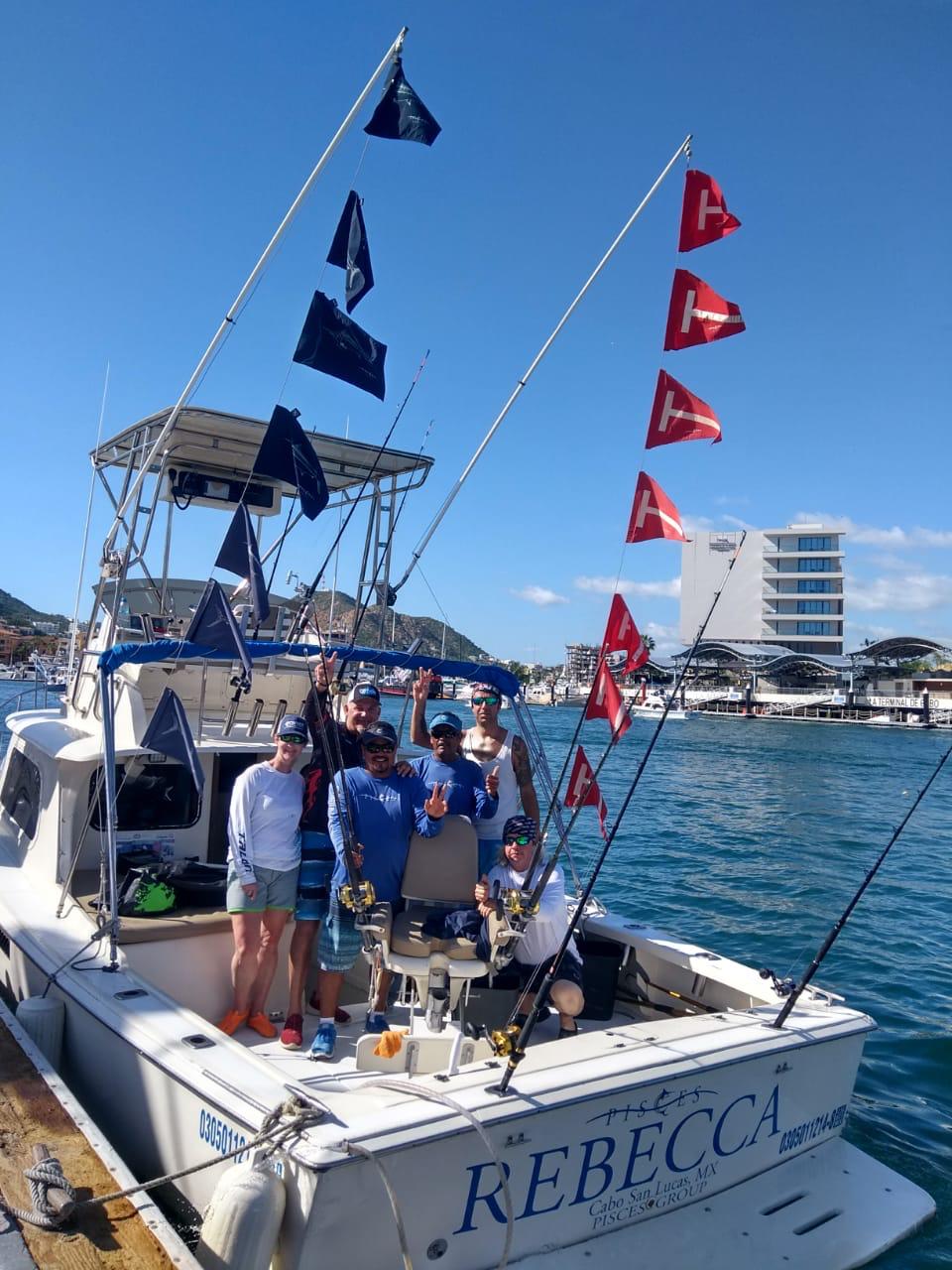 There were a few more blue marlin releases in the fleet, including 1 blue marlin of about 180 lbs released by our Swedish group of anglers fishing this week, headed by Anders Lundgren, aboard Pisces 31′ Rebecca. The group, including Eira Juntunen and Stefan Trumstedt also released 7 striped marlin on Friday, with fish averaging between 100 and 130 lbs each and hitting on live and dead bait at the 95 Spot and Old Lighthouse. One of the strangest catches of the week was on Pisces 31′ Tracy Ann, part of the Swedish group aboard, which included Anders Wemming, Jan Ard, Kjell Ljunggren and Mikko Petersen. They released 2 Striped marlin, but one of them had a very strange appearance. The bill was bent upwards, looking more like an elephant trunk! They also caught a nice dorado and 4 yellowfin tuna this day close to the Old Lighthouse. 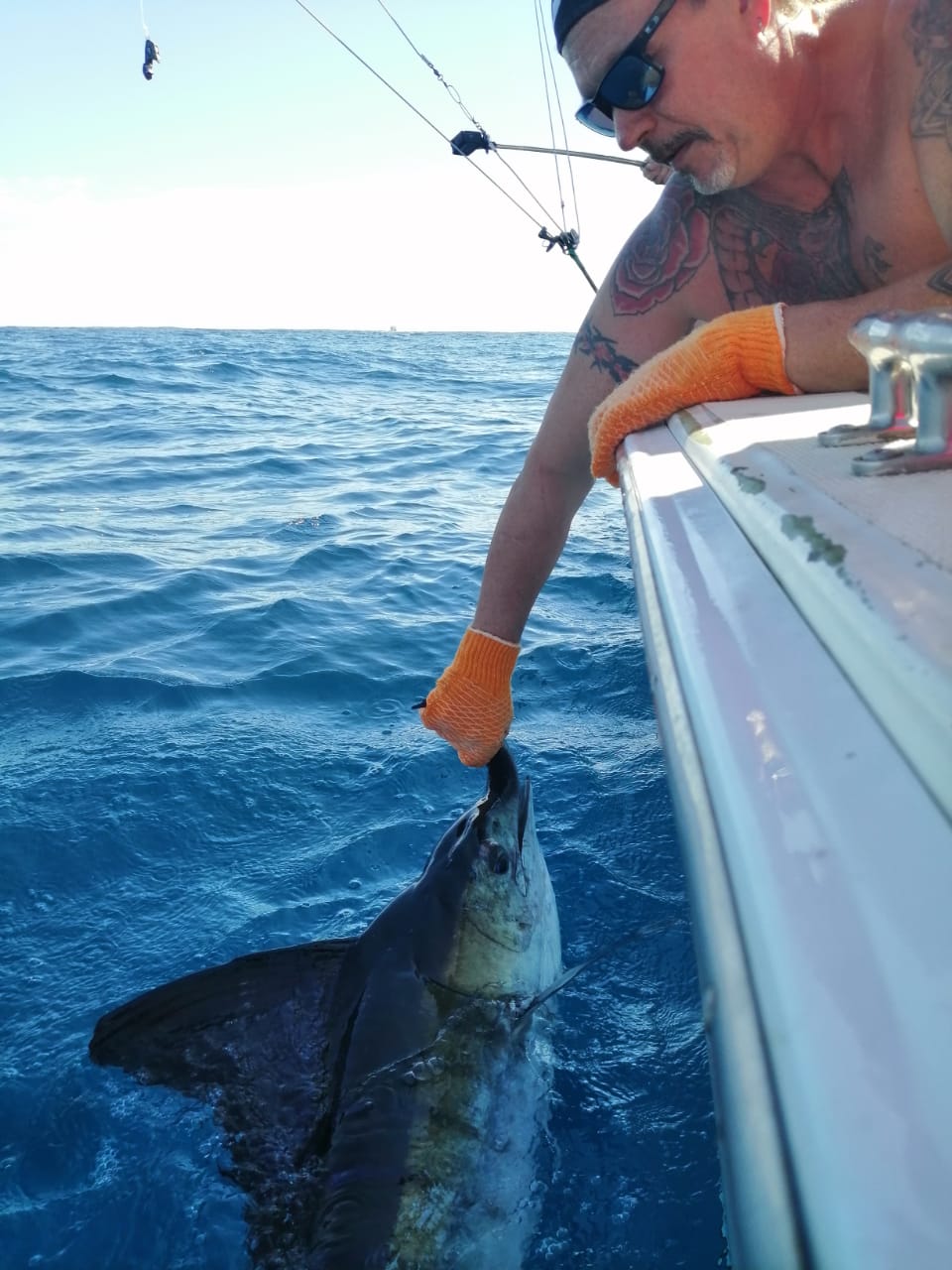 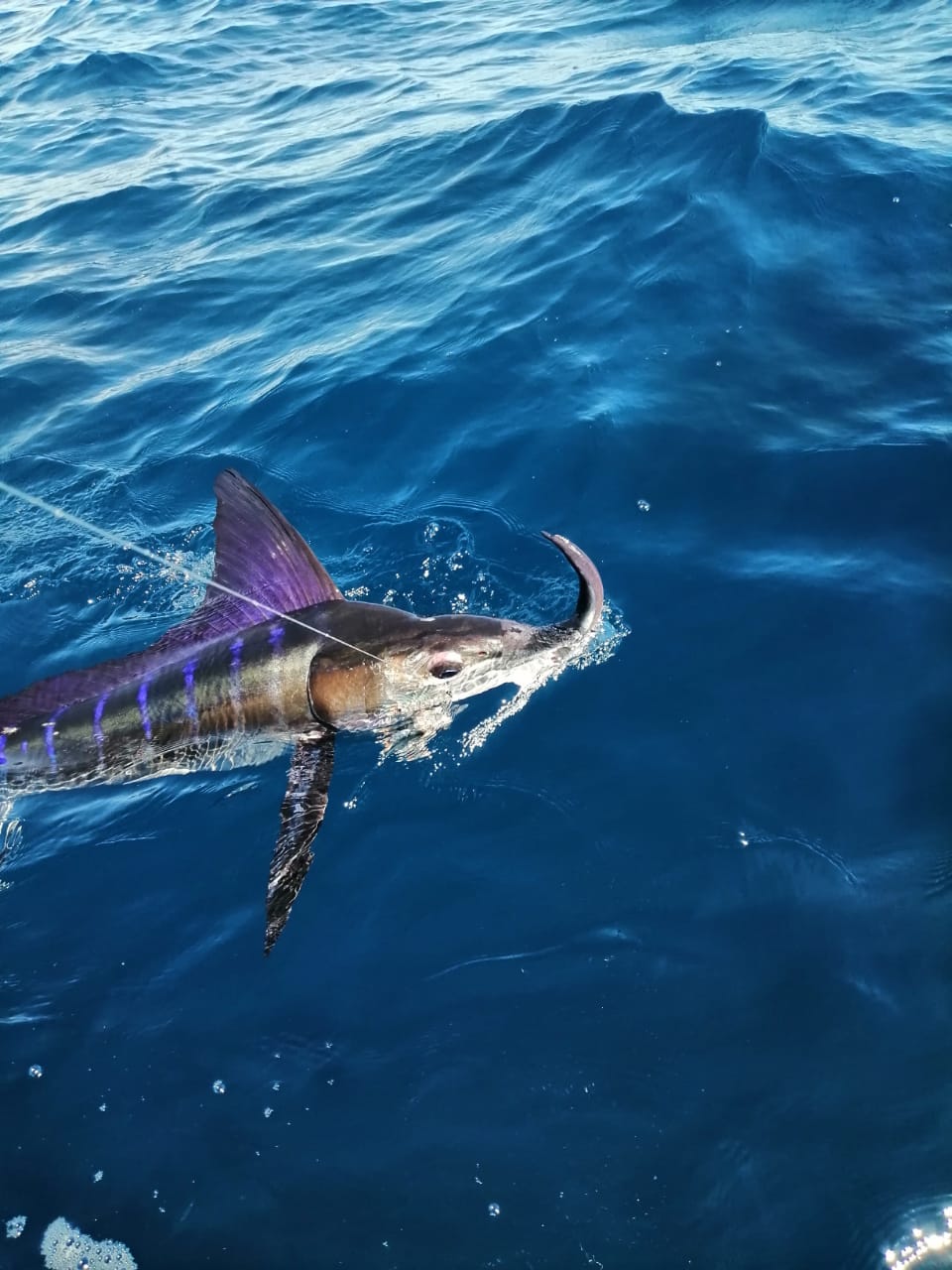 The strangest catch of the week! “Elephant marlin” on Pisces 31′ Tracy Ann

Another standout catch was a very nice 250 lbs Black Marlin released on Pisces 31′ La Brisa by Barb and Brian  Strajnic from Ontario. The fish hit live bait at Gaspareno, as did another striped marlin of about 120 lbs. To top it off they caught 6 yellowfin tuna on feathers and cedar plugs.

Pisces 30′ Karina has a good week as well, with 2 striped marlin, 7 dorado and 1 wahoo for Kim and Rachel Farley, and a very nice Spearfish released on another day along with some more dorado! Pisces 35′ Valerie with anglers David and Dena Elliot, Gary Owen and Kimerbly McDaniel fishing various days aboard had great catches daily, with 4 striped marlin released and 7 dorado on one of their best. 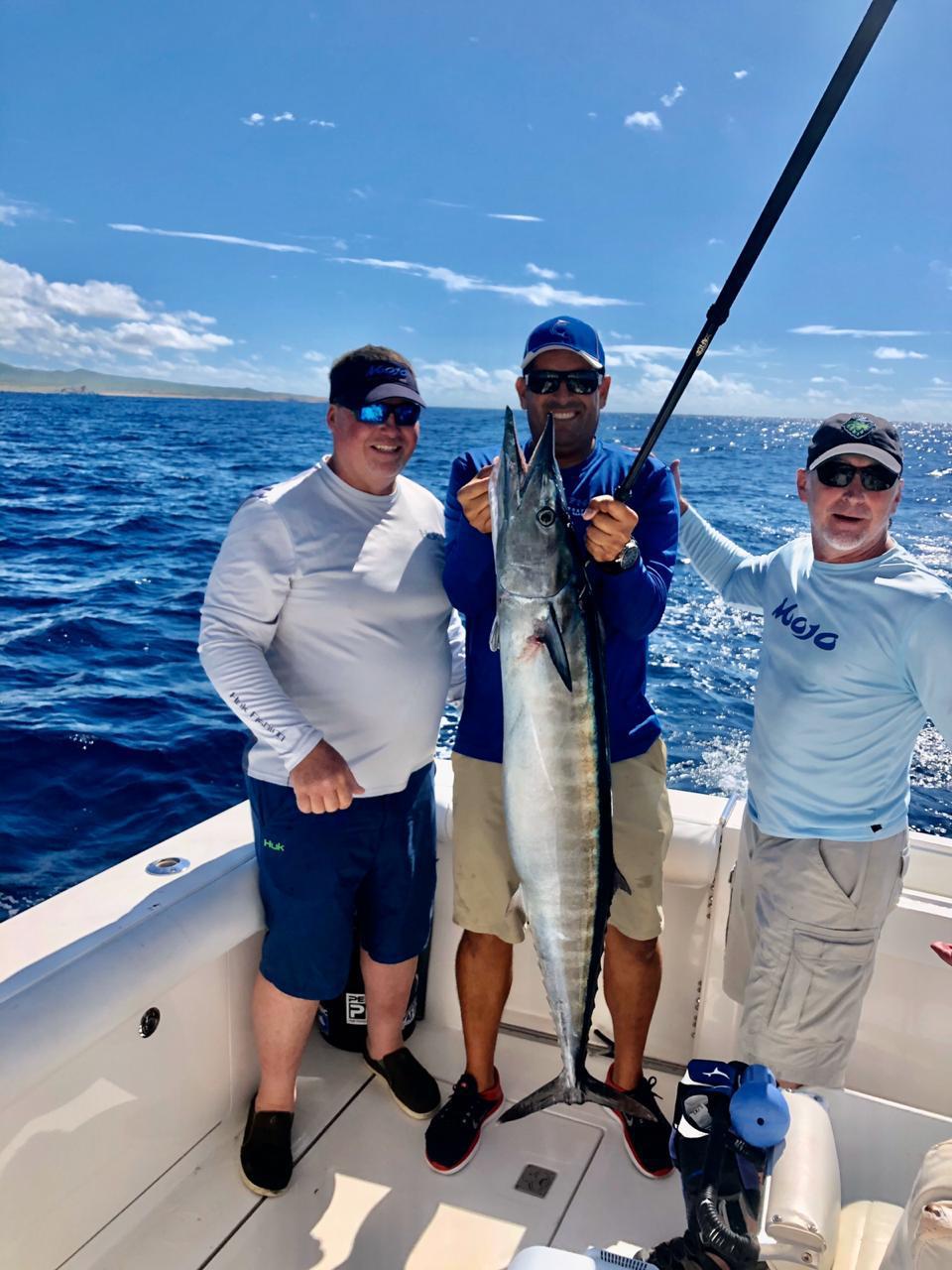