Billfish headlining this fish report once again, with catches of mostly striped marlin, but some blues as well. Boats still catching up to 7 marlin each on good days. Dorado numbers strong as well, but starting to dissipate much more now, and I am predicting the tuna will be picking up a bit by next week. Not many small game fish this week, just a few silky and mako sharks.

Top boat for marlin this week was the Pisces Billcollector with 9 marlin caught and released by anglers from North Oaks, Minnesota. They found their marlin out about 4 miles from the Cerros de Arena, and caught them on mackerel bait. The fish weighed approximately between 100 and 150 lbs.

The next day, Billcollector found luck again, this time with anglers from San Diego catching and releasing three marlin, all between 80 and 140 lbs, as well as one dorado of about 15 lbs.  The marlin landed on mackerel bait, while the dorado hit on caballito. All fish were found out in the Los Arcos area. 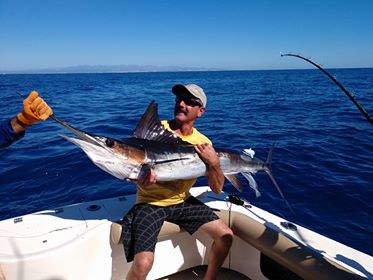 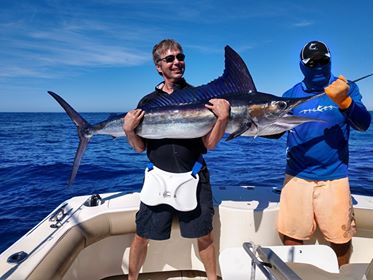 Anglers Charles Jenkins, Bruce Smith and Michael Lynn had a good striped marlin day (all released) on the Pisces Tiburon.

Not far behind on the marlin count though, Pisces Rebecca caught and released seven striped marlin of about 120 ad 150 lbs each. Anglers landed them on mackerel bait out of Golden Gate.

Pisces C Rod and anglers Mike an Adrienne from Michigan found themselves a nice blue marlin of about 180 lbs which they released, as well as six yellowfin tuna of about 15 lbs each. They landed the tuna on feathers, while the blue hit on mackerel bait. All fish were found out at the Cerros de Arena.

And with a few more dorado and tuna, as well as marlin, Pisces 35ft Valerie, caught three yellowfin of about 12 lbs with angler family, the Mankowskis, using sardines to land them out at Cabeza Ballena. They also caught a dorado of about 14 lbs. out from the Old Lighthouse as well as a small striped marlin which they released. Both hit on mackerel bait.

Total fish caught by pisces boats this week: 283. Of which, 117 were marlin, 94 were dorado, and 52 were tuna; with all catch limits well respected.