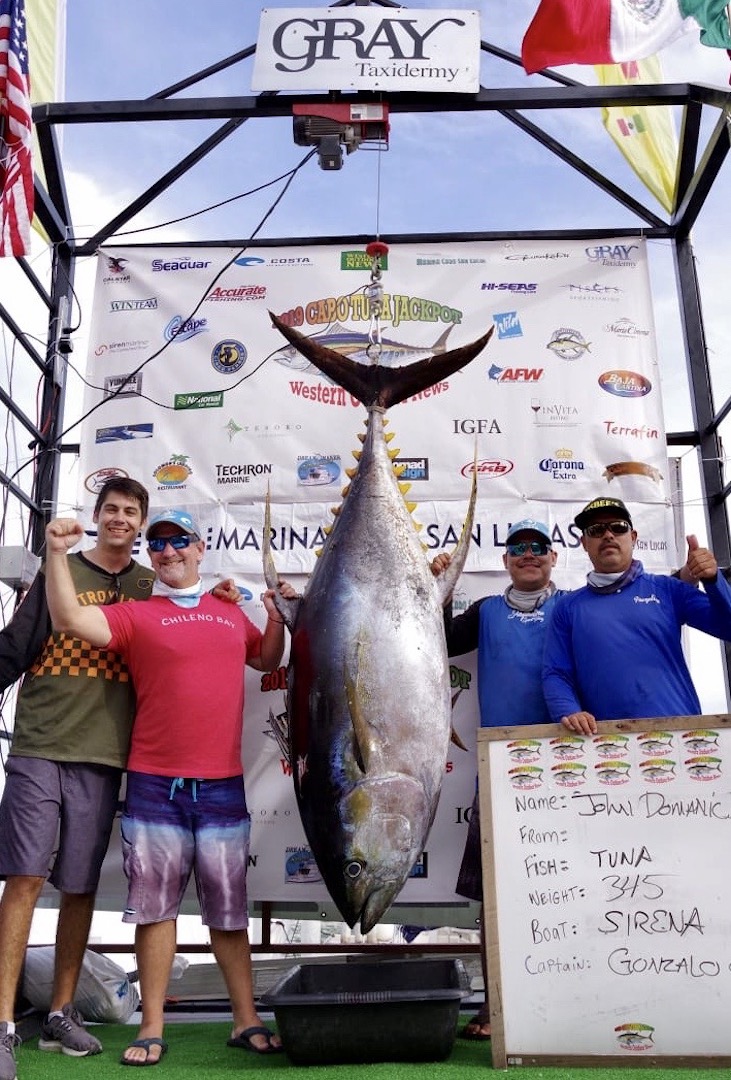 The winning Tuna at the Los Cabos Tuna Jackpot

This week not only brought great fishing, but it saw two important events for us in Cabo. The first was our 4th Annual Satellite tagging study on Striped Marlin with GrayFishTag Research and the second was the WON Los Cabos Tuna Jackpot. Both were very exciting and successful events – with three satellite tags deployed on healthy striped marlin weighing around 130 lbs each. Pisces did well in the Tournament with 5 of our boats hitting the dock with very decent fish. The Pisces 60′ Reel Machine weighed a 249 lbs yellowfin on Day One that had no way of holding up to the winning fish, but if caught on Day Two would have won! (1st Place on Day Two was a 248 pounder caught by Southern Comfort). The tournament proved to be one of the most exciting in its 21-year history; with one of the largest Yellowfin Tuna caught-to-date taking 1st Place Overall. There were about 30 Yellowfin over 100 lbs weighed, of which about 12 of them were over 200 lbs. And of course, the winning tuna was a whopping 345 pound super cow caught by angler John Domanic aboard Sirena, crewed by an all-local team, the Castillo brothers, Gonzalo and Freddy from La Playita and John Michael Schaible from La Paz. There were 218 tuna caught total for the fleet this week. 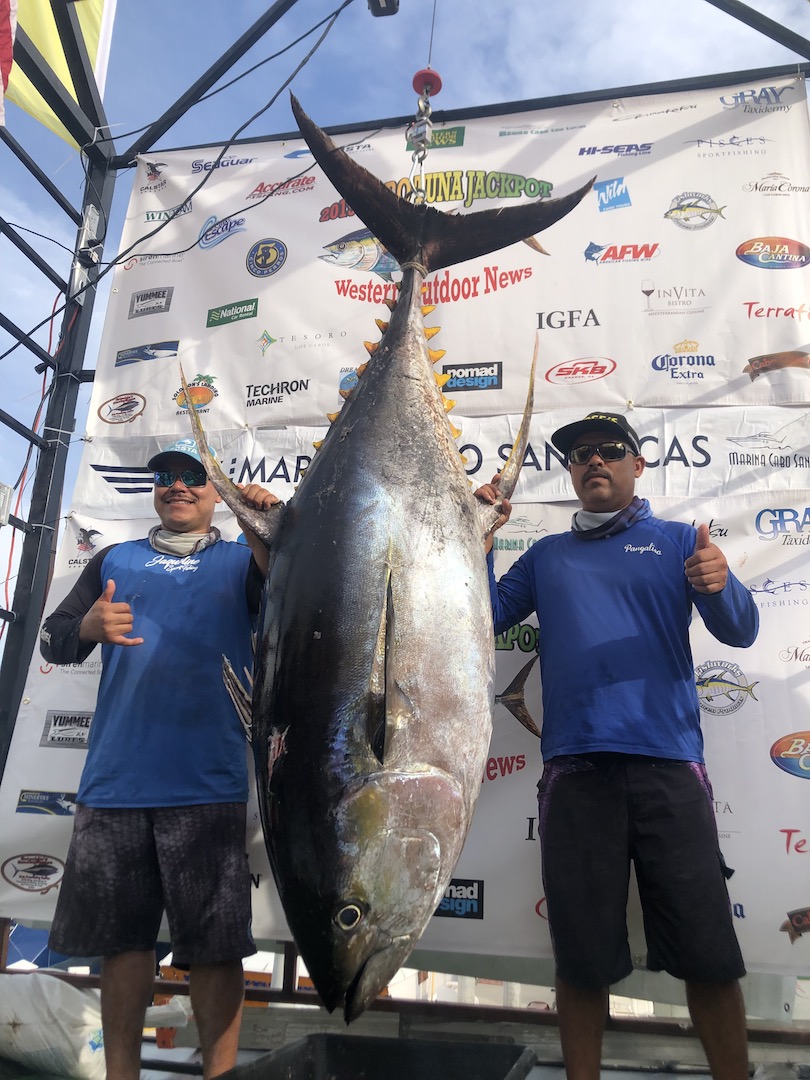 The Castillo Brothers with their Super-Cow Yellowfin Tuna,

Aside from this, marlin fishing was still incredible, with crews focusing on fish right off the Old lighthouse. This week, the billfish releases totaled 229 fish, mostly striped marlin but also sailfish and a few blues still around. The marlin became a bit more difficult to catch off of the Lighthouse, being “picky” eaters for the casted live bait that our boats targeted them with. Also, with the fishing being so good and so close by, the action and competition for marlin releases were fierce, as there were around 80- 100 boats fishing the area daily. Still the crews and anglers proved their worth, with up to 15 Striped Marlin released on the best days. Towards the end of the week though, we saw the marlin thin out in this area, but the dorado quickly moved in. To close out the week, on November 9th only, we caught 64 dorado, with a total of 204 fish caught for this week, respecting catch limits. And in other catches, it was very nice to see some wahoo coming through, again between 30 and 40 lbs each, and even a nice 50 pounder caught on Pisces 35′ Bill Collector 2. We also saw a few roosterfish for those that fished closer to shore on the Pacific. 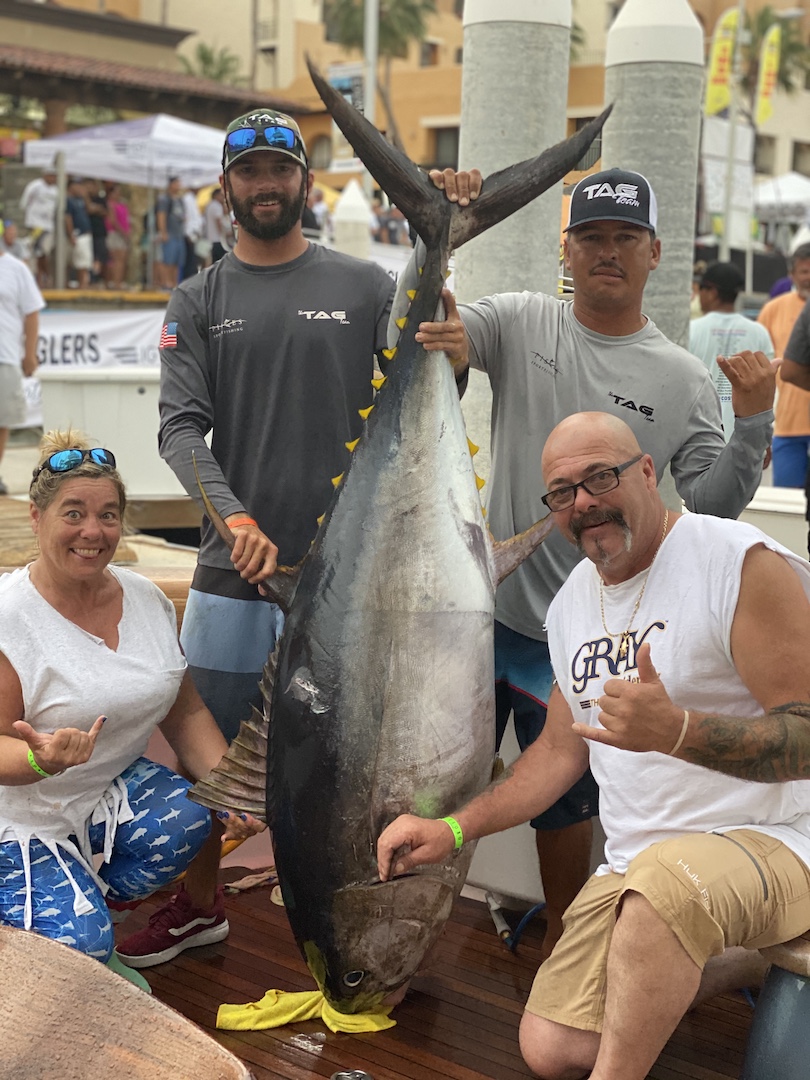 First, a little more on our Satellite tagging expedition.The tags were successfully deployed fishing aboard Pisces 72′ Tag Team, Pisces 60′ Reel Machine, Pisces 42′ Caliente and Pisces 40′ Chasin Tail. A total of 31 Striped Marlin were caught, tagged and released between all boats with another 30 Marlin spotted and/or raised at least, fishing right off of the Old Lighthouse.There were close to thirty people participating in these efforts who travelled from all over the world to be here. Participants from Mexico, USA, Costa Rica and as far as Papa New Guinea, including awesome players in the fishing world like Captain Dave Marciano from TV Show Wicked Tuna. People with the same interests and love for sustainable fishing.  And even with many boats fishing the Lighthouse area on this day, and being only a mile or two offshore, there was plenty of action: bait balls, birds diving, sea lions and schools of striped marlin on the surface. 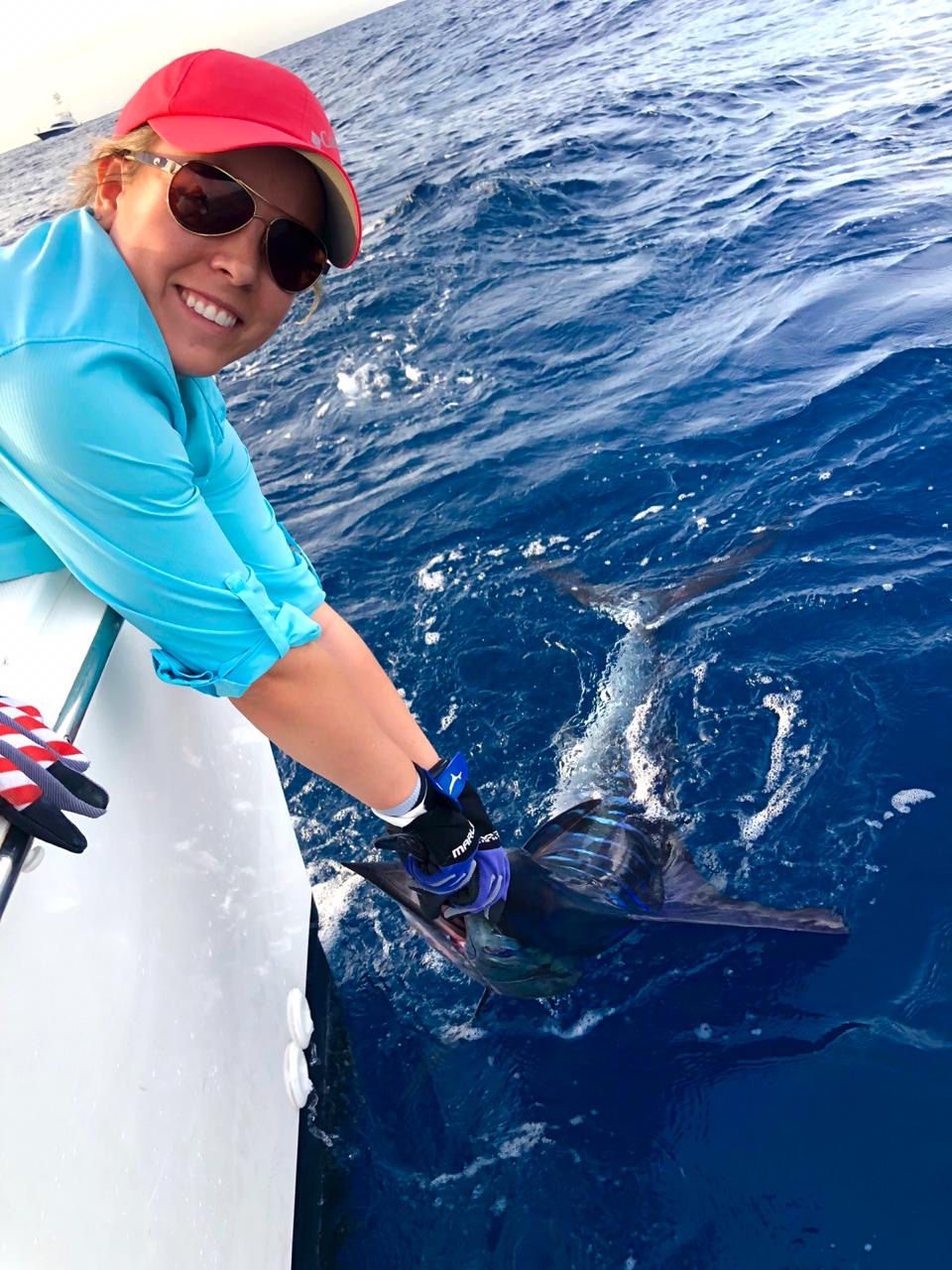 This is what makes Cabo a great choice for this much needed research; it is truly an incredible fishery found nowhere else in the world! This expedition was only made possible because of amazing people and organizations with a strong passion for fishing and conservation, no matter their background or focus. We are thankful for GrayFishtag for all of their efforts in research and conservation and of course to all the amazing sponsors: AFW, Costa Sunglasses, Simrad, Gamakatsu, Accurate Fishing, John Sercu, the Brackmann family, Victor Johannsen, Chasin’ Tail, Southern Most Apparel, and Seaguar. 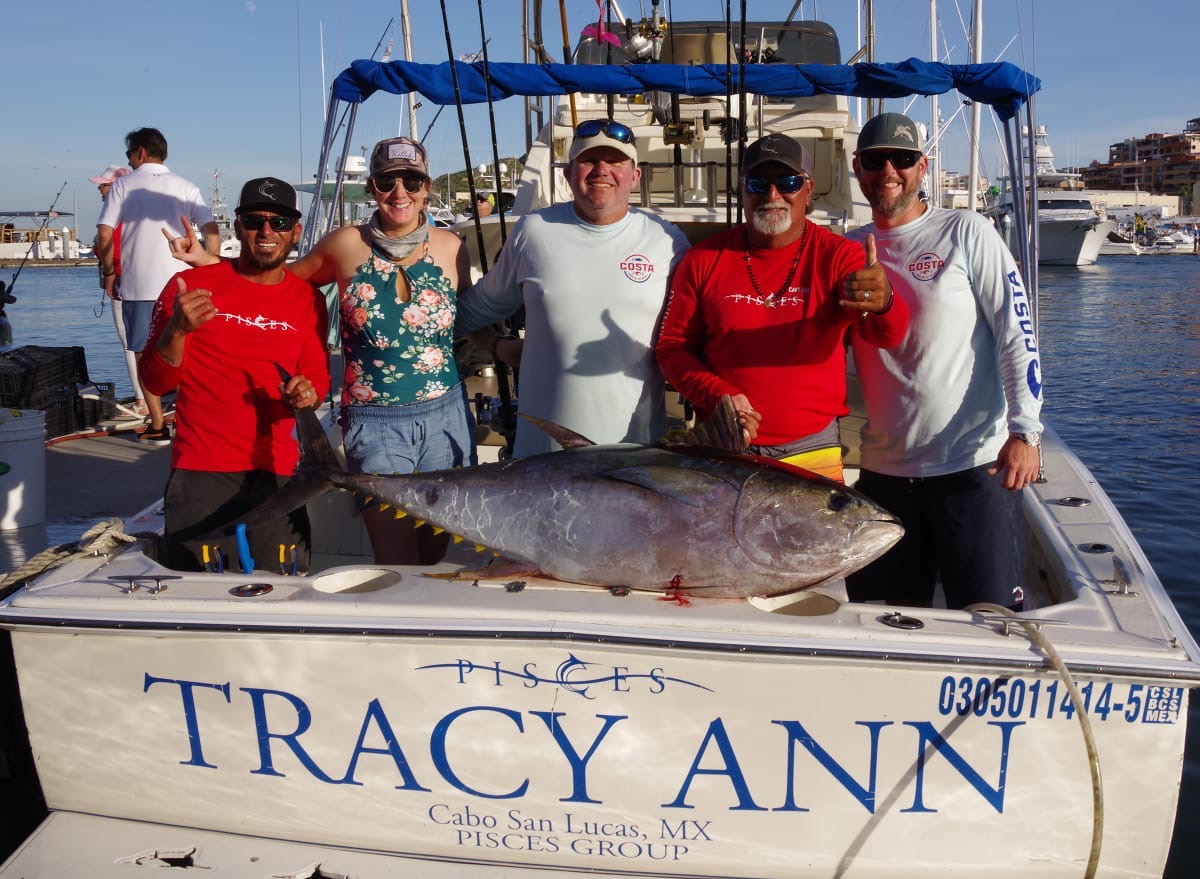 Tracy Ann with their 168 lbs Yellowfin at the Tournament

Pisces 30′ Karina did well this week too, releasing 6 Striped Marlin for anglers Les Elliott, Michael Dogali and Scott Duggan from Newport, CA. The day prior, Pisces 30′ Karina headed for tuna about 36 miles south and found 12 yellowfin of about 20 to 30 lbs each and a nice 87.5 pounder as well. The fish hit on cedar plugs and feathers.

Pisces 31′ Tracy Ann did well to release 7 Striped Marlin on one of their best days, and then hit the Tournament dock on Friday with a nice 168 pound yellowfin. Pisces 32′ Bill Collector caught 5 yellowfin, with the largest of 148 lbs for Angler Darrell Brock two days before tourney. 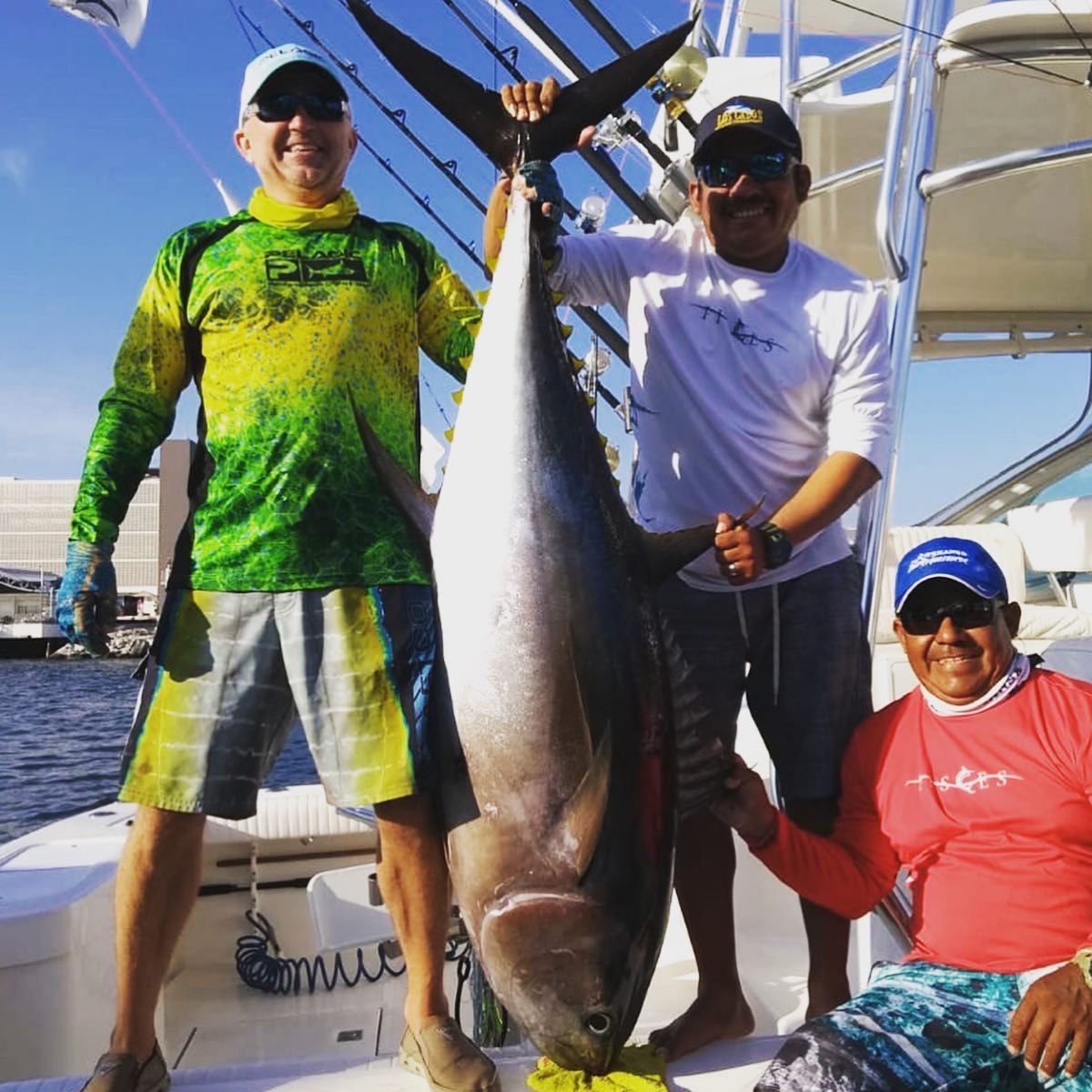 Pisces 60′ Reel Machine impressed with 100% Catch Success rate in their 6 days fishing this week. They released 20 Striped marlin total, had 6 dorado, and their scale tipping tuna of 249 lbs that hit on a lure at San Jaime. 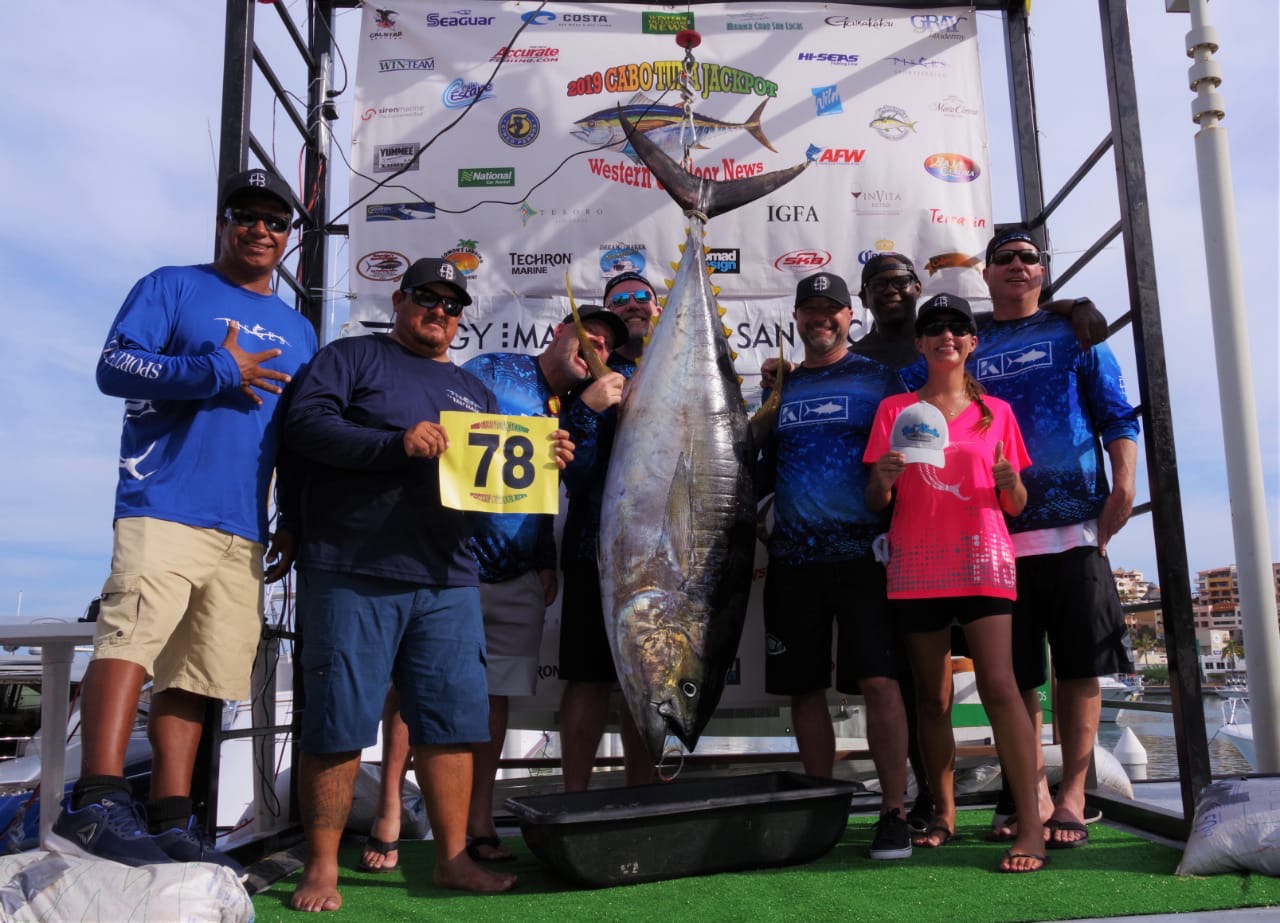 Pisces 60′ Reel Machine at the scales for the Tuna Jackpot,
with a 249 lbs YFT.

Pisces 72′ Tag Team also made it to the scales on Friday, with Angler Captain Dave Marciano landing a 185 lbs yellowfin which hit on live bait close to the 210 Spot.

Pisces 31′ Rebecca held the lead in the Dorado division of the tourney until the last 20 mins or so, with a 20.8 pounder caught by longtime Pisces angler Fred Vandenborek and friends the Timmer’s. Since no fish over the 30 lbs mark were caught the 1st day, the monies were rolled over and the weight limit reduced to 15 lbs. The winning dorado weighed 21.7 lbs caught by Outcast, and  took 80,000 USD, beating Rebecca by less than a pound! 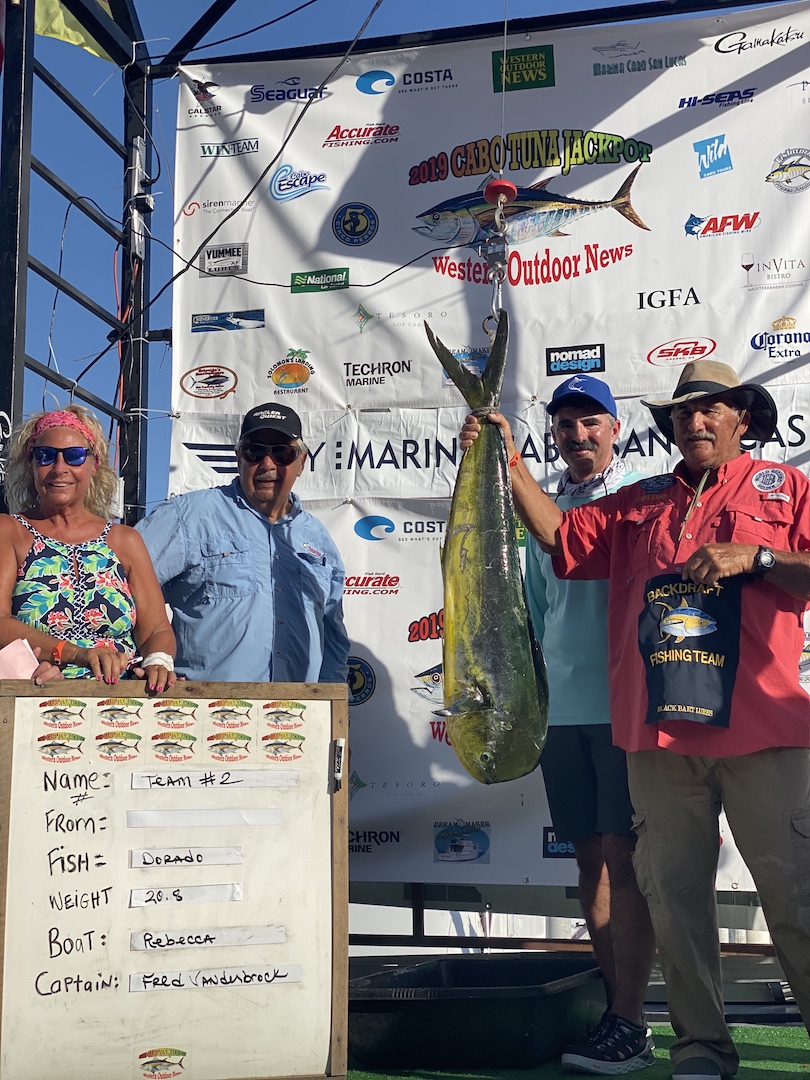 Fred Vandenbroek, a loyal Pisces Angler of more than 30 years lost the #1 Spot for the Dorado Division only 20 mins before the Tourney ended!

Pisces 35′ Bill Collector 2 weighed in a Tuna on Day Two as well, a 175 pounder caught on a lure at San Jaime. Impressively, anglers Josh Emmons, Katie and Robert Schad and Scott Solomon also had 6 dorado – hit on rapalas at San Jaime – and a wahoo of about 30 lbs, which they didn’t weigh as the winning wahoo hit 47.1 lbs on this day. 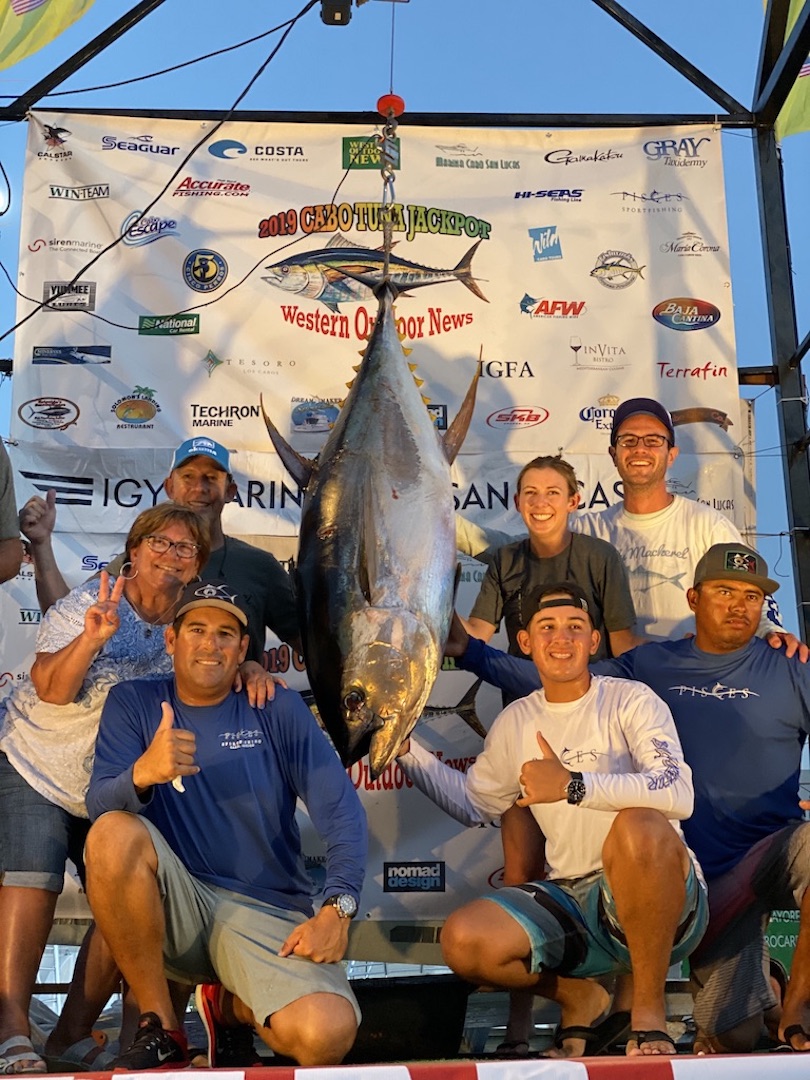 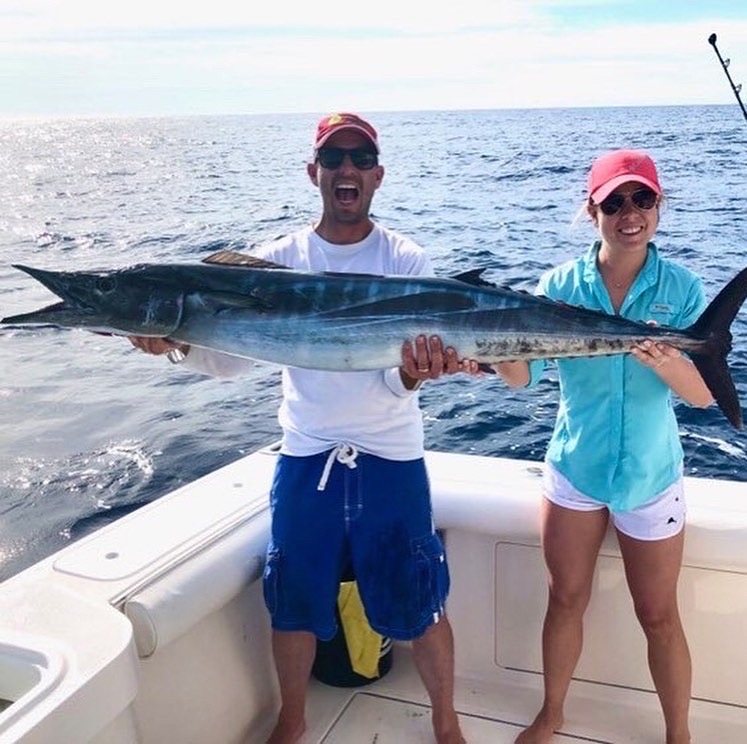 Throughout the week Pisces 35′ Bill Collector 2 (BC2) proved to be the top wahoo boat once again, with 3 wahoo caught for Alex and Ashley Kantor from Tallahassee, FL. The biggest weighed in at 50 lbs! These anglers also released 3 Striped Marlin and kept a 20 lbs Dorado – these hit on live bait at the Old Lighthouse and the wahoo hit on rapalas close to Cabeza Ballena.

Yesterday, Capt. Gil and BC2  did it again, this time with a 37 lbs wahoo for anglers Charles Lee and Minjeong Kang. They also kept 5 dorado which hit on lures and bait between the Old Lighthouse and Las Margaritas. To top it off they also released a Striped Marlin. 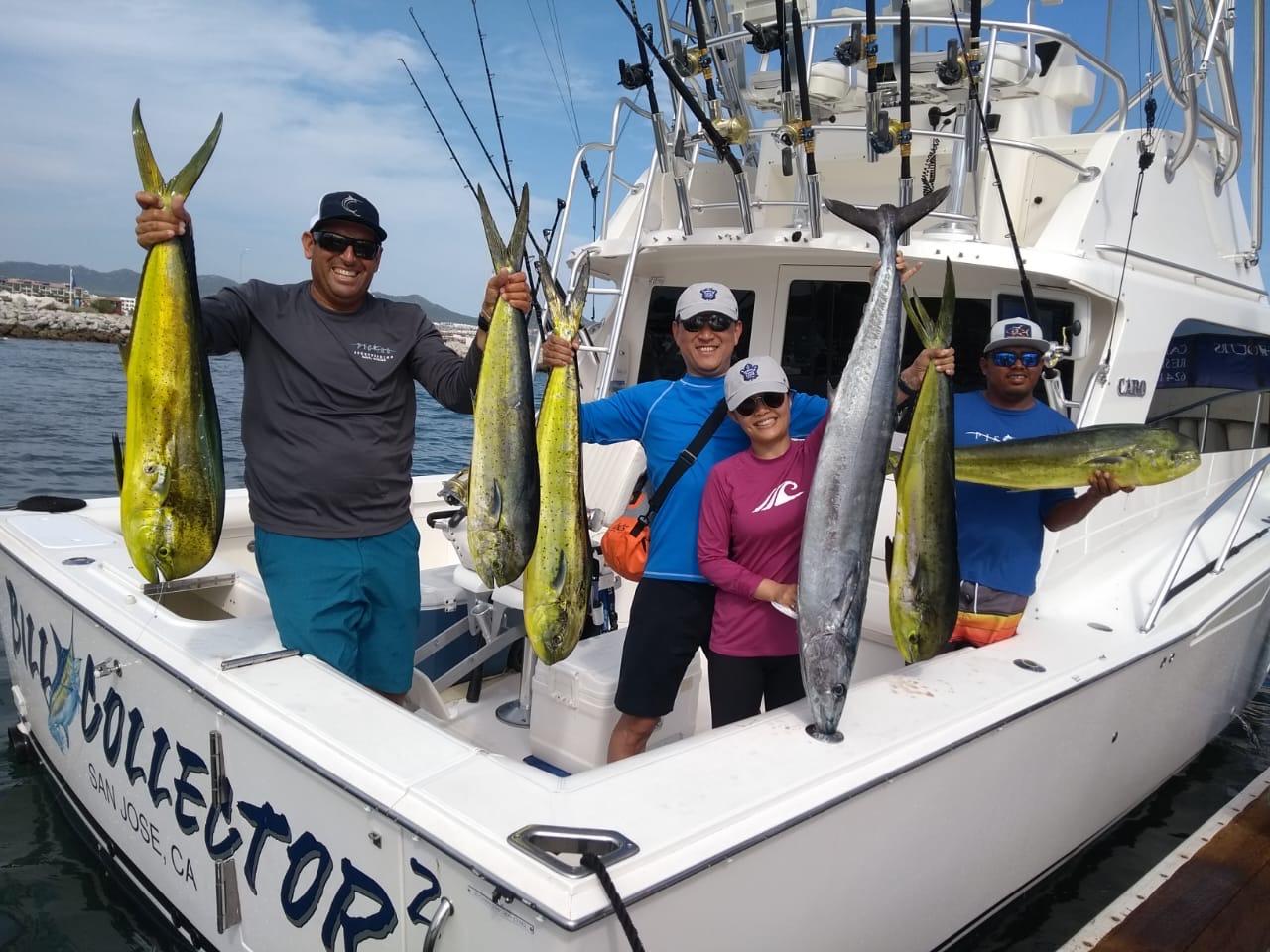 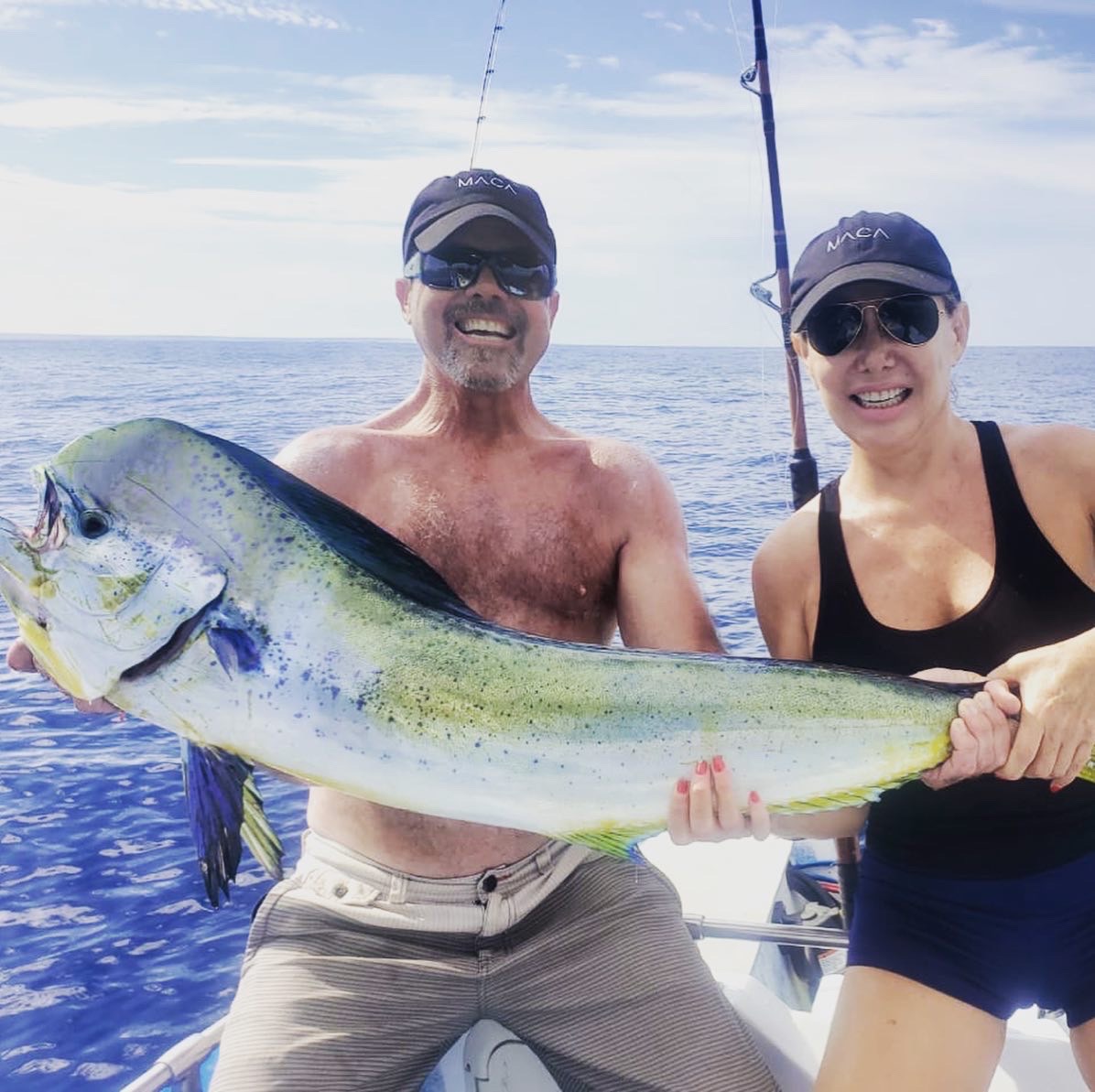 Last but not least, Pisces 38′ Speedwell had great catches this week, beginning the week, Nov 3rd, they released 1 Striped marlin, Kept 1 Yellowfin Tuna of about 90 lbs and released 1 Blue Marlin of about 180 lbs. These marlin were caught on dead bait, and the tuna hit a lure, all at San Jaime. Then they headed closer to shore and released 2 roosterfish of about 10 to 12 lbs each.

LOCATION: Pacific Side mostly from Old Lighthouse to Los Arcos for Dorado and Striped Marlin, 95 Spot, San Jaime and Gordo Banks for Tuna.