This week saw the start of two of our tournaments this season, first off, the Los Cabos Billfish Tournament and now, ongoing, the Bisbees Offshore Tournament.

A few of our boats entered the tournament, which saw 43 teams in total. We were glad to see our 38ft C Rod winning 1st Place in the Tuna Daily Jackpot division, with angler Bryce Schell from Canada landing a 146.80 pound yellowfin tuna. The fish landed on a green lure about 40 miles to the east of Cabrillo. They also landed at the same spot a blue marlin of about 280 lbs which hit on a petrolero lure and was released. 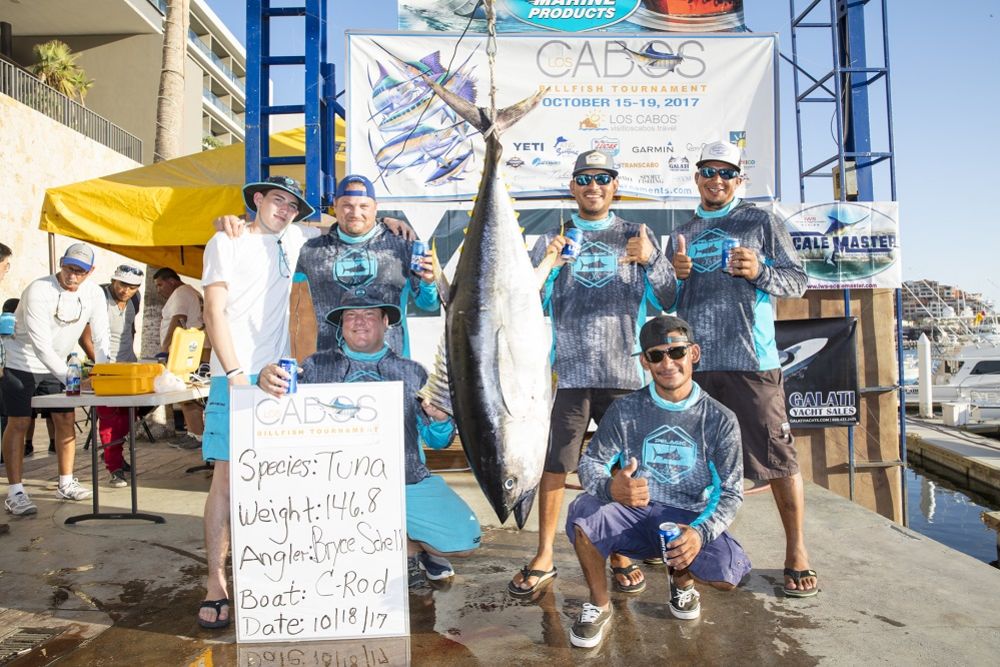 As for non-tournament news, the fishing this week still saw many dorado catches  per boat, as seems to be the trend this month, with the larger marlin starting to trickle in (as of course is influenced by anglers and captains specifically targeting these fish). Tuna were mainly small, except for our C Rod’s winning tuna and another 40+ pounder. Other species caught were mainly shark, a few roosterfish, and a few wahoo.

This week I would like to give a standing ovation to our 31ft La Brisa, who everyday had a notable catch! This crew is truly remarkable, Captain Ray Winkler and Deckhand Fernando Noyola are unstoppable it seems. Ray has been with us almost since the fleet began in 1978, joining the team around 1980. There were so many great catches by them this week, a total of 51 fish caught which consisted of 11 striped marlin, 3 blue marlin, 35 dorado, 1 yellowfin and 1 wahoo, that it is hard for me to mention them all, but below are a few highlights. I am also very happy to see that all but one marlin caught were released.

To start off the week, La Brisa and anglers Cory and Jennifer Roupe from Wisconsin caught two striped marlin out at Golden Gate, which hit on caballito bait. Both fish weighed about 150 lbs and were released. They went on to catch 15 dorado on different lures out at Los Arcos as well as a football sized tuna, about 10 lbs, which hit on a cedar plug lure. All this, and anglers decided to head back, landing on the dock at 1:30 pm.

The crew and anglers Brian and Vivian Rodick went on to catch 4 striped marlin the next day, which landed on mackerel bait out at Golden Gate, weighing around 100 lbs each. Three of them released.

Golden Gate continued to produce results for La Brisa as they came back the next day and caught 3 striped marlin ranging from 100 to 140 lbs each, which landed on caballito bait. They also caught 8 dorado of about 10 to 12 lbs on feather and petrolero lures.  Anglers were Alex and Nick Jurkiewicz and David Weber from Michigan.

Then, on the starting day of the Bisbees Offshore, La Brisa caught 2 blue marlin of about 120 lbs each which they released, that hit on a yellow lure and caballito bait out at Golden Gate once again. They also landed 3 dorado on feather lures and caballito bait. Anglers were the Coppeler family from North Carolina.

The next day of the tournament the crew and the Coppeler’s decided to look for luck elsewhere, heading to Cabeza Ballena area, and finding it! They landed two dorado of about 15 lbs which hit on feather lures, and even though they ended up using one of those dorados as bait, hoping to land a big blue marlin, it did hit, but on a chiwile  lure instead. The blue marlin was about 200 lbs and so it was released. They still went on to catch one 30 pound wahoo on a tiger striped lure. 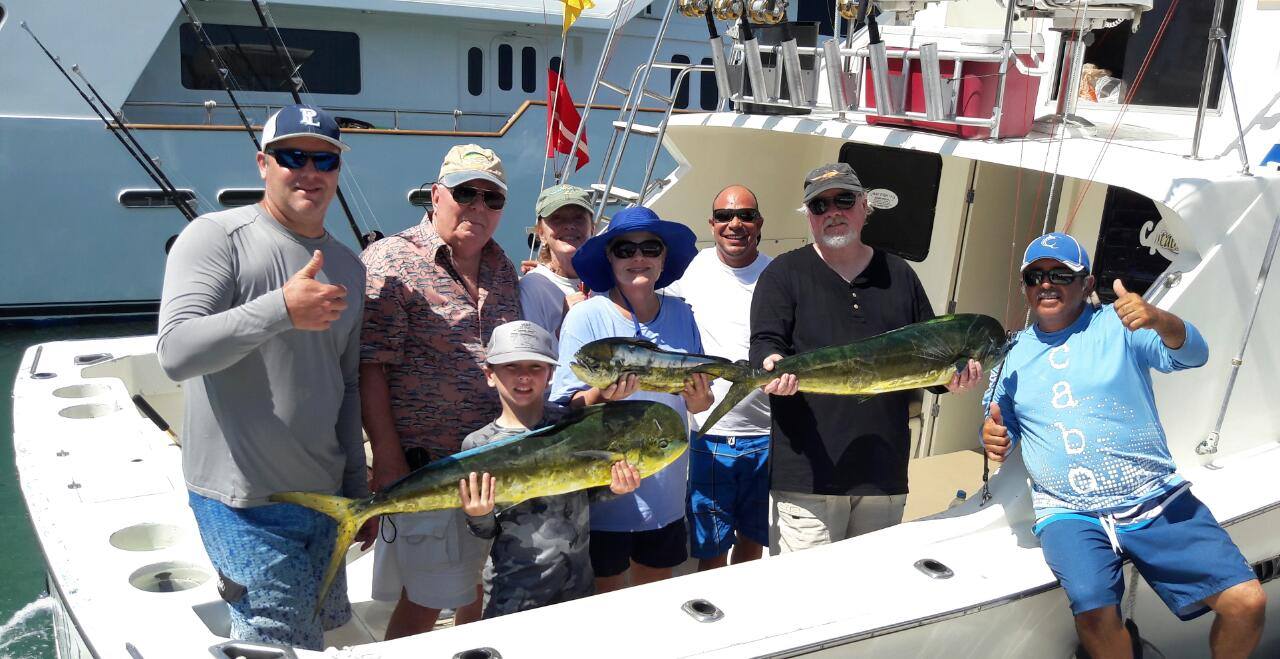 As for other catches, our 28ft Andrea also had great fishing; they started off the week catching 4 striped marlin, all released, of about 100 to 130 lbs each. These fish were landed on caballito bait, also out at Golden Gate. Then, heading to Las Margaritas area they caught 18 dorado of about 10 to 25 lbs which hit on feather lures and cedar plugs. Anglers were Doug Patton and James Harrigan from California.

27 ft Panga Tres Amigos also did well to catch 9 dorado from about 10 to 20 lbs each out at Los Arcos on feather lures and mackerel bait, with anglers Alan and Lizette Barton also landing a nice 42 lbs yellowfin tuna on a cedar plug lure.

Our other smaller panga, Salsa, did well with the small game fish as well, with anglers catching 2 dorado of about 12 lbs, 8 yellowfin tuna of about 10 to 20 lbs each, one skipjack (released) and one 80 pound silky shark which hit on caballito bait and was released. All fish were caught South of La Herradura.

WEATHER CONDITIONS: Clear skies, calm seas with a bit of swell picking up on Saturday only.