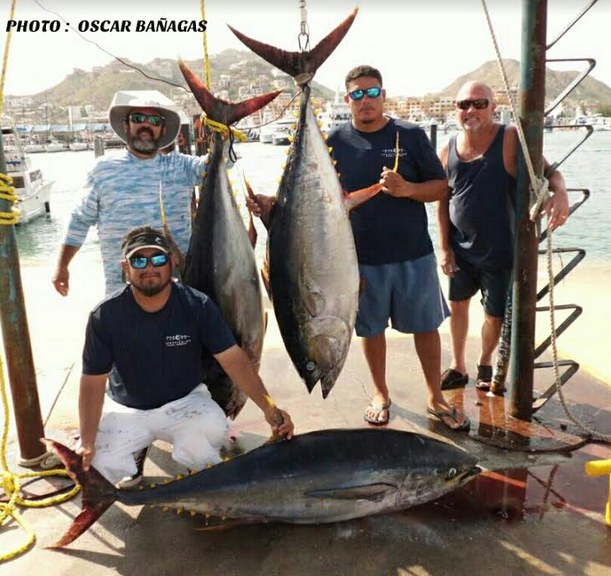 BILLFISH: This week saw two Bisbee’s tournaments hit town, with the Los Cabos Offshore, and the world famous Black & Blue. The top team was Quite?a, from Tampico, Tamaulipas on Mexico’s Gulf Coast; angler Julio Fernandez (whom Pisces exclusively interviewed), brought in a 534lbs black marlin on the second day of the tournament. Although we will be covering the tournament story separately in its own article, so that we can focus on the spectacular fishing that yet again has been going on during our regular fishing trips. We saw some boats come in this week with multiple marlins on board, and many different species of billfish. From black, blue and striped marlin, to sailfish and even a spearfish, the only one missing to complete all possible billfish would have been a swordfish. The week started of right on the 15th with an impressive five striped marlin caught and released on the Pisces C Rod for a group of anglers from Seattle, Washington. Later on the 19th, the Pisces C Rod, which was fishing in the Bisbee’s Black & Blue caught and released the first spearfish we’ve seen in a long time, estimated at around 50lbs, just off of Destiladeras. While the Pisces Tracy Ann, captained by Julio Castro managed to catch and release an amazing four blue marlin, all on tigrillo lures. They were estimated between 200-280lbs for a group of anglers from Michigan. On the 18th, this same boat caught and released three blue marlin of between 150 to 300lbs of the Cabrillo sea mount. On the 16th, the Pisces Rebecca captained by JR Alucano, caught and released four blue marlin ranging from 250-400lbs, as well as two striped marlin of around 130-140lbs. 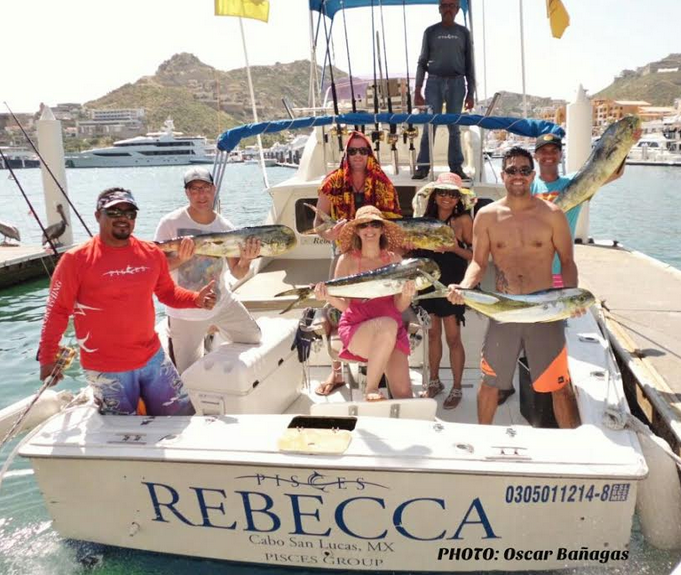 OTHER SPECIES: Large yellowfin tuna remain the main act in the other species department, with many fish being boated over 100lbs. There was dorado throughout the week, as well as some wahoo. While roosterfish and sierra mackerel, made their appearance for those boats fishing inshore. The Pisces Tracy Ann, captained by Julio Castro was fishing in the Bisbee’s on the 16th, and even though they didn’t catch any qualifying fish. They still managed two yellowfin tuna of 140 and 171lbs respectively, as well as a striped marlin that was released. The Pisces C Rod managed to land two yellowfin tuna of 160 and 180lbs on kite lures, just off the 11:50 Spot, for a group of anglers from New Mexico. As well as catching and releasing two blue marlin near 200lbs, and a striped marlin of around 100lbs. While the Pisces Ruthless captained by Roberto Padilla, caught five yellowfin tuna, three of them were over 100lbs at 147-160-174lbs respectively. As well as landing a blue marlin of 281lbs, for a group of Texan anglers.

LOCATION: Pacific side mostly, with some success later in the week at the 140 Spot.

WEATHER CONDITIONS: Clear and calm seas, sunny to partly cloudy skies and air temps from the mid 70’s to the 90’s.