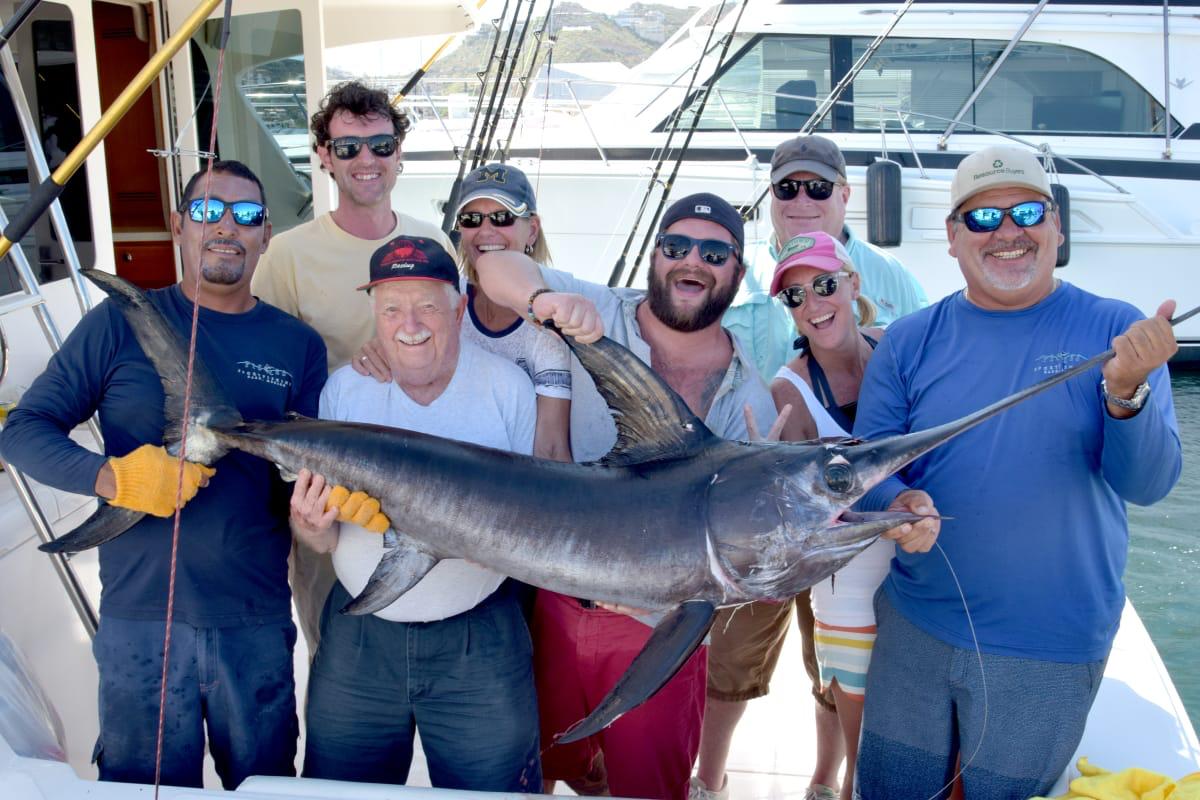 Another spectacular week of fishing  in Cabo – Here’s the numbers: 247 Billfish caught and released, which included Striped and Blue Marlin, Black Marlin, Sailfish, and a surprise Swordfish catch on Pisces 42′ Caliente.  This fish was landed after it took casted live bait, when spotted swimming on the surface in 300 feet of water. Anglers that day included 89 year old John MacEwen who also caught and released 1 of 6 Striped Marlin and 2 Mahi with us on Caliente two days later. Pisces 31′ Ruthless found the Blue marlin honey-hole on October 9th,  when they went 2 for 4 on Blues; those released were about 200 – 250 lbs and they released a sailfish too. Equally impressive, long-time Pisces anglers The Nevilles (Patrick & Jean) from Florida fished three days on their favorite boat, the 31′ Tracy Ann with Captain Julio. The couple, who are in their late 50s released a total of 26 Striped Marlin, with 15 of these caught in one day, 1 Blue Marlin, 4 Sailfish and 1 YellowfinTuna. Pisces 72′ Tag Team had a Grand Slam this week, when fishing on the East Cape for an epic live-aboard trip for Shawn Malleck and friends. They released a Striped Marlin, Sailfish and an approximate 300 lbs Black Marlin and also found tuna and wahoo. Again, more BIG Yellowfin Tuna this week: one of 217 lbs caught on Pisces 31′ Tracy Ann (they’ve had 3 YFT between 100 – 200 lbs in the span of a week and a half) and the other three, caught on Pisces 35′ Bill Collector 2, (who’ve caught the biggest YFT of the season in previous weeks, 286 lbs!). Captain Gil Castro and anglers landed a 251 pounder, and then Saturday, landed THREE more, which weighed in at 39, 154 and 181 pounds! Not to mention, these same anglers, Chris, Josh and Ryan Williams, along with female angler Julia Straszewski, fished with Capt Gil two days prior and landed 4 Wahoo ranging from 30 – 50 lbs each plus 2 Big mahi!  And still, one more big YFT, Caught on Pisces 38′ C Rod of 187 lbs. We had a total of 61 Tuna caught and 274 Dorado. Dorado sizes have held strong, with decent fish averaging 20 – 30 lbs plus.  Other catches, which totaled 37 fish, included wahoo, sierra mackerel, snapper, a few sharks, skipjacks and triggerfish. 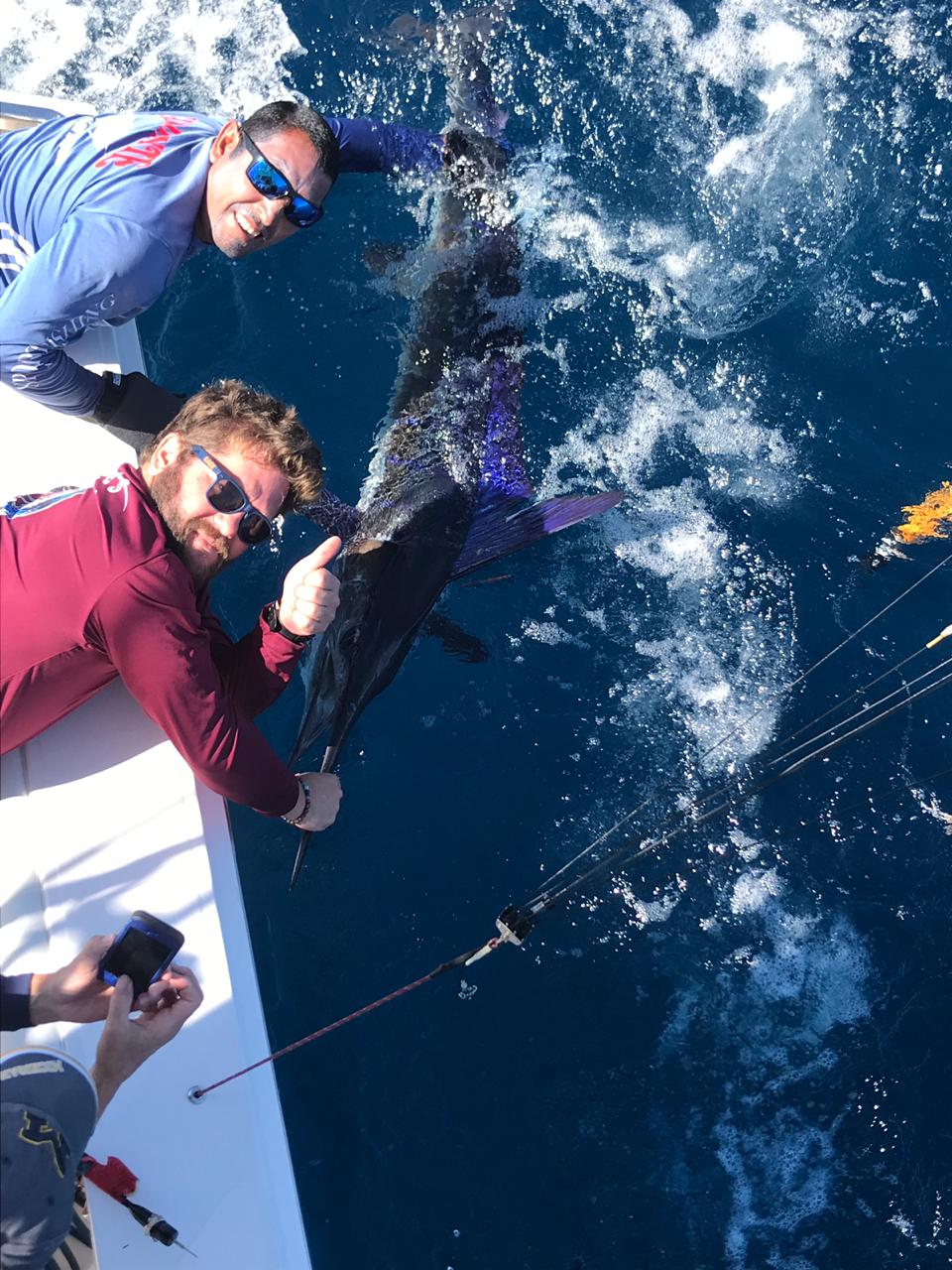 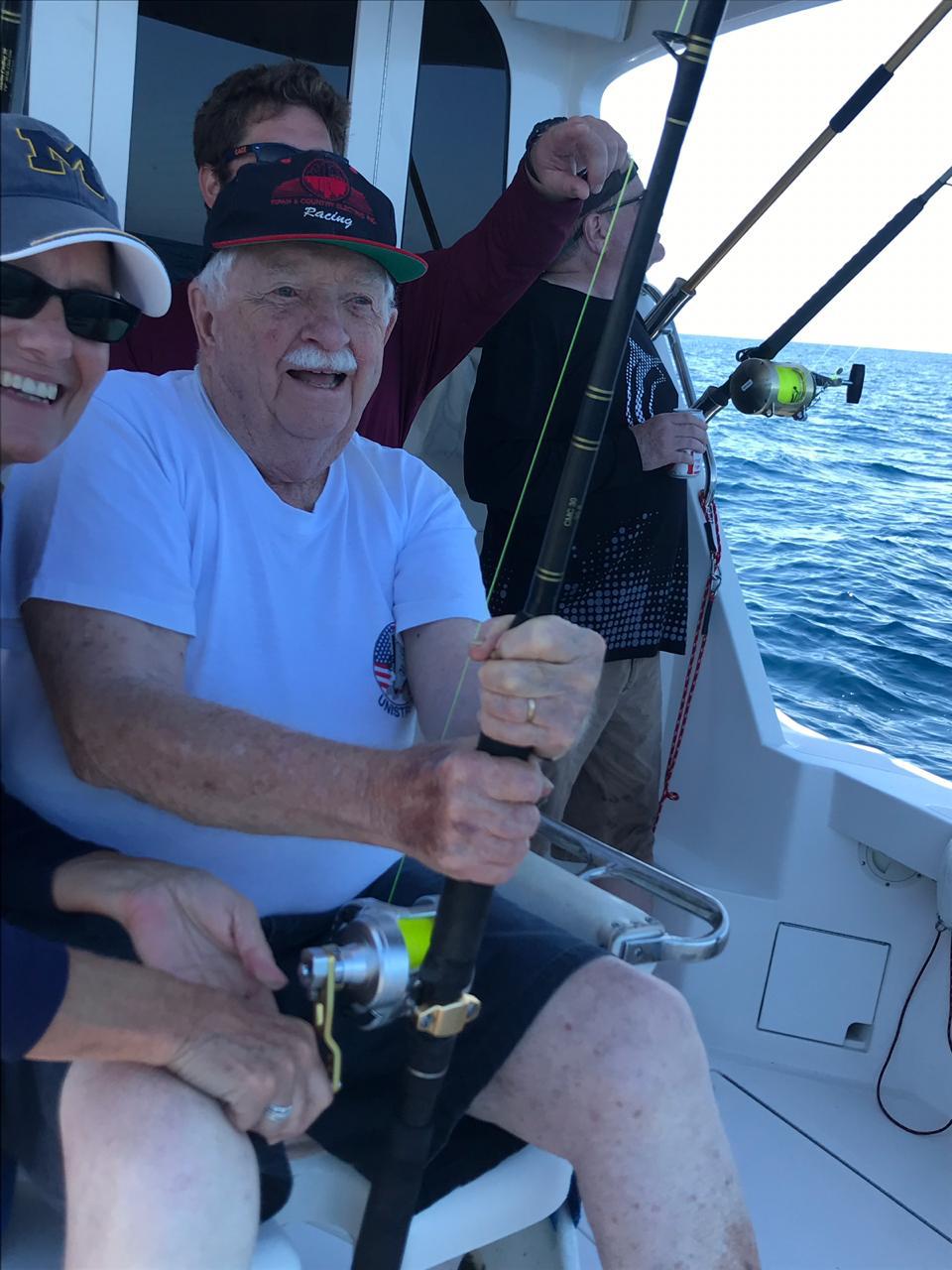 This week we’ll start with the MacEwan and Wettlaufer families from Berkley, Michigan. This was a remarkable group of anglers who found amazing luck (also because they were paired with the highly skilled, Captain Jaime Gonzalez and Luis Arballo of the Pisces 42′ Caliente of course). In two days of fishing they caught one 71 lbs swordfish, 9 striped marlin released and 7 dorado. The swordfish was seen swimming 2 miles off the beach in 300′ of water close to Pedregal beach. Casting live mackerel off the bow with a 80 lb floro leader, 40 lb mono with 8/0 circle on a Shimano 16 Talica and 7′ Melton International marlin caster. Ate the live mackerel bait immediately, jumped twice for a 40 minute fight. 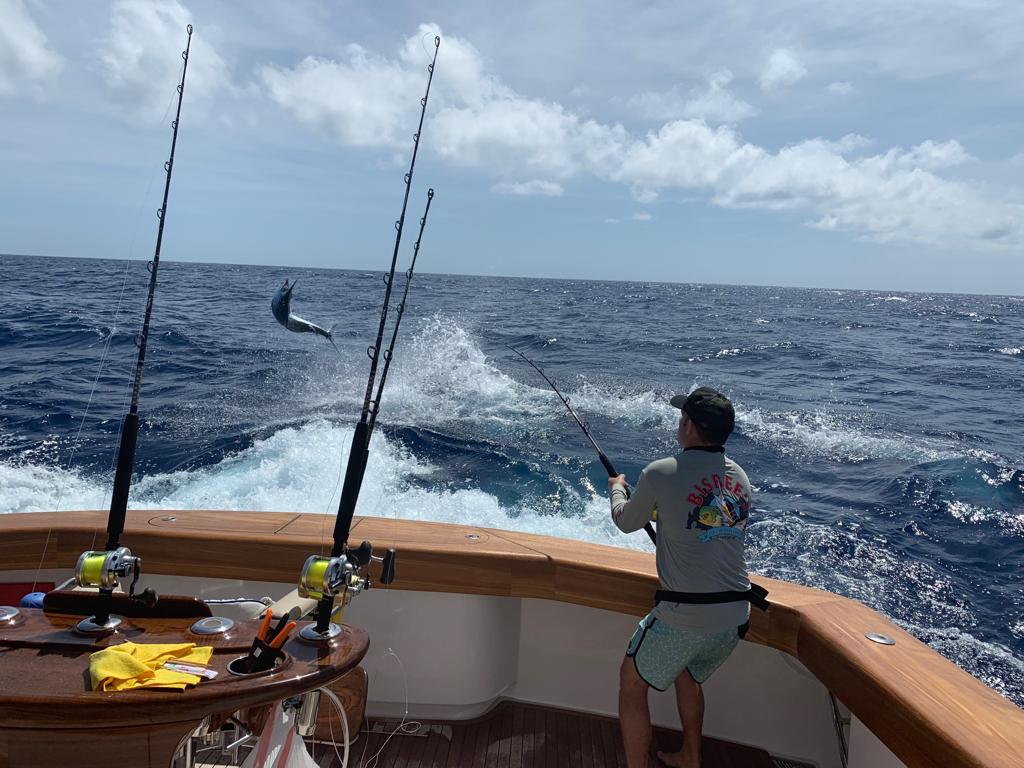 Pisces 72′ Tag Team had a great three day trip, anglers raved about the whole experience, saying it is a must for anyone who really wants to experience Baja fishing at its finest. Aboard this vessel they were able to head to the Pacific for their Striped Marlin fill – Fishing close to Cerritos and releasing 7 striped marlin on ballyhoo.  By the next morning they were already fishing the Sea of Cortez and caught their remarkable Grand Slam. 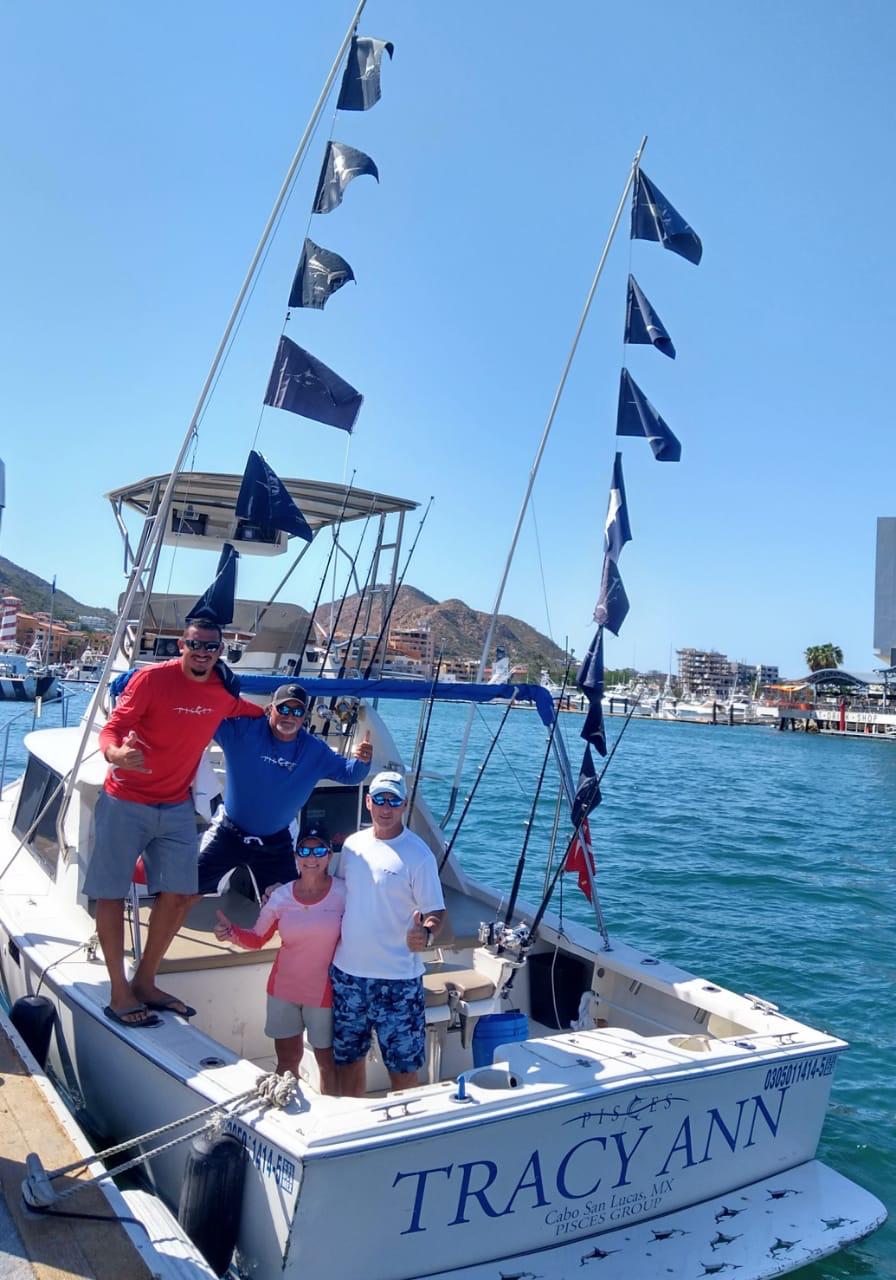 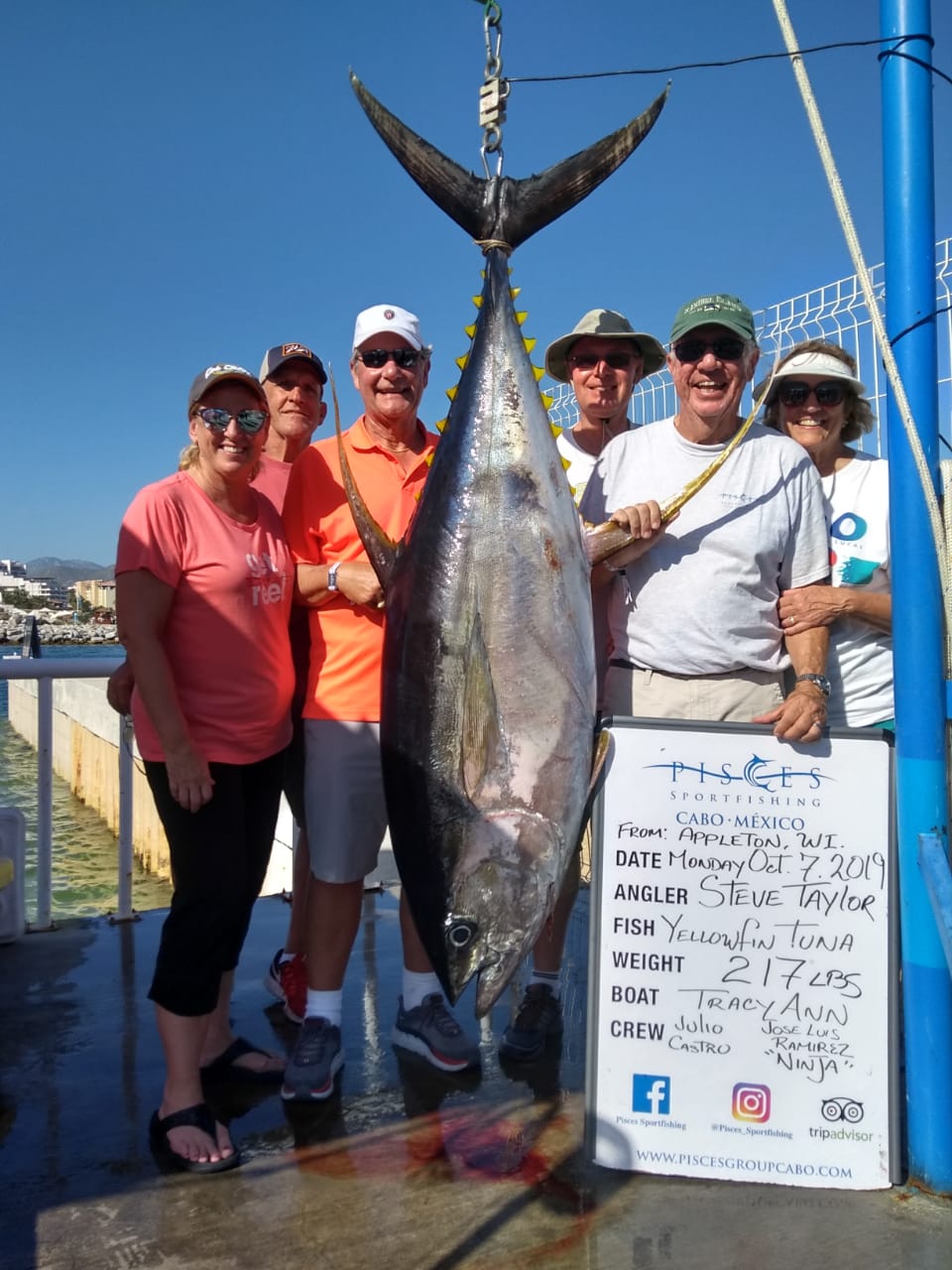 Steve Taylor with friends and fam,

showing off his 217 YFT caught on Pisces 31′ Tracy Ann

The Neville’s, with Captain Julio Castro at the helm of the 31′ Tracy Ann and headed close to Cerritos for their remarkable marlin catches over their three days of fishing, using ballyhoo bait. Total catches amounted to 26 Striped Marlin, with 15 of these caught in one day, 1 Blue Marlin, 4 Sailfish and 1 YellowfinTuna. Their Blue Marlin, which was about 200 lbs was caught on a orange lure close to San Jaime. Their yellowfin was also caught here, on cedar plug lure, and was about 25 lbs. The next day out for the Tracy Ann brought the first big yellowfin tuna caught in the week, a 217 pounder by anglers the Searle and Taylor’s from Appleton, Wisconsin. The  tuna hit on a yummy flyer on kite, along with two others of about 25 lbs at Golden Gate. They also caught 3 Dorados of about 15 and 20 lbs each on lures. They then headed to Captain Tony’s and had their fresh tuna cooked several different ways. Delicious!

Crazy Striped marlin releases for our epic new crew on the 37′ Viking ” BBII”, which on their two best days caught and released 21 Striped marlin and 1 dorado and 13 Striped Marlin and 3 dorado. Anglers for the 21 releases were the Kuo’s, Faulkner and Metz families. All Marlin averaged 110 lbs each and hit on ballyhoo close to Cerritos. 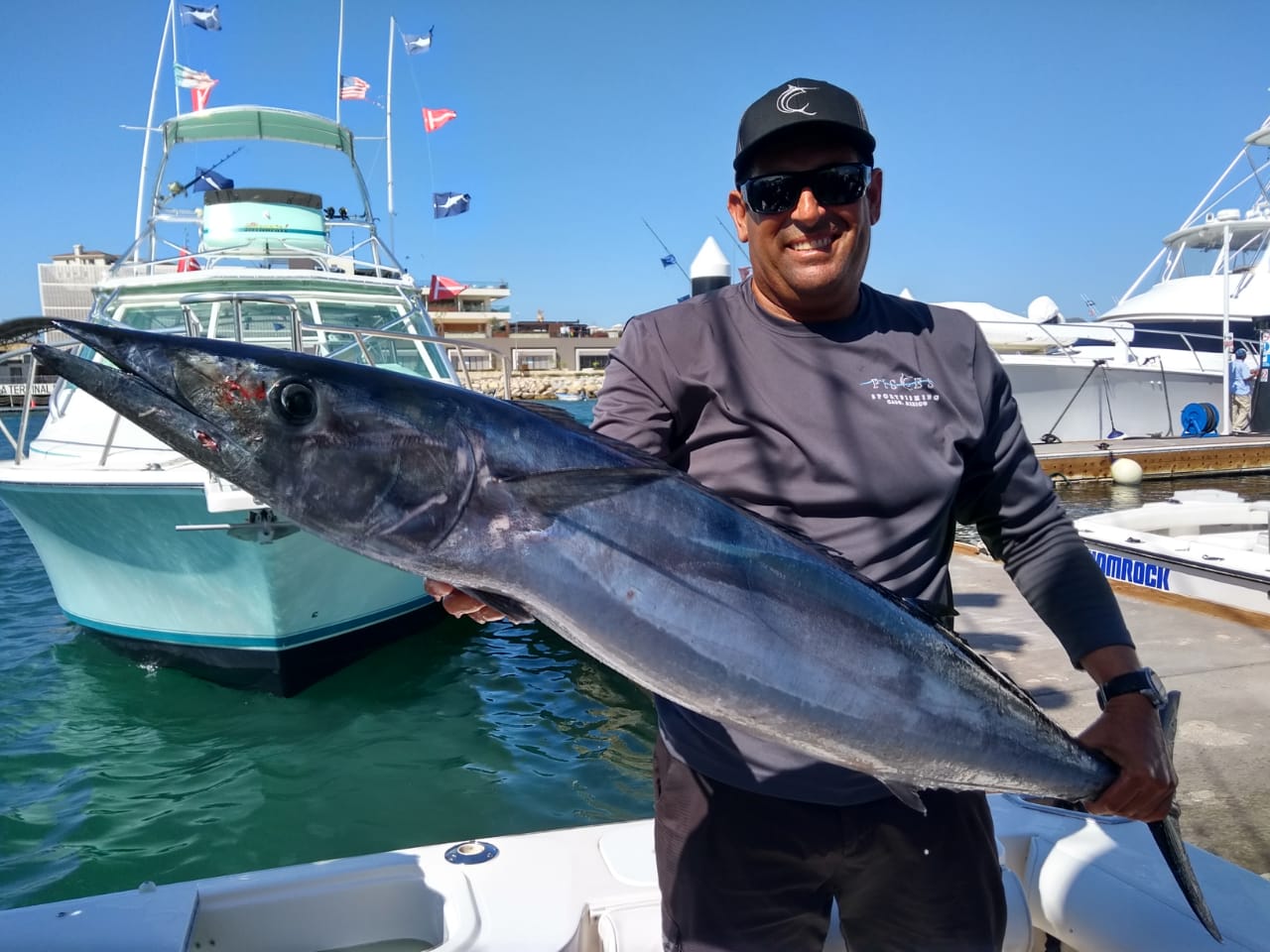 Then on October 10th Pisces 35′ Bill Collector went in search, specifically, for big tuna. Captain Gil told the anglers from CA, ” You want tuna? We’ll catch the BIG one today.”  And they did just that. Captain Gil  headed to the San Jaime bank and put out  the kite and yummy flyer. This monster 251 pounder hit , and the anglers fought the fish for 2 hours before getting it to the boat.  They had all fished with Gil a few days prior, they wanted a wahoo, so they landed four between 35 – 50 lbs – and 2 large dorado as well. The wahoo hit on petrolero lures, rapala and ballyhoo on the East Cape. Dorado hit on tigrillo lures. 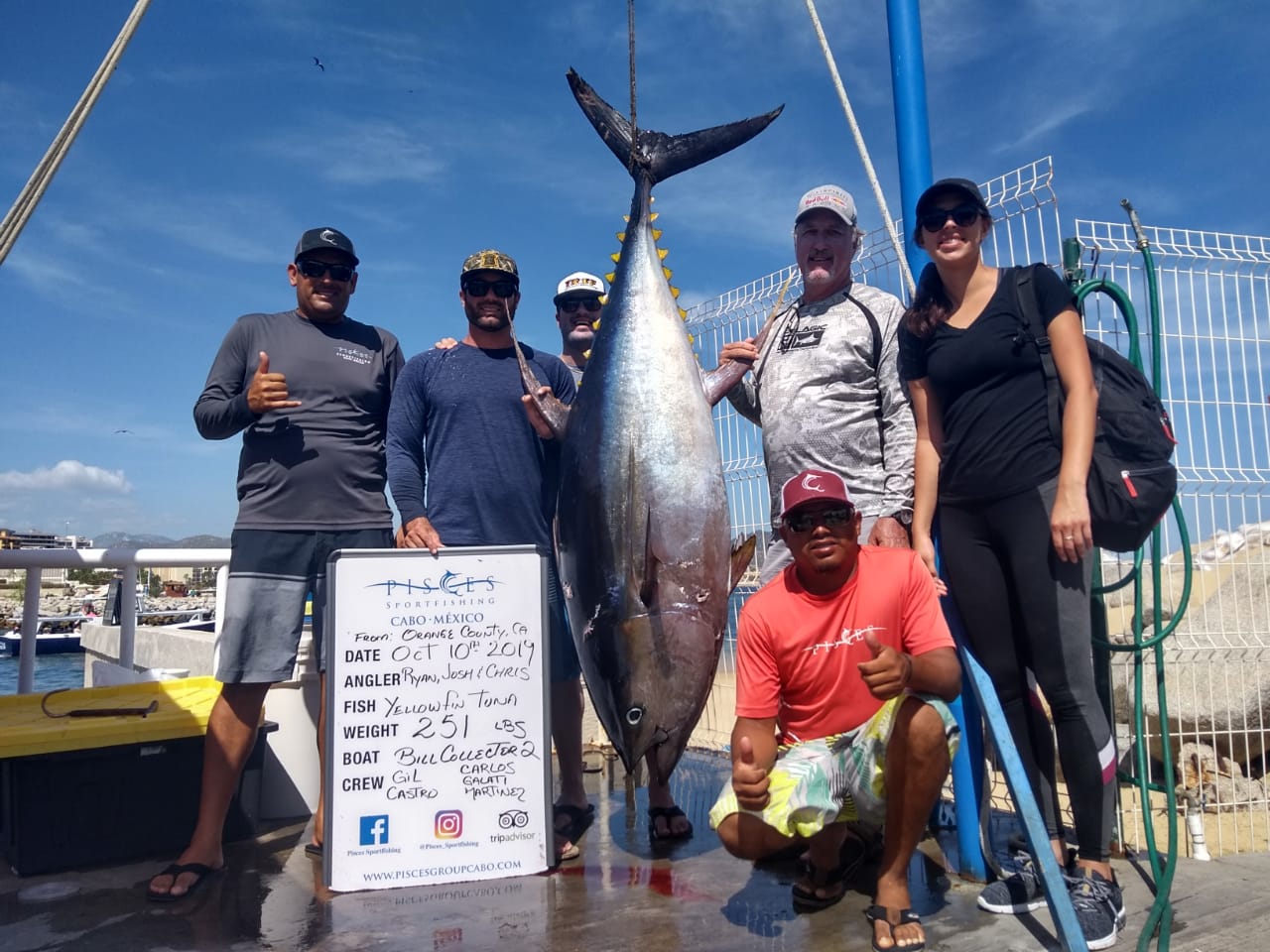 Ryan, Josh, Chris and Julia with their THREE YFT!

The next day Pisces 35′ Bill Collector did it again, this time hitting the dock with not one but three  big YFT. A 181 pounder, 154 pounder and 39 lbs yellowfin. They hit on kite with yummy flyer and lime green lure just outside of San Jaime. 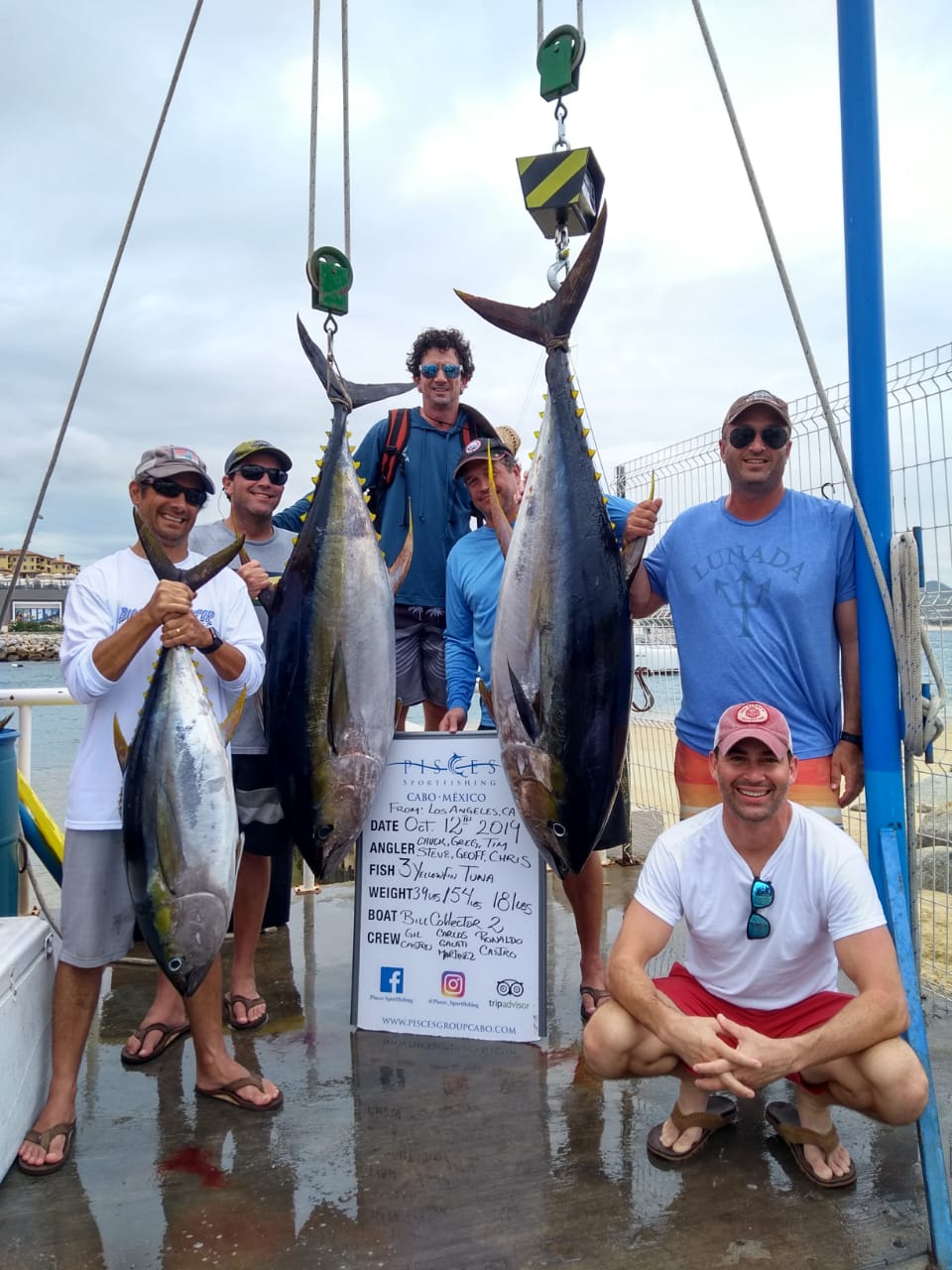 Pisces 38′ C Rod, with owner angler aboard caught a nice 186 lbs tuna on kite with yummy flyer. and two dorado Later in the week they did well again with 11 yellowfin tuna averaging 30 lbs, caught about 30 miles South of Cabo, along with one dorado; hitting on green lure. Pisces 38′ C Rod then released 4 Stripeys at Golden Gate, weighing  about 130 lbs each, hitting on ballyhoo, for anglers Annette Owens and Joseph Diegel. They also caught two 20lbs Dorado at Los Arcos area, on ballyhoo. 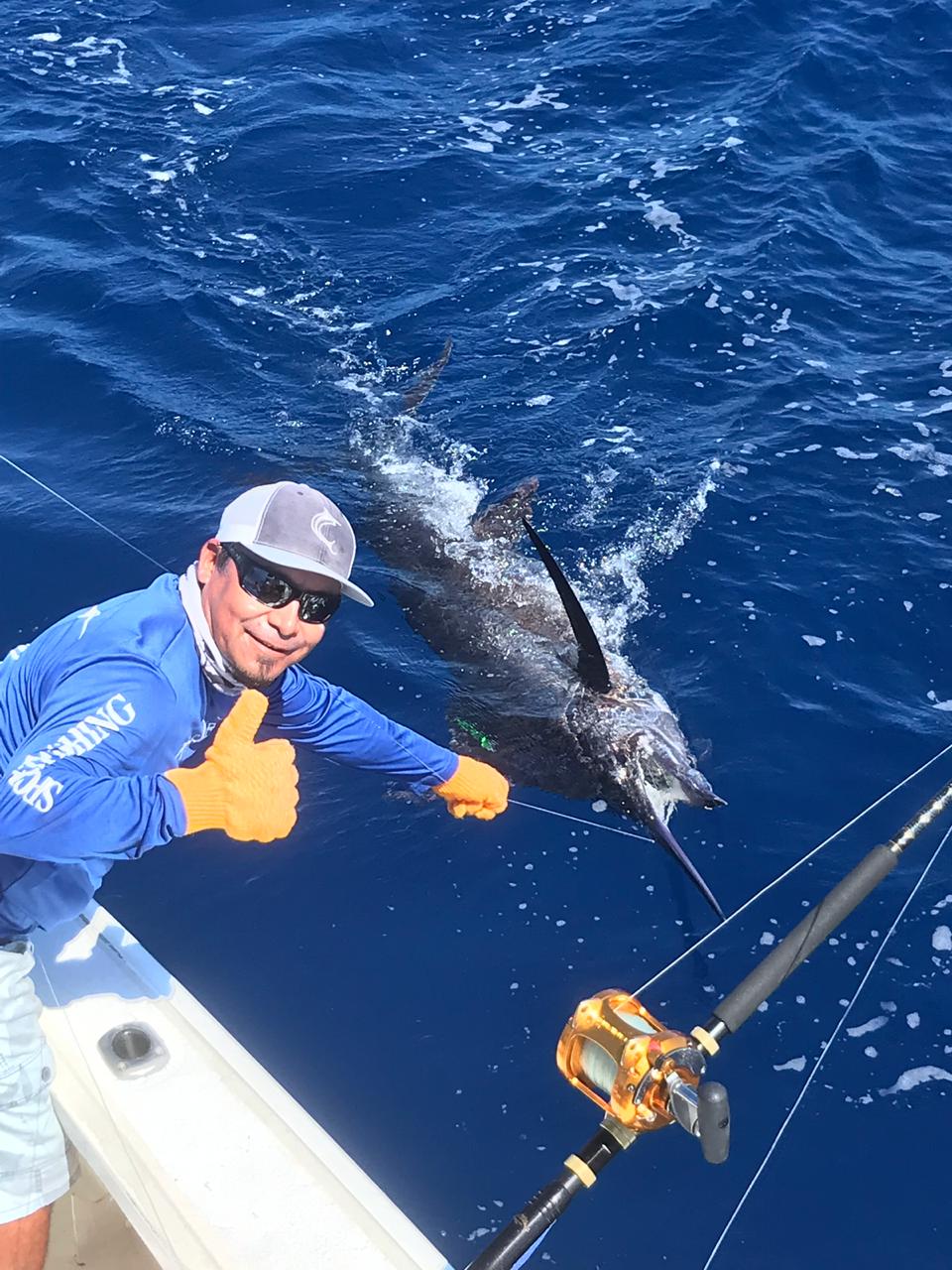 Pisces 31′ Ruthless had a fantastic week once again; starting off with 10 Striped Marlin released on mackerel, caballito and ballyhoo at Cerritos. Anglers were the Nelson’s from Illinois. Later, angles on board went 2 for 4 on Blue Marlin, each were around 200 lbs and hit on live and dead mackerel bait close to Punta Gorda. They hooked a sailfish as well, but lost it.  Pisces 32′ Bill Collector also released a 200 lbs blue marlin this week, and did well with the Stripeys too – 5 striped marlin released for Austin and Mariah Alderman from Texas. Their fish weighed approx 90 – 125 lbs each and hit on dead bait close to Cerritos. They also kept a nice 25 lbs dorado for dinner. 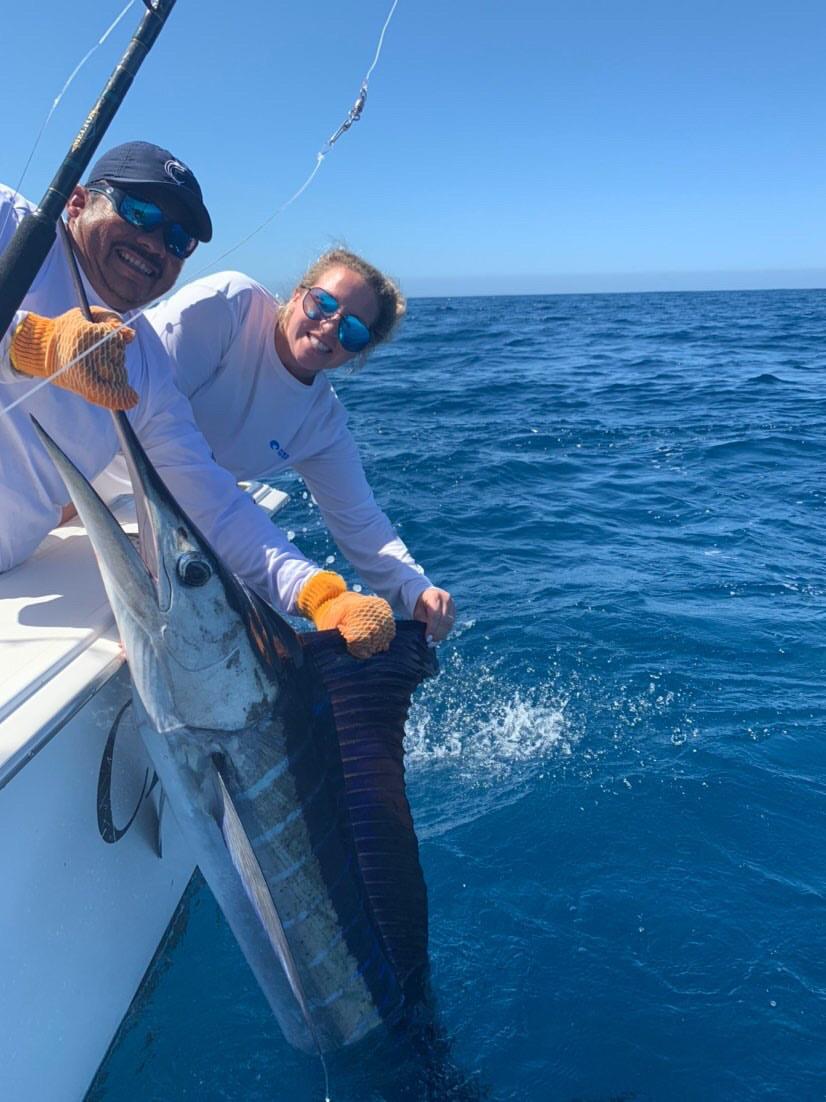 Dorado limits were easily reached this week with Ruthless being one of the best boats for this as well. For Example, Oct 12th they caught 22 dorado between 10 and 20 lbs each on feather lures of various colors at Las Margaritas and Pozo Cota. Anglers were the Harrigan’s from Nevada, who respected catch limits and only kept 2 dorado each. Pisces 28′ Andrea and 3 anglers aboard caught 14 dorado between 15 and 20 lbs, keeping only six and releasing two striped marlin as well. Pisces 31′ Rebecca reached limits for their 5 anglers and called it a day, coming back with 10 mahi for dinner. 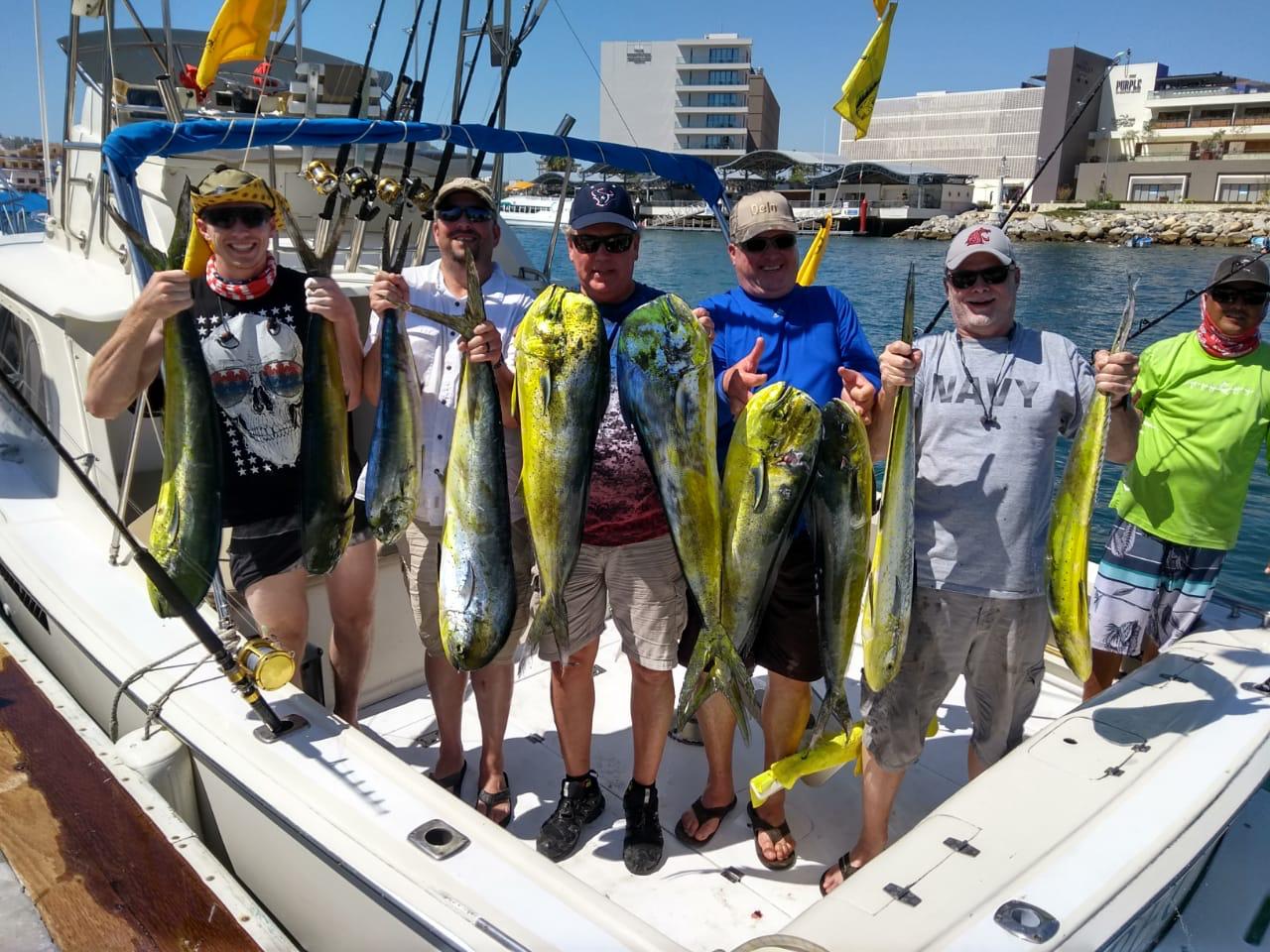 Pisces 31′ Rebecca with limits on Mahi

Our 42′ Sportfishers did well too – Pisces Hot Rod caught and released 14 for 20 on Striped Marlin total, between Gaspareno and Cerritos on ballyhoo, mackerel and caballito bait. They also caught a nice mahi. Pisces 42′ Yahoo totaled 8 striped marlin and 5 dorado this week. Marlin were caught on live and dead bait close to Gaspareno and Todos Santos,  while dorado were found close to Elias Calles  and Pozo Cota, weighing up to 25 lbs each. Pisces 42′ Whiskey II caught and released 6 of 8 Striped Marlin in one day, with Captain Benito heading to Las Margaritas and Pozo Cota to find them. Fish weighed up to 120 lbs each and hit onlive/dead mackerel bait. Anglers from Texas also caught 3 nice dorado of about 20 lbs each, on dead caballito bait.

LOCATION: Pacific Side mostly from Los Arcos to Gaspareno for Dorado, plus Golden Gate, San Jaime and Cerritos for Marlin and Tuna.