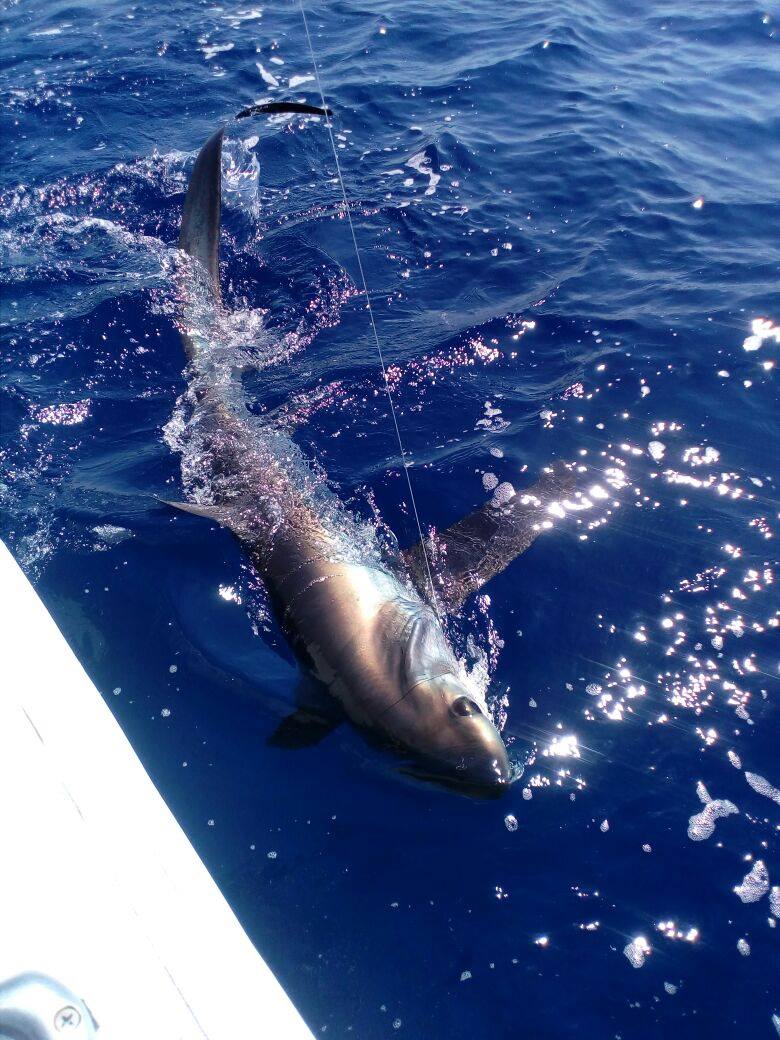 Again this week,  it’s dorados galore! But, we have seen an increase in blue marlin as well.. This is good news as we have billfish tournament season right around the corner! In other catches, still reeling in some tunas, although small, and wahoos have continued to show up as well. Quite a few thresher sharks have not only been caught this week, but have also been keeping anglers on their toes as they have been trying to steal the numerous dorado being reeled in.

The most notable blue marlin catch was from one of our 31 foot boats, captained by Oscar Hernandez. The approximately 400 pound blue marlin was caught out at La Herradura by anglers Gemma Gonzalez and Gerardo Parra from Texas and Guadalajara, Mex. The blue hit on a flying fish lure. They also landed a small striped marlin of about 100 lbs on caballito bait. Both fish were released.

More billfish for 38 ft Speedwell as well, with anglers from Texas who were lucky to land  one striped marlin of around 80 lbs and one blue marlin of about 250 lbs both of which they released. The striper hit on ballyhoo bait, while the blue hit on a white/pink lure. They also managed to catch some dinner, three dorados of about 25 lbs each, all hit on feather lures. All fish were caught out at La Heradura.

The next day, Speedwell managed to find luck out at La Herradura again! This time, for anglers from Ohio, who caught one striped marlin and one blue marlin. The striper weighed about 100 lbs, hit on a blue/white lure and was released, while the blue weighed about 350 lbs., hit on caballito bait and was also released.

42 ft Hot Rod caught and released one striped marlin, twelve dorado ad five silky sharks (all released). The striper hit on caballito bait  and weighed about 80 lbs, the dorado were all good size, ranging from 15 to 25 lbs. These were caught on feather lures and the silky sharks hit on caballito bait. All fish were caught 35 miles out of San Jaime by anglers from Winnipeg, Canada. 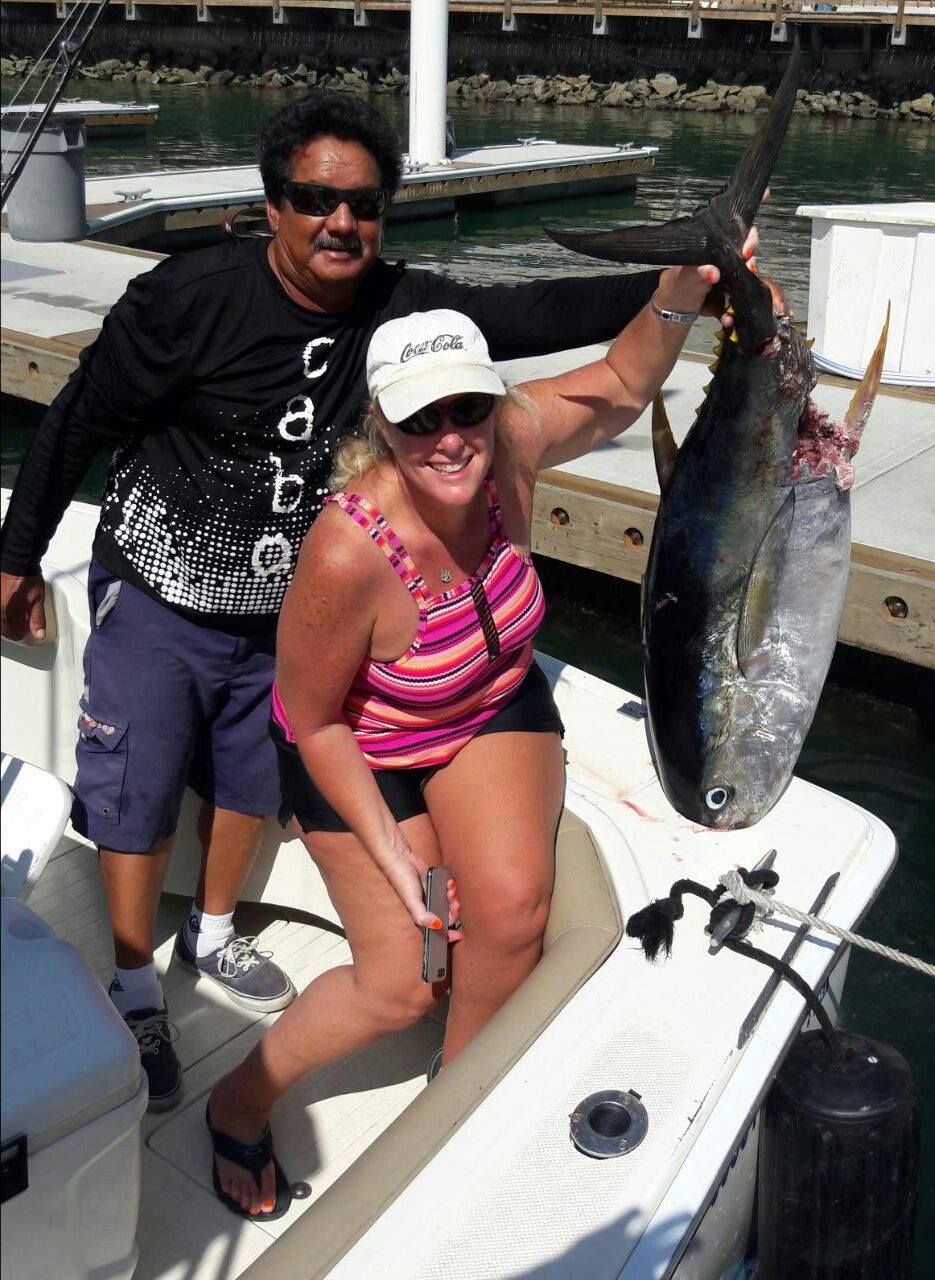 Yellowfin attacked by shark while being reeled in!

C rod, our 38 ft, captioned by Abel Ramirez also caught a nice striped marlin on mackerel bait and released it out at Golden Gate. Anglers Charles Martin and Shelly Lamb also caught 10 dorado (some released) and one nice 25 lbs wahoo on black/red lures out at pozo Cota.

Again, C rod impressed later in the week with a catch of seven dorados, one yellowfin and one blue marlin, caught by anglers from Texas.  The dorado weighed about 10 to 14 lbs each and were caught with bait out at Pozo Cota. The yellowfin was small, only about 10 lbs and was caught on a hoochi lure.  To land the blue they went out to Los Arcos, where it hit on a black/red lure. The fish weighed approximately 160 lbs and was released. 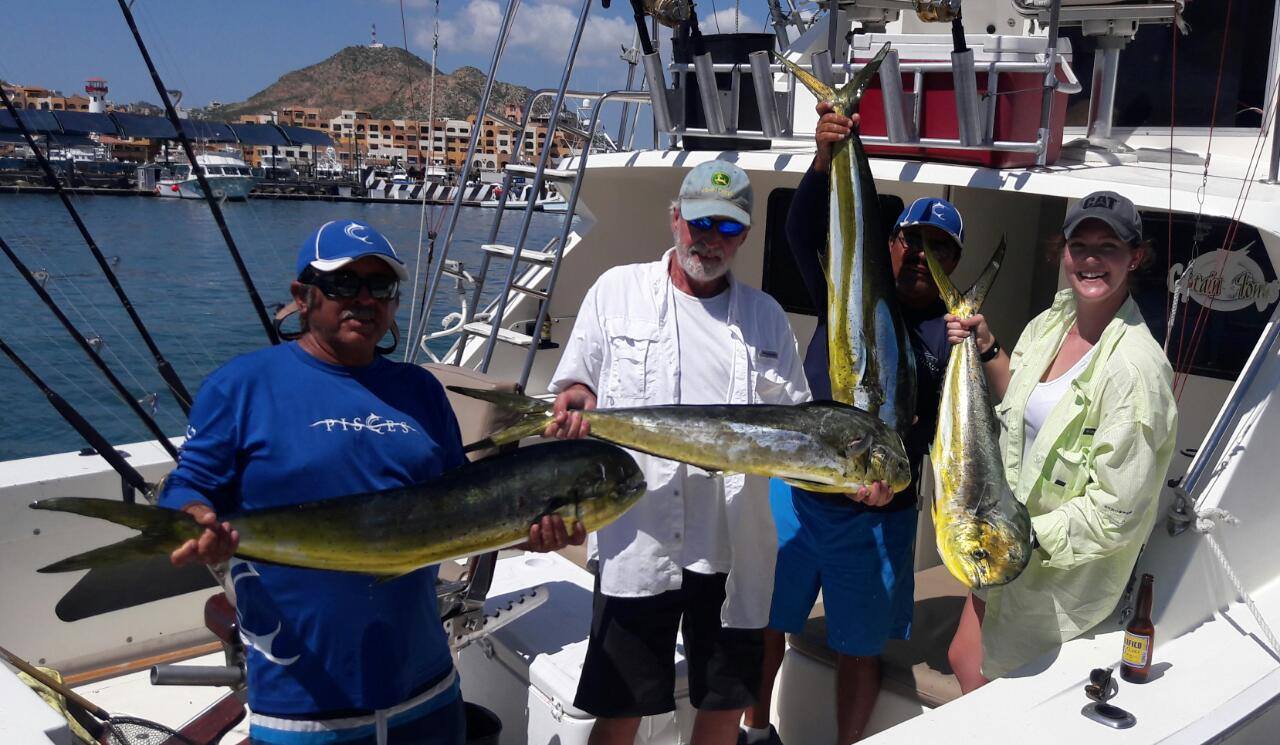 Just a few of the dorado caught aboard the Valerie

However, I would have to say that the most notable boat this week would have to be the 35 ft Valerie, with 25 dorado caught in one day all ranging from 10 to 20 lbs, as well as five yellowfin tuna and one silky shark. The dorado were all caught out at las Margaritas and Los Arcos, hitting on green, blue/white, feather lures and ballyhoo bait. Anglers Brian and Lori Bowen had their work cut out for them as they also landed the five yellowfin of about 10 to 15 pounds and a larger tuna of about 40 lbs. These hit on cedar plugs, feather lures and hoochi lures out at Los Arcos. The silky shark of about 70 lbs also caught at Los Arcos hit on caballito bait and was released.

Another great day for Valerie and sole angler Daniel Ryan saw one striped marlin caught and 20 dorado! The striper was of about 80 lbs and hit on caballito bait out at lower Golden Gate and was released. The dorado ranged in size form 10 to 15 lbs with various released, they were landed on cedar plug, feather and green lures as well as ballyhoo bait out at Migri?o.

And to top it off, the Valerie and anglers from Missouri caught and released 3 striped marlin of 100, 120 and 130 lbs each. The marlin hit on mackerel bait out at Golden Gate and they also caught five dorado of about 15 lbs out at Las Margaritas on green lures as well as mackerel bait.

And a very varied day for 28 ft Andrea to close out the week with 2 striped marlin of about 100 lbs, 3 dorados of about 15 lbs, 1 grouper and 2 two small ladyfish. The marlin were both released by angler Wallace Center and hit on caballito bait out at Golden Gate. The dorado hit on feather lures and pink lures, as well as on mackerel bait. The grouper landed on mackerel bait and weighed about 10 lbs, and the ladyfish bit on caballito bait.

Of which, 22 were marlin; 7 being blue marlin – all released.

Dorado numbers: 544, with many released.

WEATHER CONDITIONS: Clear skies and calm waters, with average wave height of about 2 to 3 feet.