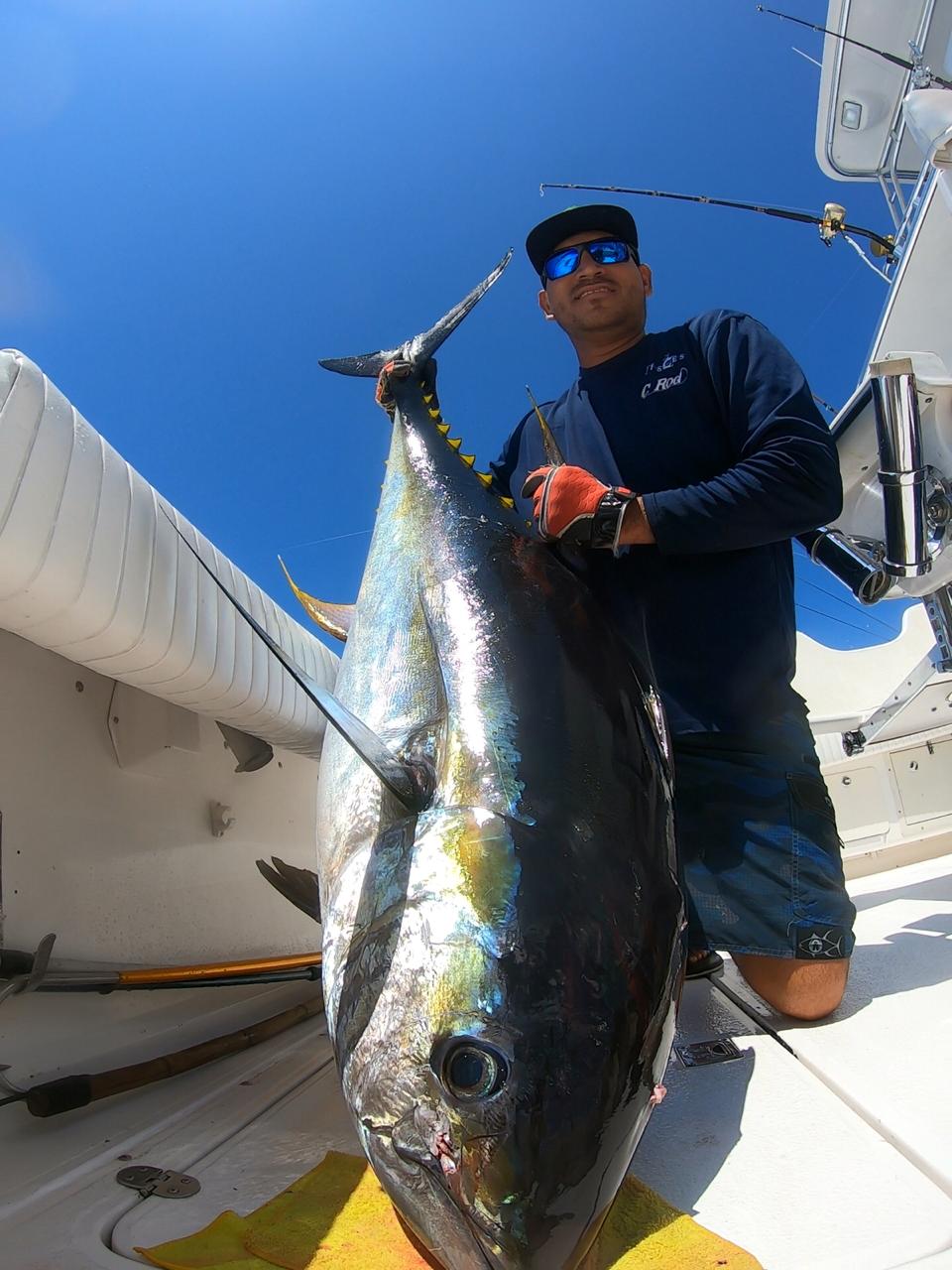 Even with this week’s Hurricane Lorena, which only brought slight rain and closed the port Friday and Saturday, the amazing fishing continues. Marlin catches are down slightly, but only due to the fact that we fished less days because of this. We had 100 billfish released compared to 165 last week, but we did see more blue marlin this week, sailfish and even some spearfish released. Many boats this week caught and released up to 10 striped marlin each, with tons of more marlin bites still! Catch numbers for dorado doubled, as last week we saw over 40 dorado caught, and this week we had a total of 97, of course respecting catch limits. Tuna numbers increased as well, but also because we had more boats targeting them and, another notable fish landed this week. This time it was angler Derek Stills aboard Pisces 38′ C Rod catching a 140 lbs Yellowfin close to San Jaime Bank. 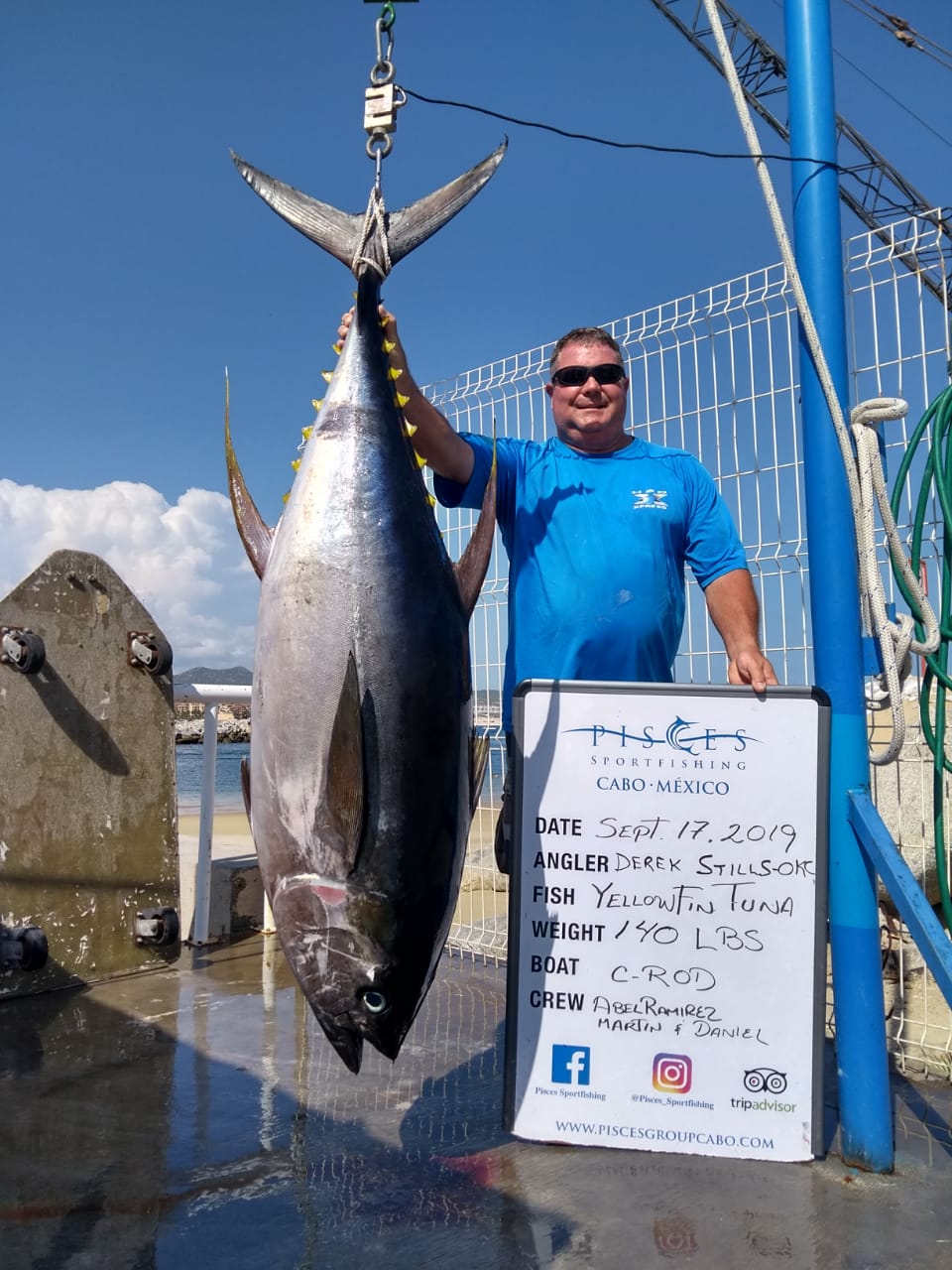 Derek Stills with his 140 lbs Tuna

Derek and his friends Jerry Deford and Lee Martin from Oklahoma set out on Pisces 38′ C Rod on September 17th in search for tuna. They found what they were looking for rather quickly, landing a 140 lbs and a 20 lbs tuna outside of San Jaime Bank on guacamayo lures.

We had anglers from Michigan, a group of friends who come to Cabo just about every other year to fish with us, fish three days on three different boats. The guys diversified their fishing efforts and did one day inshore panga fishing, one day focusing on billfish and some did a day of searching for tuna. All in all, anglers Larry Vollar, Scott Abrahams, Steve Banks, Gavin and Gordon Narburgh, Will Fender, Keith Tidd and Greg Huffman caught 49 fish total. They went 19 for 35 on Striped Marlin releases, and also released 2 sailfish and 3 nice blue marlin which ranged from about 150 to 220 lbs each. Two of the blues were caught on Pisces 31′ Tracy Ann, they also released two very nice spearfish this same day. The spearfish were about 70 and 80 lbs and hit on dead caballito bait about 22 miles out at the 150 Spot. Their tuna fishing resulted in 12 yellowfin between 20 and 30 lbs each and the also caught 9 dorado, 1 bonita, and 1 skipjack. 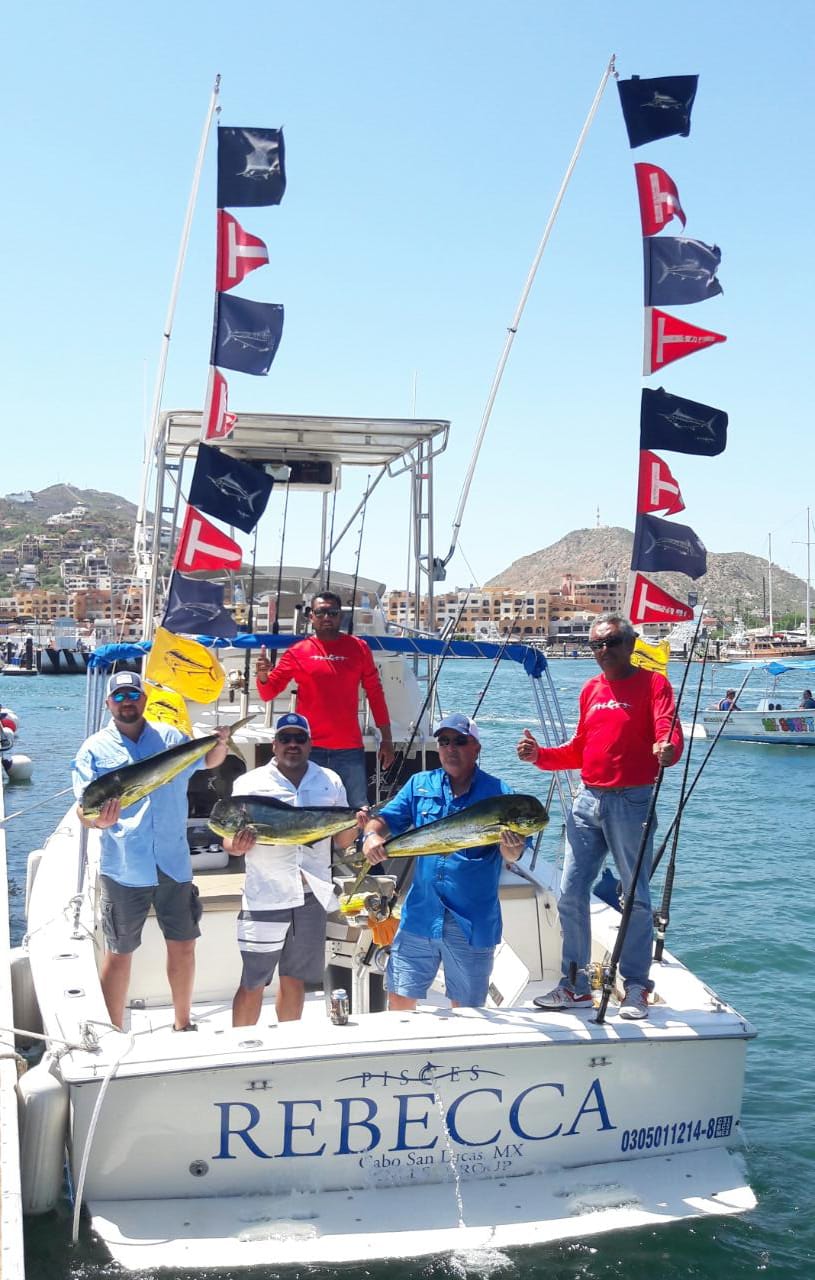 Most of the marlin caught by the group hit on ballyhoo bait and dead caballito with some taking the pitched live bait as well. Striped Marlin were found mostly up the Pacific between Cerritos and Punta Lobos, and weighed on average about 100 lbs. The boats fished aboard were Pisces 28′ Andrea, 31′ Rebecca and Tracy Ann, 30′ Karina, 25′ No Borders and Pangas.

Pisces 35′ Valerie also did well with striped marlin, going 5 for 10 midweek, with the largest of about 120 lbs. Anglers from Kansas also caught 5 dorado of about 10 and 15 lbs each on hoochis close to Golden Gate. 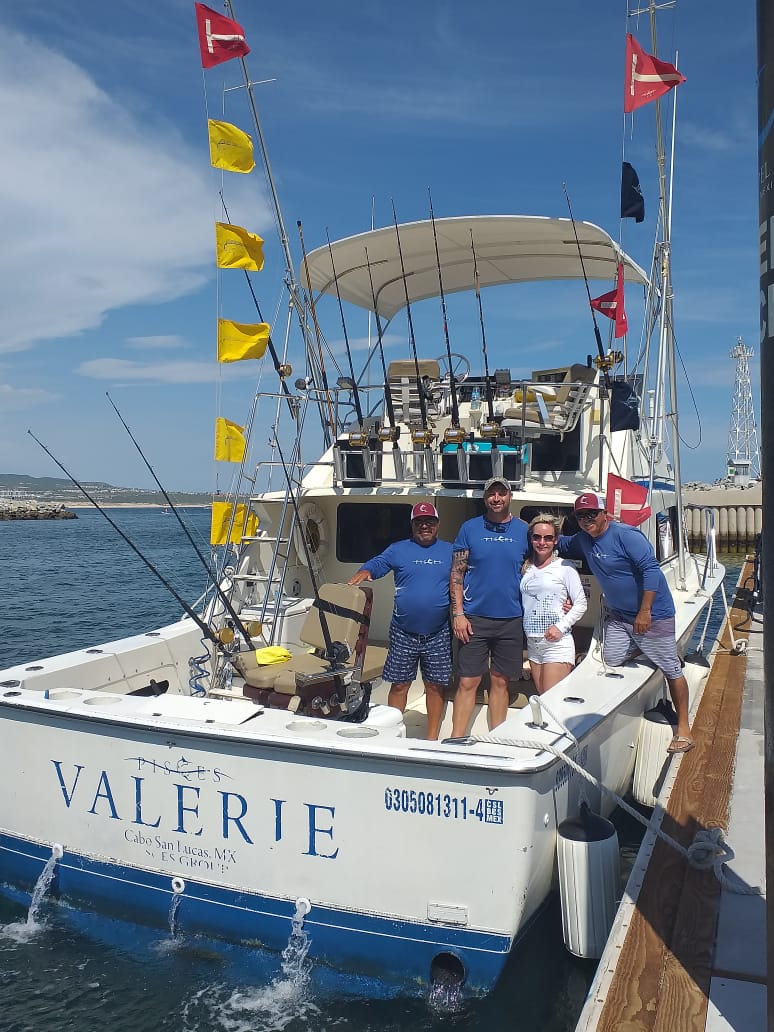 One of our top boats this week,Pisces 38′ C Rod not only landed the big YFT but had a great day with 3 striped marlin released by the Fernandez family from New Mexico. They also released a 220 blue marlin this same day and kept 2 dorado of about 12 – 15 lbs each. All billfish were caught around the 1150 Spot. Marlin hit on guacamayo lures and live caballito. The dorado hit on feathers and cedar plugs at the 95 Spot. 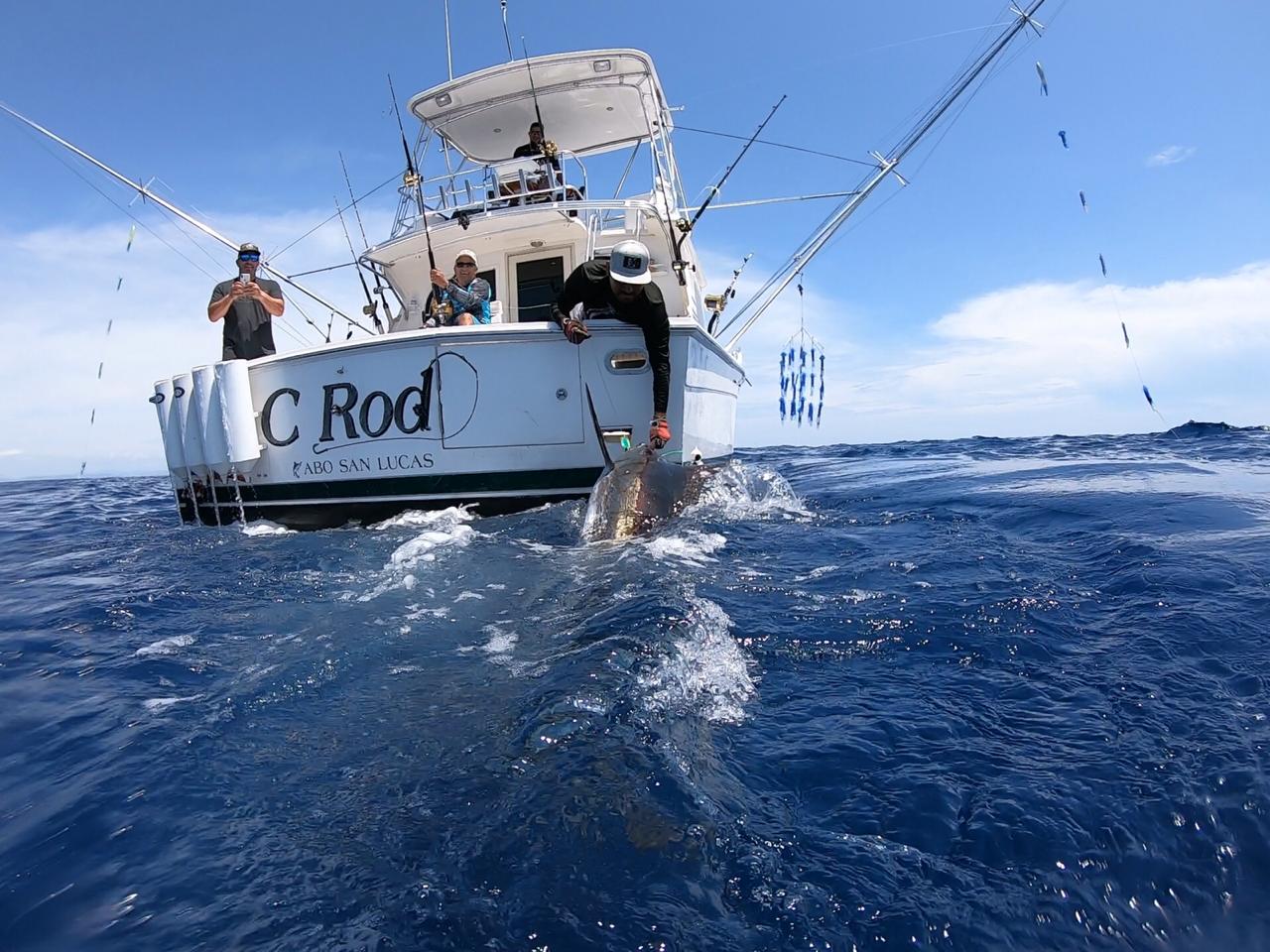 Top dorado boat was Pisces 28′ Andrea with an impressive day for solo angler Aaron Fowler from Florida. He caught 20 dorado all between 12 and 30 lbs approx, many hitting on our new Accurate reels rigged with cedar plug lures and feathers at Los Arcos.  Of course, we respected all catch limits and he released 16 dorado, only keeping the biggest, and also tagged one dorado too. Aaron also caught and released a Jack Crevalle and kept 1 sierra mackerel. 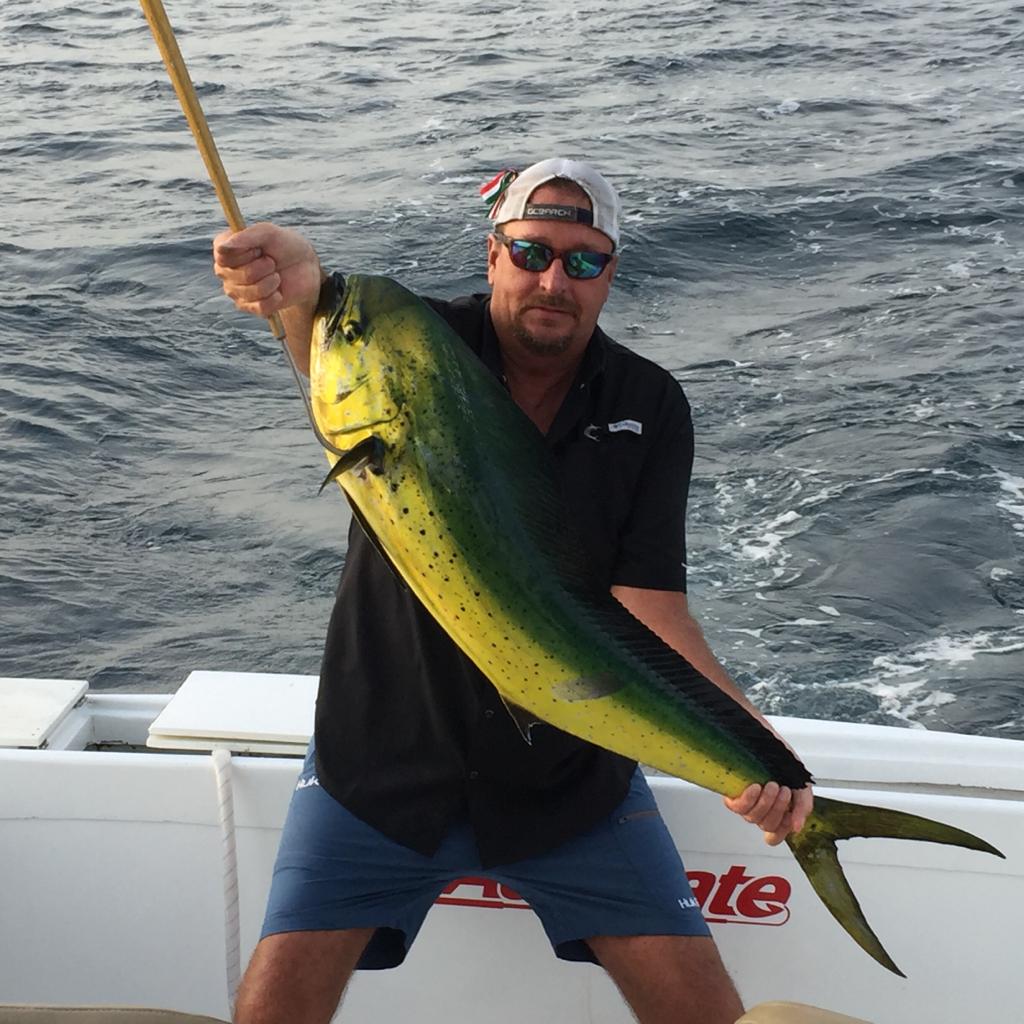 Aaron Fowler on Pisces 28′ Andrea with one of 20 dorado caught that day!

Pisces 31′ Ruthless wasn’t far behind with the dorado though, anglers Cherly and  Elza Robinson caught 12 dorado between 10 and 20 lbs, releasing 8. All hit on live and dead bait closer to shore at Golden Gate. They released 2 sailfish at Pozo Cota as well and had 2 more marlin bites that didn’t culminate in official release. Plus, 4 nice red snapper around 10 and 15 lbs each.

Pisces 60′ Reel Machine had 3 dorado hitting on live caballito and lures at Los Arcos, 2 yellowfin on cedar plus and 2 skipjacks.

Pisces 32′ Bill Collector did well with 13 yellowfin tuna hitting on cedar plugs and feathers at Golden Gate, where anglers David Younkan, Mary Silberberg and Sally Davis also caught a nice dorado on a lime green lure.  Then two more amberjack on feathers at Pozo Cota rounded out the day. 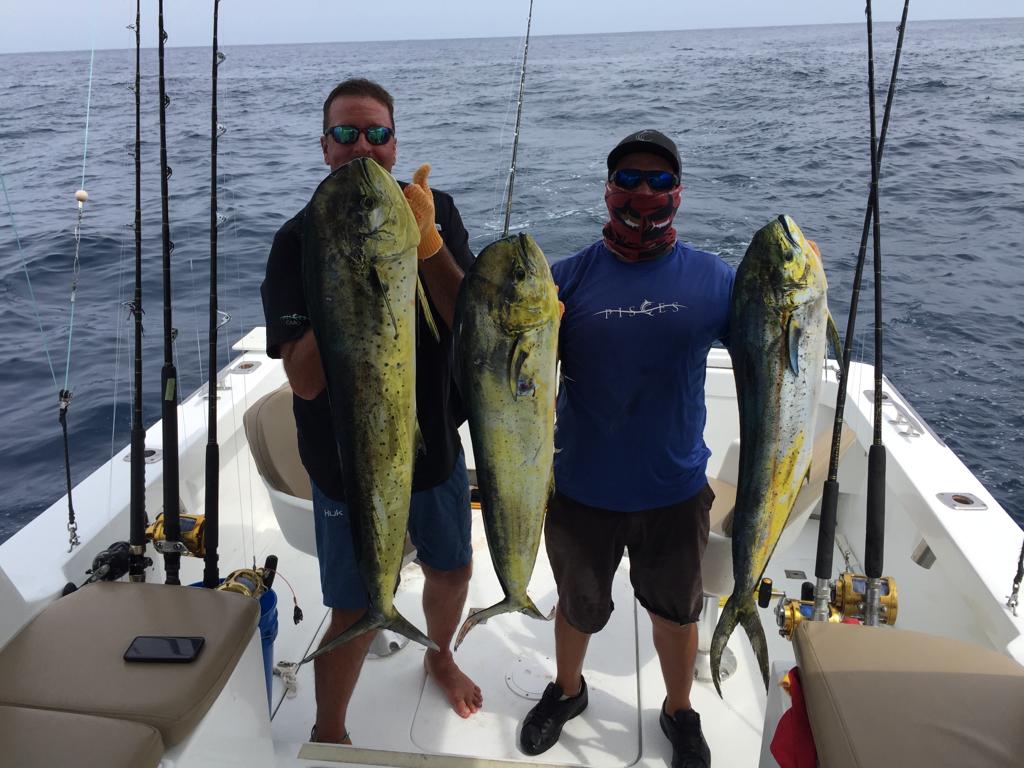 Aaron and Mate Jose Gomez on Pisces 28′ Andrea with 3 of the 4 dorado he kept out of 20 that day!