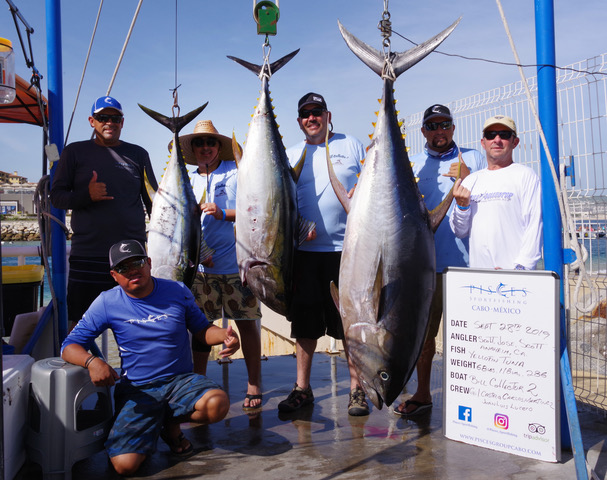 Truly there are no words for the epic fishing of this week. but of course I will try, and I think the best way to explain is by giving you the hard numbers. There were 147 Billfish RELEASED this week by 36 boats. That’s an average of 4 billfish per boat, although we had Pisces 31′ Rebecca for example, released 19 Striped Marlin and 1 Sailfish yesterday, with 10 more marlin bites that didn’t stick. We had quite a few Blue Marlin between 300 and 500 lbs released and Pisces 31′ Tiburon had a GRAND SLAM with 1 Striped marlin, 1 Blue marlin of about 300 lbs, and 1 Sailfish, plus 10 dorado (mahi). Speaking of dorado, there were 237 fish caught total with many released, respecting catch limits. There were very good sizes on the dorado as well, making it easy to pick and choose which ones to take home, from so many caught. For example, top dorado boat Pisces 28′ Andrea caught 22 Dorado in one day, with two anglers on board. They kept fish that averaged 20-30 lbs each. Now for tuna. Only 8 boats targeted tuna this week, but boy did it pay off! The 4 largest yellowfin tuna caught by Pisces 35′ Bill Collector 2 and Pisces 35′ Knot Workin’  were a 68 pounder, 118 pounder, 164 pounder and a cow-sized 286 pound yellowfin. Now if all this doesn’t make you pick up the phone or open your browser or email to book your chance at the most epic fishing you could experience, then I don’t know what will. So while I dissect the details of these catches for you below, i’ll leave this info right here for ya, just in case. 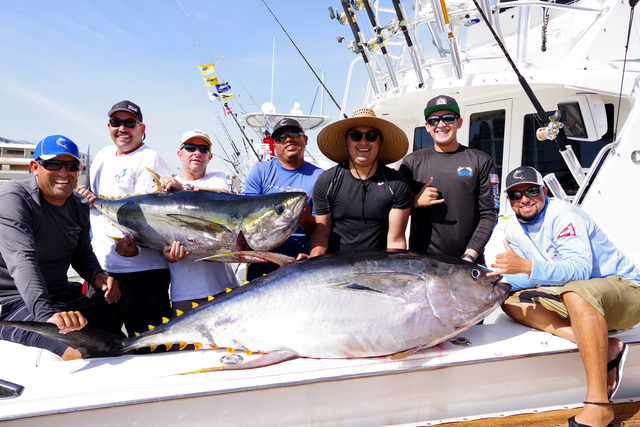 This week’s hurricane Lorena, which luckily resulted only in light showers, closed the port three days from the 20th to 22nd. When port reopened, fishing was back, big time, especially for dorado in the first few days. Pisces 28′ Andrea and anglers Jeff and Marie Rosa from Georgia fished the 23rd, catching 22 dorado and respecting catch limits. The largest was about 25 lbs. Most hit on live or dead caballito, and some on cedar plugs between Pozo Cota and Las Margaritas. The next day, for a half day, Andrea found luck with the dorado again, catching 9 dorado total, all between 15 and 25 lbs each. This time caught at Cerros de Arena on live/dead caballito and pink lures.

This same day, Pisces 30′ Karina landed 9 dorado, between 8 and 30 lbs, hitting on live caballito, ballyhoo and green lures, between los Arcos and Margaritas. Pisces 31′ Rebecca did well with dorado at Los Arcos too, landing 11 between 10 and 25 lbs each (they had 3 more mahi bites that didn’t produce). Anglers from NJ also released 3 Striped Marlin between 100 and 140 lbs each. 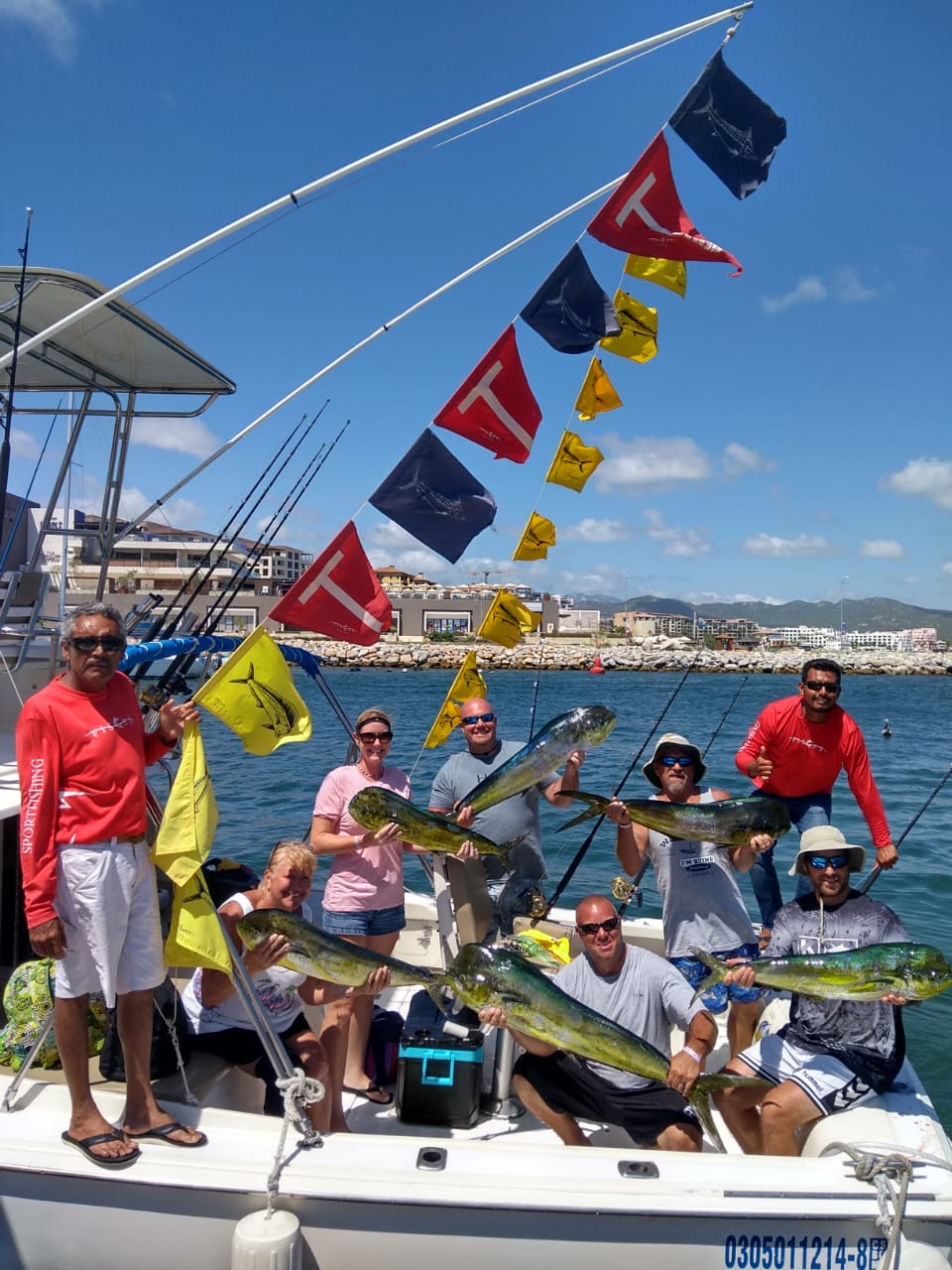 Pisces 32′ Bill Collector didn’t miss the memo, landing 14 dorado and releasing 3, with most ranging between 15 and 25 lbs each and hitting on colorful feathers. They also caught 9 yellowfin on cedar plugs and feathers, with fish weighing between 15 and 30 lbs each at Golden Gate. Pisces 42′ Hot Rod only fished a half day, but also managed to land 6 dorado between 10 and 20 lbs eahc, hitting on ballyhoo, caballito and blue/white lures at Cerros de Arena. 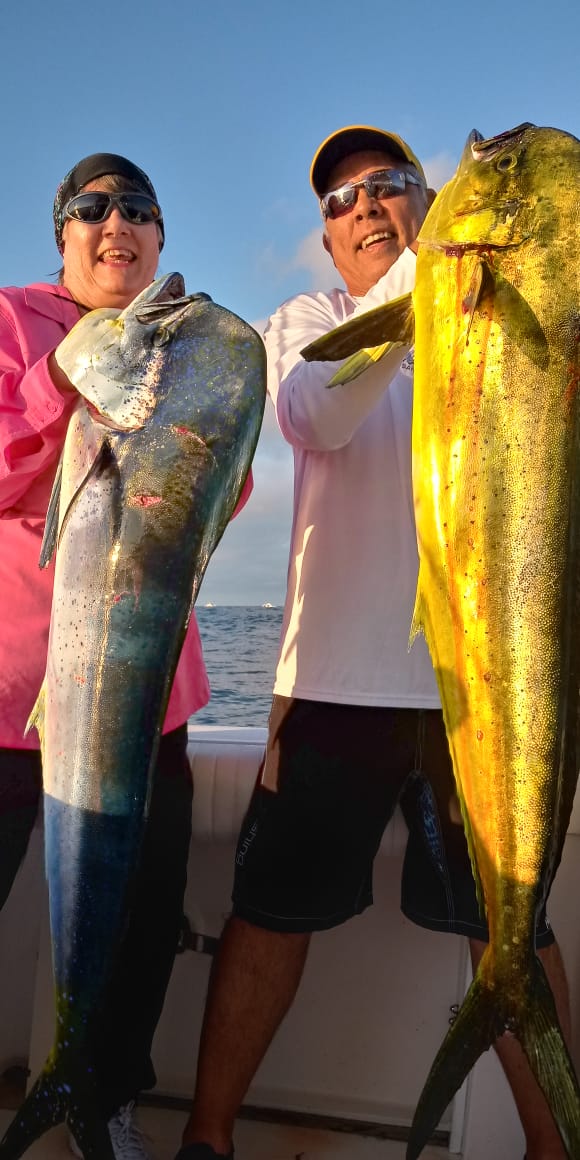 September 23rd was also a good day for Blue Marlin, we saw Pisces 31′ Ruthless release a nice approx. 300 pounder and keep 2 dorados, of 10 and 20 lbs each. The blue marlin hit on a white/blue lure at San Jaime for angler Sean Howley from Canada. Similarly, Pisces 31′ Tracy Ann released a beautiful approx 500 lbs Blue Marlin which hit on a petrolero lure close to the Golden Gate Bank. Anglers Evan Our and Saul Farber form NJ also released 2 Striped Marlin weighing about 100 lbs each and hitting on tigrillo lures in the same area. 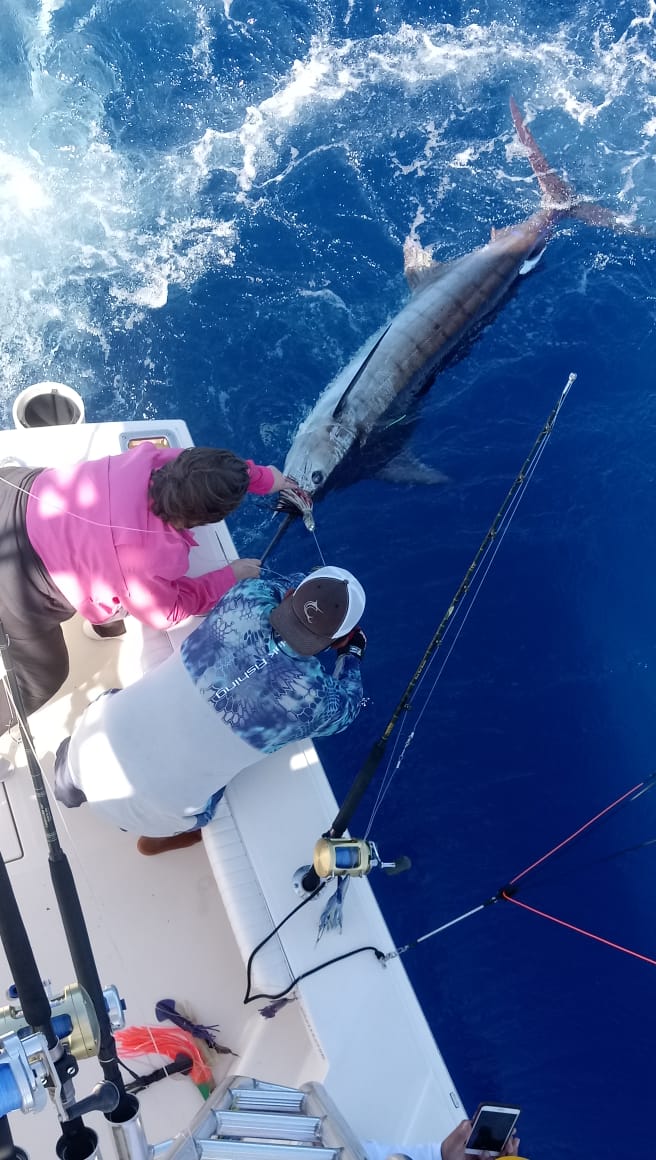 September 24th brought a GRAND SLAM aboard Pisces 31′ Tiburon with one 120 lbs Striped Marlin hitting on dead caballito bait at Pozo Cota, followed by an approx 300 lbs Blue Marlin, released, hitting on a black/blue lure there as well. Lastly a nice sailfish of about 60 lbs which hit on dead caballito bait at Las Margaritas, released of course. Anglers Adan Esparza, Dalton Drury, Gerard DiManna, Craig Sells, Matt Harris, and Neil Trujillo from CO also caught 10 dorado between 10 and 20 lbs on dead caballito and feathers between these two areas.

Marlin catches picked up even more midweek, mostly for striped marlin, with Pisces 31′ Tracy Ann having two great consecutive days. First for anglers Adam Osbeck and David Strickler form TX, who released 11 Striped Marlin weighing approx between 100 and 130 lbs close to Cerritos, and 2 dorado of about 15 lbs caught at Migrino. The next day the Laitala family from AZ went 7 for 11 on Striped Marlin on Tracy Ann, and released 1 Dorado. The 28′ Andreadid well with 8 striped marlin released, the largest of about 130 lbs, by Aaron and Jack Tipton form Texas, with fish hitting on live bait and lime green lures. 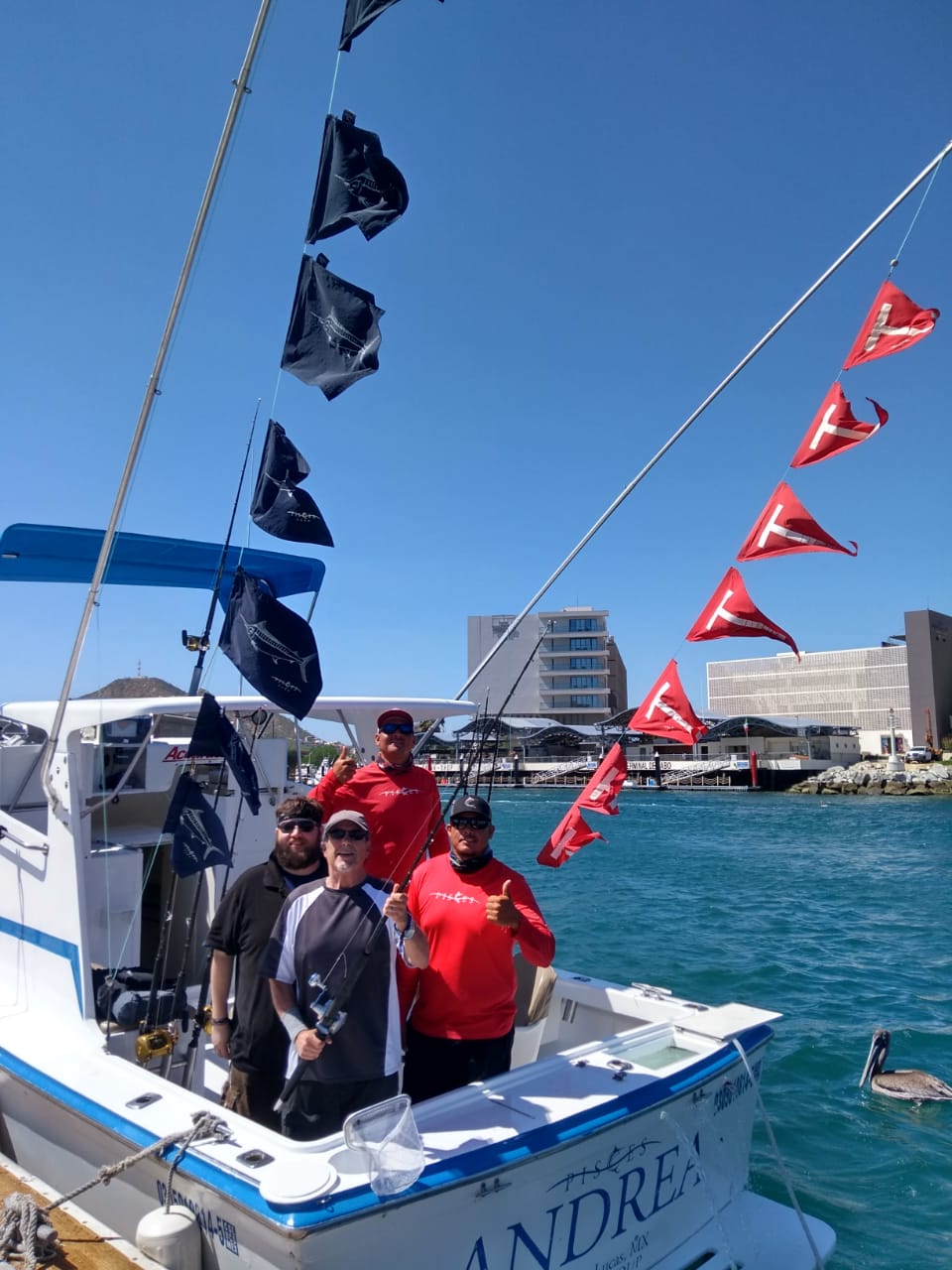 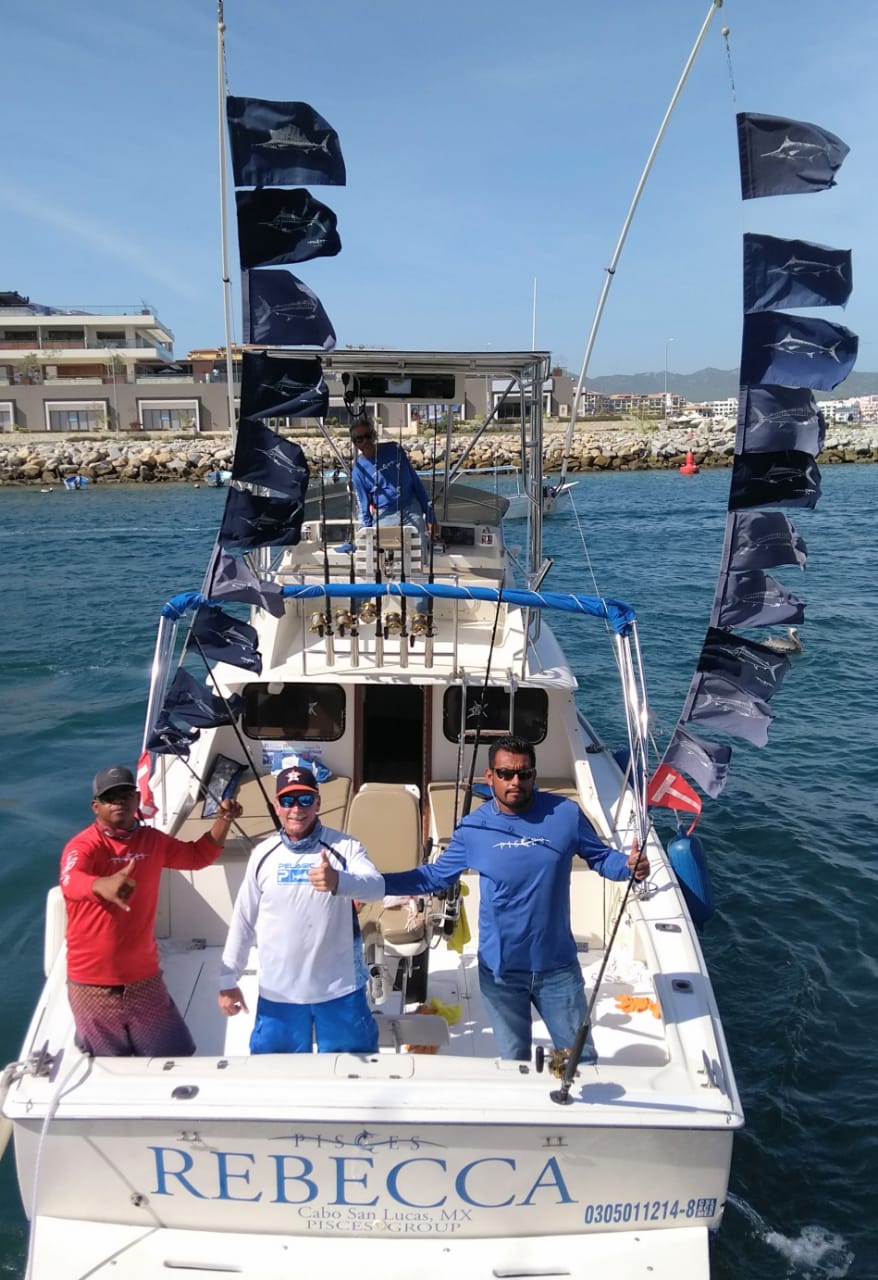 Pisces 31′ Rebecca went 7 for 15 on striped marlin this day too, plus 1 sailfish also released. Family of anglers the Porerfield’s from TX, used live and dead caballito mostly, near Cerritos area. The next day (yesterday) there was no stopping them, they had a total of 30 marlin bites, managing to successfully catch and release 19 and 1 sailfish. Star angler and longtime friend of Pisces, David Palmer aboard along with deckhands Luis Cota, Fernando Noyola (of Pisces 31′ La Brisa) and Captain JR. The striped marlin ranged from 150 to 70 lbs and the sailfish was about 80 lbs. They hit on live bait mostly, close to Cerritos. 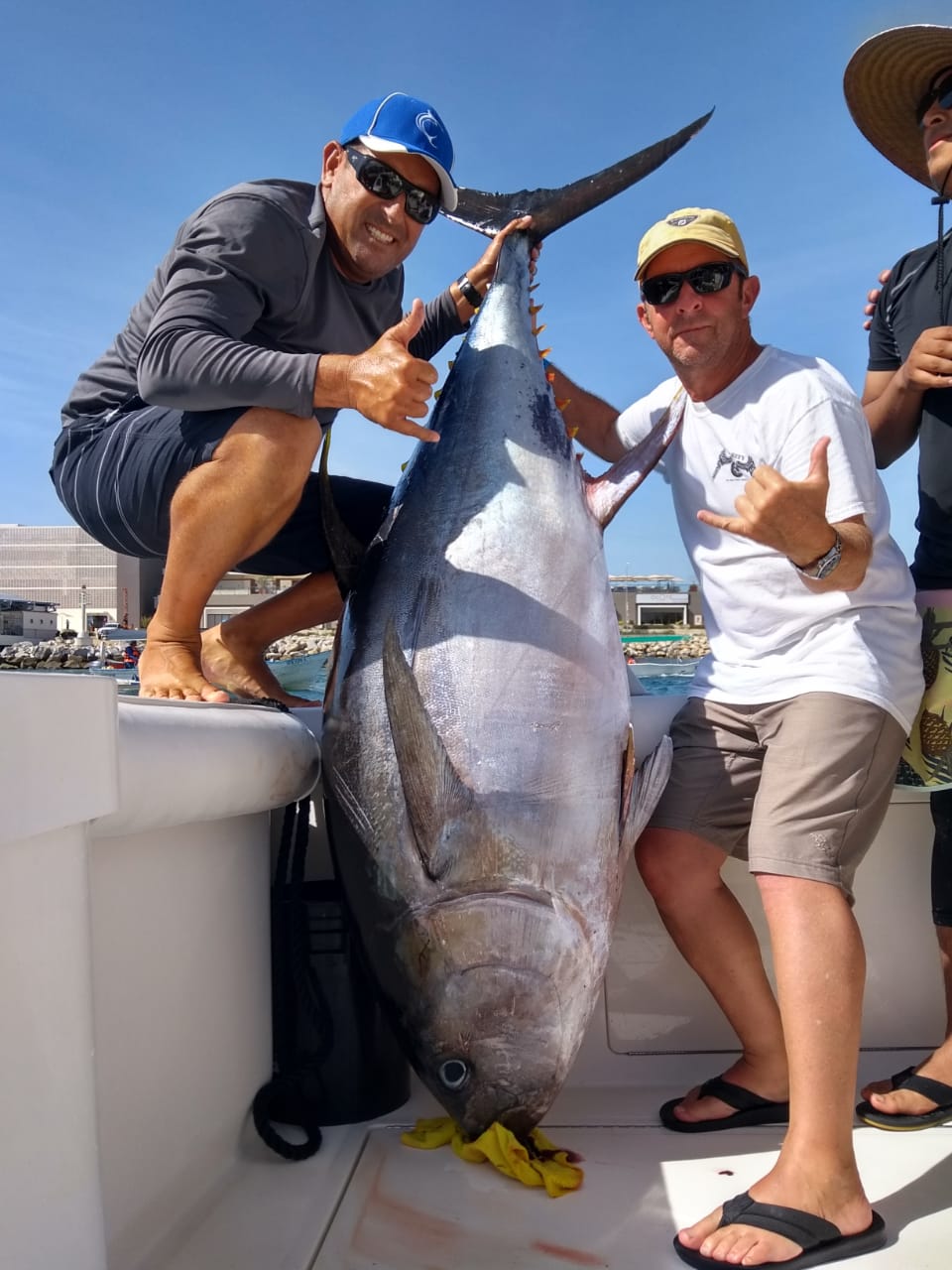 Tuna this week, although seldom targeted by anglers produced excellent results.  Pisces 35′ Bill Collector 2  had angler Scott Schade accompanied by Jose Castro and Jose Arredondo for two days. After fishing for dorado and marlin successfully the first day (2 Striped Marlin, 1 sailfish and 10 dorado) he decided to give tuna a shot. They landed 3 yellowfin, one of 68 lbs, the other 118 lbs and lastly, a cow-sized tuna that weighed in at 286 lbs on our IGFA Certified Scale. Two hit online caballito bait and one on the kite with “flying fish” lure. It took Scott 2 hours to get the largest tuna to the boat and were back at the dock by 3:30 pm. 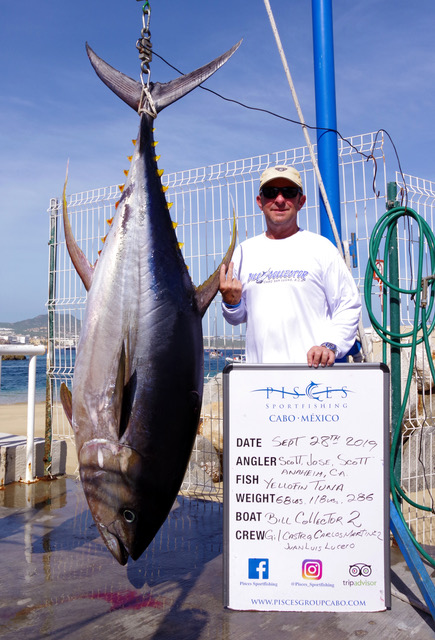 This same day, Pisces 35′ Knot Workin’  who also had anglers Alejando Mejia, Amador Torres and Don Briscoe aboard for two days. They  had targeted dorado on their first (4 dorado of about 15 lbs), and headed to Los Arcos for more, but after landing 2 dorado early on, they decided to try their luck for tuna or marlin at San Jaime Bank. They released 2 striped marlin and then set up the kite, landing a nice 168 lbs yellowfin. 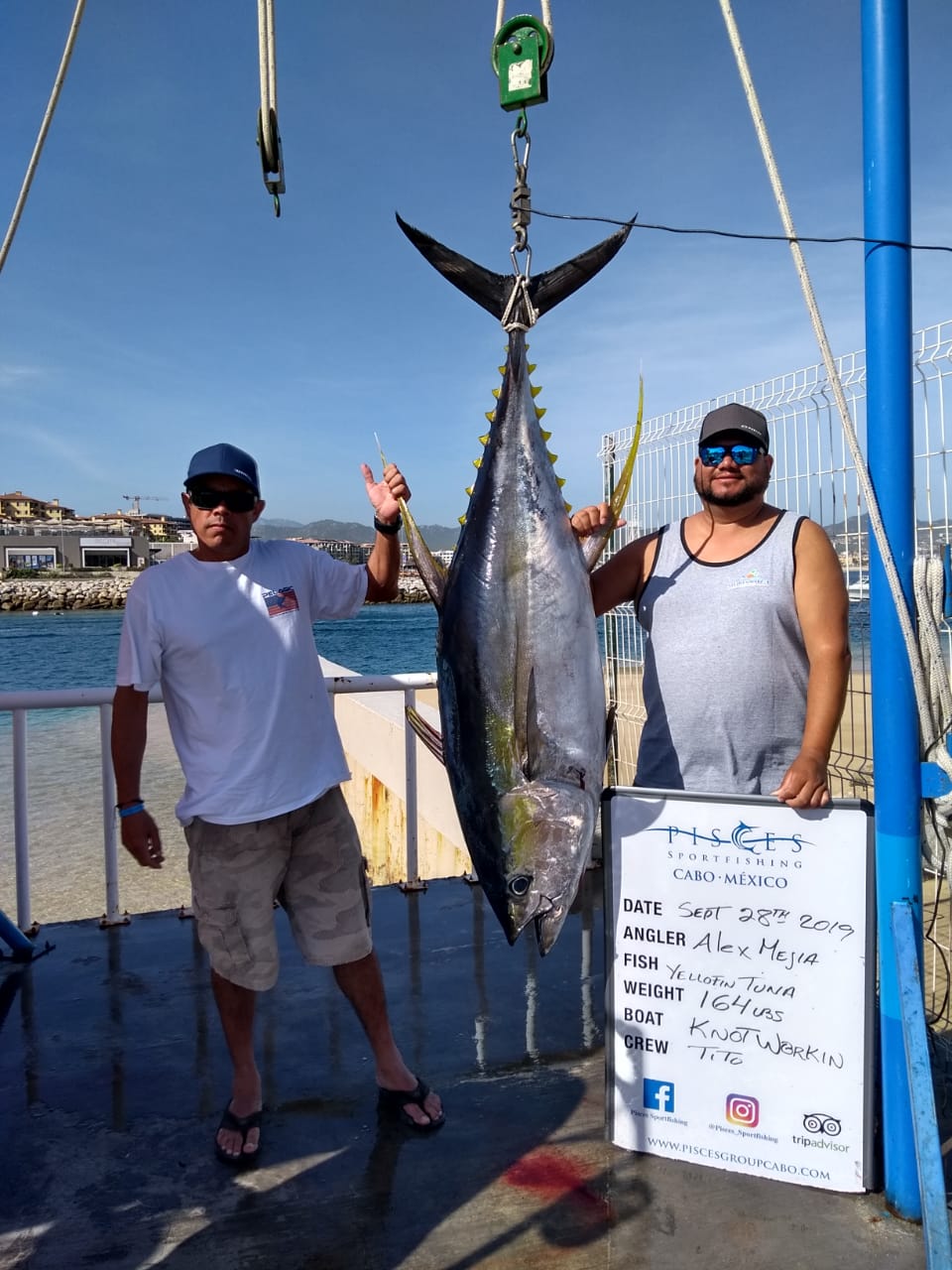 WEATHER CONDITIONS: Some wind picking up of about 10 -25 km/h toward the end of the week, and some intermittent swell. Average wave height overall 3 feet.