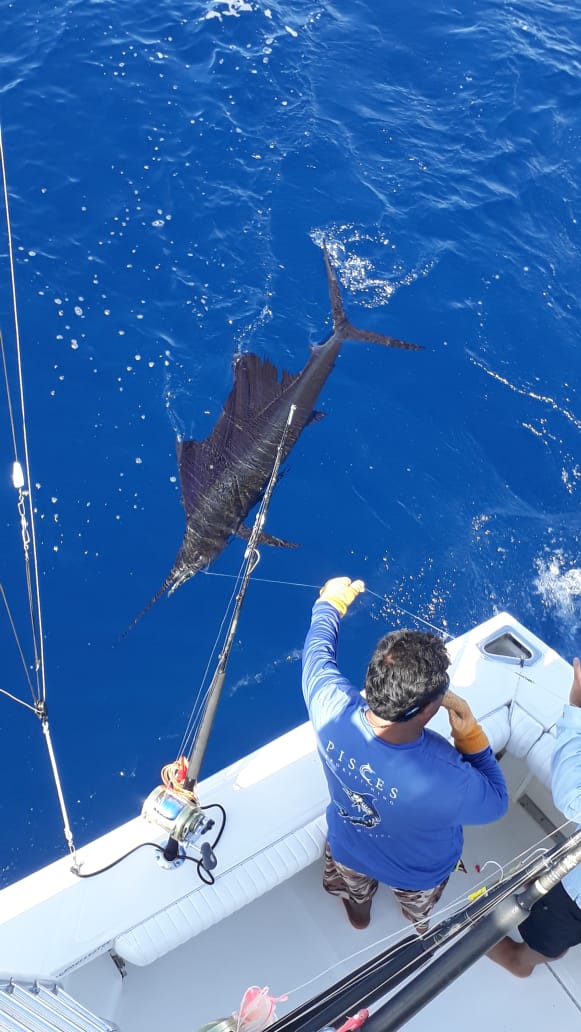 An extraordinary week for billfish this week, with FOUR BILLFISH GRAND SLAMS! For those not familiar with the term, a grand slam is when an angler catches three different billfish species in one day. Not to mention, large billfish too, with the biggest, a black marlin, of about 450 lbs.

Our first grand slam of the week was by Pisces 48′ Viking Listo, with anglers aboard being Marshall, Newman, Payton and Thomas Carrell from Texas.  The group had their hands full as they caught and released 1 sailfish on caballito bait, 2 blue marlin of about 250 – 280 lbs each, also on caballito, and 1 black marlin of about 130 las on a black and red lure. All fish were caught between the 95 Spot and Cerro Colorado. 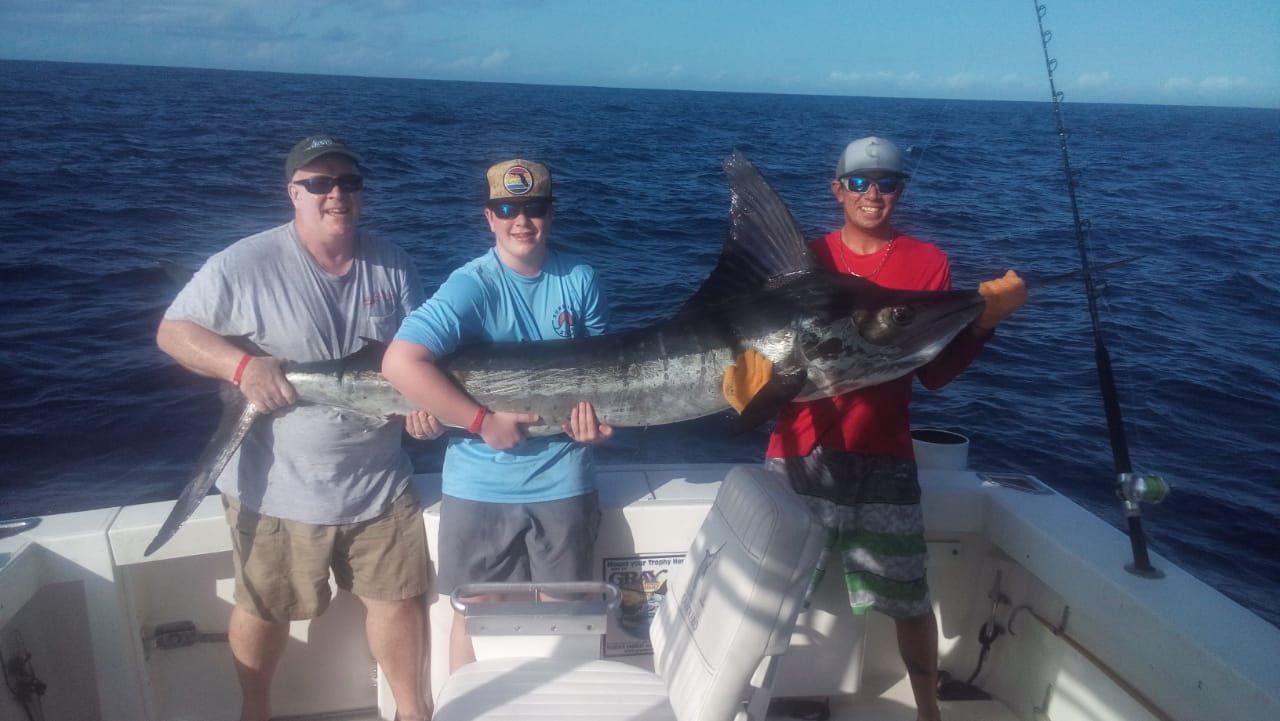 Our second grand slam of the week was by Pisces 31′ La Brisa, on October 2nd with anglers from San Jose, CA catching and releasing 1 striped marlin, 1 sailfish and 1 blue marlin, all at the 95 Spot on caballito bait.

October 5th brought the third grand slam of the week with Pisces 31′ Tracy Ann and anglers from Millbrook, New York catching and releasing 1 striped marlin, 1 sailfish and 1 blue marlin of about 200 lbs. All fish were again caught on caballito, this time at the 11:50 Spot. They also managed to catch two small tunas of about 15 lbs. What a day! Their previous day fishing with Tracy Ann and they caught 4 sailfish! The sails were caught again between the 95 and 1150 Spot on caballito bait and were released; they averaged about 60 lbs each.

Last but not least, Pisces 31′ Rebecca closed out the week with the fourth grand slam: 1 sailfish, of about 90 lbs, 1 blue marlin (220 lbs approx) and 1 small black marlin of about 150 lbs. All fish were released out at the 11:50 Spot, and hit on  live caballito bait. The Rebecca did very well, heading out to the Finger Banks earlier on in the week, and caught and released 8 striped marlin on mackerel bait. This on September 30th by anglers Shawn Bexson and Shawn Rice from Minnesota. The next day, the Rebecca and anglers from Wisconsin tried their luck at the Finger and landed 7 striped marlin, all between 100 – 130 lbs approximately. All fish were caught on Mackerel and released.  This same day, Pisces 31′ Tracy Ann headed to the Finger and caught 8 striped marlin between 100 and 140 lbs on mackerel, for anglers from Oklahoma. 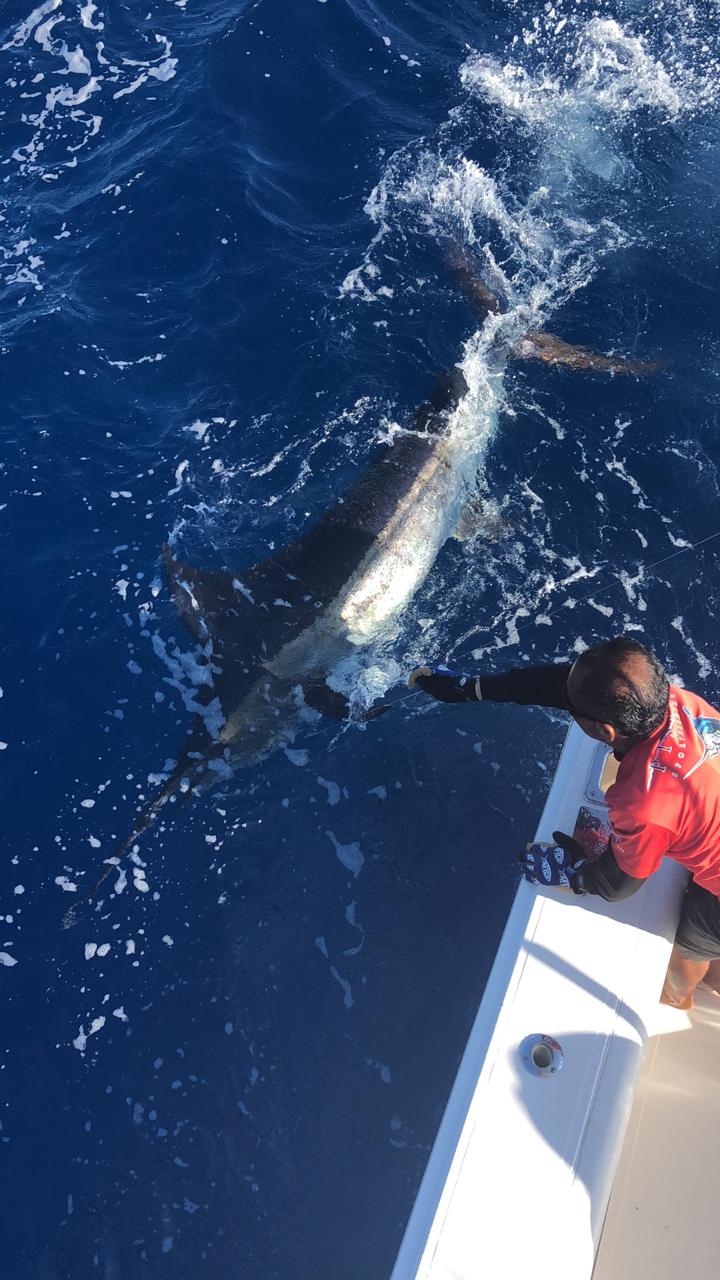 Other notable billfish catches were some large black marlin caught; giving us some good insight for the upcoming tournaments. Pisces 31′ Cabolero caught and released an approx. 450 lbs black marlin, which anglers the Tuckers and Osborne’s tagged outside of the 95 spot. The fish hit on guacamayo lure, followed by a blue marlin caught and released, gain on guacamayo in the same area.

Pisces 32′ BillCollector also caught a nice blue, of about 350 lbs, which they released out at the 95 spot. It hit on live caballito bait, fought by angler Alan Cave from Massachussets. 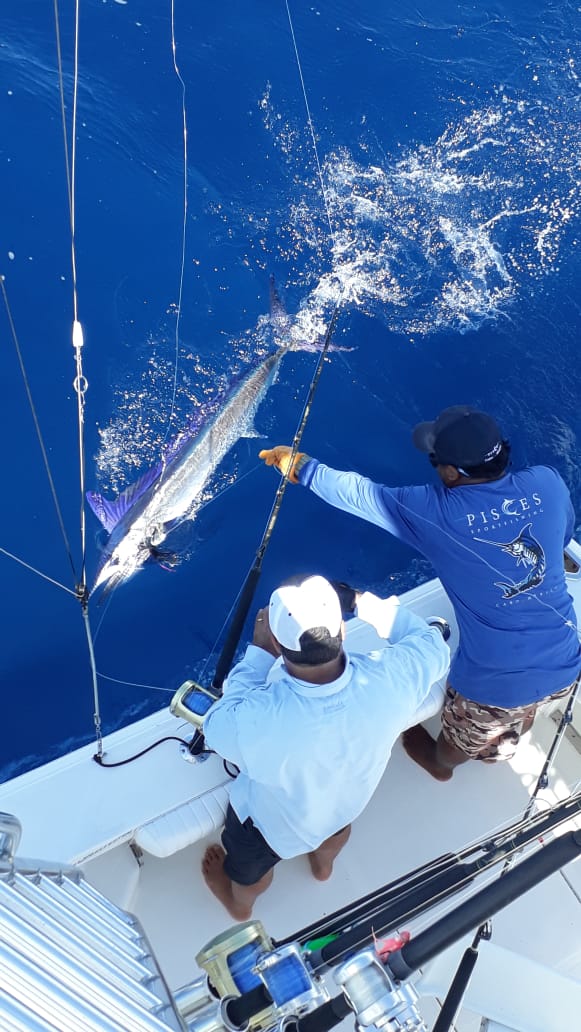 The dorado have been found more regularly this week, with most caught ranging between 10 – 25 lbs each and tuna catches still steady; mostly in the 20 – 45 lbs range  and with some boats catching up to 20+ fish each. Those who chose to fish inshore did well to find many rooster fish and sierra. 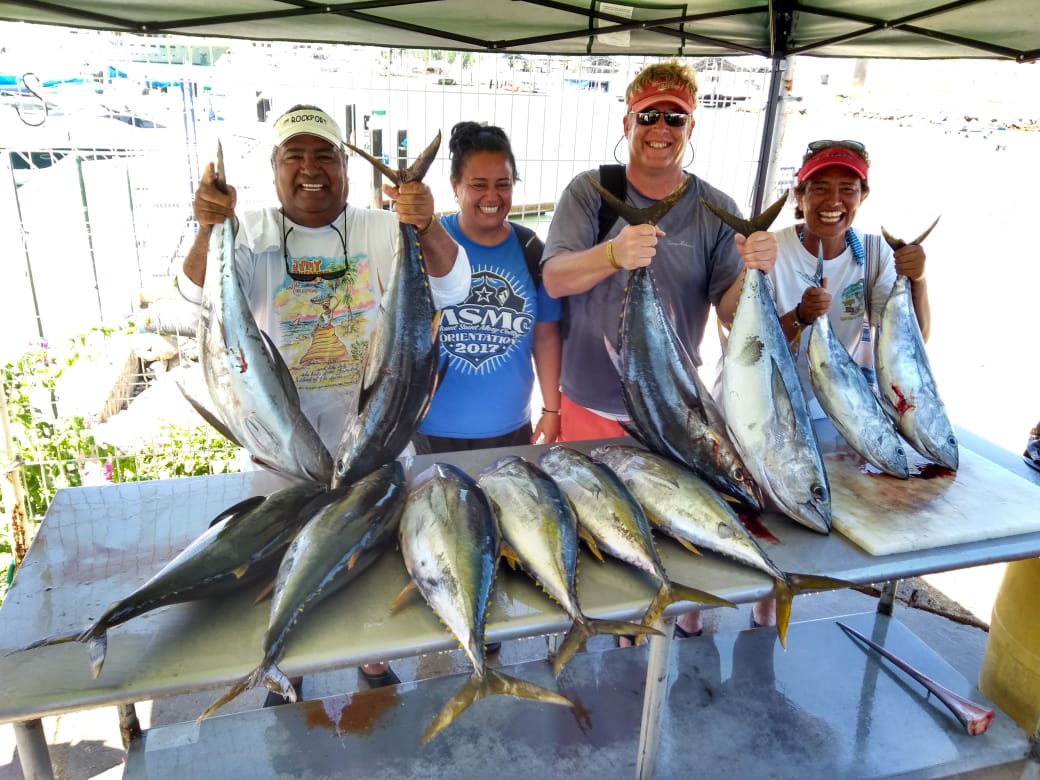