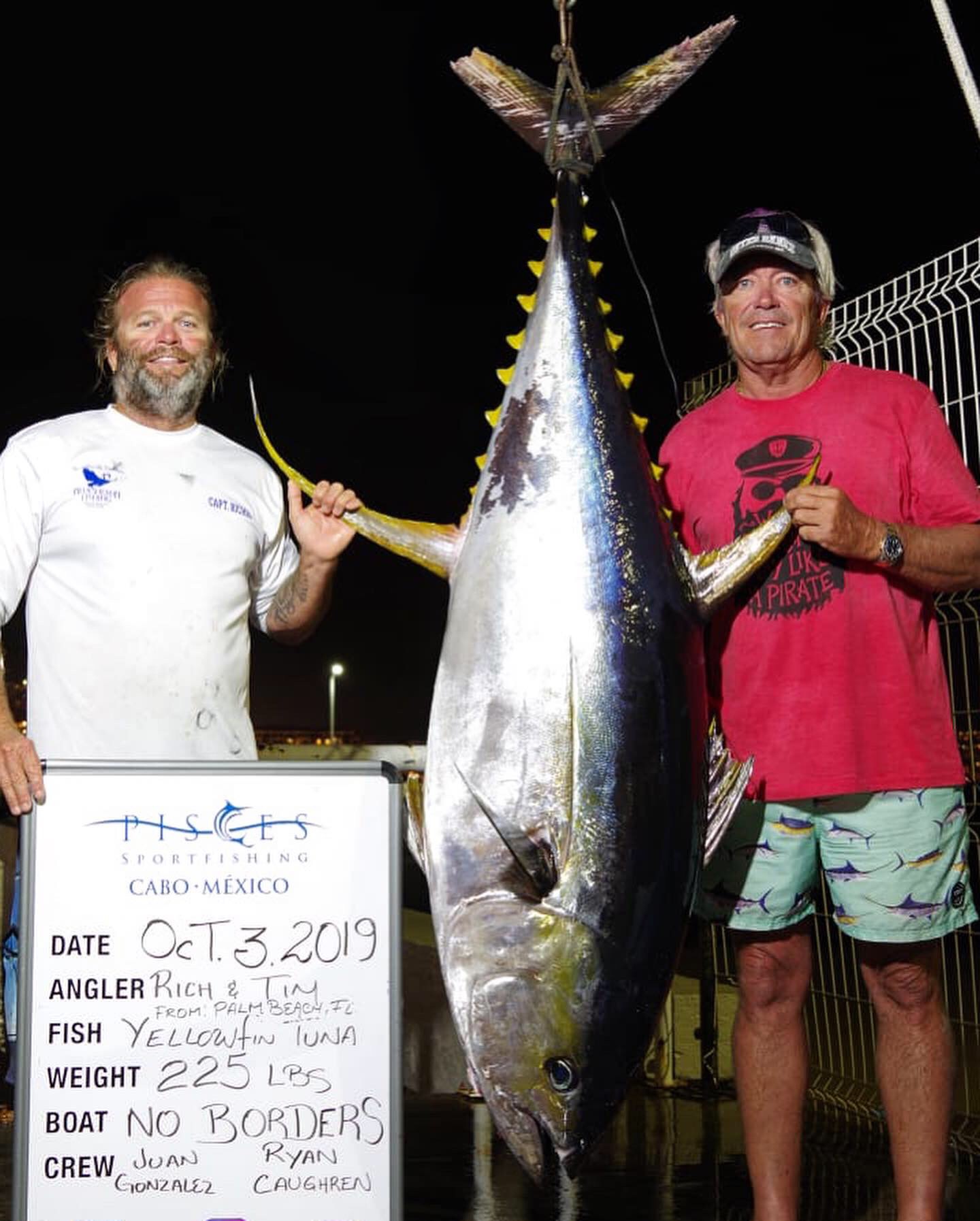 Tournament season is officially around  the corner, and the conditions and fishing could not be any better for it. Striped marlin catches are still off the charts good, the fleet released 277 marlin total this week, with a steady number of Blue marlin making up part of this too, averaging 200 – 300 lbs each.  Dorado continue in very good numbers, a total of  281 caught this week, with catch limits respected and fish ranging from 25 to 40 lbs easily. Highlights for Yellowfin Tuna on the bigger side were a 80 lbs tuna on Pisces 35′ Knot Workin’, then two just over 100 lbs caught on Pisces 31′ Tracy Ann on consecutive days, a 153 pounder on Pisces 32′ Bill Collector, and a 225 lbs Yellowfin on Pisces 25′ No Borders. We had a total of  63 Yellowfin caught in the fleet and a few wahoo sprinkled in too. But the best of all, its not only been good, but its been consistent, with 97% catch success rates for 100 Pisces boats fishing this week. Weather has been nice except for the wind, which has made long runs out for tuna and marlin a bit uncomfortable, but with the quality fishing found at the grounds, we can’t complain. 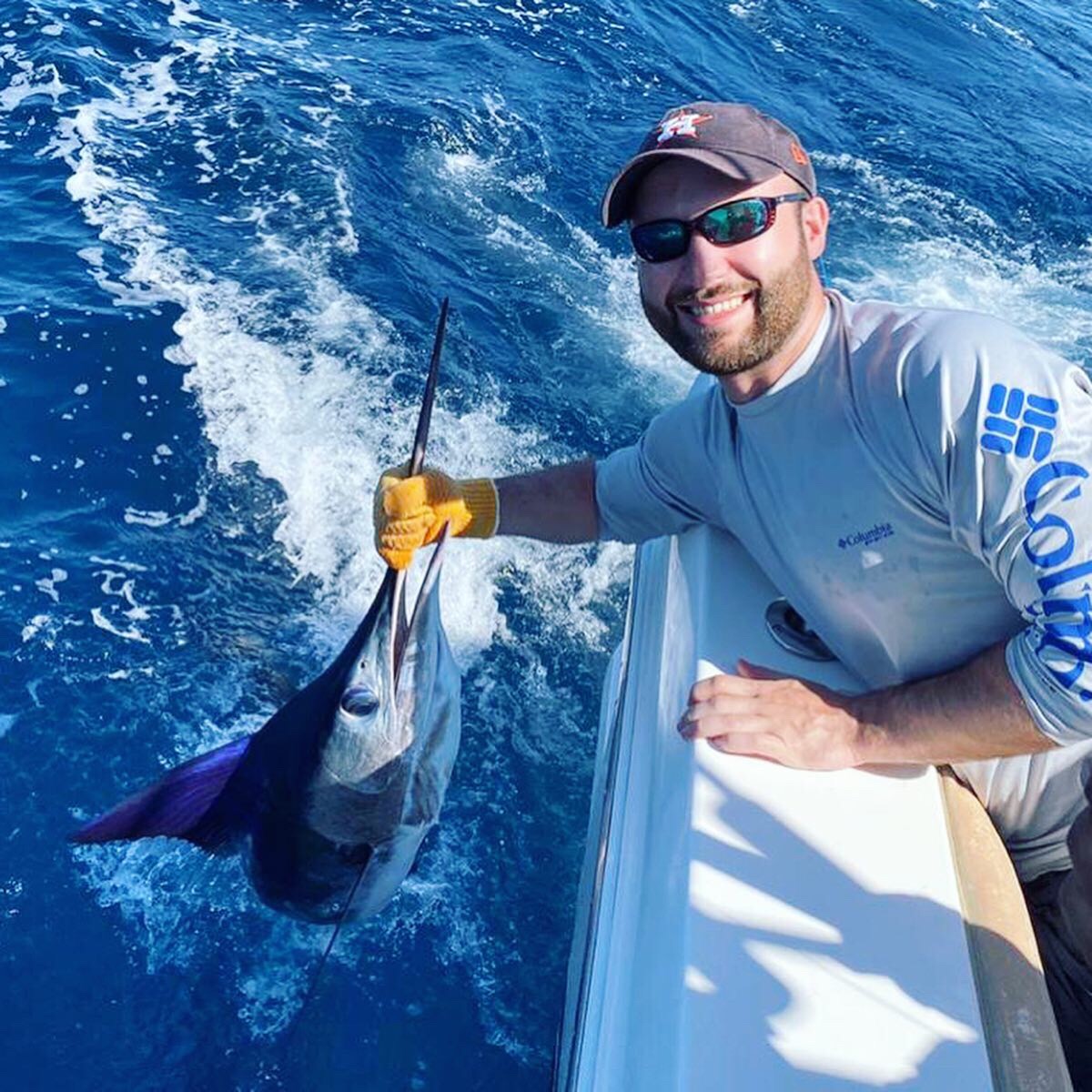 Quite a few of the big boys came out to play this week, with tourney season approaching; and they showed us what they are made of. Pisces 72′ Viking, “Tag Team” reported about 30 or so marlin bites, releasing 22 for anglers Ben Cortright, Eric Schaefer, Frank Vierling and Barry King. They also kept 3 nice dorado which hit on lures: tigrillo, lime green at Migrino. Marlin all hit on trolled ballyhoo close to Punta Lobos up the Pacific. Stripes ranged from 90 to 150 lbs each. On another day out Pisces 72′ Tag Team and the Hunt family from Texas went 5 for 12 on striped marlin, again at Punta Lobos, and 2 sailfish released as well. The sailfish were about 80 and 100 lbs each, and hit on ballyhoo, as did the marlin, which were around the same size. 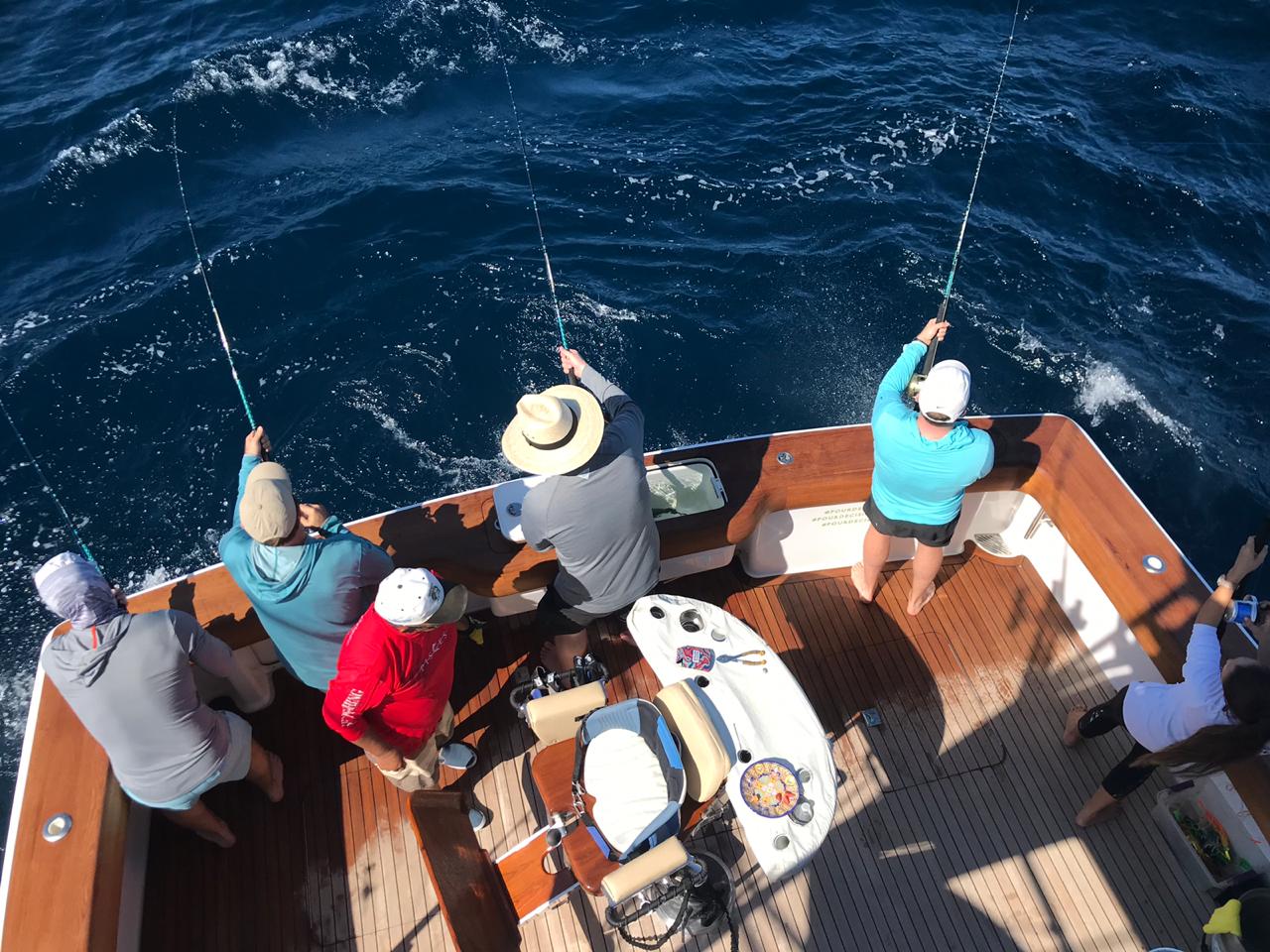 Pisces 61′ Viking “Pour Decisions” also reported 22 Striped Marlin last Sunday, and this week released 15 stripeys, which included landing a jaw-dropping septuple hook-up, yes that seven at once, and they got them all to the boat and released successfully. Big thumbs up to Captain Nayo Winkler, anglers and Crew for that one.  They also used ballyhoo bait and fished slightly south of Punta Lobos, at el Carrizal. They kept one dorado that hit at Gaspareno, of about 30 lbs. Anglers were Brian Baumgarten and friends.

The smaller (but still mighty) Viking of the fleet, Pisces 37′ Viking Billfish BBII (Formerly Tag Team III) did very nicely this week too. Captain and mate Oziel Winkler and Mate Hector Winkler, did well to release 13 striped marlin with solo angler aboard, Ross Kline, from Reno, Nevada. Marlin ranged in size form 90 to 1450 lbs and hit on live caballito and ballyhoo bait. They also landed 6 dorado of about 20 lbs off of Cerritos.  On another outing they had 9 striped marlin, and 1 sailfish, this time for angler Eric Schaeffer and friends, who fished out of Cerritos again.  And still, another day produced 7 striped marlin released at Punta Lobos on ballyhoo with marlin ranging from 100 to 130 lbs. They also kept 3 dorado of about 15 lbs, which hit on ballyhoo.

Pisces 42′ Caliente did well with going 12 for 9 on striped marlin and one blue marlin released October 4th, with stripes ranging from 70 to 100 lbs, and the blue of about 180 lbs. They caught them on ballyhoo at Cerritos, along with 5 dorado which hit on blue/white lure and ballyhoo at Gaspareno.

Pisces 42′ Yahoo did well this week too, with a total of 15 striped marlin bites, producing 10 releases and 2 sailfish caught this week, all between Punta Lobos and La Ballena, plus 3 dorado of about 35 lbs each on ballyhoo and feathers.

The Pisces Bill Collector team did very well this week with several blues, striped marlin and nice 157 lbs yellowfin. 35′ Bill Collector 2 released 6 striped marlin for the Wilson’s from California, on ballyhoo at Punta Lobos. Then, for anglers J., Adam and John Hanson from Omaha, Nebraska: 2 Blue marlin, one of about 200lbs and the other about 260 lbs which hit on a pink/blue lure at Vinorama. And another Striped Marlin on dead caballito of about 120 lbs. 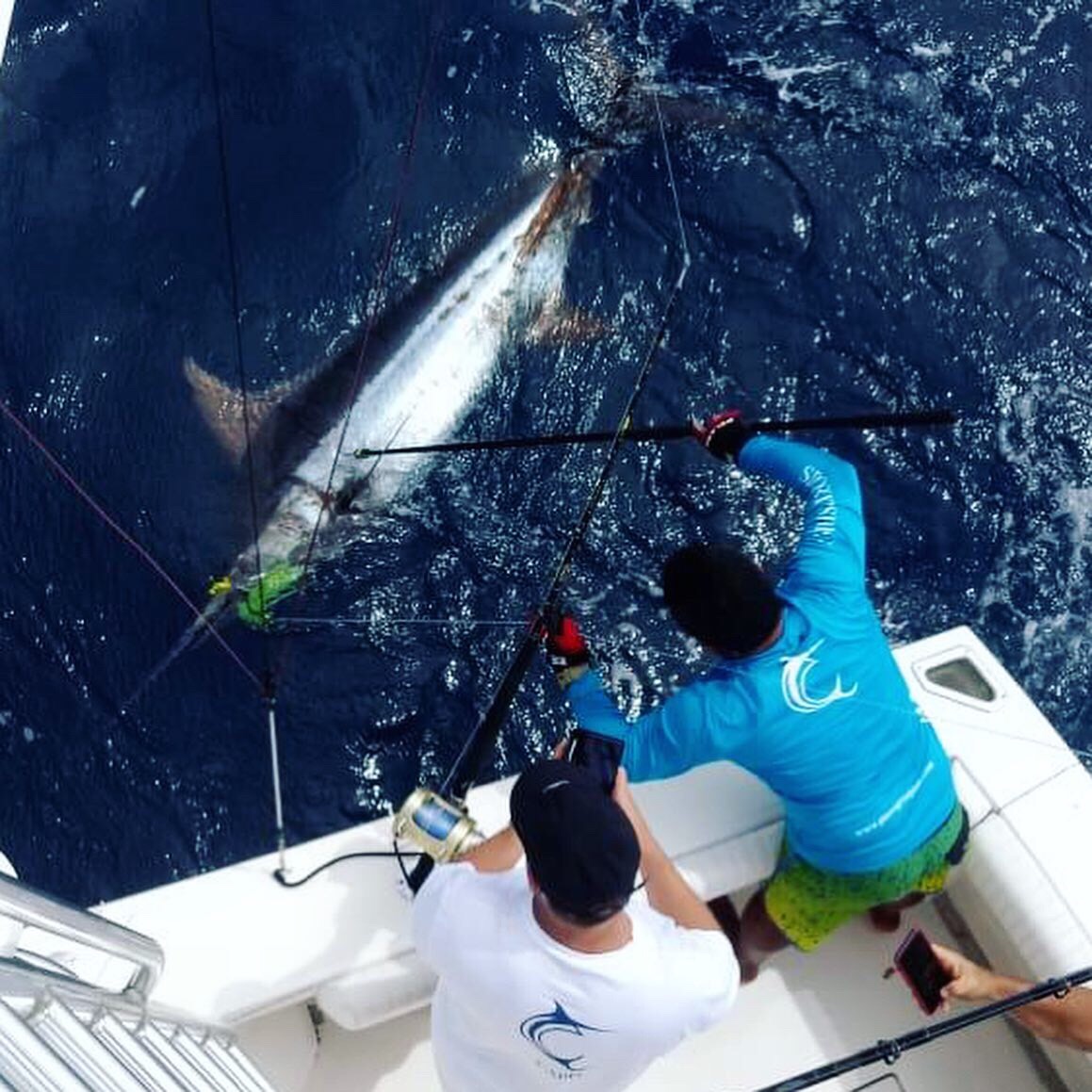 The 32′ Bill Collector had a similar day with 2 Striped marlin and 1 Blue of about 250 lbs hitting on a green/yellow lure at Migrino and Striped hitting on dead bait at Pozo Cota, with 6 dorado taking dead bait and feathers for anglers Diana and Steve Belknap who celebrated their 8th anniversary this day! Accompanied by Ilan and Kristin Frank. Big tuna For Allen Cordy and Ronnie Hittesdorf form CA, who landed 4 yellowfin, the largest weighing 153 lbs, which hit on the kite at the 11:50 Spot. Others hit on cedar plugs. 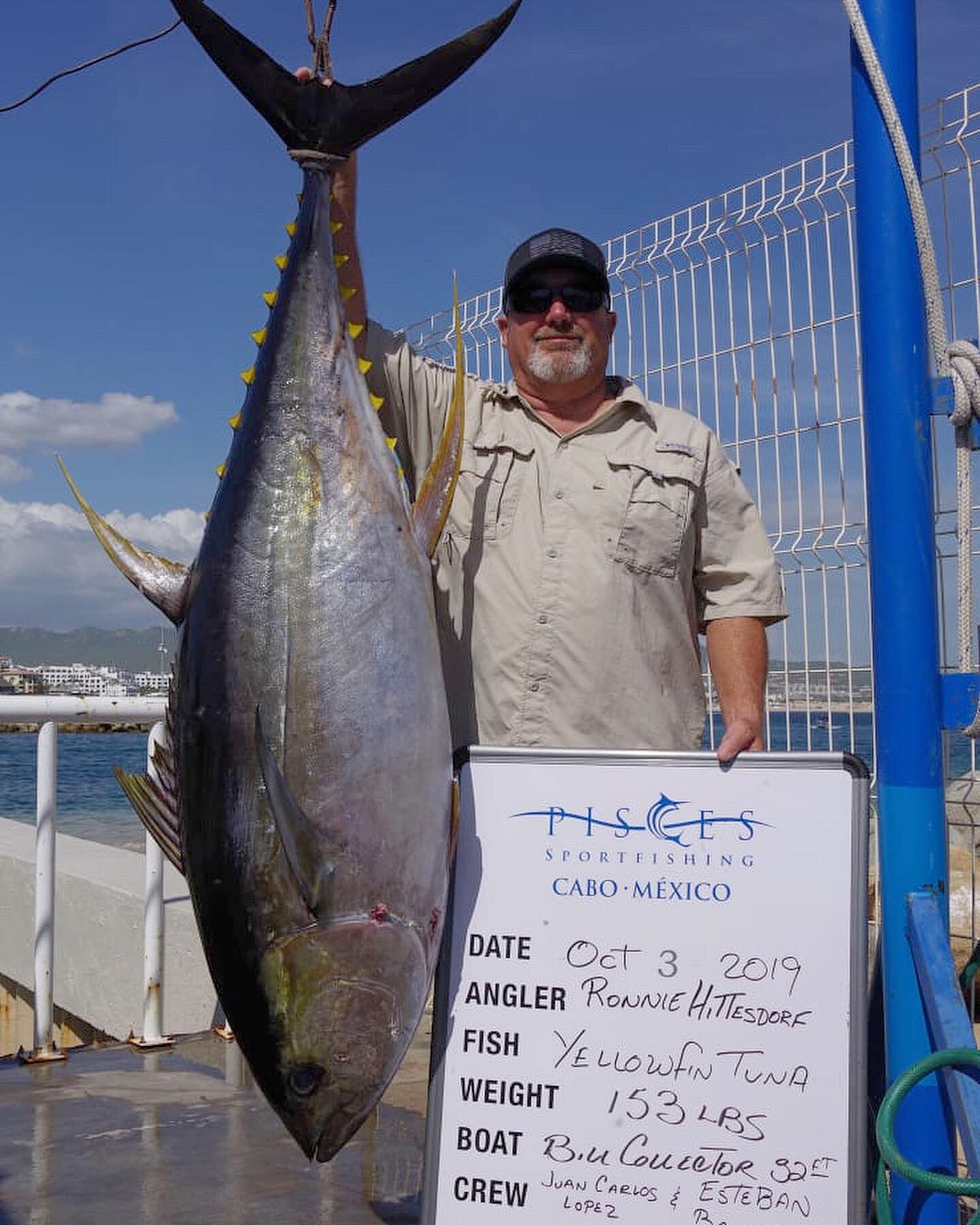 Pisces 31′ Tracy Ann had two consecutive tuna days, the first brought a 115 lbs yellowfin on a yummy flyer on kite at La Ballena for anglers Mike Martinez and Patricia Romero. They also went 2 for 3 on Striped marlin released, 0 for 1 on blue Marlin, and kept 9 dorado of about 20 lbs each which hit on guacamayo lures, and caballito and mackerel bait at Migrino. 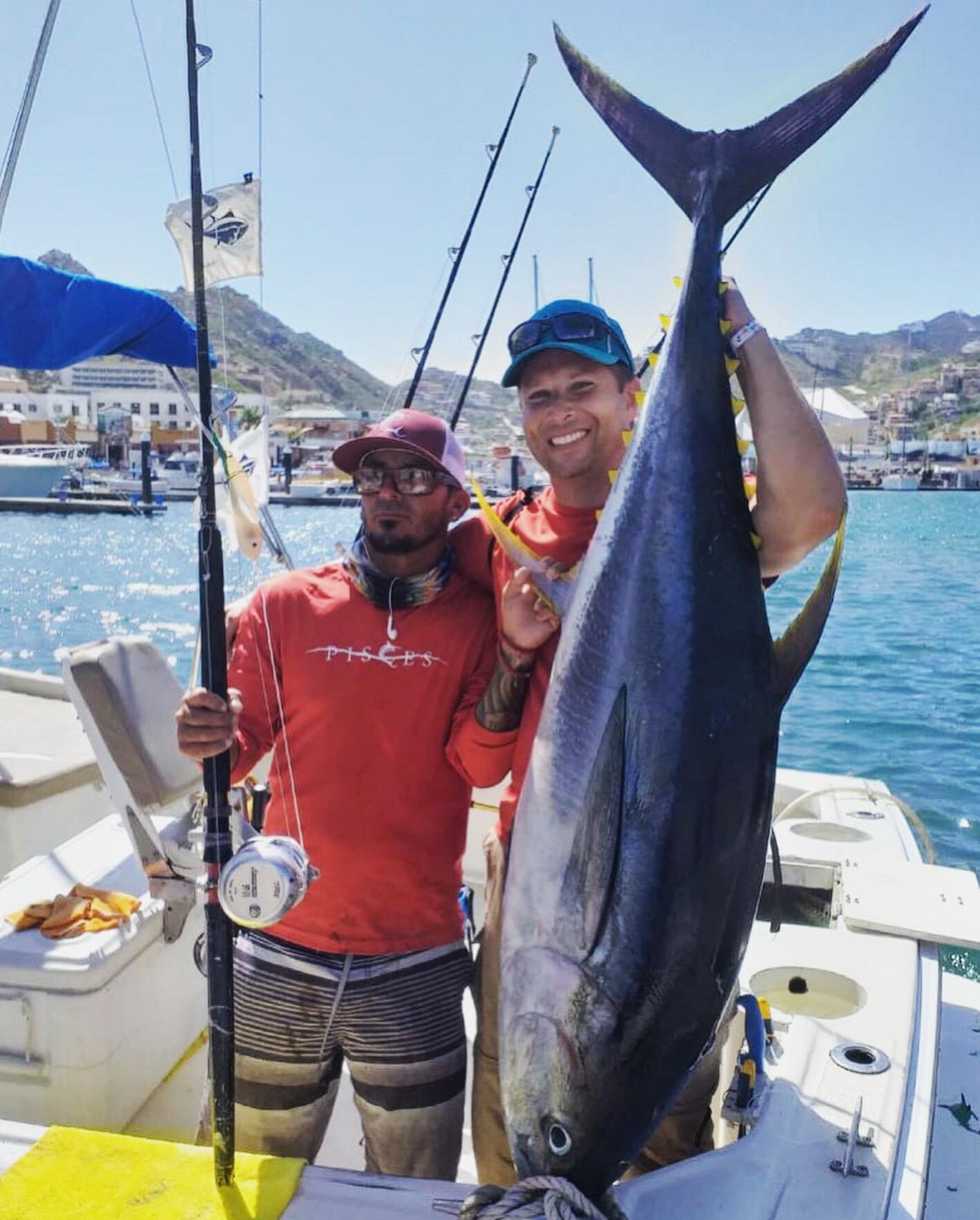 1 of 2 Big Yellowfin Caught on Pisces 31′ Tracy Ann this week. 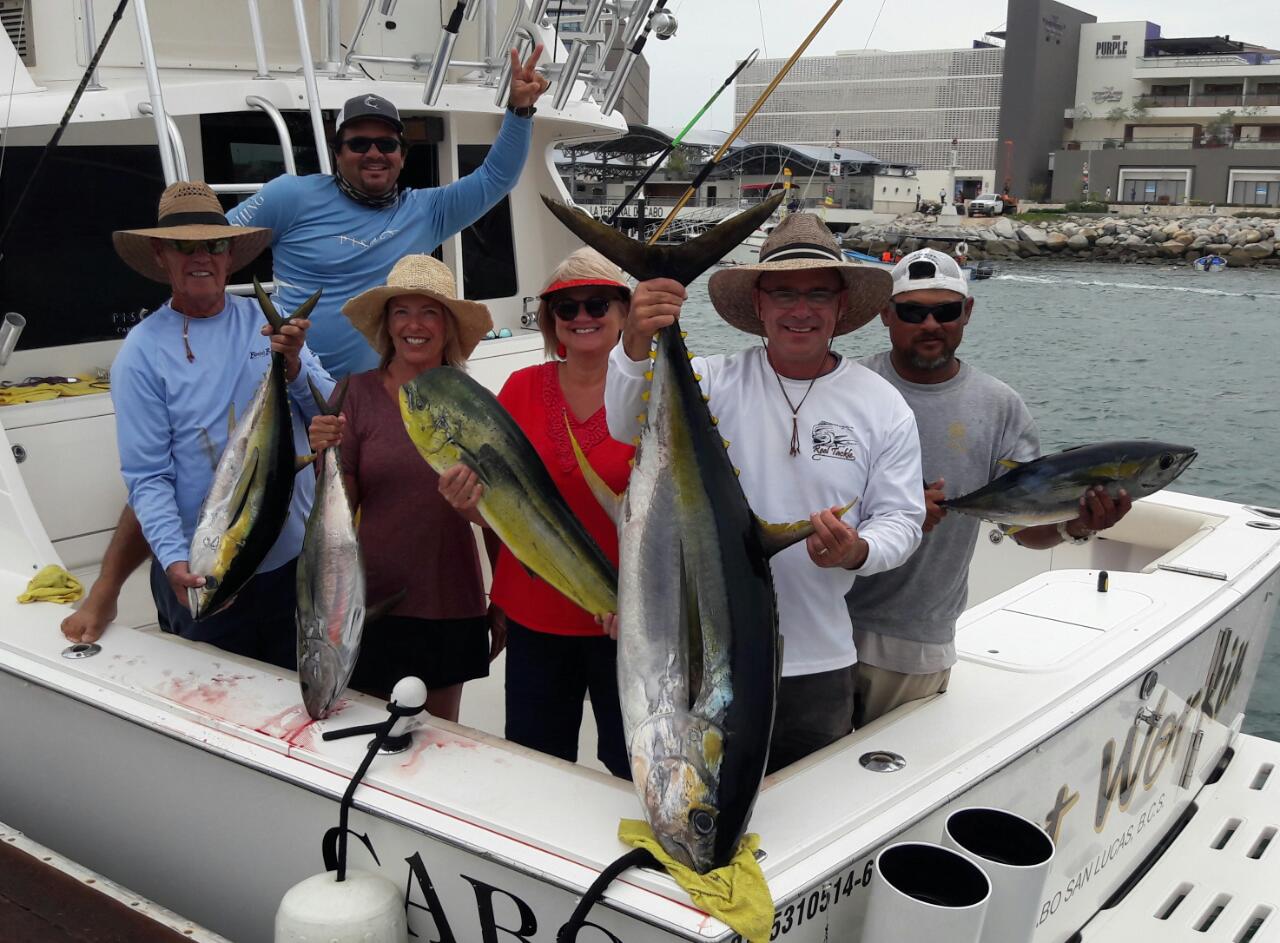 The next day 31′ Tracy Ann released again 1 Striped marlin of about 120 lbs at Golden Gate and landed 11 yellowfin, the biggest weighed in at 107 lbs, landed on the kite, and new Accurate reel, this time for anglers from Texas.

This same day Pisces Cape Horn Center Console 25′ No Borders landed a 225 lbs yellowfin which, as Captain Ryan Caughren describes, “exploded 4 feet out of the water destroying the yummy flyer”. The battle to land this fish took an epic 6 hours, with anglers Capt. Richard Angel and Tim Attaberry form Lantana, FL, tag-teaming the fish. Both Richard and Ryan described this as one of the strongest yellowfin tuna they’ve ever encountered, and they’ve encountered many. They also had an approx 150 lbs yellowfin on the other line which they lost, and one more 15 lbs yellowfin. Anglers finally made it to the dock at 9:30 PM where dock master Mario Banagas was patiently waiting along with the fillet station guys. Great work by the Pisces Team on this one.

And as if this wasn’t all enough, we can’t leave out the remarkable fishing on Pisces 31′ Ruthless, with Captain Beto Lira at the helm, making this Bertram our top boat this week in terms of consistency, sheer quantity and species caught daily. A few highlights here: Anglers Robert Menotti and Kendra Funk released 2 Striped Marlin of about 120 lbs each, 1 Sailfish and 25 dorado! (21 released respecting catch limits). Dorado hit on all different colored feathers at Migrino and they also released a small Amberjack.

Literally, the next day, the 31′ Ruthless did it again, this time though, it was 10 Striped Marlin, 1 Sailfish, 14 dorado, 1 Sierra and 1 Bonita! All for anglers J.,  Adam and John Hanson who also fished on the Bill Collector.  Captain Beto covered a lot of ground fishing La Ballena, Golden Gate Bank and Golden Gate shoreline. 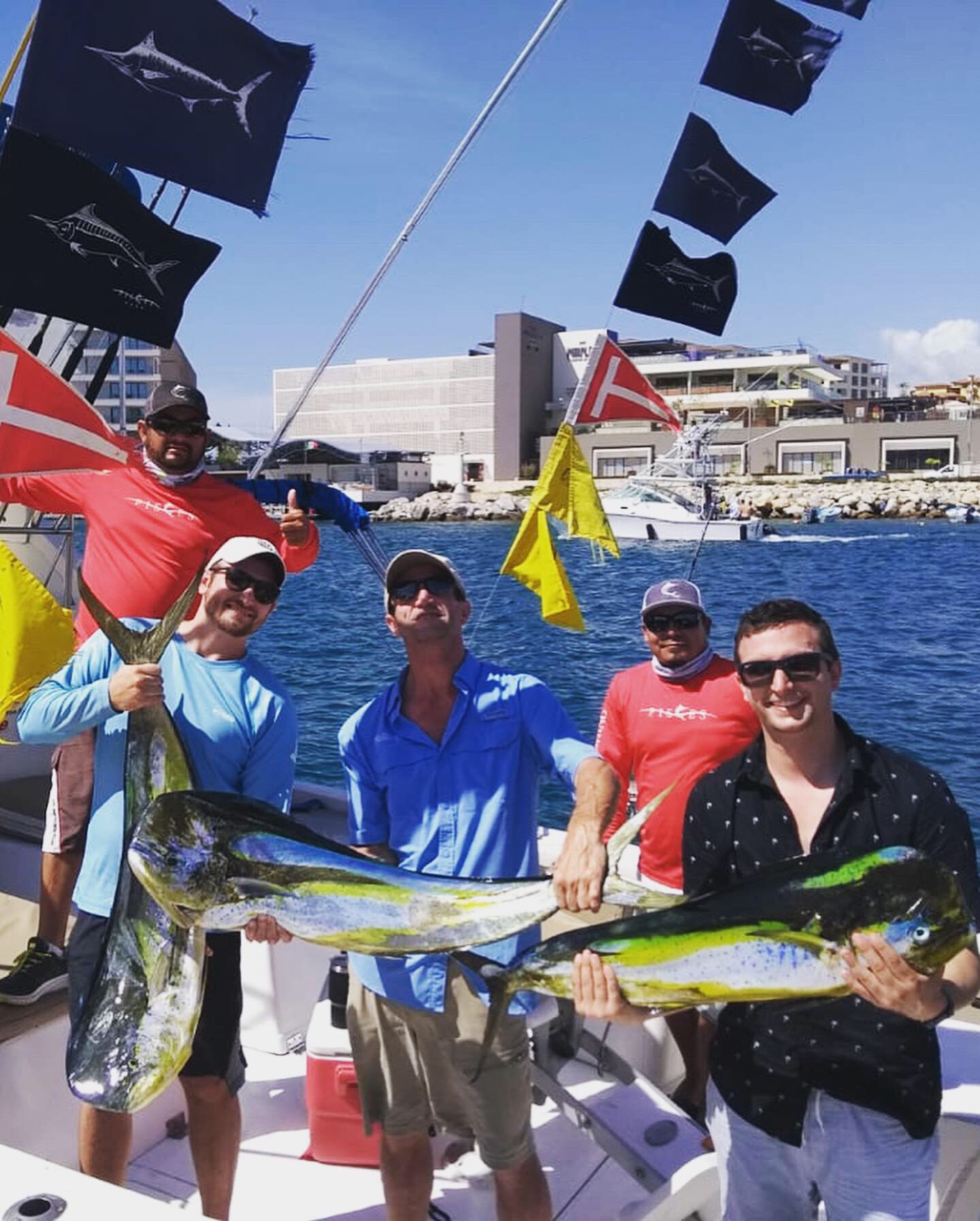 All the 28′ and 31′ Standard boats had excellent fishing with a minimum of 3 striped marlin each and numerous dorados. Boats averaged 5 to 8 Billfish released and upwards of 5 dorado each. Such a nonstop, fun week!

Now for a bit of inshore, Pisces 27′ Panga Tres Amigos headed for a half day that brought 3 Red Snapper and 2 Dorado of about 15 lbs each, all found between the Old Lighthouse and Los Arcos. Hitting on live bait and Guacamayo and Petrolero lures. 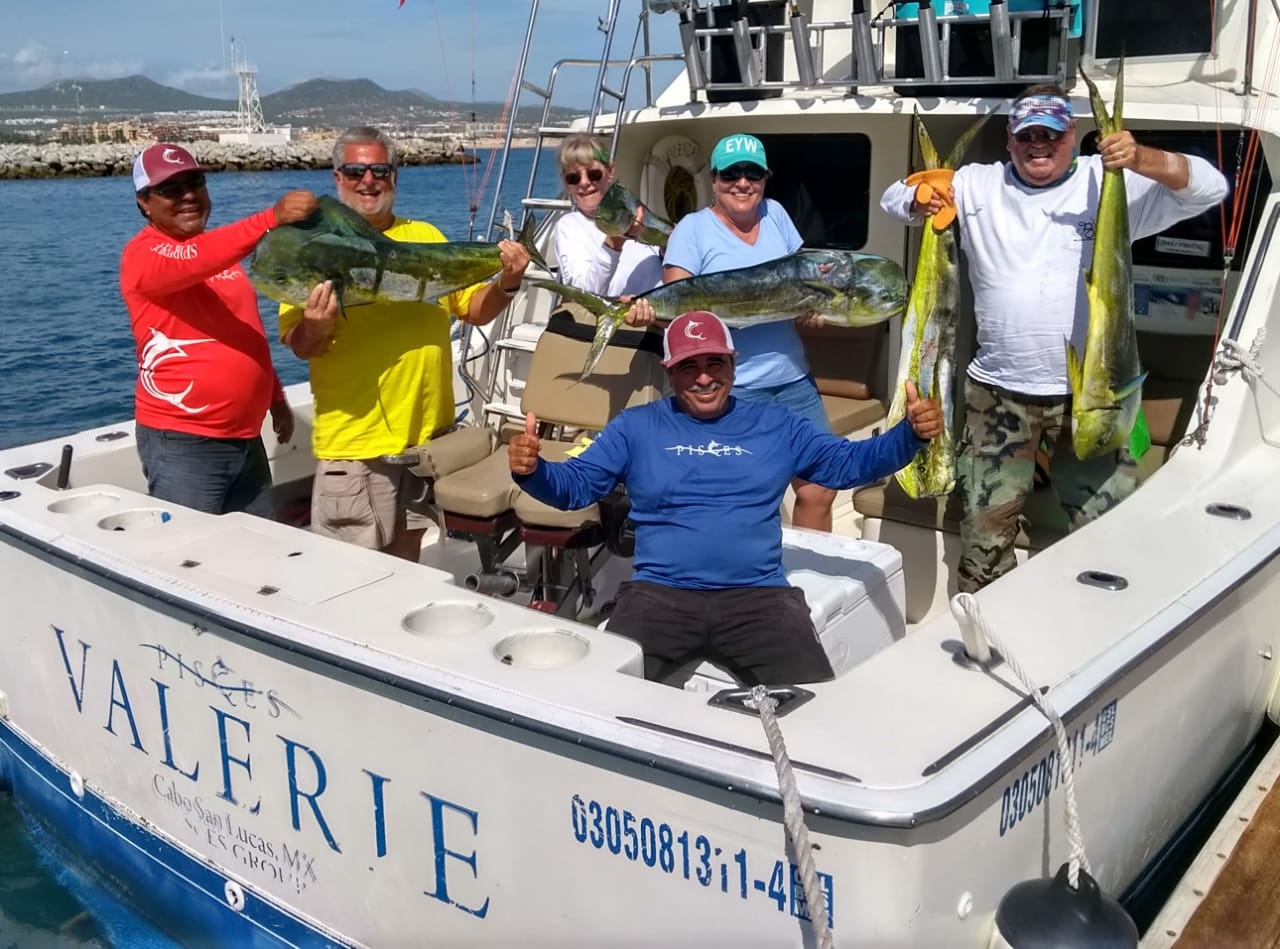 And, still some Roosterfish! Pisces 24′ Panga Anamar released 4 Roosterfish on live bait at Cerros de Arena, which weighed between 10 and 15 lbs each and were released. Angler Lucas Beggs also caught 2 dorados of about 15 lbs. 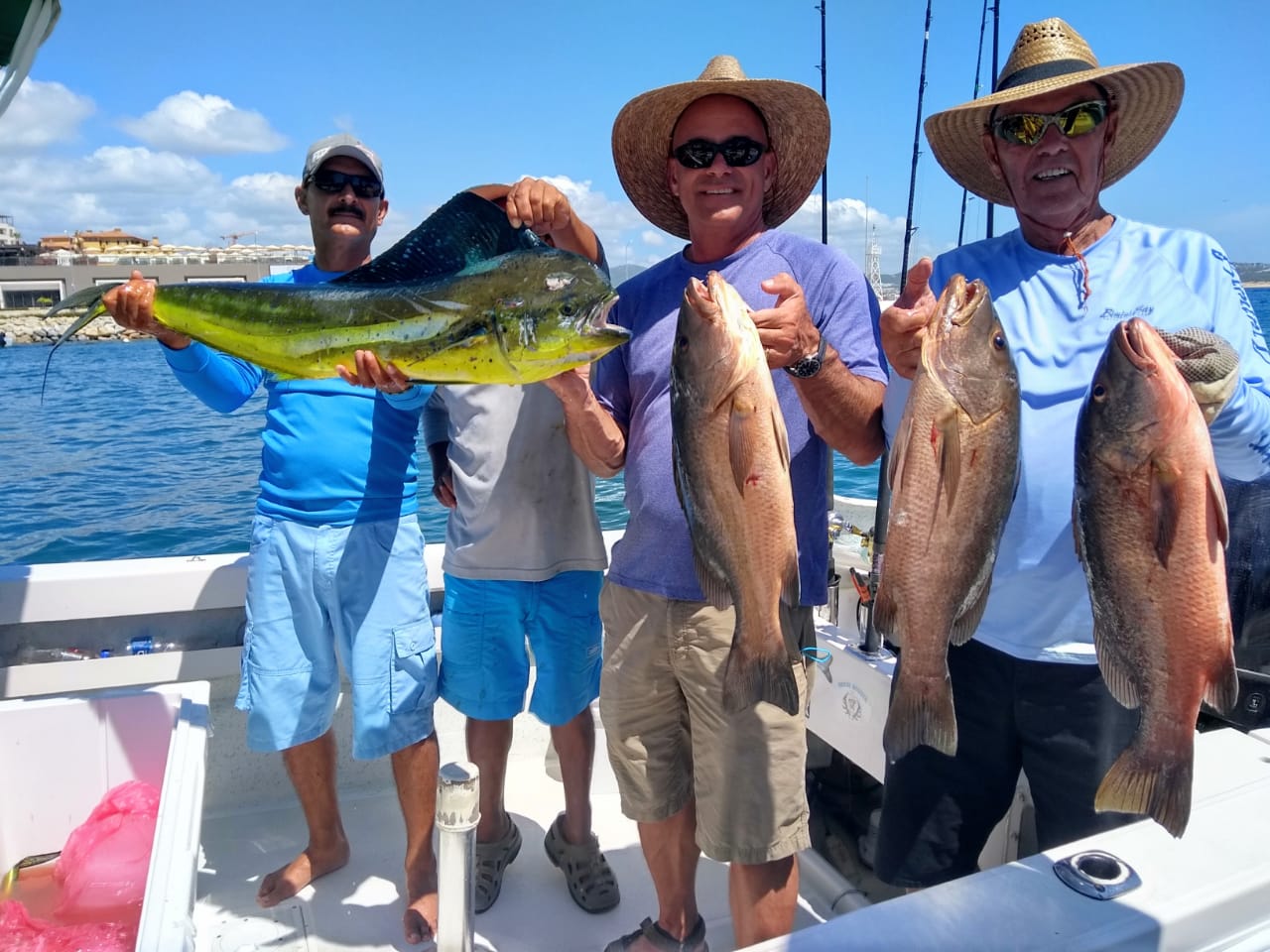 WEATHER CONDITIONS: Some wind picking up of about 10 -15 km/h toward the end of the week, and some intermittent swell. Average wave height 2-3 feet.