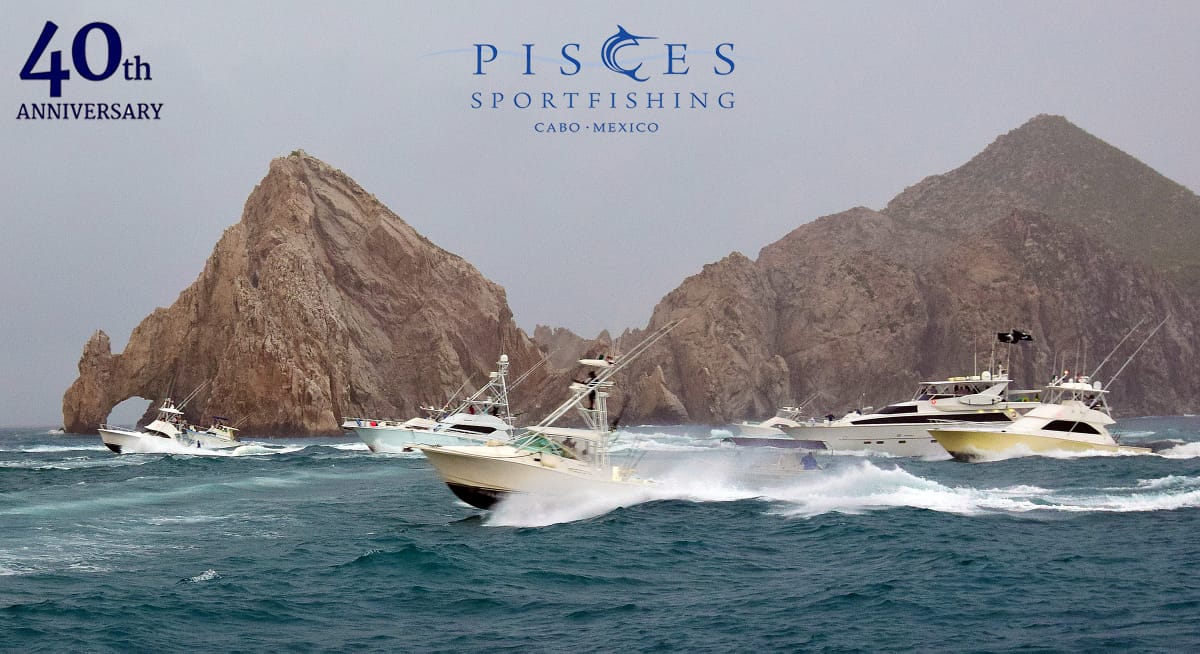 We have a lot to report this week! As some of you may know, Pisces Sportfishing turned FORTY this year and to celebrate we have decided to give back to all of the people who have helped us make it this far. We also saw the fishing pick up again this week with a great striped marlin bite out at the Finger Banks with up to 17 striped marlin caught in released in one day and BIG tunas. We caught three yellowfin over 150 lbs this week! And to top it off, we had plenty of dorado, a nice wahoo and spearfish too. So to celebrate our 40the Anniversary, First of all, we thought of our anglers, and put together an awesome GIVEAWAY. You can still  enter via social media, on Facebook or Instagram. Any of our anglers can share their story with a few pictures or video and be entered in the Giveaway to win roundtrip airfare to Cabo for two, accommodation and of course a day of fishing on our brand new 37′ Viking Billfish Sportfisher, Tag Team III! !

Secondly, we thought of our amazing crews who go out there everyday and do such a wonderful job of providing the service we work hard to upkeep and do it all with a smile, PLUS producing results! Crews who release 98% of the billfish they catch and have the highest success rates in the city (not to mention the state, and probably all of Mexico, but we’ll just leave it at that).. and crews who have been with us since, literally, the beginning! We have grown together, and seen their family grow and join us to (with many of the deckhands and captains added to our fleet over the years being sons or cousins or nephews). What would be a better way to give back to them than to let them all fish on their boats for the day, without clients and do what they love the most? So this is what we did! Our Pisces 40th Anniversary Tournament was this Sunday, September 9th, with our crews competing against one another in four different categories: billfish release, largest dorado, tuna and wahoo (they may not show it but some of them have a big rivalry between them going back 20 years or so!).

It was an exciting day, with a shotgun start in pouring rain – but let me tell you, these boats took off like it was the Bisbees! The conditions were trying, to say the least, but of course they delivered AND had the time of their lives. Here are the results: 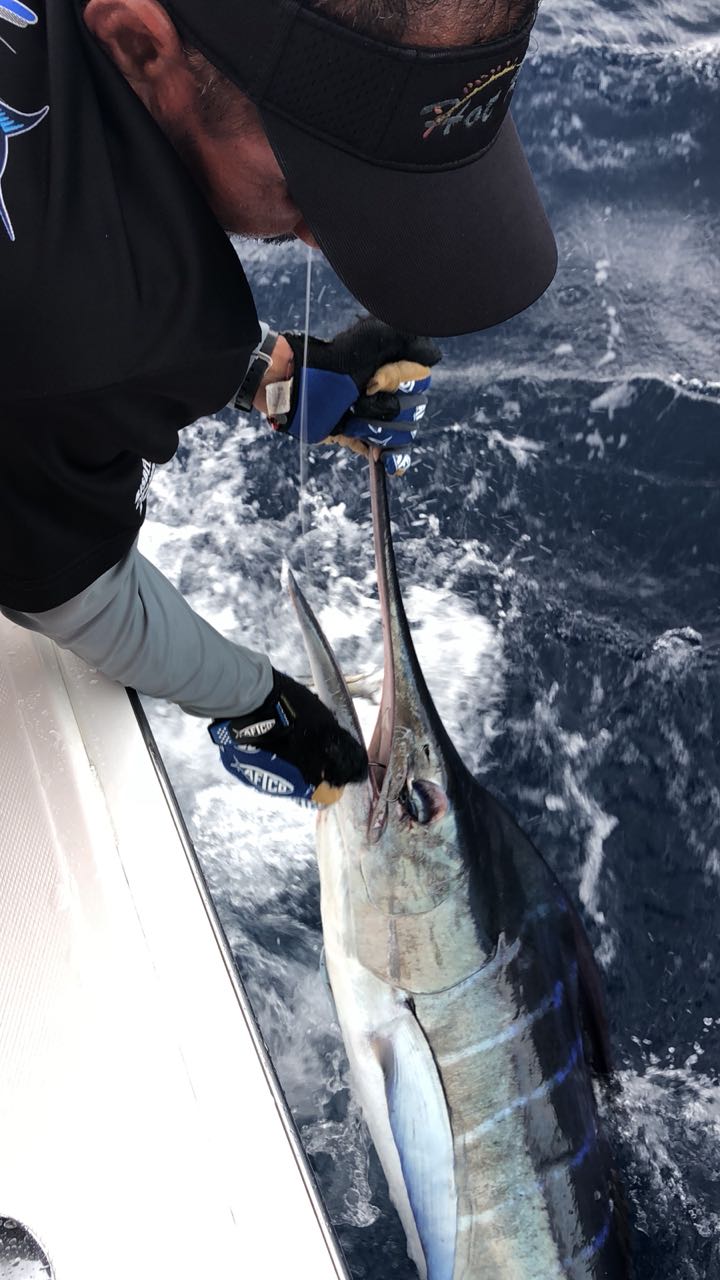 We had two Hard Luck Awards, one for our 31ft Bertram, Tracy Ann, who released 17 striped marlin and would have won but didn’t make it back in time before the scales closed at 4:30 pm. The other hard luck award went to 42 ft Bertram, Yahoo, who made it back at about 4:45 pm, with 6 striped marlin released. 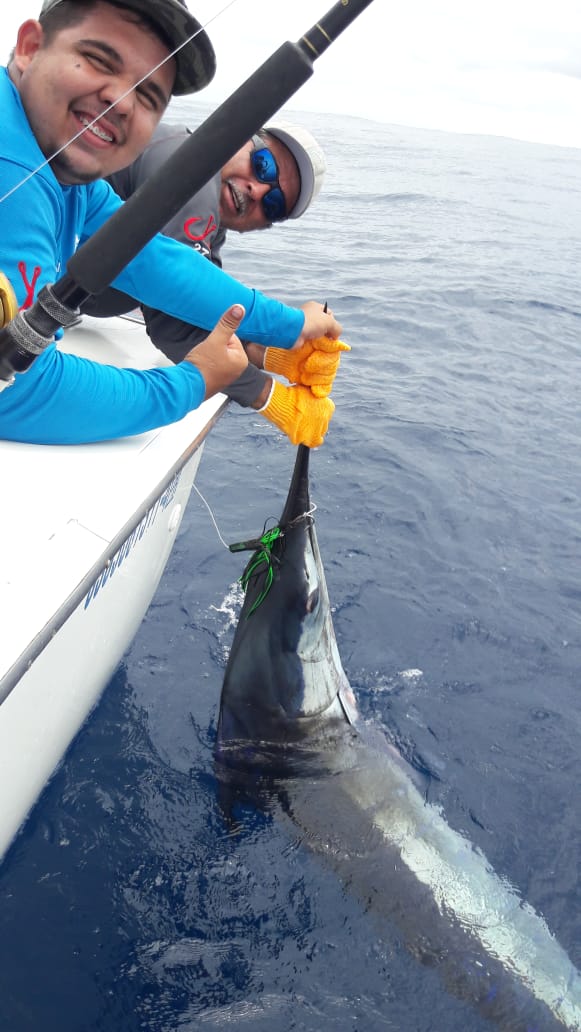 As this is the fish report, I will go into detail about their catches. The boats with the most marlin caught and released, Hot Rod, Tracy Ann and Yahoo, went to great lengths to find them – Finger Banks. The Finger is about 50 miles North West of Cabo and is known to have a strong striped marlin bite between December and January, but, as you can see, this year they here early. Hot Rod and Tracy Ann used ballyhoo for bait, while the Yahoo used caballito. The striped marlin were hungry though, because the crews on the Hot Rod told us that they ran out of bait at about 12 striped marlin caught and released and used a skipjack they caught, which they chunked, for bait and still landed four more! 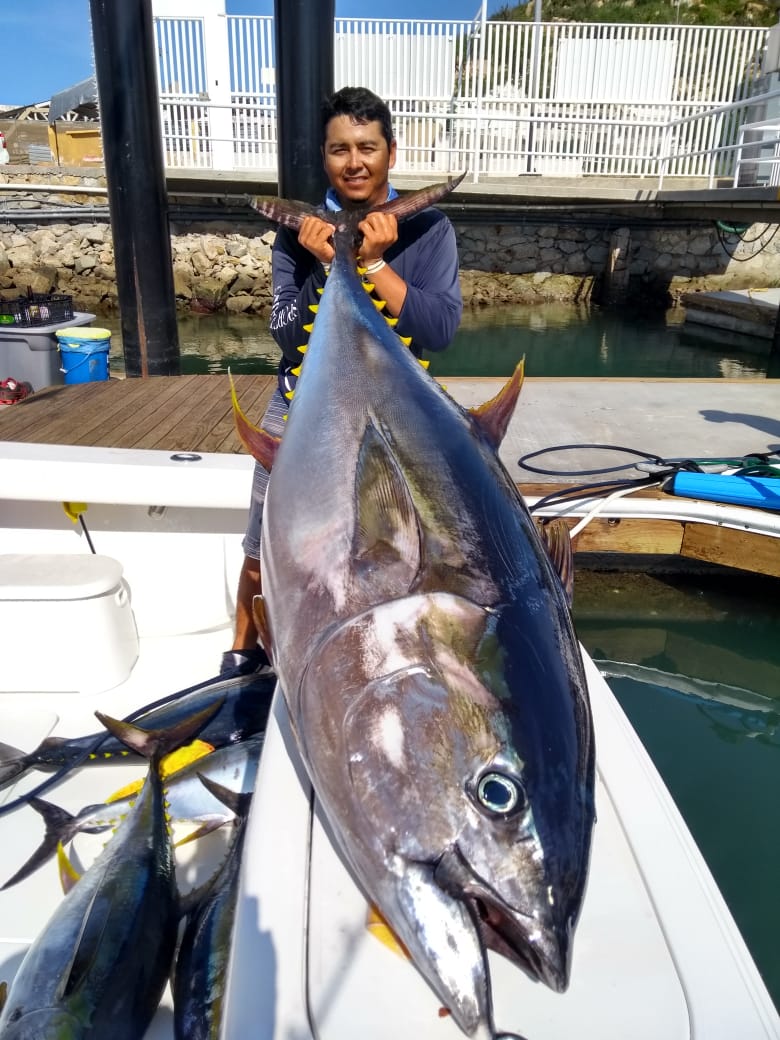 The Tag Team III caught their billfish out at San Jaime using mostly green lures, the striped marlin was about 120 lbs while the sailfish ranged between 80 and 100 lbs. They also closed out this week with an impressive day of tuna fishing. Anglers John Dumars and Bill Grippo put in some muscle and landed 5 yellowfin tunas, with the largest weighing approximately 193 lbs! The others ranged in size of about 15, 40 and 60 lbs each. They landed the tuna with the kite out of the 95 Spot. 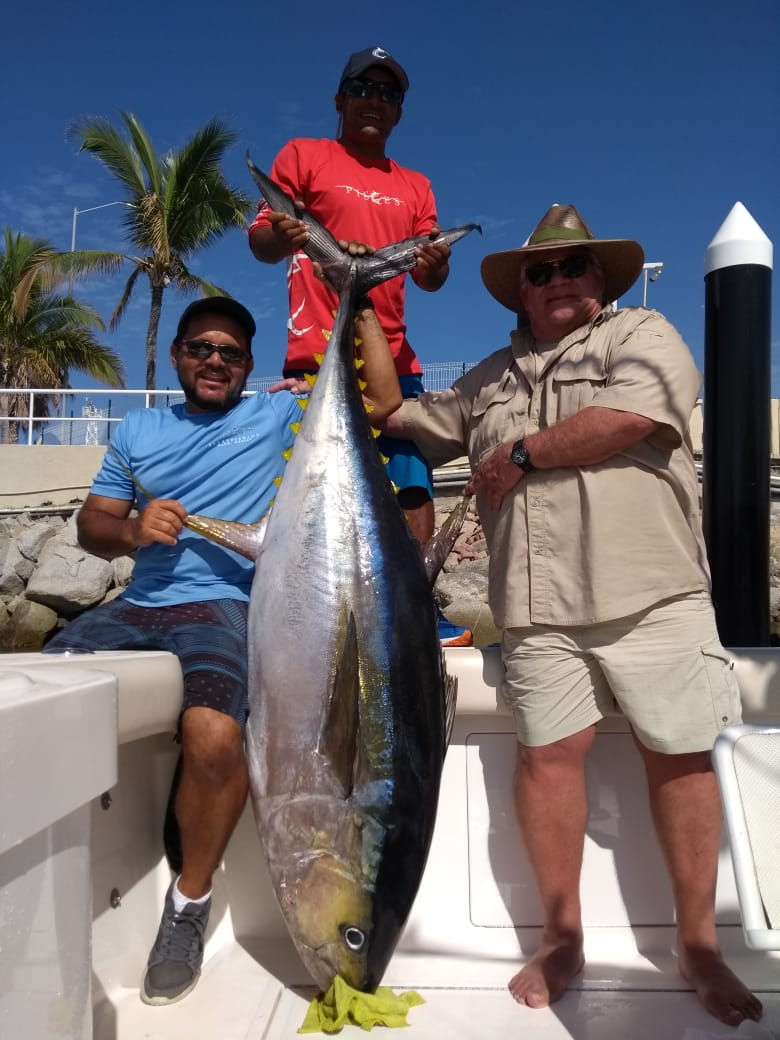 This same day, Sept 14th, the Pisces 35′ Knot Workin and angler William Nusz from Colorado caught 3 yellowfin tuna out of the Old Lighthouse on purple, tigrillo and green lures. The largest weighed approximately 174 lbs. The others were about 70 lbs and 20 lbs.

And even before these two big ones, we knew the big tuna were here as beginning the week  Pisces 32′ Billcollector caught 6 yellowfin tuna, the largest of approximately 165 lbs. The others all ranged between 20 and 40 lbs each. The fish hit on a flying fish lure, as well as green and black lures out from San Jaime. Anglers were Russ and Terilynn Atwell. 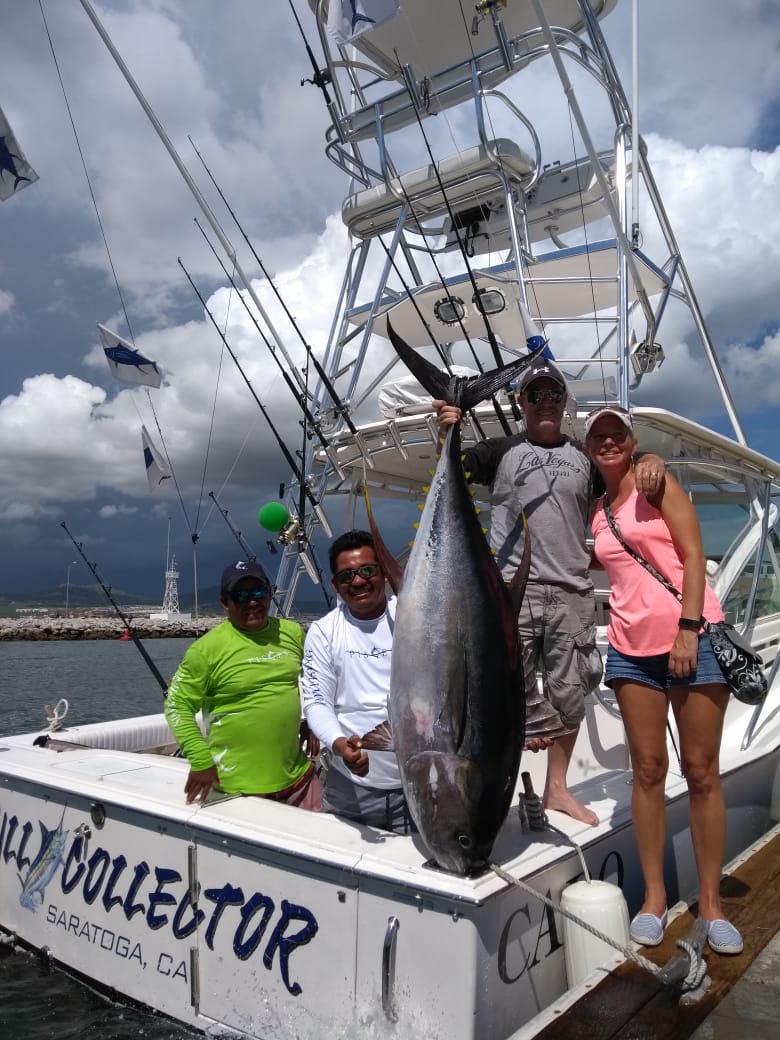 The winning dorado caught by Team Tiburon and crew Captain Rosendo Gomez (with our fleet for 25 years now) and mate Abraham Castro (Son of legendary Captain Julio Castro on the Tracy Ann) was caught at Pozo Cota on Petrolero lure. They also landed 3 more dorado, between 10 and 20 lbs and released a striped marlin which hit on live caballito bait. Captain Rosendo was happy and proud to have had the opportunity to take out his three kids: his son, Jose Antonio Gomez, who caught the winning dorado, and his two daughters. In 25 years of being a fisherman, he had never gone fishing with his family. As they received their trophy, Rosendo’s kids mentioned how nice it was to share in this experience with their dad and finally get to see him doing what he loves most. 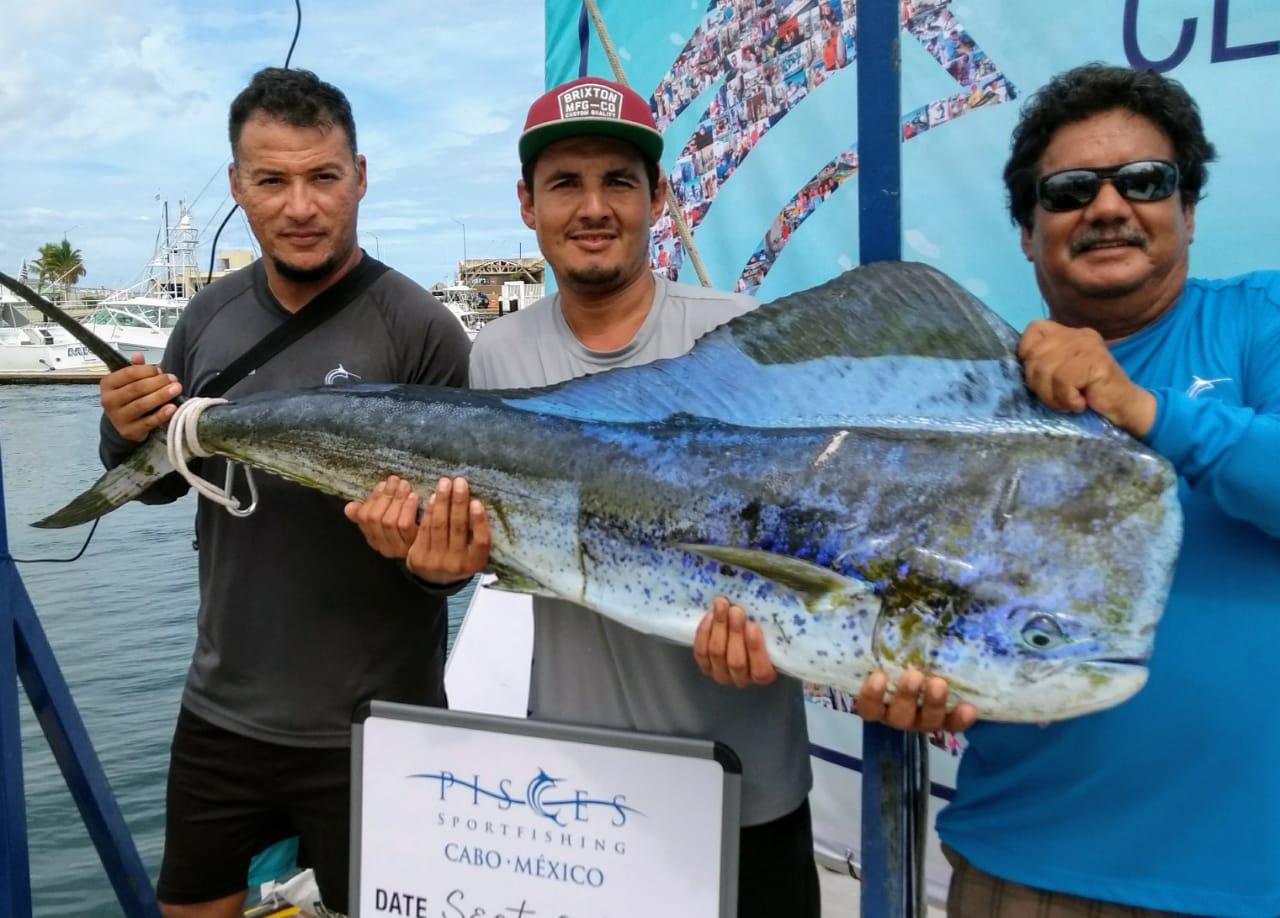 The Ruthless caught 7 dorado additional to their 25 pounder which gave them 2nd place. All of the fish hit on feather lures between Migri?o and Pozo Cota and weighed between 10 and 20 lbs each. Later, On September 11th, The Ruthless and anglers Jeffrey and Angela Stamey from Georgia caught 11 dorado between 10 and 20 lbs each (3 released) out at Migrino on feather and hoochis lures. They also caught and released 1 sailfish of about 110 lbs which hit on Caballito at Migrino. They both had a great week with Pisces, fishing the 10th thru the 13th on 3 different boats. The 10th, they fished on the Pisces 31′ Rebecca, and made their way out to the Finger Banks to try their luck at catching some marlin. They found it, catching and releasing 9 striped marlin of about 120 lbs each, which hit on caballito bait. The 12th and 13th, they found luck with more dorado on Ruthless and some football sized tunas on the La Brisa their last day. Pisces 31′ La Brisa also caught 9 striped marlin at the Finger Banks on the 10th, using caballito bait as well, and anglers Tim and Paul Gilberry also landed some tuna; 9 yellowfin between 12 and 15 lbs each. 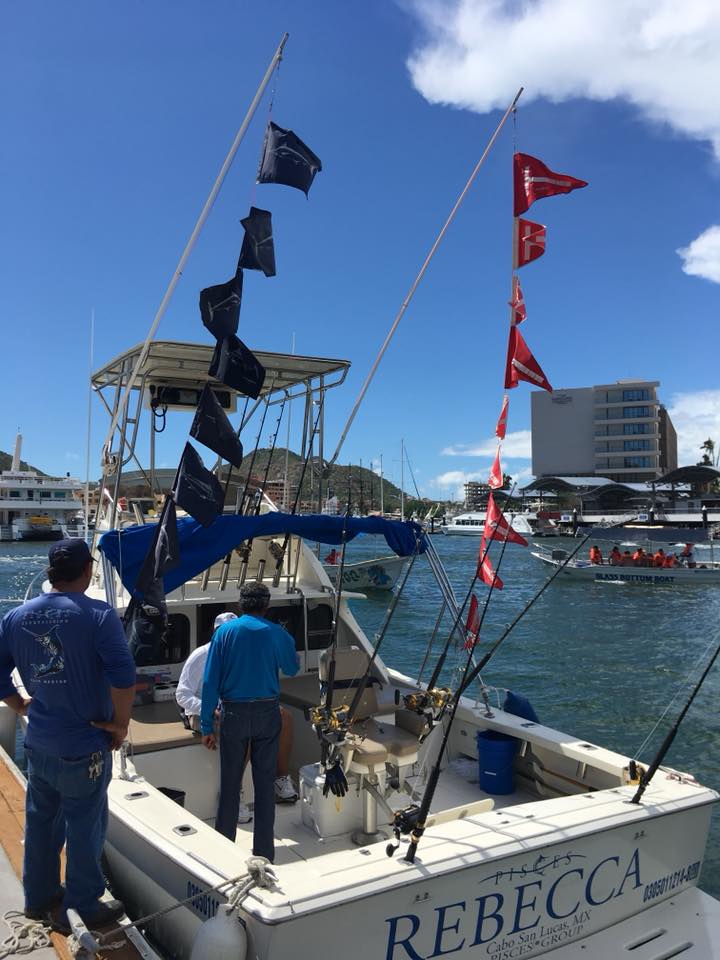 Anglers Jeffrey and Angela Stamey from Georgia had four great days of fishing with Pisces, one of which involved catching and releasing 9 striped marlin (they hooked 12!)

Pisces 42′ Yahoo did great this day too — they caught 10 striped marlin between 100 and 140 lbs each, also at the Finger Bank on caballito bait. Anglers Andrew Chalson, Brett Hawlay and Thomas Ronchetti from Georgia did an awesome job landing these and 4 yellowfin tuna as well.