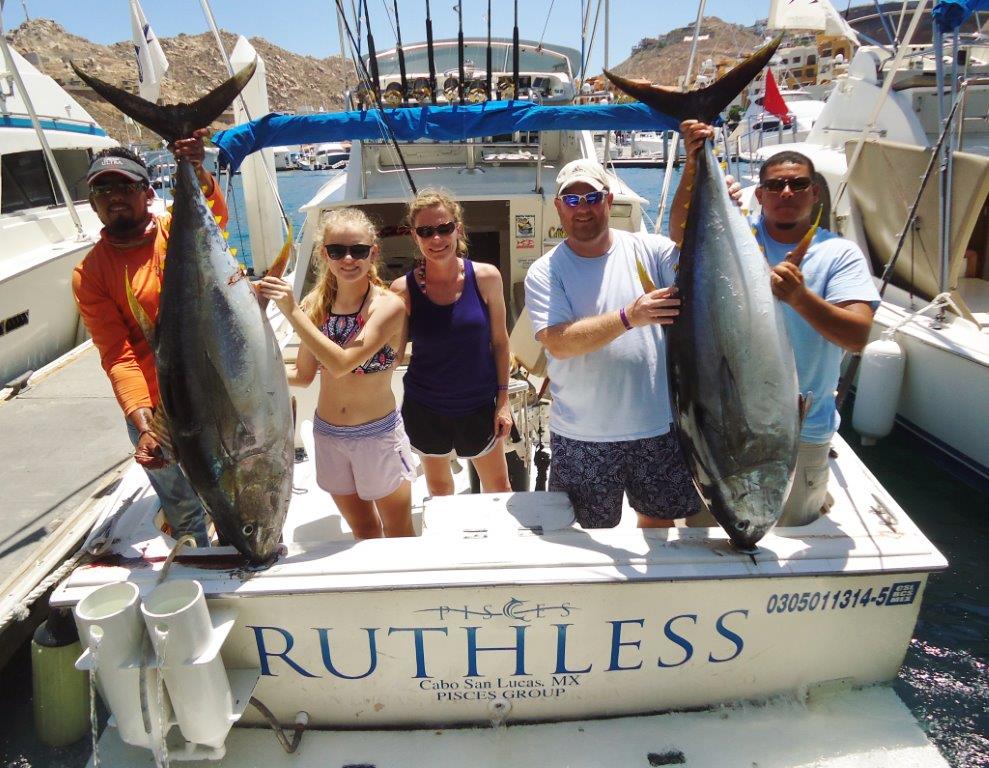 BILLFISH: It’s been a great week here in Cabo. With the La Nina weather event in the Pacific Ocean, the cooler water temperatures have kept storm systems away this year, allowing us to enjoy the world-class fishing without interruptions. The season is definitely underway with blue marlin being caught almost every day (continuing to increase in frequency) while striped marlins are still in the area. Besides this there were admirable catches of large tuna, the best we have seen in years. Pisces Ruthless exploded out of the gate this week, when they released six striped marlin and boated a 187 lb. tuna at the 11.50 spot for a group headed up by Ryan Morales from Texas. Pisces Tiburon did very well for Colorado anglers Christy, Robert, Carida, Nicolas, Carl and Ron on July 10th; they released a blue marlin around 200 lb. as well as a striped marlin, and then boated four tuna – not a bad day! The Speedwell headed further afield on the same day, up to the Destiladeras spot where they were fortunate enough to release two blue marlin estimated at 220 lb. and 280 lb. Valerie had an outstanding day for Blane and Cathy Jones with a blue marlin release, and eight tuna, the largest being just shy of 200 LBS Both fish took lures and were fought by Walter Scott and Tim Hines from Texas.  The Yahoo enjoyed an active day for the Bollen and Kulowitzki families, who had an exciting day releasing three striped marlin and a silky shark.  Raul Perez from Tomball, Texas, Ruthless had an active day at the Sea Mount where he released three striped marlin up to 140 LBS.  Equaling this catch, the same day, July 10th, was Tracy Ann, which released three stripers just five miles off of the Old Lighthouse for Gary Speer and friends. Pisces anglers caught a total of 58 billfish this week, consisting of 49 striped marlin, 8 blue marlin and 1 sailfish; 46 fish were released.

OTHER SPECIES: Big tuna catches were off the charts this week and starting out the week was Mark Chiavetta again, aboard Bill Collector with a very nice 160 LB tuna that he caught eighteen miles from the 210 spot. Followed by a 119 lb. fish caught by Texan, Jeremy Riley, aboard 28 ft. Andrea. This same day Ruthless got the Tokarchicks from Oklahoma hooked up to two big fish that ended up weighing 150 lb. and 160 lb., kudos to 14-year-old Madison who brought in one of this fish with no assistance. Bill Collector scored again this time with the Runyan family on board. They totaled six tuna with the largest being 140 lb. The Jones group fished 35 mile out aboard Valerie and landed a 193 LB tuna as well as billfish. The biggest tuna of the week however showed up at the close of this report, with a 200 LB fish that took four hours to boat on 40 LB test line by the Goodhue family from Texas. This wasn’t the biggest fish though, Hot Rod pulled in with a 213 LB tuna, one of five they caught for Anthony Noble and party also from, yes, you guessed it..Texas; they also released a silky shark. The largest tuna for us however, was a beautiful 240 lb. fish aboard Pisces Knot Workin for the Drazic family from Georgia; they also caught a 120 lb. tuna along with four other smaller fish. Why isn’t it the tuna tournament already..we would have swept all the awards! Thirty six percent of our boats caught tuna with catches ranging from one to twelve fish, giving us a total tuna count of 101 fish.  Dorado catches were extremely slow with just a few fish caught up to 35 LBS. We caught nine silky sharks as well as a mako, which were all released. It was nice to see some wahoo up to 50 LBS. Inshore not a lot of action with panga fishing and half day trips slow. A few jack crevalle, skipjacks and amberjack were the only inshore activity.

LOCATION: Both Cortez and Pacific sides, offshore for big tuna, off of San Jose for bigger blue marlin, striped marlin in diverse locations.

WEATHER CONDITIONS: Clear, sunny skies, seas mostly calm with the exception of a ground swell towards the end of the week.

BASED ON THE CATCHES OF PISCES