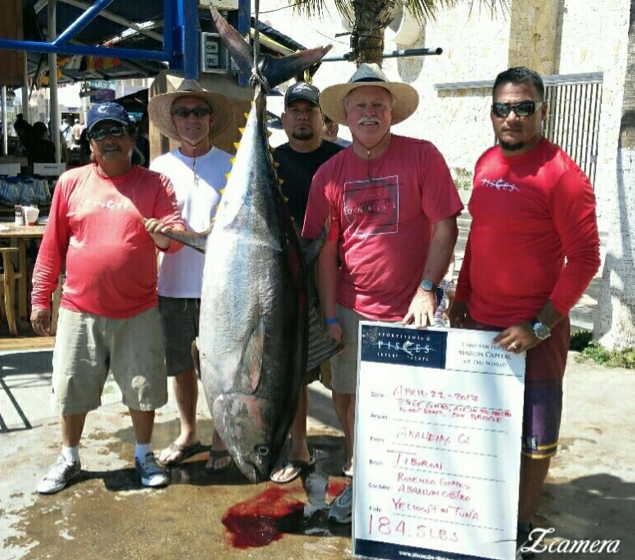 These anglers from Anaheim show off a beautiful 184.4lbs yellowfin landed aboard the Pisces Tiburon.

This week saw a complete turnaround and went offshore, we’ve been talking about the great inshore fishing that we’ve been having for about the last month or so. Now it seems that the striped marlin bite is starting to come back. Boats were mostly offshore between San Jose and Cabo San Lucas at the 11:50 Spot and the Cabrillo seamount, chasing after striped marlin. We had an amazing day on the 22nd with 42 striped marlin released (100% of all marlin caught), most boats landed multiple marlin catches on caballito live bait, from anywhere between 3-5 striped marlin being landed per boat. Our top marlin boats this week are without a doubt the Pisces Tracy Ann captained by Julio Castro came in top spot landing multiple marlins almost everyday this week; coming in a close second was the Pisces La Brisa captained by Bruce Monta?o who nearly puled off the same feat.  However, these incredible fishing levels did not sustain themselves and slowly tapered off during the week. 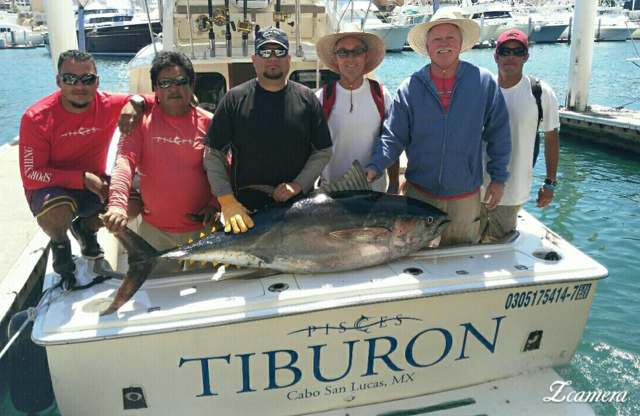 Just to give an example of how good the fishing was, just on the 22nd we had the Pisces Ruthless and the La Brisa both caught and released six striped marlin, the Tracy Ann and the Andrea released five, while the Valerie and the CRod released four striped marlin. We saw another unusual if welcome catch, it seems as thought the big pelagic fish must have had the right conditions to move into the area. The Pisces Tiburon captained by Rosendo Gomez managed to land a massive 184.5lbs yellowfin tuna on a white/blue lure out for a group of anglers from Anaheim, California, as well as catching and releasing a striped marlin near 80lbs also at Cabrillo seamount. As far as other species go, we saw the odd wahoo landed as well as yellowtail, jack crevalle, sierra mackerel, roosterfish, red snapper and skipjack. 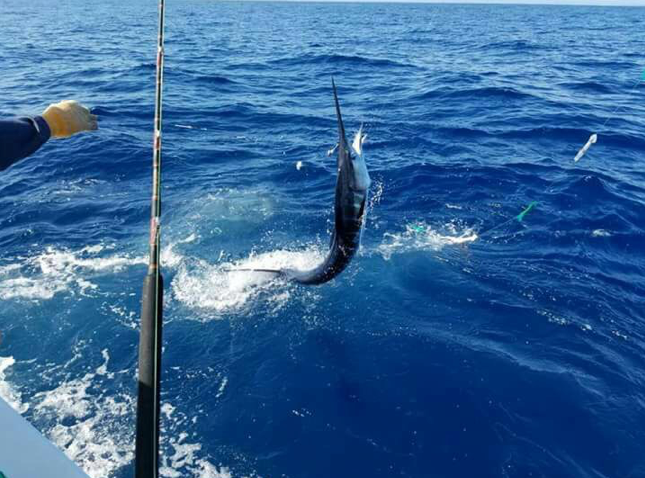 Striped marlin jumps, as it gets near the boat, ready for release.

LOCATION: 11:50 Spot and the Cabrillo seamount.

WEATHER CONDITIONS: Mostly clear skies and calm seas, with some moderate swells towards the end of the week. Air temperatures ranged from the 60’s at night to the 80’s in the day.

Based on the catches of Pisces Sportfishing Fleet by Glenn Ehrenberg, photos by Oscar Ba?agas.