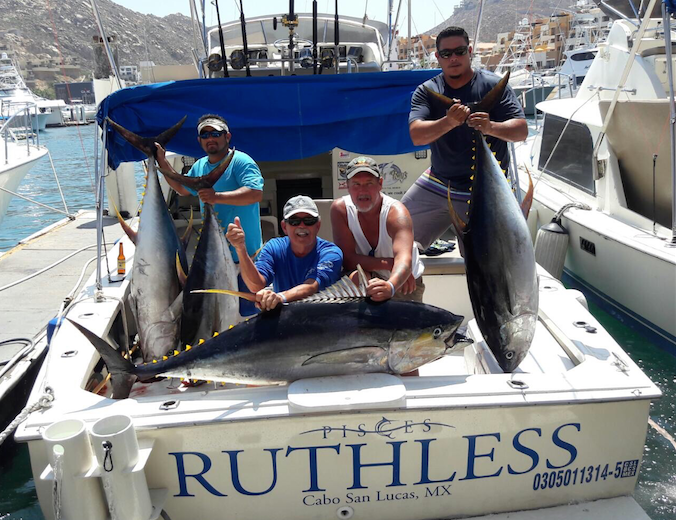 Dennis from McKeesport, Pennsylvania and his four 100 pound plus tunas.

We had an amazing week of summer fishing with 96% of boats landing fish. Most of the action was seen with consistent yellowfin tuna and dorado catches, as well as seeing some wahoo and various species of billfish. Most of the fishing remained on the Pacific side throughout the first half of the week, then switching towards Punta Gorda and the 11:50 Spot at the end of the week. When boats did fish inshore, they ended up bringing in some nice roosterfish, and even some grouper up to 30 pounds. On the 24th we saw the Pisces Valerie had an amazing day for the Gopffarth’s from Arizona as they boated a 210 pound monster yellowfin after a 2:45 hour fight, landed on a “panga wanga dorado pusher” lure. They were also lucky enough to release a 120 pound striped marlin. 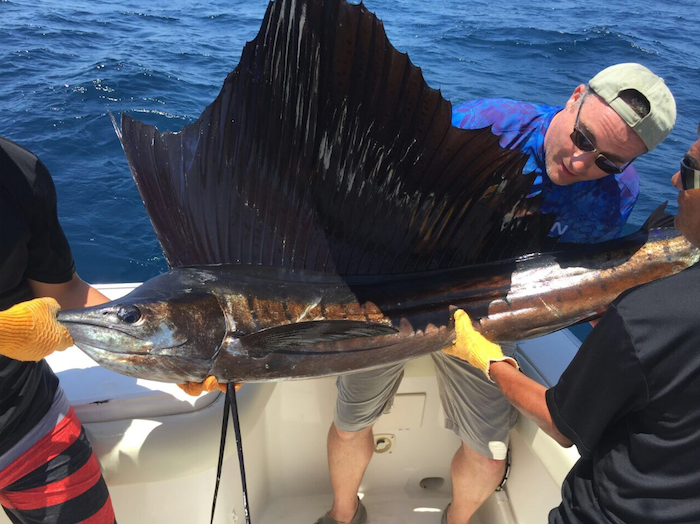 Sailfish released aboard the Pisces Speedwell.

The 26th was probably the best day of fishing that we’ve seen in a while. The Pisces Ruthless landed an incredible four yellowfin tuna in the 100 pound class, they ranged from 110 to 185 pounds. These fish were landed by lone angler Dennis from McKeesport, Pennsylvania about 35 miles out at Punta Gorda on green, yellow and petrolero lures. Continuing the incredible fishing on that day, the only other boat out at Punta Gorda had a billfish grand slam for the Bruncati’s of Lousiana. They released a striped marlin of 130 pounds, a sailfish near 90 pounds, a blue marlin of 260 pounds and a black marlin of 240 pounds. All fish were landed with caballito live bait, except for the sailfish which took a bulito live bait.

WEATHER CONDITIONS: Clear skies and calm seas most of the week, and air temperatures were in the mid-80’s.