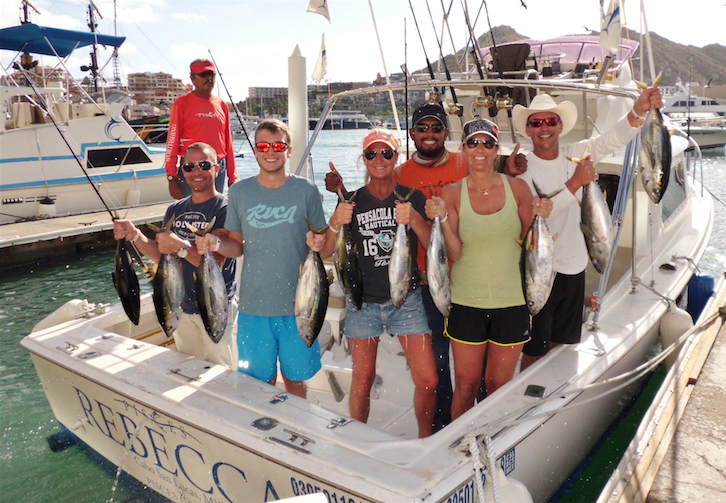 Pisces Rebecca with anglers from Lincoln, Nebraska and their yellowfin tuna. Photo by Oscar Ba?agas.

Fishing this week was a little bit less successful than last, with 79% of boats catching fish versus the almost perfect 98% catch success rate the last two weeks. Striped marlin was the main staple this week, although most plentiful of all was the other species category. The types of fish caught were also more varied, with greater inshore and smaller game fish being caught, too many different species to name them all in this report. Some of those species were red snapper, sheep’s head, grouper, sea bass, ladyfish and sierra mackerel. Again for those willing to spend the extra money on fuel, there was great success to be had at the Finger Banks. On the 21st the Pisces Bill Collector had our best marlin numbers, releasing 10 striped marlin from 90-140lbs for a group of anglers from California.

There were a lot of small yellowfin tuna caught this week, with some boats reaching very impressive numbers. The Pisces Andrea caught around 40 yellowfin tuna from the 3-10lbs range, with the majority of these being released, about 31 miles out at the 240 Spot on the 22nd for some anglers from New Mexico. On the same day the Pisces Rebecca caught about 32 yellowfin tuna in the 10-15lbs range (some releases) about 32 miles out from the Lighthouse for a group from Atlanta, Georgia. One of the pangas Pisces uses the Tres Amigos, had a really nice day fishing inshore with a group of anglers from Cypress, Texas. They went to Migri?o and landed 16 sierra mackerel ranging from 5-8lbs, all caught on cuchi lures. The Pisces Adriana went out to the Golden Gate and landed six nice sea bass, they ranged from 10-20lbs and were landed on mackerel live bait.

WEATHER CONDITIONS: Clear and partly cloudy skies, calm to moderate seas. Air temperatures were in the mid 70’s all week.