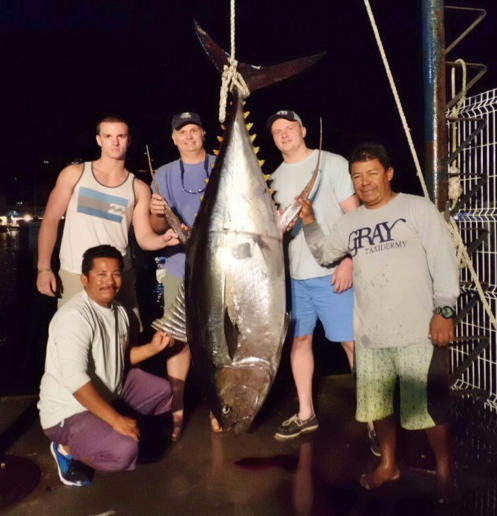 Christmas and New Year’s week (minus Christmas day which everyone had off) brought us in a mixed bag when it comes to fishing, while there were a number of boats skunked this week. We also saw others with great catches, and a varied number of smaller species also made an appearance. This week we had roosterfish, skipjack, yellowtail, sierra mackerel, red snapper and wahoo, all brought on board Pisces boats. The main news this week was the comeback of the large yellowfin tuna to Cabo, or more specifically the ever-productive Finger Bank. We saw three boats bring in tuna in the 300lbs range one day, with the Pisces Bill Collector bringing in a fish estimated at a little over 300 pounds on the 27th. The Crespi’s from Cary, North Carolina reeled this guy in on mackerel live bait out at the Finger Bank. That same day, the Pisces C Rod managed a 130lbs yellowfin tuna caught on a purple lure, as well as catching and releasing a striped marlin all of this just outside of San Jaime Bank for the Olson’s from California.

Top marlin catch this week went to the Pisces Tag Team with captain Nayo putting his clients from Roseville, California on eight striped marlin ranging from 100-170lbs. They were all caught on mackerel live bait out at the Finger Banks. The Pisces Rebecca came in second, with five striped marlin released (near 120-130lbs and they also managed four nice dorado of between 15-20lbs. All these fish were landed on the edge of the Golden Gate for some anglers from Janesville, Wisconsin. As far as other species, the Pisces Hot Rod had a very nice 50lbs wahoo, caught on a tigrillo lure off of Pozo de Cota for some anglers from New York, New York. While the Pisces Adriana landed nine groupers in the 15-20lbs range as well as catching and releasing a striped marlin for some anglers from San Francisco, California.