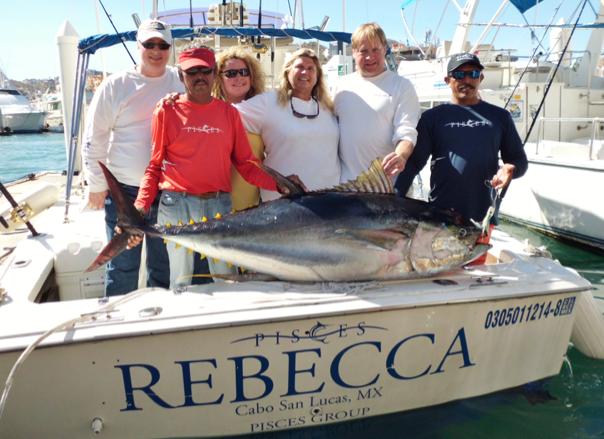 Pisces Rebecca with anglers from Conneticut and their 213.5lbs yellowfin tuna, photo by Oscar Ba?agas.

The New Year started this week, and fishing was hit or miss depending on the day (crews had January 1st off), but even with that we saw 84% of all trips land fish. Although last week we saw many large tuna landed throughout Cabo, this week most of the yellowfins were in the football tuna range. The Finger Bank remains productive for those willing to spend the extra money on fuel. Top boat of the week was definitely the Pisces Valerie, captain Roberto Sandez who put the Dow’s from Greenbrae, California on seven striped marlin on both the 4th and 5th of January. Heading out to the Finger Bank they caught and released all fish on mackerel live bait, they estimated them at around 100-150lbs. On January 3rd the same boat and crew caught and released five striped marlin in the exact same area. 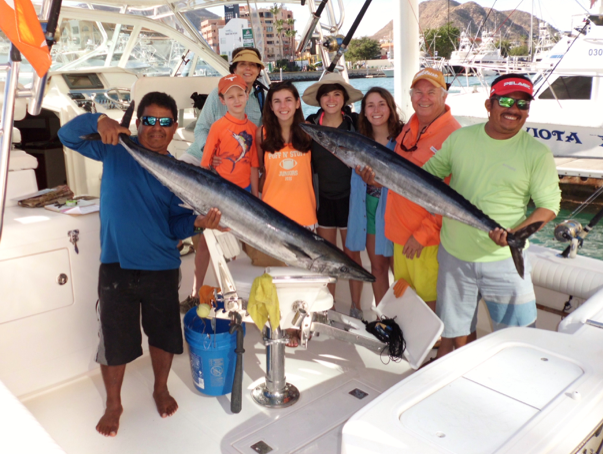 Pisces Bill Collector and two wahoo’s of 30-40lbs caught for the Holmes from Midland, Texas. Photo by Oscar Ba?agas.

As far as other species go we saw boats this week landing smaller tuna, some dorado and wahoo. We saw the following smaller game fish caught throughout the week: grouper, jack crevalle, sierra Spanish mackerel, sea bass, skipjack, roosterfish, amberjack and ladyfish. Top wahoo numbers went to the Pisces Bill Collector, landing three wahoo of 10-30-40lbs respectively, as well as two football size yellowfin tunas and eight skipjack all out about 30 miles from the 200 Spot for a group of anglers from Midland, Texas. Bucking the small yellowfin trend we saw the Pisces Rebecca, captained by JR Alucano land a 213.5lbs yellowfin tuna for some anglers from Conneticut, as well as two smaller 15lbs fish. They were all landed out at the Golden Gate on kite lures.

WEATHER CONDITIONS: Clear skies and calm seas most of the week, with daily high air temperatures in the mid-70s.