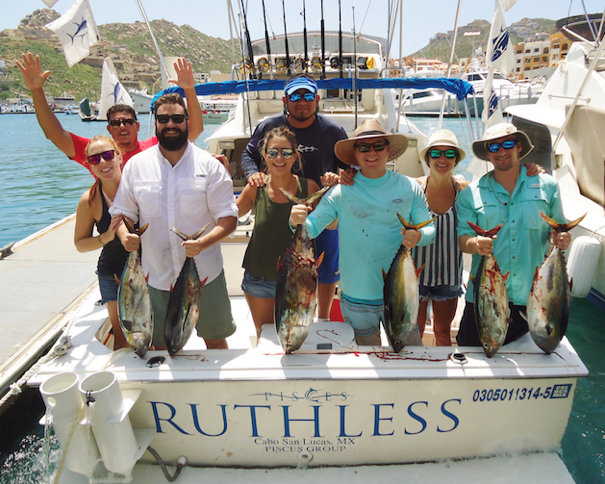 These anglers show off their catch aboard the Pisces Ruthless (Photo by Oscar Ba?aga).

This week saw a nearly perfect catch success rate for all Pisces boats; this was definitely the week of yellowfin tuna catches. With 91% of boats that went out fishing the Pacific side and catching large numbers of football-sized tunas, sometimes Pisces boats were catching tuna into the triple digits (although with most being so small, the majority were released). Dorado and billfish species were almost a blip on the radar with very few of these being landed, it seems like the Finger Bank may be slowing down after weeks of crazy productivity. Smaller game and inshore fish remained the main attraction after tuna, with anglers seeing action from skipjack, grouper, ladyfish, yellowtail, roosterfish and sierra mackerel.

Top tuna boat of the week was the Pisces Ruthless, captained by Roberto Padilla. They were out on the Pacific with some anglers from Newcastle, California when they caught (and released most) of the 61 yellowfin tuna they landed, they were all near 10 pounds and were landed on cedar plugs. The Pisces Tracy Ann had a very nice day out by the Golden Gate, landing (and releasing some) 50 yellowfin tuna in the 10-20 pound range, three groupers and a yellowtail; all for some anglers from Ione, California. While our top marlin boat was also the Tracy Ann on the 31st they caught two striped marlin near 130-140lbs as well as 35 yellowfin tuna in the 10-20 pound range (some released) for some anglers from Argyle, Minnesota.