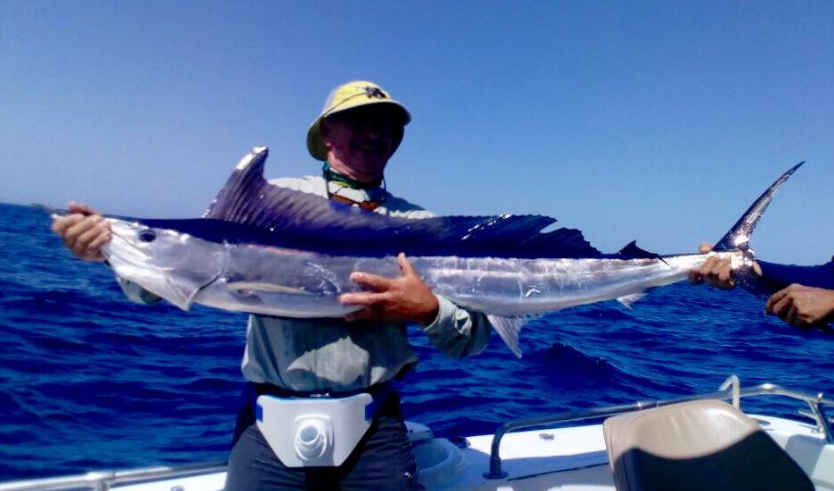 Steve Bailey from the Channel Islands, UK; holds up a Pacific shortbill spearfish abord the Pisces Adriana before release.

July is off with a bang for Pisces Sportfishing, as the summer weather and warming seas have seen the fishing come alive with many species, with a few of them being rarely caught in Cabo. Fishing was in a few different locations this week, from the 95 Spot to San Jaime and the 180 Spot. While inshore fishing produced jack crevalle, roosterfish, white skipjack, ladyfish, triggerfish, sea bass, grouper, and a silky shark that was released. This week we saw our boats land a large number of billfish, with large numbers of striped marlin, blue marlin and two rarities for Cabo, a Pacific shortbill spearfish and a swordfish. We can’t really pick a top boat for this week, as it was that outstanding, below you’ll find a rundown of some of the most impressive catches this week:

-The 31ft Pisces La Brisa, captained by Bruce Monta?o along with deckhand Fernando had an extremely productive day out at the 95 Spot on the 5th. They released a blue marlin of around 220 pounds, as well as two striped marlin between 100-120 pounds. All billfish were landed on caballito live bait, while the three yellowfin tuna and three skipjack caught, were landed on cedar plugs. All this action was seen by a pair of anglers from Hitchcock, Texas; they went home with sore arms and big smiles to say the least!

-Steve Bailey and Bob Pallot of the St Brelade, in the Channel Islands of the United Kingdom were fishing aboard the 28ft Pisces Adriana on the 4th of July. Captained by Nicolas Winkler, with the help of his deckhand Pablo managed to put their anglers on to an extremely rare fish for Cabo. They released a 50 pound Pacific shortbill spearfish, and although this fish isn’t rare in the Central Pacific we don’t see them very often here. They where fishing about 30 miles south of Cabo San Lucas, with the fish taking a feather lure.

-The 48ft Pisces Listo captained by Lupe Gomez, saw the largest blue marlin of the week on the 3rd. He was fishing with the Parker family of Texas, when they released a blue marlin estimated at 300 pounds on caballito live bait. They also had four yellowfin tuna in the 10-20 pound range, all fishing was done out at the San Jaime bank.

-The 31ft Pisces Ruthless captained by Roberto Padilla was fishing out at the 220 Spot, about 35 miles offshore when they picked up a small five pound yellowfin tuna. A short while later they landed another tuna, this time however it was 156 pounds and gave them a 45-minute battle. All this for a group of anglers from Kansas, the larger tuna was landed on a petrolero feather lure, and the smaller one on a cedar plug. 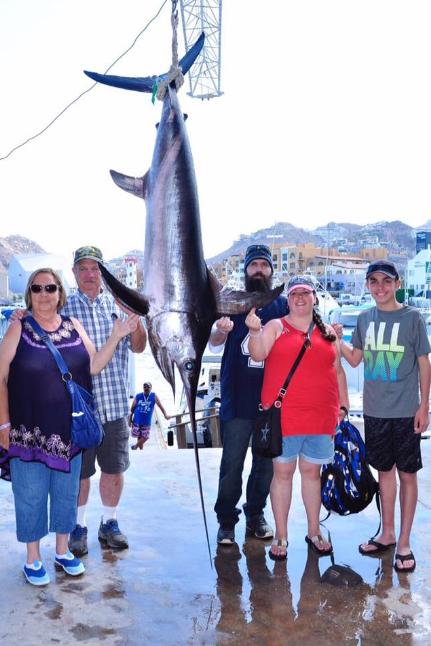 -The 31ft Pisces Tracy Ann captained by Bruce Monta?o, alongside deckhand Martin went fishing far offshore with the Hansen family and Gary Barnes from Idaho. While fishing with feather lures and cedar plugs, they managed to land seventeen yellowfin tuna in the 10-20 pound range. They also engaged in a two-hour battle with a 148 pound swordfish, landed with caballito live bait. It was the first one landed so far this year for Pisces Sportfishing. The lucky group from Idaho Falls didn’t go unrecognized by dockmaster Oscar Ba?aga, who realized that one of the anglers George Hansen, had caught a 566 pound blue marlin on the Pisces Rebecca in October of 2013.

-Both the Pisces Adriana and the Pisces Bill Collector landed blue marlin on the 6th. The Adriana’s estimated at around 250 pounds, and the Bill Collector’s at around 200. They took a caballito live bait, and the other a pink lure. The Pisces Tiburon was fishing with a group of anglers from Queensland, Australia when they tucked into a 70 pound yellowfin tuna. As well s a nice 25 pound dorado, both landed at the 95 Spot.

WEATHER CONDITIONS: Clear skies and calm seas most of the week, with air temps in the high 70s to mid 80s.