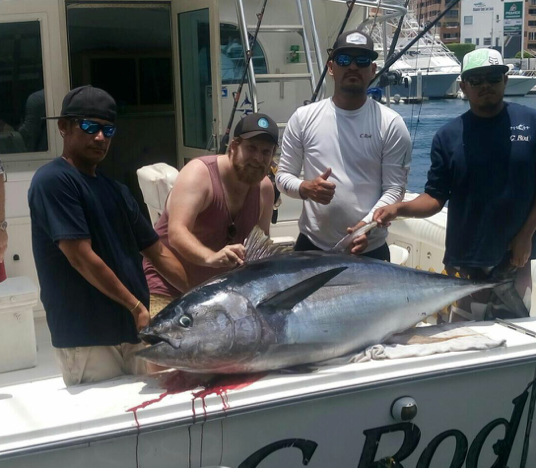 Largest tuna of the week landed aboard the Pisces C Rod, this fish was estimated at around 170 pounds (Photo by Abraham Herrera).

This week was nothing short of a billfish bonanza in Cabo. We saw a huge variety of species released aboard Pisces boats, with a good number of them catching and releasing multiple billfish per trip. We saw boats land mostly striped marlin, followed by blue marlin and sailfish. We also saw the our largest spearfish so far, strangely enough in our nearly 40 year history Pisces boats have never seen this many spearfish in a single year, let alone in one month. We also saw the return of some triple-digit yellowfin tuna, with two large fish landed this week. As far as other species, we saw some a good number of wahoo landed as well as some larger roosterfish for the inshore action. Below you can find a selection of our top catches this week: 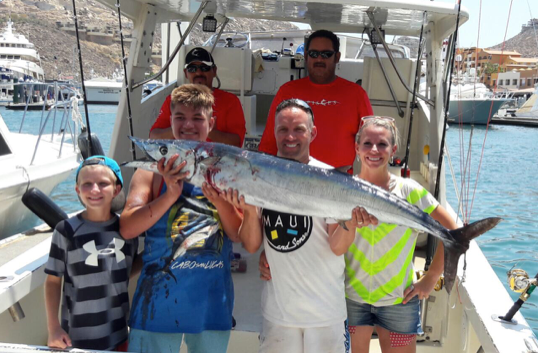 The Jeppson’s from California show off this nice 35 pound wahoo caught aboard the Pisces Andrea. They also released a striped marlin of around 130 pounds (Photo by Oscar Ba?aga).

-The 38ft Pisces C Rod captained by Martin Aguilar had a group of anglers from California out at the 95 Spot on the 26th, they were fishing with a pertolero lure when a large tuna struck it and gave them a two-hour fight. Although the fish wasn’t weighed, it was estimated by our dockmaster Oscar at around 170 pounds. Which would make it the largest tuna any of our boats saw this week. 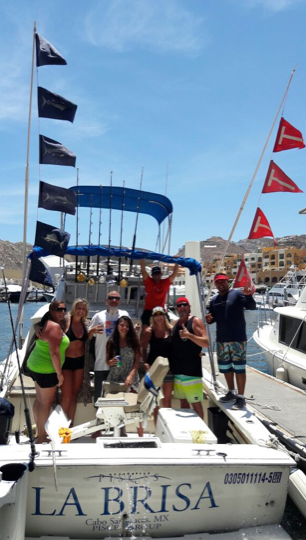 8 striped marlin released aboard the Pisces La Brisa this week, making it our top marlin boat this week (Photo by Oscar Ba?aga).

-The 31ft Pisces La Brisa captained by Bruce Monta?o alongside deckhand Frank Martinez was our top marlin releasing boat of the week. They managed to release an incredible total of eight striped marlin on the 22nd for a group of anglers from Canyon Lake, California. The lucky anglers where fishing out at the 95 Spot on caballito live bait. 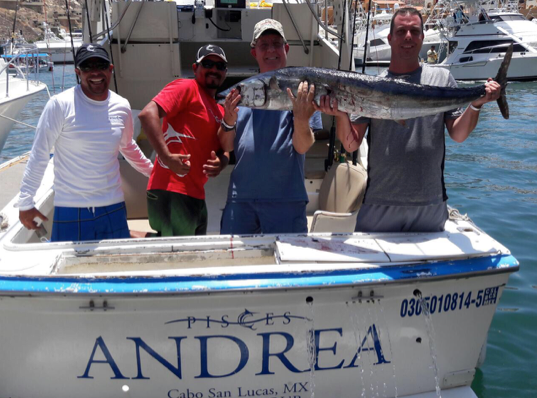 8 striped marlin released aboard the Pisces La Brisa this week, making it our top marlin boat this week (Photo by Oscar Ba?aga).

-The 61ft Pisces Tag Team had an incredible day on the 22nd for the Rightmire’s from Louisiana. Captain Nayo Winkler took them out in between the 95 Spot and Herradura when they released three different species of billfish. They released a blue marlin near 250 pounds on a petrolero lure, then they released two sailfish around 80-90 pounds and to finish it off they released a striped marlin of near 150 pounds. They were able to keep some eating fish, as they also landed a 15 pound yellowfin tuna. On the 26th they went out with some anglers from Dallas, Texas and landed another one of our rare (not so rare this month) Pacific shortbill spearfish. This fish was the largest one that Pisces boats have seen, it was estimated at near 70 pounds before being released and took caballito live bait. They also managed to land 16 yellowfin tuna all around the 15 pound mark, all fish were caught out at the Herradura. 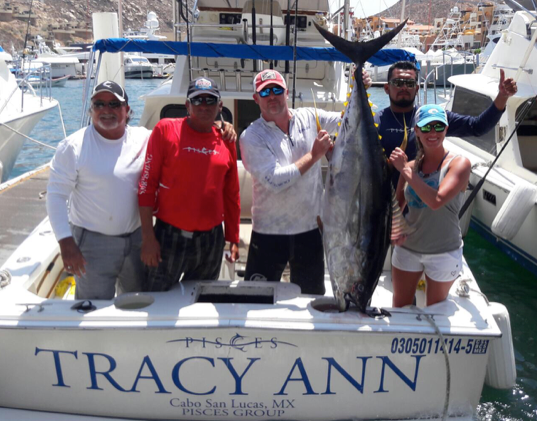 129 pound yellowfin tuna caught aboard the Pisces Tracy Ann about 28 miles out at the 140 Spot for Chris and Shanda from Texas (Photo by Oscar Ba?aga).

-The 31ft Pisces Tracy Ann captained by Julio Castro had a great day for their anglers from Avinger, Texas while fishing just out from the 120 Spot on the 24th. They released three striped marlin between 100-140 pounds and later in the day managed to release a near 250 pound blue marlin on a pink lure. On the 25th they took out a group of anglers from Ashburn, Virginia just out from the Herradura spot, when they managed to release a total of five striped marlin. All fish took caballito live bait and were in the 100 to 150 pound range. On the 28th Captain Julio was fishing with some anglers from Texas when a very large yellowfin tuna took their lime green lure about 28 miles out at the 140 Spot. 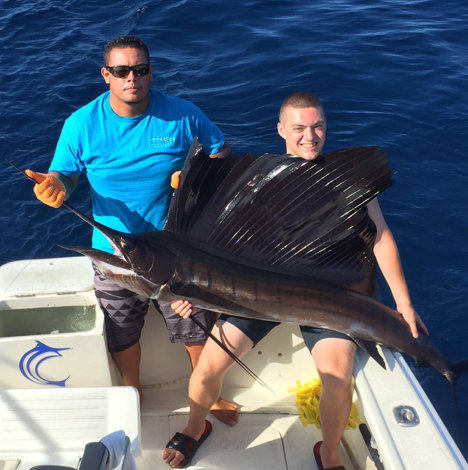 This angler from Phillipsburg, New Jersey shows off his sailfish before release aboard the Pisces Ruthless.

-The 31ft Pisces Ruthless captained by Roberto Padilla had a small group of anglers from Phillipsburg, New Jersey on the 26th. They undoubtedly left with sore arms after releasing two striped marlin of around 100 pounds and two sailfish also near 100 pounds. All fish took caballito live bait, while they were fishing about 10-15 miles south of the Old Lighthouse. 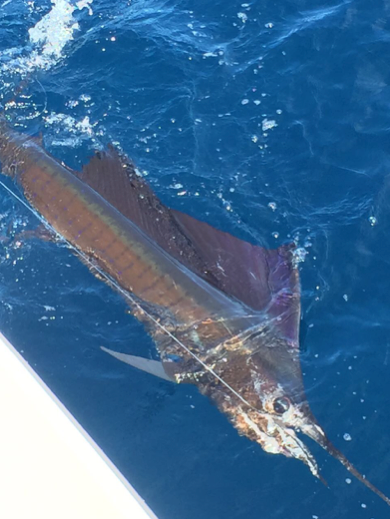 One of two sailfish coming in for release aboard the Pisces Ruthless on the 26th.

LOCATION: 95 Spot, Herradura and 20 miles south of the Old Lighthouse.

WEATHER CONDITIONS: Clear skies and calm seas most of the week, air temperatures in the high 80’s.