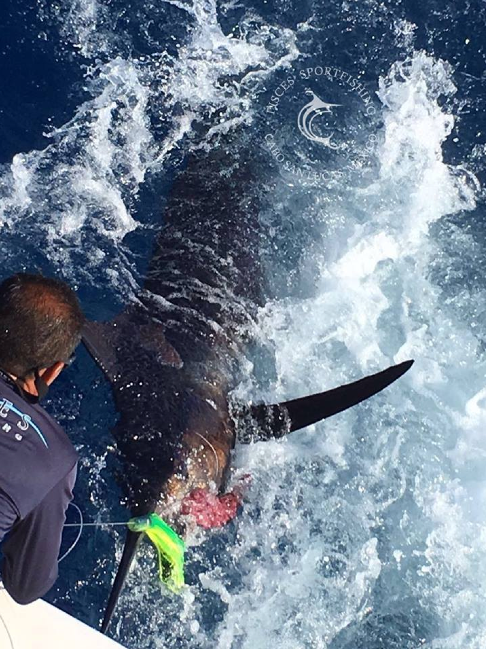 BILLFISH: This week saw some really awesome catches, and more than one grand slam (when three different species of billfish are caught in one day). The Pisces Rebecca started of the week strong with one striped marlin, one sailfish and one blue marlin all released. As well as a 15lb yellowfin tuna, caught for Chase and George from California. The next boat to do a grand slam was the Pisces 28ft Andrea, which also caught and released a striped marlin, sailfish and a blue marlin for lone woman angler Kathy from Austin, Texas; a totally spectacular day that showed us girl power all the way. The Pisces Ruthless ended up catching and releasing a striped marlin estimated at 180lb, for the Means from Texas, with this size striper being larger than usual for Cabo. The Pisces 42ft Hot Rod had a nice day for Corey and Randy from Austin, Texas. They caught and released a blue marlin of around 300lb. They also landed a nice 60lb wahoo, about 32 miles off of the Old Lighthouse. Finishing up the week our awesome summer billfish week was the 38ft Speedwell, while fishing out at the 11:50 spot they caught and released a striped marlin of around 100lb, as well as two blue marlins estimated at around 250lb each. Anglers were the Mikeal’s and Simpson’s from Idaho. 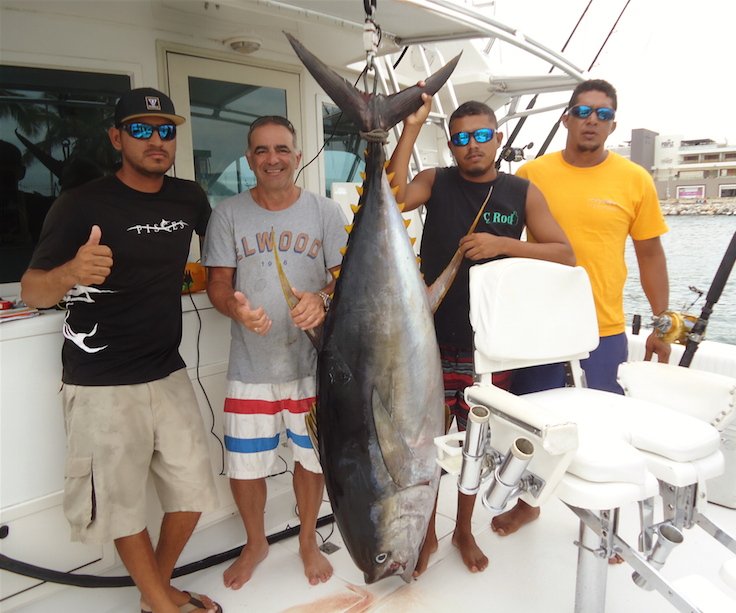 OTHER SPECIES: Yellowfin tuna continued to be the main feature for most of the week, with some being caught from the 15lb range, pushing up to the larger nearly 200 pounders. Lone angler Angelo from Queensland, Australia seemed to have brought some good fishing juju with him, as he was probably the most prolific angler for this whole week. He started off the week with an impressive 176lb yellowfin tuna on the Pisces 35ft Valerie, captained by Roberto Sandez and deckhand Salvador. Angelo continued his spectacular run on the Pisces C Rod, landing five dorado in the 15-25lb range, 12 yellowfin tuna in the 10-15lb range, and four wahoo from 20-38lb. With all of these being landed out at San Jaime bank. His third day out with us, also on the C Rod, Angelo landed 13 yellowfin tuna most being between 10-20lb, and three of them being larger at 80-90-175lb respectively. Ryan Cole and Ryan Massa from Colorado ended up catching 10 yellowfin tuna on their day out on the 35ft Valerie. While the Valerie worked her magic again for a group of friends from California, they landed 20 yellowfin tuna in the 10-20lb range, making for a fun day’s fishing for all aboard. As far as other species go, there was quite a hodgepodge of different types of fish, with dorado and wahoo being caught almost on all days this week, albeit in lower numbers. While there was also skipjack and amberjack caught, and lots of sharks being caught and released; mostly silky’s but also some mako and hammerhead. 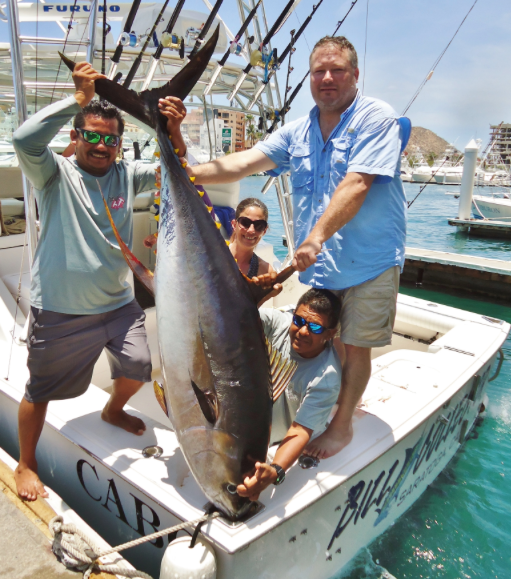 LOCATION: Fishing for larger game was all over this week, with the 11:50 spot, 95 spot, San Jaime bank, Herradura being the most prolific locations. Inshore fishing was around Pedregal, and off the Old Lighthouse for the smaller game.

WEATHER CONDITIONS: Most of the week saw clear to mostly clear skies, with clouds rolling in on the 28th. Air temperatures were around the mid 70’s to the 90’s most of the week, although the cloud cover helped to cool things down a bit at the end of the week.

AVERAGE WATER TEMP: Water temperature varied greatly this week, starting at 80? at the beginning of the week, going up to 86? by the end of the week.