BILLFISH: This week saw overall catches go down, with overcast and cloudy weather on many days and summer highs in the 80’s and 90’s. The 30th of July saw the boats catching lots of blue marlin, as well as striped marlin and a sailfish, showcasing the wide array of billfish available in Cabo’s summer to those anglers that can bear the heat. The 60ft Pisces Shambala captained by Nayo and deckhands Mario and Orlandito, landed a grand slam for Andy, Chris and Jake from Nebraska. The lucky group got a striped marlin, a blue marlin and sailfish; all were landed around the 11:50 Spot.  While the Pisces Tiburon, with Captain Rosendo and deckhand Abraham had a nice day for the Cerbin’s from Indiana. They caught and released a nice striped marlin, while landing a delicious eating fish, a 25lb wahoo. On August 3rd we saw the Bill Collector have a pretty nice day, catching and releasing a 180lb striped marlin. As well as landing a very nice sized yellowfin tuna, weighed in at 131lb for the McKibbins from Texas. The Pisces Cabolero Captain by Lupe, and deckhand Omar caught and released three blue marlin all about 26 miles off of Santa Maria Beach for Autumn and Joseph from Flemming Island, Florida.  They were landed on a purple lure, as well as caballito live bait. While on the last day of this week we saw the Bill Collector have another spectacular day, they caught and released a striped marlin estimated around 150lb. As well as catching and releasing two blue marlin of around 400 and 220lb respectively, although one of the blues didn’t survive. They were all caught around the 11:50 Spot, for Neil from California. 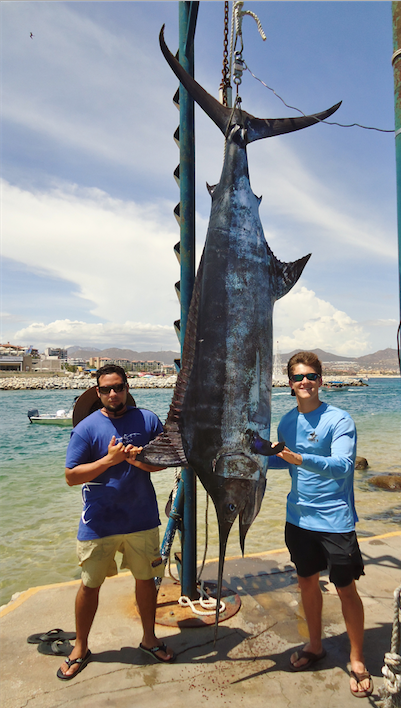 OTHER SPECIES: For the most part it continued to be yellowfin tuna if it wasn’t one of the billfish species. We continue to see catches spread throughout the week and have seen some very large specimens, interspersed with smaller ones here and there. On August 2nd we saw twin catches by the Pisces Adriana, that landed three yellowfin tuna, weighing 10-93-187lb each, about 35 miles of off the Old Lighthouse, for the aptly named Fisher family from Dallas, Texas. The fish were landed on a tigrillo lure and a cedar plug. While the Pisces Knot Workin did the exact same catch that day for a group from New York. They fished off the San Jaime bank, and landed three yellowfin tuna of 10-20-110lb each. Our largest yellowfin tuna of the week was a monster 187lb, landed on August 3rd for a group of anglers from Manhattan Beach, California. This big guy was landed after a two and a half hour fight, on the Pisces Cabolero captained by Lupe and deckhand Omar, about 26 miles off the Lighthouse in Cabo San Lucas. As far as other species go, there were few dorados caught, with some sharks caught and released. A few boats also landed a few skipjacks, with up to ten in one day.