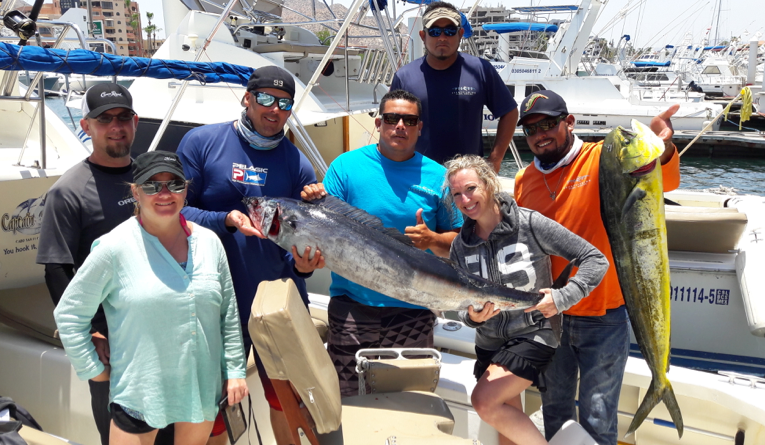 Happy anglers Chris Flowerday, Paula Gorensen, Ron Smith and Sandra Johnson from Springfield, Oregon and their three-man crew aboard the Pisces Ruthless with their 45 pound wahoo and 12 pound dorado.

Our week started off with most boats catching fish, and then tapering off until with most boats skunked on the 23rd, unfortunately the same day as the start of the annual Stars and Striped charity tournament. Boats travelled high and low this week in search of fish, with a range of places being productive. We saw the most consistent inshore catches around el Tule on the Corridor, with some of the species seen being: roosterfish, triggerfish, jack crevalle, skipjack, yellowtail, amberjack, pompano, red snapper and green jacks. Offshore fishing was spread out from the Old Lighthouse all the way to Punta Gorda in San Jose and in some cases travelling many miles offshore. 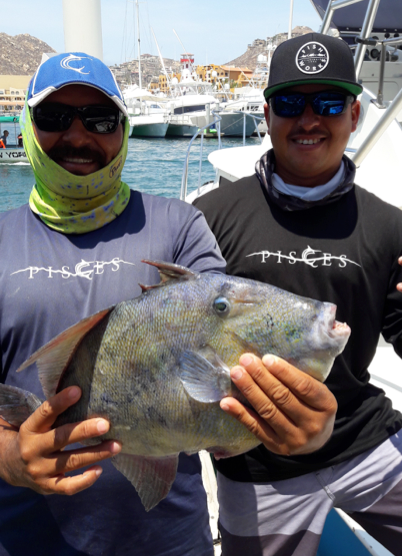 Pisces crewmembers Silvestre and Enrique show off this “monster” triggerfish at the Pisces dock.

Our top marlin boat this week was the Pisces Valerie, which released a total of four striped marlin ranging from 100 to 180 pounds. All fish were caught at the 180 Spot on mackerel live bait, for a group of anglers from California. The Pisces Bill Collector also had luck at the same location on that same day, releasing two striped marlin on caballito live bait for the Collins from Nevada. The Pisces Adriana had an exciting day for their clients, hooking into and releasing a 130 pound striped marlin, as well as a massive 200 pound hammerhead shark. They were fishing just off from popular swimming beach Santa Maria, with caballito live bait. The Pisces Valerie was fishing with some anglers from Piedmont, California at el Tule. Where they got into some nice roosterfish action, releasing four in the 20-35 pound range, as well as a 20 pound jack crevalle. As far as eating fish goes, they managed to land a red snapper and 16 triggerfish (only the biggest kept). Talking about eating fish, the Pisces Ruthless had a real nice day for their anglers on the 20th, landing a 12 pound dorado as well as a 45 pound wahoo. The lucky anglers fishing that day are from Springfield, Oregon.

LOCATION: All over from the Pacific to the Cortez and far offshore, with inshore action focused near the Corridor.

WEATHER CONDITIONS: Clear skies and calm seas at the beginning of the week, switching to partly cloudy skies and moderate seas at the end of the week. Temperatures also changed in the second half of the week, with the average dropping from 80?F to around 70?F.

Based on the catches of Pisces Sportfishing Fleet by Glenn Ehrenberg, photos by Abraham Herrera.