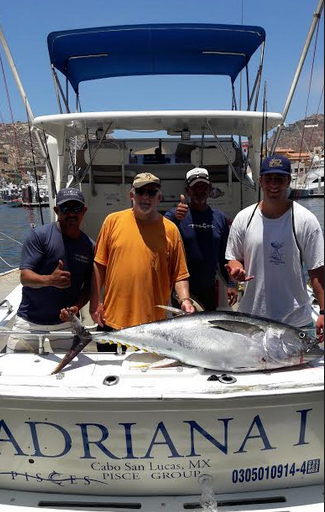 The Frye’s from Newport Beach with their 110 pound yellowfin tuna caught aboard the Pisces Adriana (photo by Abraham Herrera).

Fishing this week saw some improvements in the overall numbers, with a majority of boats (69%) landing yellowfin tuna. Most of these fish were in the 10-20 pound range, however we did see the odd larger tuna on some boats. There were also good numbers of striped marlin seen, and fewer inshore fish species as boats focused offshore. Pisces boats caught the following species this week: wahoo, jack crevalle, roosterfish, grouper, mako shark (released), skipjack, red snapper, triggerfish, and bonita. The fishing mostly centered offshore and more towards the Cortez side nearer San Jose. 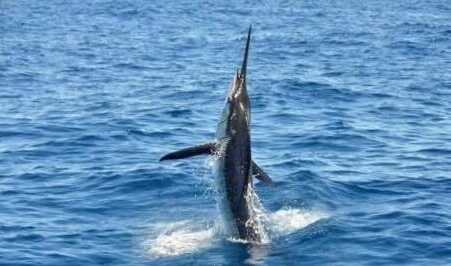 Allison King sent in this photo of one of their striped marlin on the Pisces Yahoo.

Our top catch this week must go to the Pisces Adriana captained by Nicolas Winkler, they were fishing with Elliot and Stuart Frye from Newport Beach about 30 miles offshore from Cabo San Lucas when they landed an awesome 110 pound yellowfin tuna, as well as a 15 pounder. The fish took about an hour and a half to bring to the boat and was landed on a green lure. Our top marlin boat this week was the Pisces Tracy Ann, captained by Julio Castro and deckhand Martin Gonzalez. Their best day was on the 25th, when they took out the Morrison’s from California. Heading out to the 1150 Spot, they managed to release three striped marlin between 110-140 pounds on caballito live bait. While trolling with cedar plugs produced five yellowfin tuna in the 10-15 pound range. They had a similar day fishing in the same location on the 24th with a group of anglers from Houston, Texas. They managed to release two striped marlin in the 100 pound range as well as taking four yellowfin tunas in the 10-15 pound range. The Pisces Yahoo, captained by Ricardo Escamilla had a great day for the King’s from Alabama. They where fishing about 20 miles out from shore when they got into the striped marlin action, releasing three in the 100-130 pound range. They also managed two 10 pound yellowfin tunas on a red & black lure.

WEATHER CONDITIONS: Varied between some clouds and clear days, seas were moderate to calm. Air temperatures averaged in the upper 70’s.