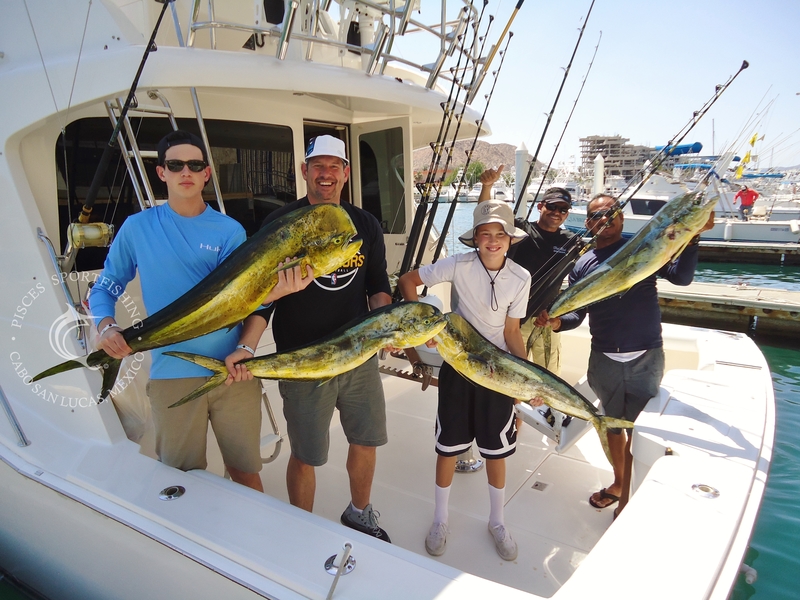 Pictured above are Will, Pierce and Drew Mehrten from Alamo, CA; with some nice Dorados. On board the Hot Rod, with Captain Erick, and deckhand Ramiro.

MARLIN: The week started out well with some good marlin catches, such as those aboard Pisces Tracy Ann who had the Cameron and Chrobak party on board from Frisco, Texas. They headed out to a place the crews call “La Ballena” and managed to catch and released three striped marlin that ranged from 90 to 145 LBS on live bait. The Tepeyac fishing club from mainland Mexico honored us with their business again this year and Pisces Valerie did not disappoint, releasing three marlin up to 160 LBS for club members Eduardo Vaudrecourte, Juan Manuel Cobar and Mike De Cardemar. Their three fish were caught on frozen ballyhoo and they fished the Cabrillo sea mount off of San Jose. Catch of the week has to go to Pisces Knot Workin with three striped marlin released and seven tuna for Dion Reif from Penn Valley, California – his goal was to catch his 11 year old daughter Susan a marlin and we were able to do just that and more. They fished 8 miles out from Sunset Beach with the marlin caught on live bait and the tuna on lures. Other boats managed a single marlin often with a couple of tuna or a dorado thrown in. The fish became fussy as the week progressed with even some of our best marlin boats finding it hard to get a solid hook up. Seeing marlin, casting bait to them but finding them at times disinterested. The fish are not in one set location and are spread out both on the Pacific and Cortez side. Thirty five percent of charters caught marlin giving us a total of 24 fish released. 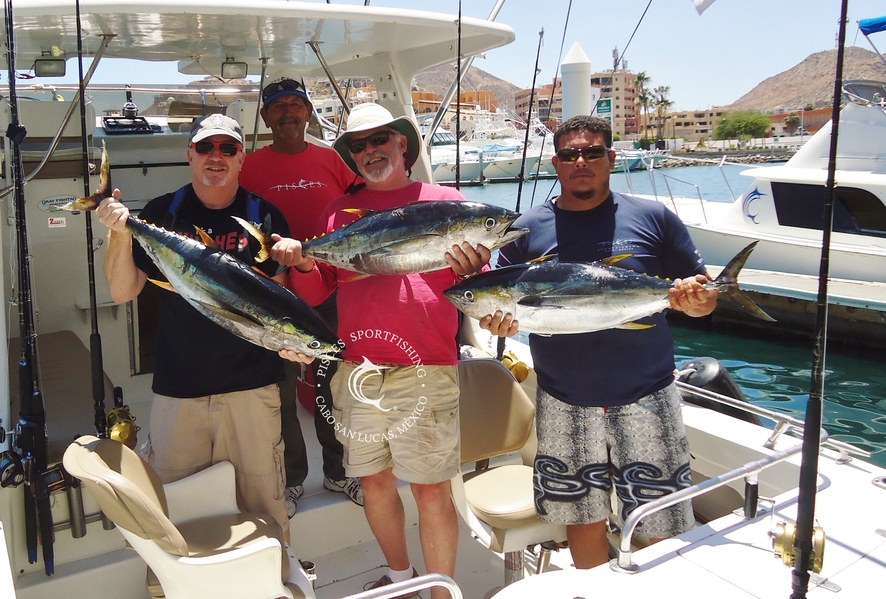 Pictured above are Michael Hugues and Michael Hicks from San Francisco, CA; with some Yellowfin Tuna. On board the Adriana, with Captain Nicolas and deckhand Chato.

OTHER SPECIES: There were more tuna caught this week than any other type of fish, in fact our charters totaled 201 fish, the weights though were not of record size , but still tasty. Pisces Tracy Ann had the most prolific one day catch with the same anglers from Frisco, Texas that fished earlier in the week,  the Cameron’s and Chrobaks; they loaded up on smaller tunas for a total of 32 fish caught on cedar plugs, 31 miles from the 210 spot, so quite a boat ride. Other boats caught anywhere from one to nineteen fish in diverse locations both on the Pacific and Cortez side. Pisces Flora T had an enviable day on June 26th, with ten tuna, a striped marlin and hammerhead shark released for Dana and Ramsey Davis from California.  Forty nine percent of our charters were able to catch tuna this week. Dorado catches are creeping up barely imperceptibly with twenty two percent of our boats catching fish up to 15 LBS. Pisces La Brisa caught six dorado off of Todos Santos on live bait for Cade and Haley Smith; this was the best dorado catch of the week. Our boats concentrated mostly offshore this week but those closer in managed to catch a few skipjack.

Remember, we go where the fish are! Give us a call to book your trip.

Based on the catches of Pisces Sportfishing. 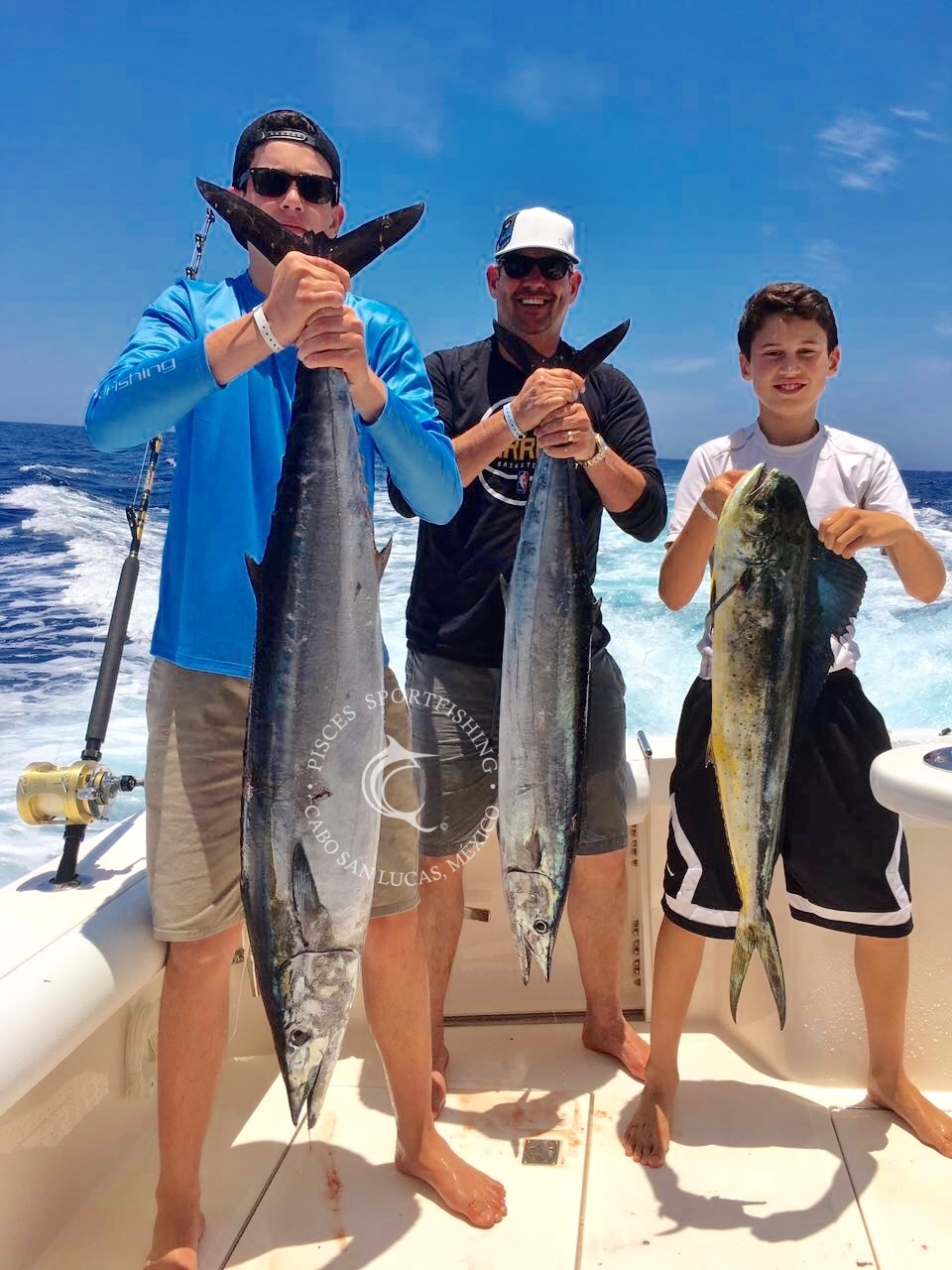 Pictured above are Will, Pierce and Drew Mehrten from Alamo, CA; with two nice Wahoos and a Dorado aboard the Hot Rod. 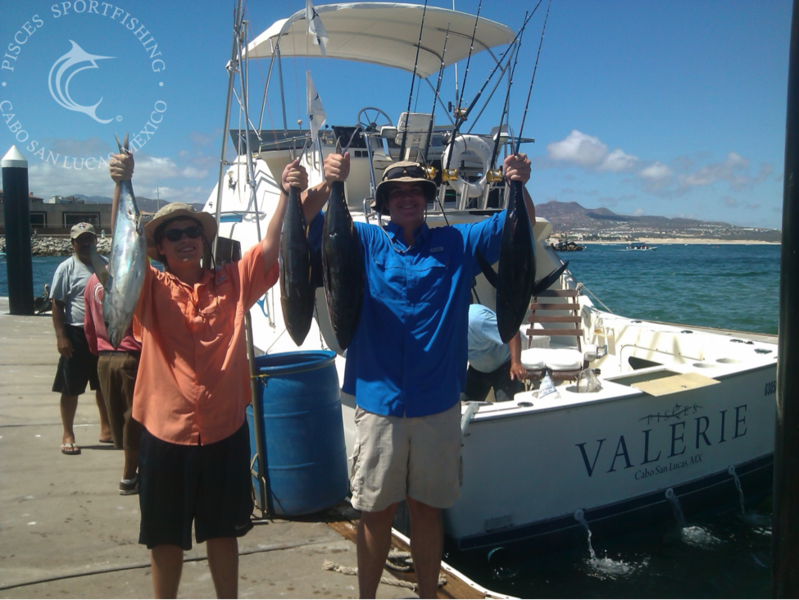 Some nice Yellowfin Tuna caught on oard the Pisces Valerie.