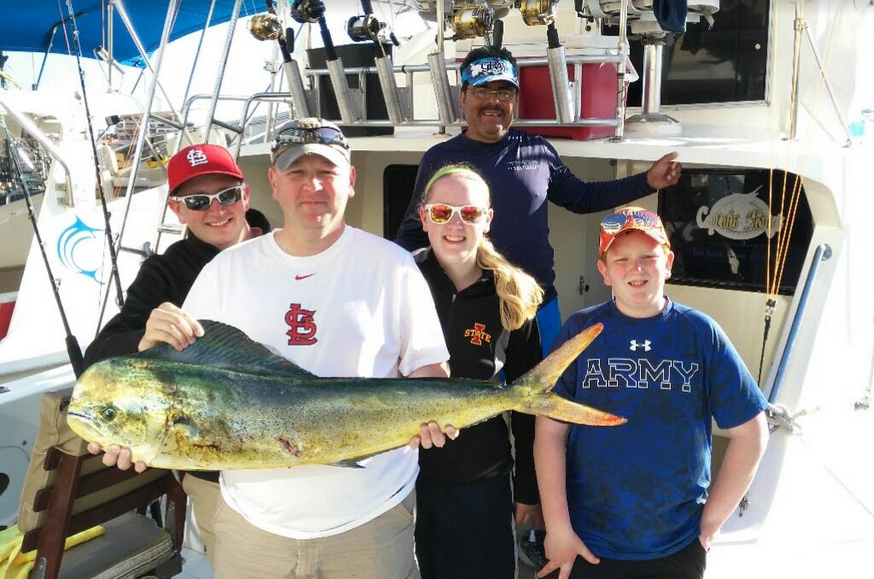 Nice 20lbs dorado aboard the Pisces Valerie, for this family from Sioux City, Indiana.

We had great catches this week, with many species of inshore fish in large numbers making an appearance. This week, the “other” category (75% catch success rate) was populated with: sierra mackerel, red snapper, sea bass, grouper, pompano, yellowtail, ladyfish, roosterfish; as well as thresher, hammerhead and mako sharks. Since most of these aren’t too big, they make the perfect fish for the whole family to target. We would also note that there have been reports of big wahoo catches out of San Jose, which perfectly represents our variable fishing as the seasons change. With that being said, the Pisces Bill Collector managed to break the pelagic slump this week, landing a 280lbs blue marlin on a petrolero lure that was released. Captain Juan Carlos put these anglers from Reno, Nevada on a 20lbs yellowfin tuna, as well as a beautiful 49lbs wahoo; with all of the fish being landed about 30 miles out at the 160 Spot. We also had two striped marlin landed (1 released) aboard the Pisces Andrea, captained by Orlando Murillo. The fish were estimated at around 140lbs, and were caught on macarela live bait just outside of the 180 Spot for some anglers from Wheatland, Wyoming. 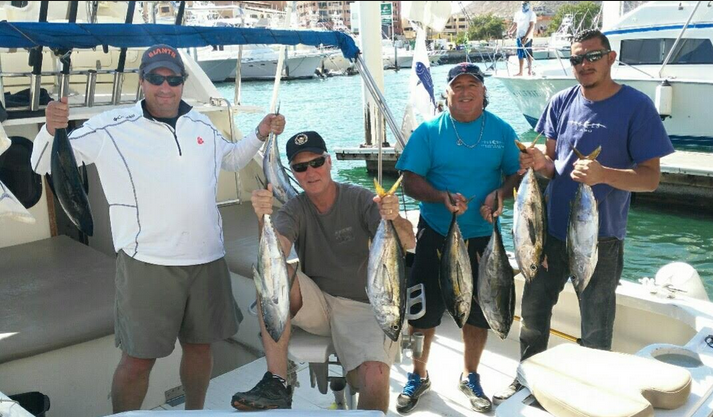 Lance and Paul from Chico, California showing off their catch aboard the Pisces Tracy Ann.

Another interesting and large catch this week happened aboard the Pisces C Rod, captained by Abel Ramirez. They were fishing with a group from Mexico City, when they set macarela live bait out on the lines. To their surprise a massive 200lbs hammerhead shark took the bait, this monster fish was safely released unharmed back into the wild. The Pisces Tracy Ann had a nice, although anomalous day on the 14th. Captain Julio Castro put their anglers from Chico, California on 23 yellowfin tuna. They were fishing with cedar plugs about 45 miles out of Cabo at the San Jaime Bank. 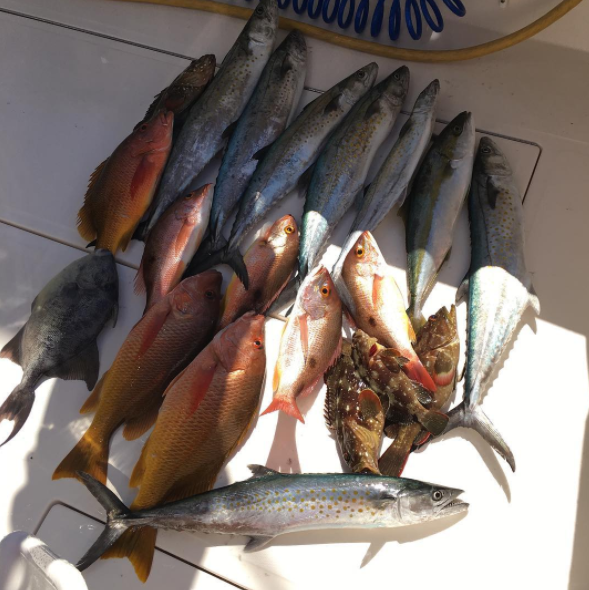 Sierra, snapper and sea bass aboard the Pisces Hot Rod, in this photo by captain Erick Orozco.

A representative day for the smaller game fish that we saw this week is shown aboard the Pisces Ruthless, on March 13th. They caught three sierra mackerel, a grouper, a red snapper, 15 triggerfish and a yellowtail, all of this for the Culbertson family of Arizona. The Pisces Cabolero captained by Hector Anaya put his anglers from Lake Barrington, Illinoison to two roosterfish of around 20lbs each. They were caught on macarela live bait out at Migri?o on the Pacific side. While the lone dorado of the week was caught aboard the Pisces Valerie just off of Destiladers on a kite lure, and it weighed in at around 20lbs.