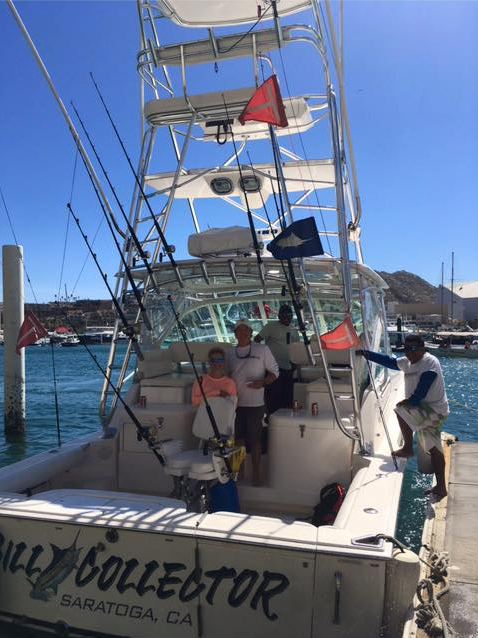 The Pisces Bill Collector shows off its four catch and release flags from a productive day (photo by Eduardo Vazquez).

We had fairly good fishing this week, with 74% of all boats that went out landing some kind of fish, mostly we saw inshore fish being landed. The most common smaller game fish that Pisces boats caught this week were: sierra mackerel, red snapper, wahoo, amberjack, ladyfish, grouper, skipjack, sea bass, pompano and even the odd mako shark. Although the most notable story this week is the return of the striped marlin bite; we mostly saw boats landing them around the 95 and 11:50 spots. The marlins were sometimes encountered with wahoo, although it seemed like it was a bit hit and miss for them to take bait, with some boats seeing many but not having a single bite. Our top marlin boat this week was the Pisces Valerie captained by Roberto Sandez, on the 28th he went out to the 11:50 spot, were they caught and released four striped marlin for a group of anglers from Valparaiso, Indiana. While on the 27th, captain Roberto put a group of anglers from Seattle Washington on three striped marlin (released) around 100-130lbs at the 95 spot. All fish were landed using macarela live bait.

The Pisces Bill Collector also had a good day catching and releasing four striped marlin for the John’s from El Paso, Texas. Their largest fish was estimated near 180lbs and landed at the 95 spot. While the Pisces CRod had a nice day out fishing in between the 95 and 11:50 spots, landing a nice 45lbs wahoo. And then catching and releasing two striped marlin near 120lbs. On the 31st we saw the Pisces Ruthless catch and release a nice 100lbs striped marlin at the 11:50 spot, as well as landing 14 yellowfin tuna for some anglers from Florida. Marking the return to yellowfin tuna we saw the Pisces Tracy Ann come in as top tuna catcher, with 24 tuna landed, most were about football sized.