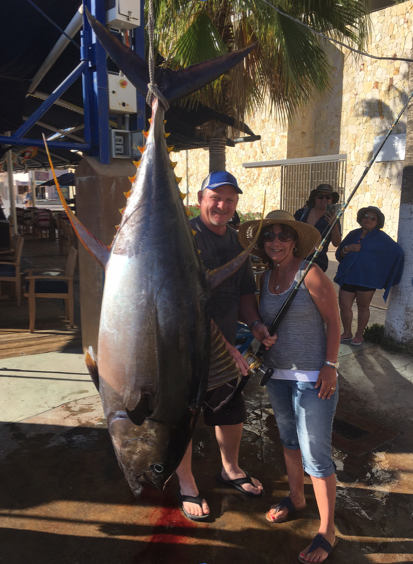 John and Maria Dlouhy next to his 241lbs yellowfin tuna landed aboard the Pisces Valerie.

This week was the tale of two bites, the inshore roosterfish bite and the offshore yellowfin tuna bite. Pisces boats focused on the inshore roosters in the first half of the week, landing some very large specimens that were sure to give any angler a thrill as they reached anywhere from 45 up to 60lbs. While we saw the tuna bite get hotter in the second half of the week, with some boats landing fish from football size in large numbers up to a fish in the triple digits. There was a reduction in some of the other species targeted as the main catch was tuna, striped marlin and the odd dorado and wahoo, however some boats still landed sierra mackerel and even an amberjack. However, our top story this week is without a doubt the landing of a 241lbs yellowfin tuna aboard the Pisces Valerie by the Dloughy’s of Nevada. Captain Roberto Sandez was fishing on the Pacific near the Old Lighthouse when the fish struck their cuchi lure. It hit a setup with 40lbs test line, and gave angler John Dloughy an eight-hour fight before being boated. This is the experience in John’s own words: “As for the roosterfish bite, our top boat this week was without a doubt the Pisces Ruthless. Captain Roberto caught and released nine roosters from 30 all the way up to 60lbs, also making it the boat with the largest roosterfish this week. But that wasn’t it, as they also caught and released both a 130lbs striped marlin and a 20lbs Jack Crevalle for the Cahill’s from Florida. The Pisces Andrea also had a very nice rooster catch that same day, with four fish in the 40-50lbs range. Our top marlin release boat this week was the Pisces La Brisa with captain Bruce Monta?o, he put the Babineaux’s of Louisiana on three striped marlin (released). As well as being able to land some good eating fish with a 15lbs dorado and three tunas of around 10lbs. Later in the week, we saw that the yellowfin catches began to increase with the Pisces Cabolero being a good example. They landed 20 tuna on cedar plugs for their anglers from California, as well as catching and releasing a small dorado and two 100lbs striped marlin. 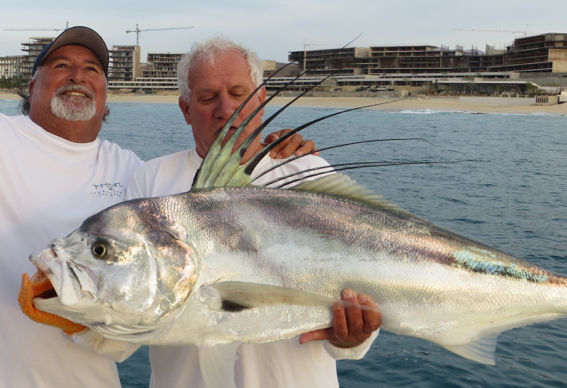 Angler Gerard Krause of Ohio lifts up this near 40lbs rooster accompanied by the captain of the Pisces Tracy Ann, Julio Castro.

WEATHER CONDITIONS: We had clear skies with mostly calm seas throughout the week, and daytime air temps in the low 80’s. 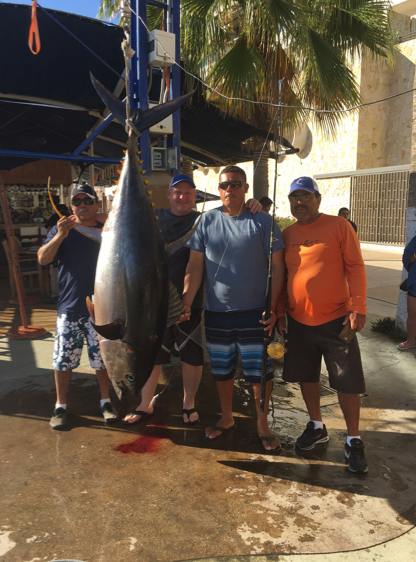 John Dlouhy (center right) next to his 241lbs yellowfin tuna landed aboard the Pisces Valerie, accompanied by captain Roberto Sandez and deckhand Salvador.