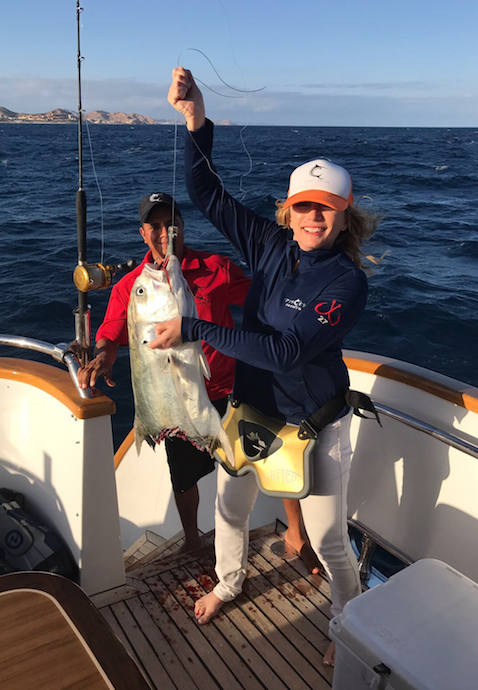 Pisces Sportfishing general manager Tracy Ehrenberg aboard the Pisces Contessa, shows off what would have been a nice Amberjack, this one was attacked by a hammerhead shark.

This week we saw a fairly good catch success rate for the boats that went out, the week started with just two boats and then on the 7th and 8th we had a port closure due to strong wind conditions, which lead to rough seas. Striped marlin made up the bulk of the fish encountered by Pisces crews this week, with some inshore fish, such as: yellowtail, roosterfish, jack crevalle, grouper and red snapper, as well as the odd wahoo. This week we had a tie for top marlin releases per boat, the Pisces Andrea captained by Orlando Murillo was with a fisherman from Las Vegas, Nevada at the 11:50 Spot, when they caught and released two striped marlin near 120lbs each, they were landed on caballito and cocinero live bait. While the Pisces Tracy Ann captained by Julio Castro was on the Cortez side with a father and son team from Mission Viejo, California caught and released two striped marlin, both were landed on caballito live bait and were between 120-130lbs.

While we also had a group of anglers from San Diego, California that caught and released a striped marlin near 120lbs, as well as getting a really nice 50lbs wahoo, giving some really good eating fish for the whole group. Their day was spent aboard the Pisces La Brisa, captained by JR Alucano they fished on the Sea of Cortez side. The Pisces Knot Workin captained by Tito Olascoaga had a nice inshore day, they were fishing with yoyos when they landed two 10lbs yellowtail just off Cabeza de Ballena, for their anglers from California.

LOCATION: Sea of Cortez side, near San Jose inshore.

WEATHER CONDITIONS: Clear skies with strong winds and moderately rough seas during the beginning of the week, leading to a port closure on the 7th and 8th, with air temperatures in the mid to upper 70’s.