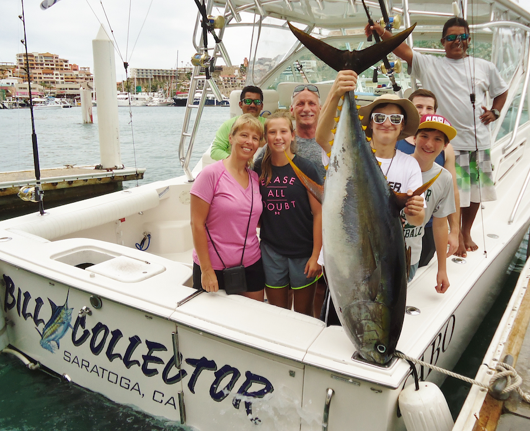 Bill Collector is at it again, landing a large yellowfin tuna this week.

BILLFISH: This week our main story is the passing of Hurricane Newton through the area on Tuesday. The storm made landfall on Tuesday night as a category 1 storm, bringing strong winds and rains. When the morning came it was obvious that this storm was not very destructive at all, causing some leaks in homes, and generating windblown debris from plants and signage. In fact, Hurricane Newton will probably end up bringing more benefits than damage to the region, as these tropical storms are Cabo’s main source of water. This winter season we will have an astoundingly green and lush landscape due to all the rain we’ve had. Making Cabo’s desert seem more like tropical Hawaii than Arizona. With all that being said, it did have an impact on fishing, as the port was closed on Tuesday and Wednesday. Resuming on Thursday the 8th, so this week’s fish report will only include five days. And despite all this, the days that we were able to fish, we saw some fabulous fishing. Our week started with most boats landing bucket-loads of fish of all different kinds. Best exemplified by the Pisces Tracy Ann captained by Bruce Monta?o, who took out a group of anglers from Colorado. They ended up catching and releasing three striped marlin, 15 dorado (10 little guys released), and six skipjack (also released). The Pisces Rebecca also managed a nice triple striped marlin catch and release, as well as landing ten dorado for a group of anglers from Pennsylvania. On the 4th, the Pisces Rebecca repeated its marlin magic, landing a striped marlin, and a black marlin estimated at around 200lb (both released). As well as having two blue marlin get off the line, making this our top billfish boat for the week. The day before hurricane Newton, saw a fantastic day for the Pisces Tracy Ann, and anglers Jeff, Paul, Phillip and Tim from Gary, Alabama. They managed to catch and released three striped marlin, as well as landing two dorado and three yellowfin tuna in the 25lb range. 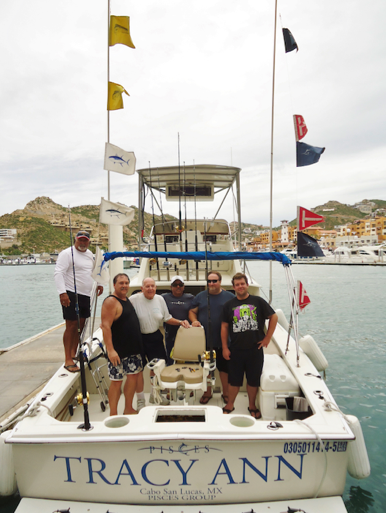 Jeff, Paul, Phillip and Tim at the dock after a great day’s fishing, the day before Hurricane Newton.

OTHER SPECIES: This week saw a nice mix of catches, with dorado being the most prevalent of all. The fish were all quite young and on the smaller size, including the yellowfin tuna. Which were generally a bit smaller this week. With that being said, there was one exception to the rule, and that was the Pisces Bill Collector. They landed a nice 110lb yellowfin tuna just of the San Jaime bank, for a group of anglers from Longmont, Colorado. As well as landing two more in the 30lb range. The Pisces Shambala captained by Nayo Winkler headed out to Las Margaritas the day before Newton, and they sure had a spectacular day for a group of anglers from California. They caught and released a striped marlin, as well as four dorado’s, fours skipjack, and the only wahoo of the week at 35lb. The first day back fishing, on September 8th, saw The Pisces La Brisa, captained by Bruce Monta?o as our top boat, catching and released a nice sized striped marlin. As well as a dorado and 16 yellowfin tuna ranging from 15-20lb. 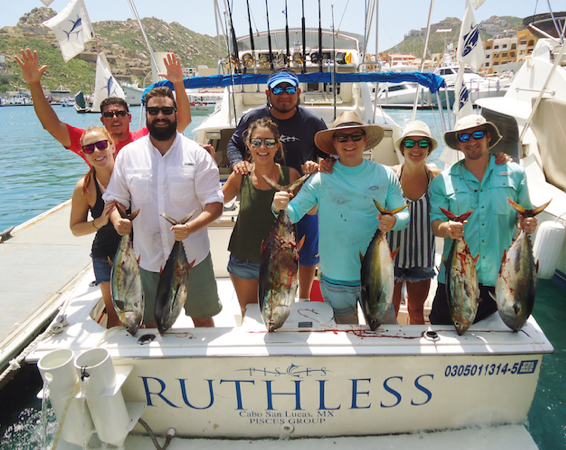 Back on the Tuna grind, first day fishing after Hurricane Newton.

WEATHER CONDITIONS: Our main weather event this week was hurricane Newton. For the rest of the days we saw overcast conditions, with the sun returning towards the end of the week.

AVERAGE WATER TEMP: Mid to low 80’s most of the week.