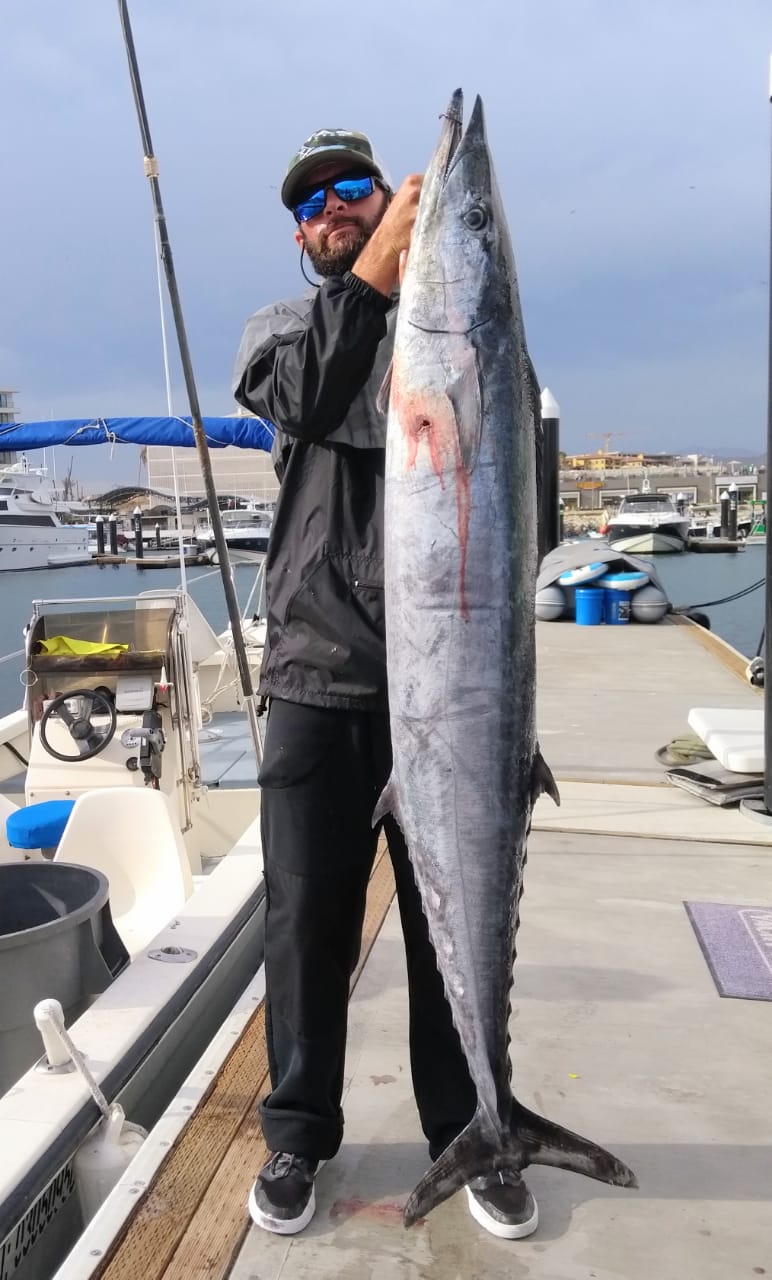 Cabo has been small game fishing heaven this week! Consistent small game catches ranging from red snapper to grouper to yellowtail and so much more. Still some sierra, ladyfish and triggerfish too. We algo got a nice surprise when Pisces Tag Team III  hit the dock with a nice 42 lbs wahoo! Marlin were also scattered in, with 1 to 2 fish released per boat, usually along with some kind of small game eating fish. Tuna picked up towards the end of the week, with boats catching up to 15 yellowfin tuna each; mostly footballs (15- 30 lbs).

Beginning the week, Pisces 37′ Tag Team III  hit the dock with 6 nice yellowfin tuna of about 15 to 25 lbs each, hitting on cedar plugs, out at about 33 miles at the 190 Spot. A wahoo hit one of the green lures they set out too, it weighed approx 42 lbs at the dock. Anglers were Gary Odom, Karen and Nick Curia and Roberto Chavez, from Washington. 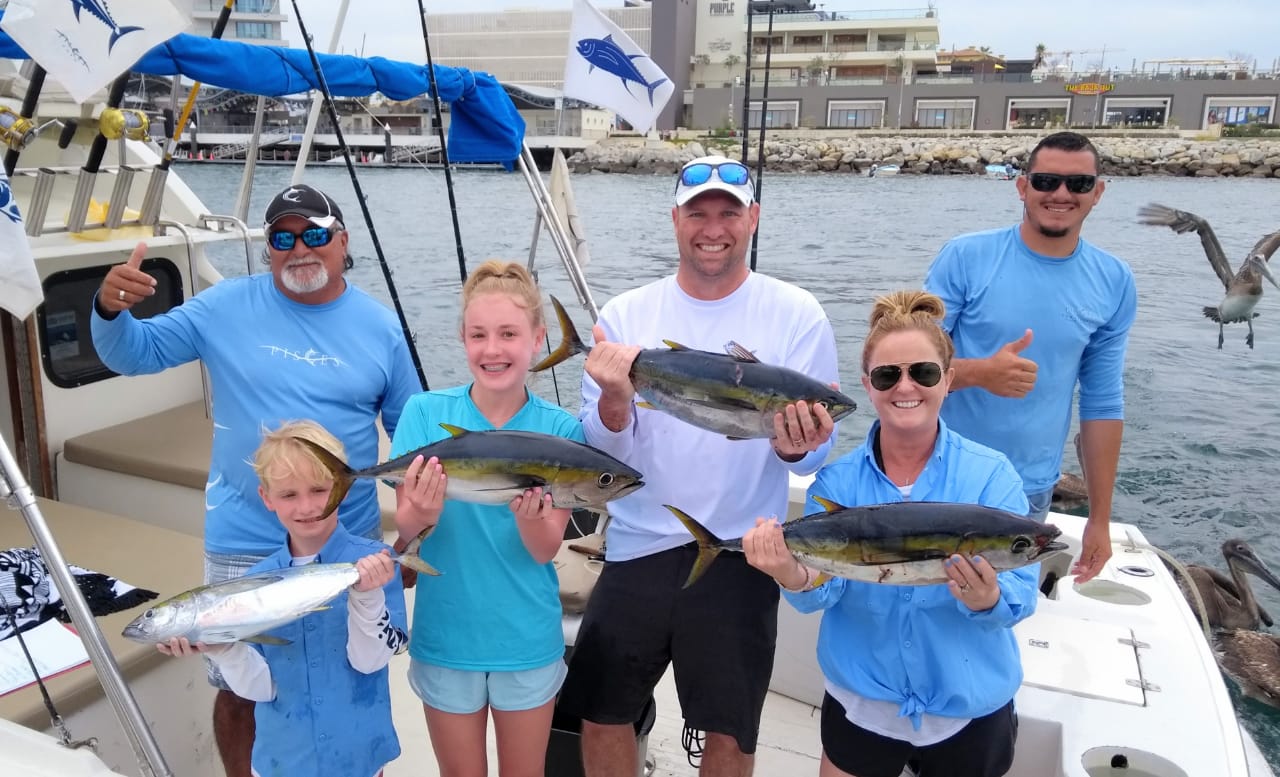 More tuna on this same day, March 17th,Pisces 31′ Tracy Ann headed to San Jaime and released a nice striped marlin of about 150 lbs on caballito bait. Afterwards, the crew searched for some tuna and got 10 yellowfin on cedar plugs; ranging from 10 to 12 lbs each.  Anglers included 12 year old Ella and 8 year old Ryder Kennedy, who did a great job at fighting their fish!

Pisces 42′ Caliente did well this day too! They released 1 Striped marlin on mackerel bait at Golden Gate and kept 7 red snapper, which they found at the Los Arcos area. Later in the week they would head to the 210 spot, about 30 miles out, and release a nice striped marlin on mackerel, and keeping 5 yellowfin which hit on cedar plugs and feathers. They also captured 2 red snapper in this same area, hitting on mackerel bait. 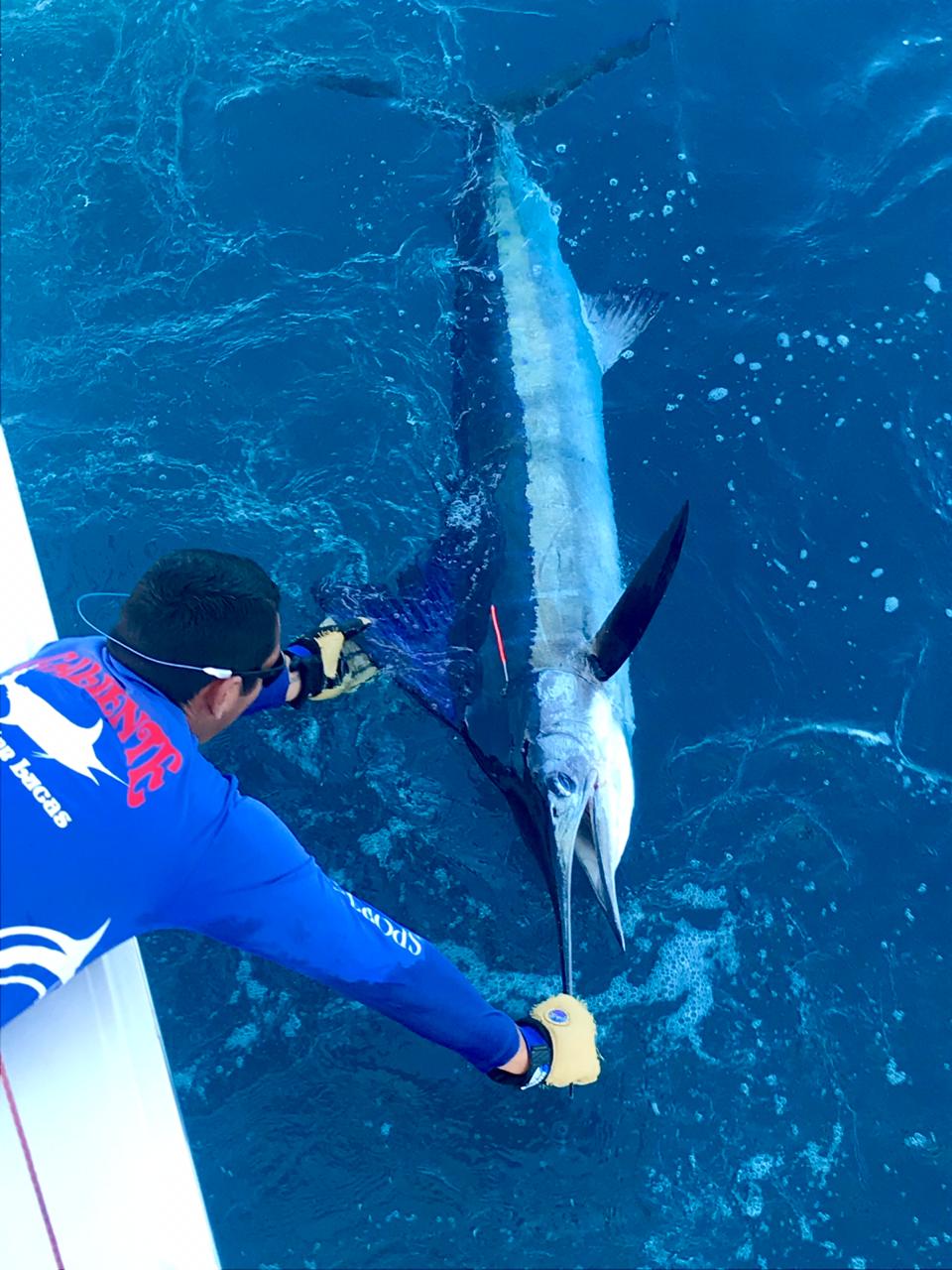 Our other 42′ Cabo, the Hot Rod  had a nice day later in the week, with 1 striped marlin released of about 120 lbs, which hit on caballito bait at San Jaime and then threw out some cedar plugs to land some nice yellowfin tuna, 10 in total.

Similar to the Caliente, the next day,, Pisces 31′ Rebecca released 1 striped marlin at Golden Gate as well, on mackerel. The marlin weighed an approximate 180 lbs, a very decent size fish indeed. They then headed to Los Arcos and kept 4 red snapper. Anglers were Jacob, Luca and Noah Drewes and Meegan Panzarella from FL. Later in the week, the Rebecca   did well again with “small” game, catching 2 grouper of by chumming at Migrino, along with 3 triggerfish and 3 nice yellowtail that hit on mackerel. The yellowtail were all around the 30 lbs range. 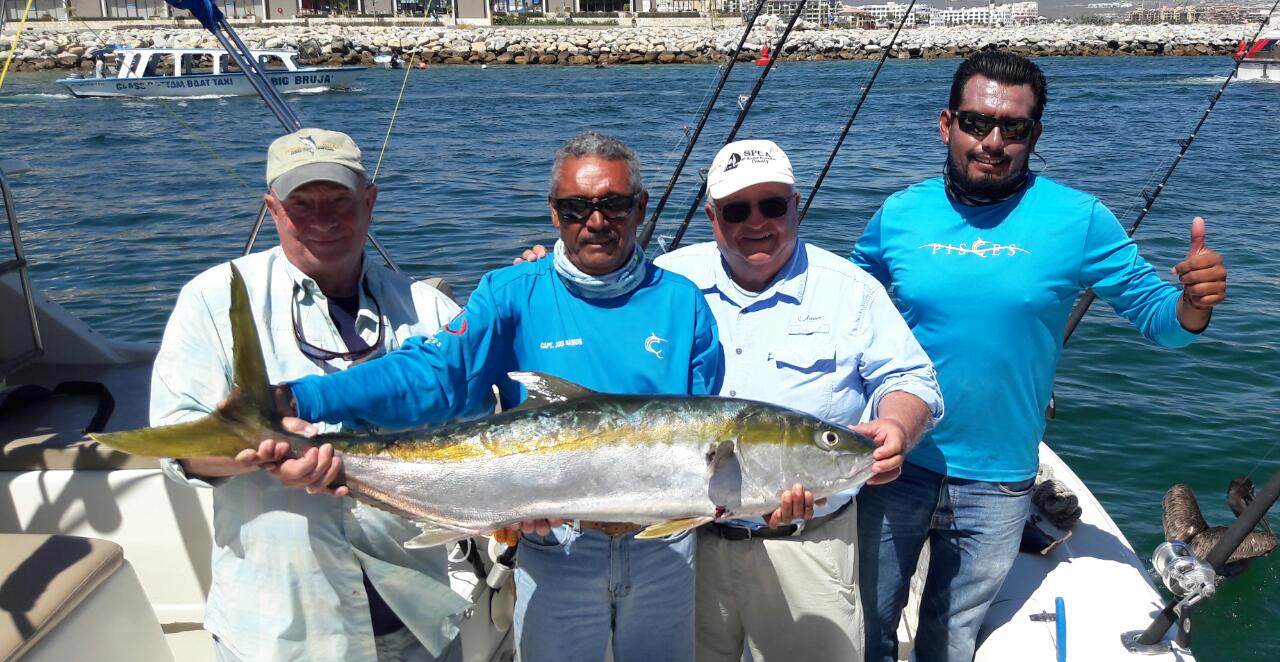 1 of 3 Yellowtail caught on Pisces 31′ Rebecca

Our top boat for small game this week was definitely Pisces 28′ Andrea, , without one, but many days looking like the next one described here! Anglers James Jordan and Pam Ediger headed out at 6:45 am on March 18th and threw in lines at Golden Gate where they got a bite on a mackerel bait. They successfully released a 80 lbs striped marlin and then also got another mackerel bait taken by a small Mako Shark which they also released. After this they headed closer to shore, near Migrino and landed 5 grouper, by chumming, of about 10 lbs each. They also caught 5 Ladyfish and 2 skipjack and were back at the dock by 12:45 pm!

On another day, the Andrea caught 4 Grouper by chumming at Migrino, 5 Ladyfish, along with 1 Bonita and 3 babosas, caught by anglers the Kelser’s and Brown families from Wyoming.

Pisces 31′ Ruthless  also caught and released 2 mako shark this week, again at Golden Gate. They also released 2 striped marlin of about 110 and 150 lbs each there. And to close out the week, the Ruthless caught 13 yellowfin tuna between 10 and 25 lbs each, which hit on cedar plugs and feathers at the 210 Spot. Anglers were the Daniels family from CA. 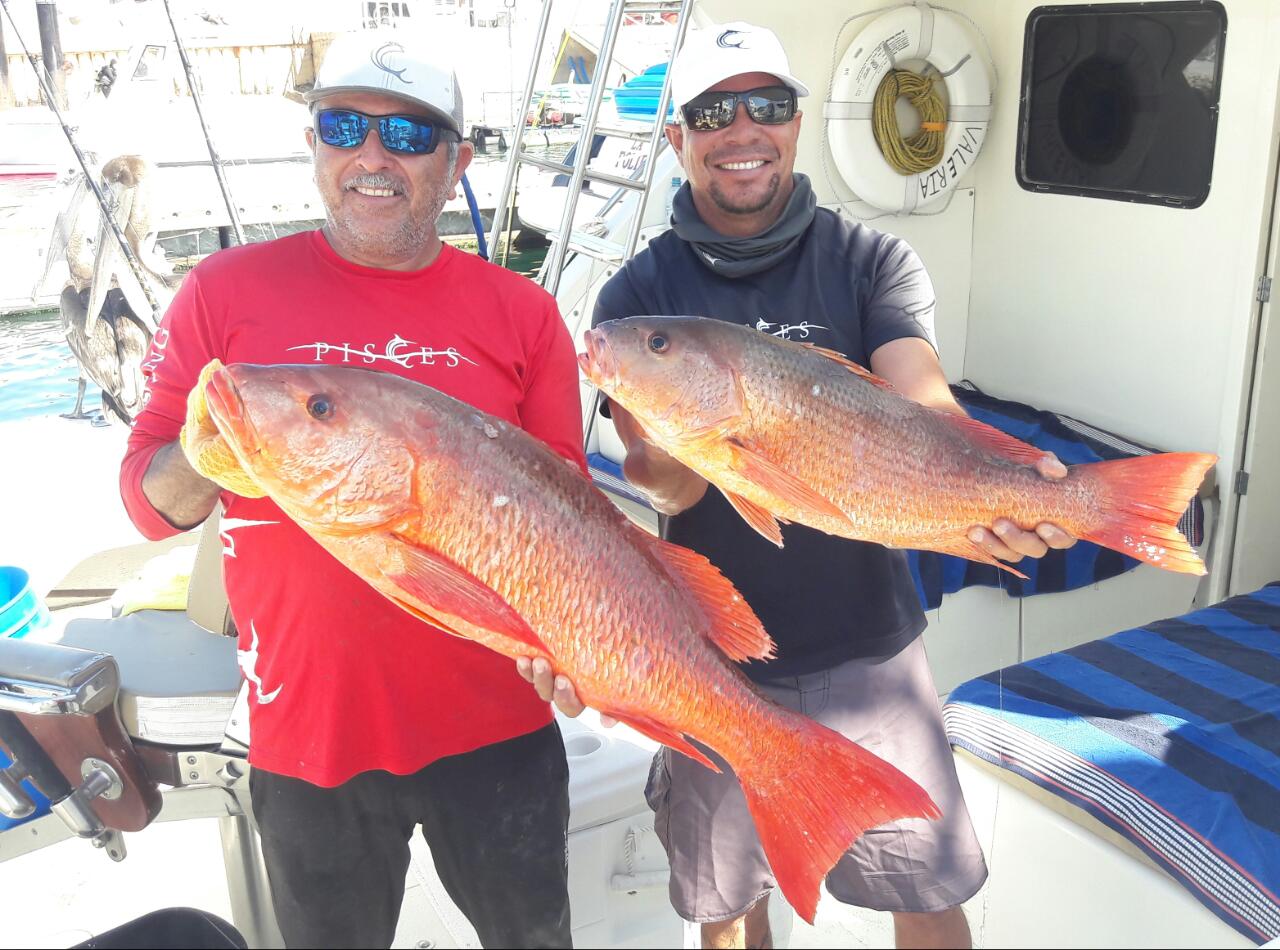 Panga fishing this week brought Sierra Mackerel and Jack Crevalle, Pisces 24′ Panga Anamar     and angler Steve Nordhus caught 3 sierra on hoochi lures by Solmar and 1 Jack Crevalle of about 15 lbs there too.

WEATHER CONDITIONS: Mostly overcast days and calm seas, with the exception of a few days where wind picked up slightly, making for some chop at sea.

Written by Rebecca Ehrenberg, Based on the Catches of Pisces Fleet.