Another great week of fishing in Cabo with a very nice surprise billfish appearance to close out the week! The striped marlin showed up in big numbers at Golden Gate, with up to 6 striped marlin caught and released per boat. Yellowfin tuna numbers also held steady this week, with a slight increase in tuna numbers caught per boat. Top boats caught up to 25 tuna per boat and the small game action continues to be good, with the majority of catches being of species like red snapper, yellowtail, amberjack, ladyfish and grouper. Still seeing a few mako sharks sprinkled into catches this week also. 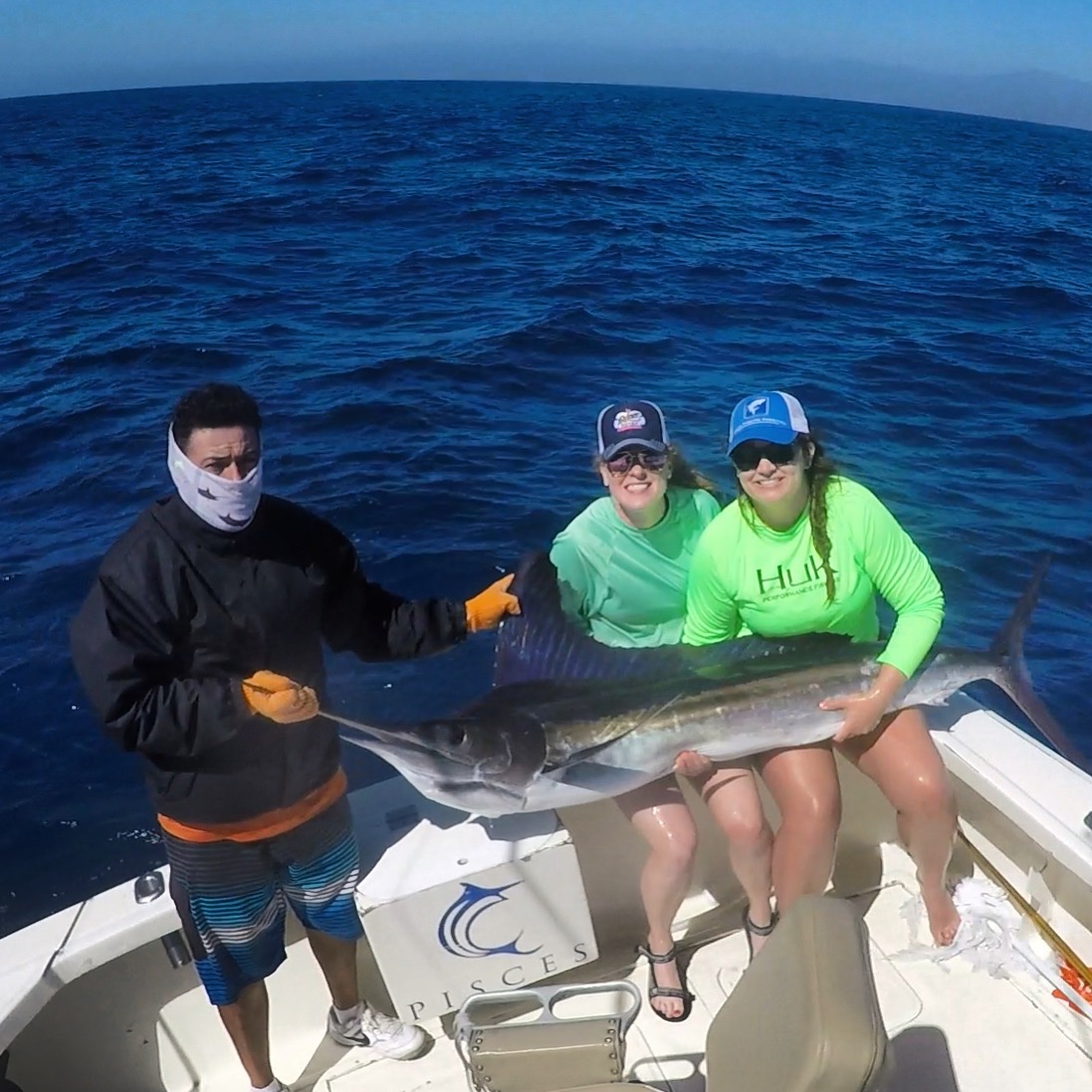 Anglers Collin Vails and Jillian Novosad with one of

Starting off our report this week with the marlin action with Pisces 31′ Tracy Ann taking the top spot over all boats with 6 striped marlin released in one day. March 29th was the most productive day this week for marlin with Canadian anglers  the Warmenven’s and Ingham’s on the Tracy Ann doing a great job releasing their marlin between 100 and 130 lbs each, which hit on mackerel bait at Golden Gate.

Pisces 31′ Ruthless also did well at Golden Gate this same day, releasing 5 striped marlin all between 100 and 120 lbs each approx, also on mackerel bait, this time for female anglers Collin Vails and Jillian Novosad from Texas, who also caught and released 2 mako sharks of about 30 to 40 lbs each, hitting on mackerel.

Pisces 35′ Valerie was also at Golden Gate this day, releasing 3 striped marlin, but of a slightly larger size. Each fish ranging from 140 to 150 lbs each, hitting on mackerel bait. And definitely one of the most action packed and diverse days out, was Pisces 31′ Rebecca this same day, who also headed to Golden Gate. Anglers Kayleigh Faye Simmons and Zachary Kinlaw did an awesome job of releasing 2 striped marlin successfully, of about 120 lbs each, which hit on mackerel bait, as well as the only 2 dorado of the week, which were between 10 and 12 lbs. As if this wasn’t enough, they then caught 1 mako shark of about 30 lbs which they released and 6 decent sized red snapper, of about 10 – 15 lbs each, these were caught at Los Arcos area. 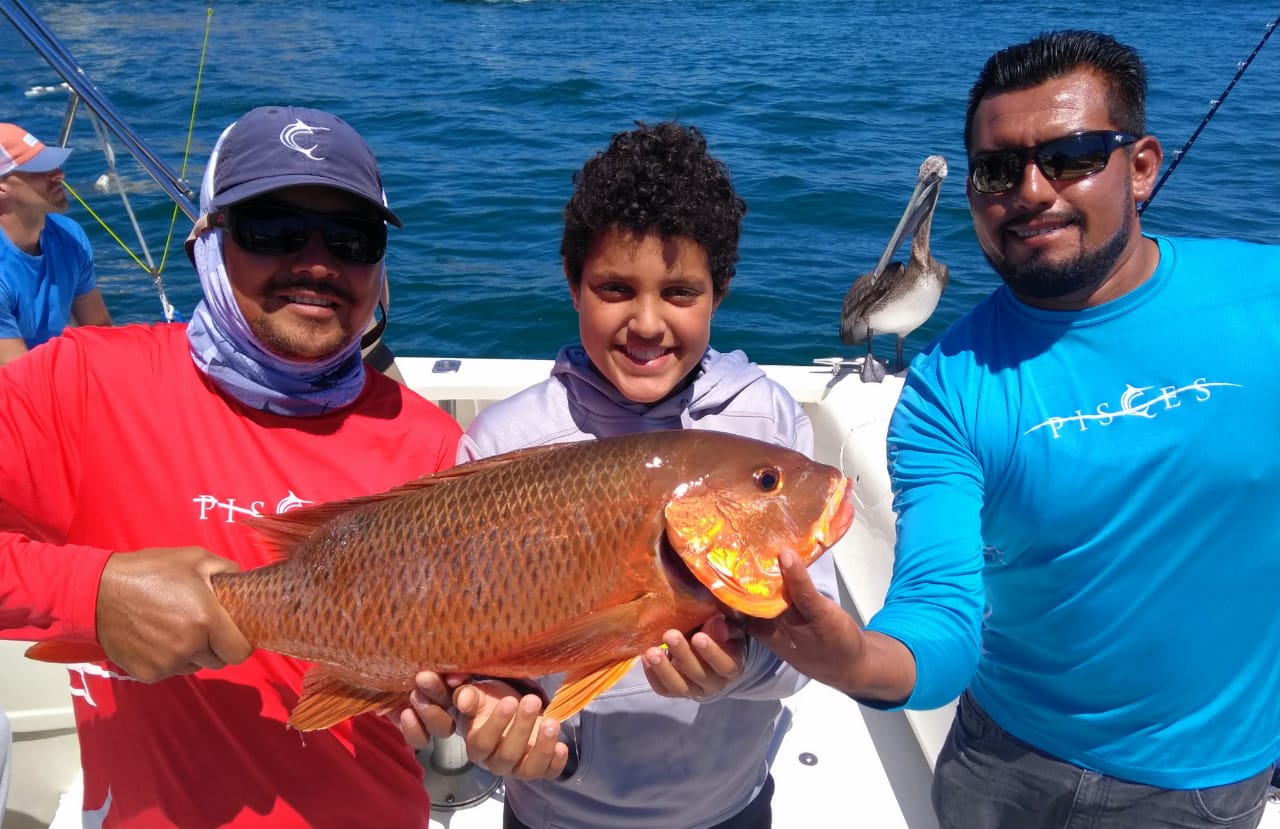 One of many Red Snapper caught on Pisces 31′ Rebecca

And a few days prior to this, the Rebecca released 5 striped marlin between 120 and 140 lbs each, which hit on mackerel at Golden Gate and again, headed to Los Arcos afterwards to land some eating fish, keeping 5 red snapper of about 15 lbs each. Anglers were Chad and Ruth Christensen from Montana.

The Pisces 42′ Yahoo had a similar approach beginning the week as well, when on March 24th they released 4 striped marlin at Golden Gate, weighing approx between 100 to 150 lbs each. Then they headed to San Cristobal area for small game, where they successfully landed 4 red snapper between 10 and 15 lbs each on Mackerel bait. Anglers were Tanya and Van Lafond from Delano, CA. 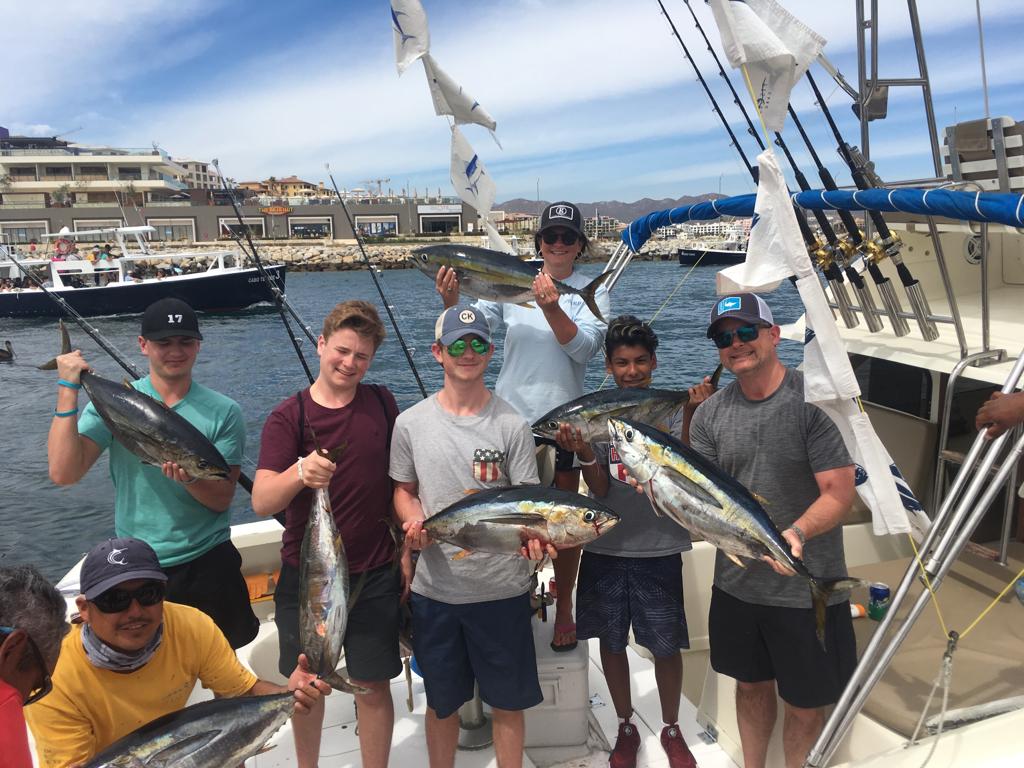 And as previously mentioned, we saw great tuna numb ers this week, for example, Pisces 31′ Rebecca impressed with 25 yellowfin tuna weighing between 15 and 20 lbs caught about 35 miles out, at the 230 Spot using feathers.

Pisces 31′ Tracy Ann did well this day too, 20 yellowfin between 10 and 20 lbs each, which hit on cedar plugs at San Jaime Bank, angled by Bob Keeney, Ivonne Devries and Pamela Jusufi from Michigan. Similarly, Pisces 31′ Ruthless and anglers from Virginia, caught 15 yellowfin tuna of about 20 lbs each, on cedar plugs at San Jaime as well. Pisces 32′ Bill Collector headed to the 210 Spot for Tuna and did well to find 20 yellowfin, which also hit on cedar plugs. Anglers from Tennessee also released a nice 140 lbs striped marlin about 4 miles South of San Jaime. 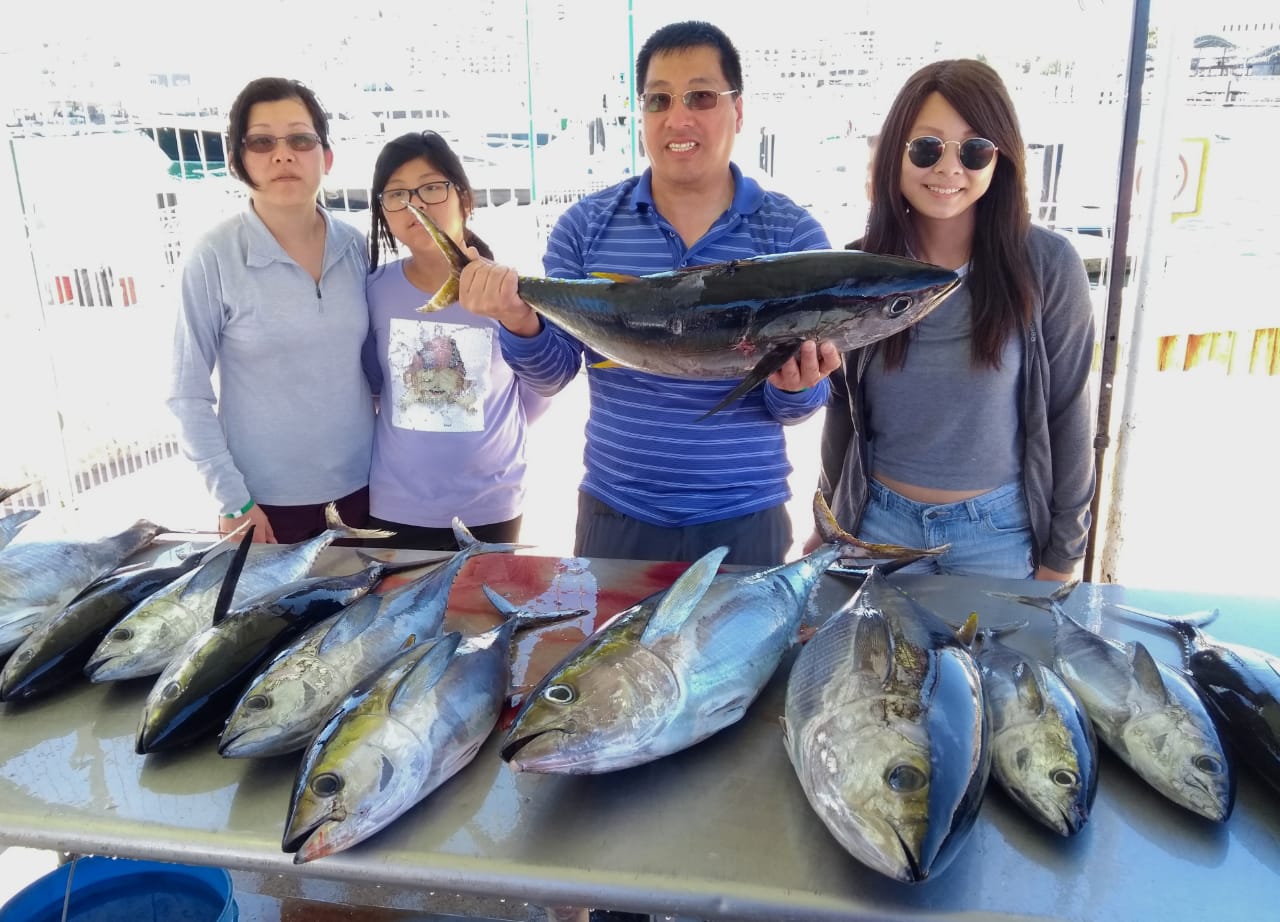 Pisces 28′ Andrea concentrated efforts on small game mostly this week, and on March 24th did well to catch 5 grouper, 1 ladyfish, 2 babosas and 3 red snapper by chumming at Migrino, along with 3 yellowtail between 10 and 20 lbs each, caught on mackerel. Anglers were the Fischers from Wisconsin.

Pisces 28′ Andrea concentrated efforts on small game mostly this week, and on March 24th did well to catch 5 grouper, 1 ladyfish, 2 babosas and 3 red snapper by chumming at Migrino, along with 3 yellowtail between 10 and 20 lbs each, caught on mackerel. Anglers were the Fischers from Wisconsin.