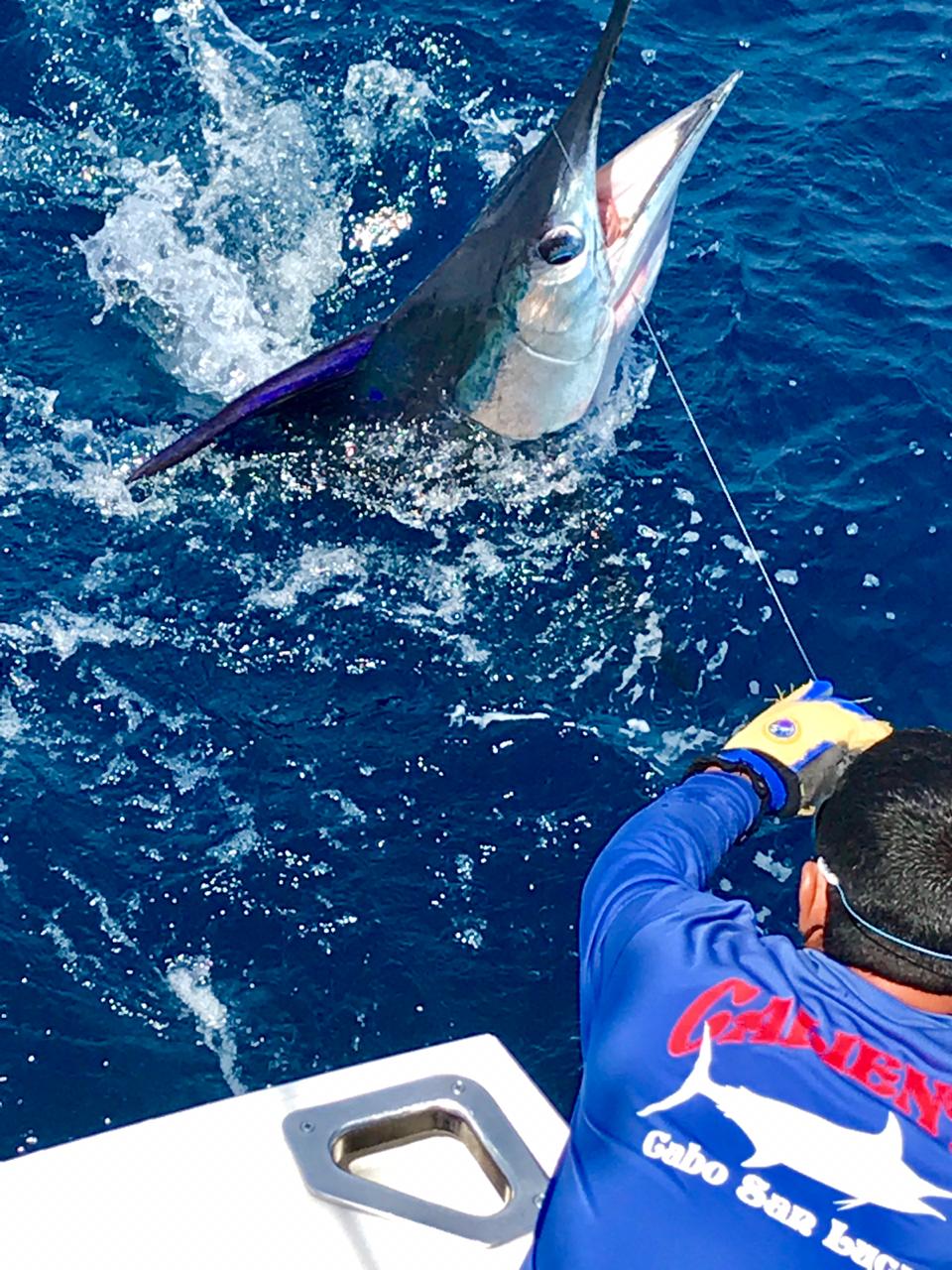 Marlin numbers this week in Cabo stayed pretty consistent compared to last week. With again, the top boat producing 6 striped marlin released in one day. “Other” Catches, referring to small game such as yellowtail, sierra mackerel, jack crevalle, grouper, red snapper and others, increased quite nicely and made for lots of fun, especially for many of our young anglers. Tuna numbers decreased, and only a few Dorado were found in this week as well.

Starting off the week strong, Pisces 72′ Tag Team caught and released 6 Striped marlin. all fish hit on mackerel bait at Golden Gate and weighed an approx 90 to 140 lbs each. Baby brother Pisces 37′ Tag Team III did well this week too, with 3 striped marlin released in the week, which ranged from 90 – 130 lbs each, caught at Golden Gate on mackerel. 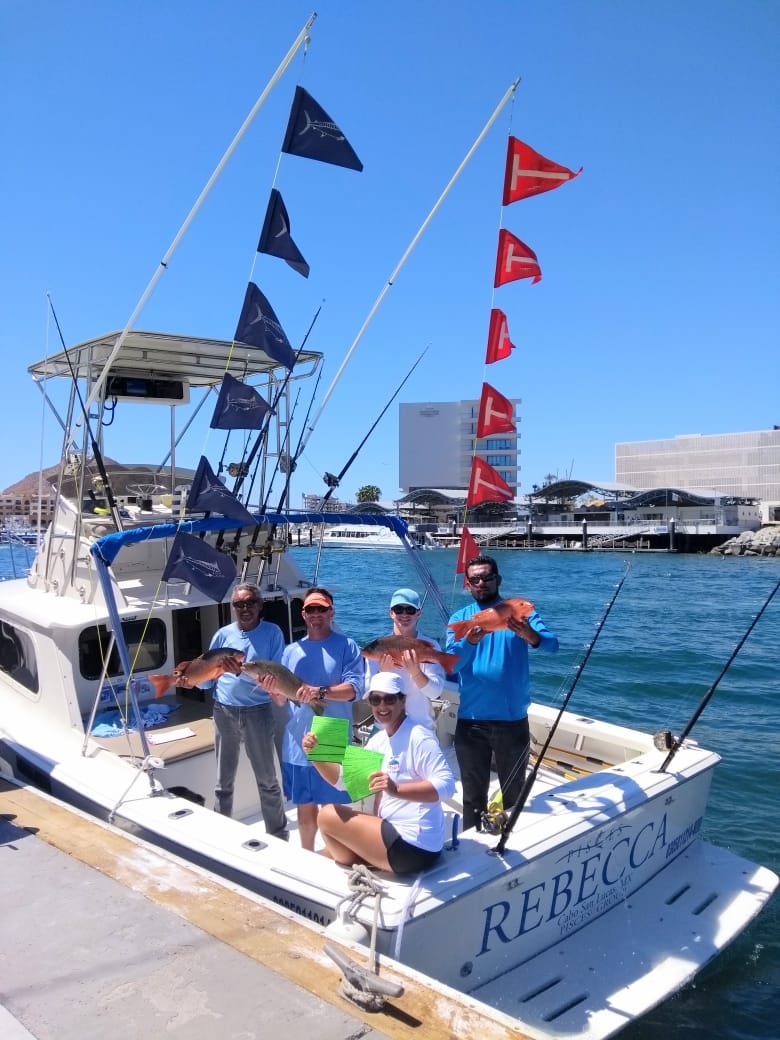 Jennifer and Rodney showing off their release flags and Tagging cards from GrayFish Tag Research for their catches.

The next day, Pisces 31′ Rebecca did just as well, with 6 striped marlin released at Golden Gate on mackerel bait, weighing slightly more each. Fish ranged from 120 to 180 lbs each. Anglers Jennifer and Rodney Davidson from Atlanta, Georgia, also landed 4 red snapper up to 20 lbs each, hitting on mackerel and sardines at Los Arcos area.

Pisces Rebecca, one of our top producing boats this week, also caught and released 3 striped marlin and 1 jack crevalle for anglers from Texas, again at Golden Gate on mackerel this week. The next day, they landed 2 red snapper of about 15 lbs, on mackerel at Los Arcos, for another group from Atlanta; anglers Johana Astrid, Ceshia Medina and Tim Evans who also released 2 striped marlin this same day, weighing about 120 lbs each, at Golden Gate. And to finish off the week, Rebecca did well again with the snapper, catching 7 at Golden Gate for Jerauld and Olivia from FL, who also released 1 striped marlin of about 120 lbs there. 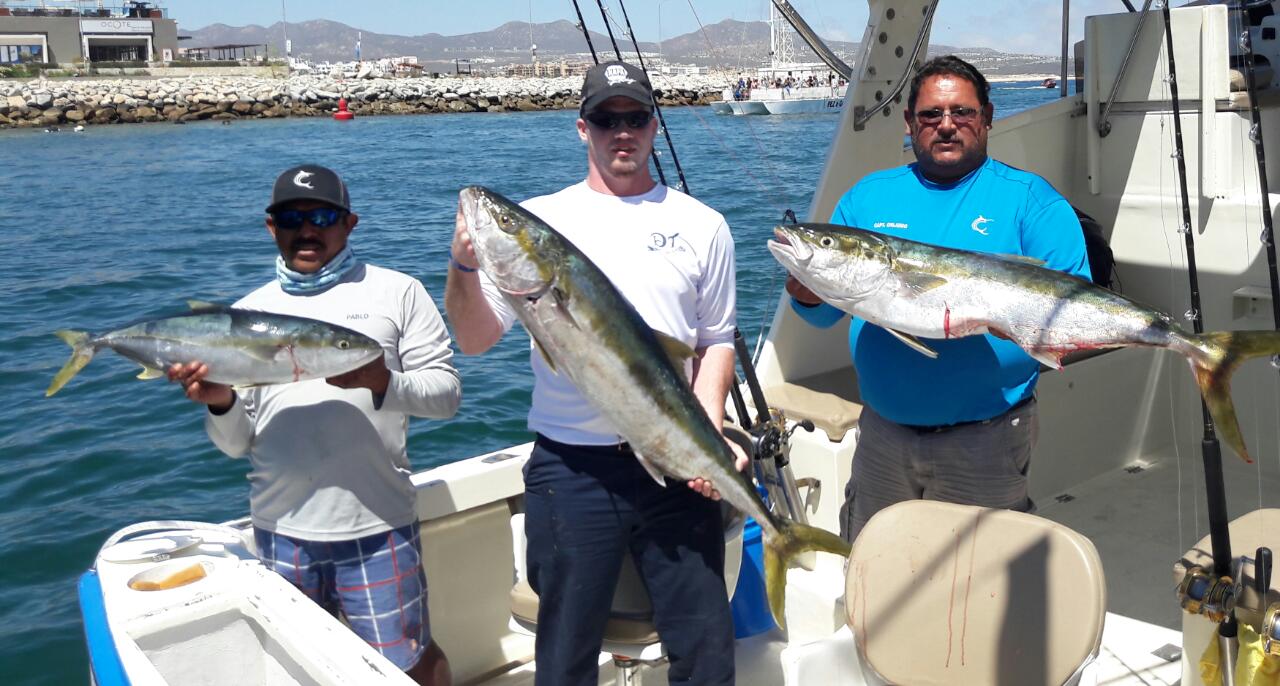 A great week for our 28 foot Uniflites this week too with Pisces 28′ Andrea releasing 1 striped marlin April 1st for the Nguyen family of anglers, as well as 4 mako sharks (all released). The shark hit on mackerel and sardines, as did the striped marlin; all at Golden Gate. A few days later Andrea would catch 3 very nice sized yellowtail, with the largest of about 30 lbs, which hit on caballito bait at Migrino. They also kept a nice grouper they got by chumming there.

Similarly, Pisces 28′ Adriana did well this day with 2 grouper of about 15 lbs caught on mackerel at Golden Gate and 3 red snapper, by chumming. Pisces 38′ C Rod opted for heading to Los Arcos in this same day, which paid off. Anglers the Leonettis and Kahanes (with many young anglers this day ranging from 8 to 11 years old) did a great job to land the following: 1 sierra mackerel, 1 amberjack, 1 jack crevasse of about 25 lbs, 10 pompano, and 7 bonitas all on mackerel and by chumming. Plus, 2 skipjack which hit on feather lures. 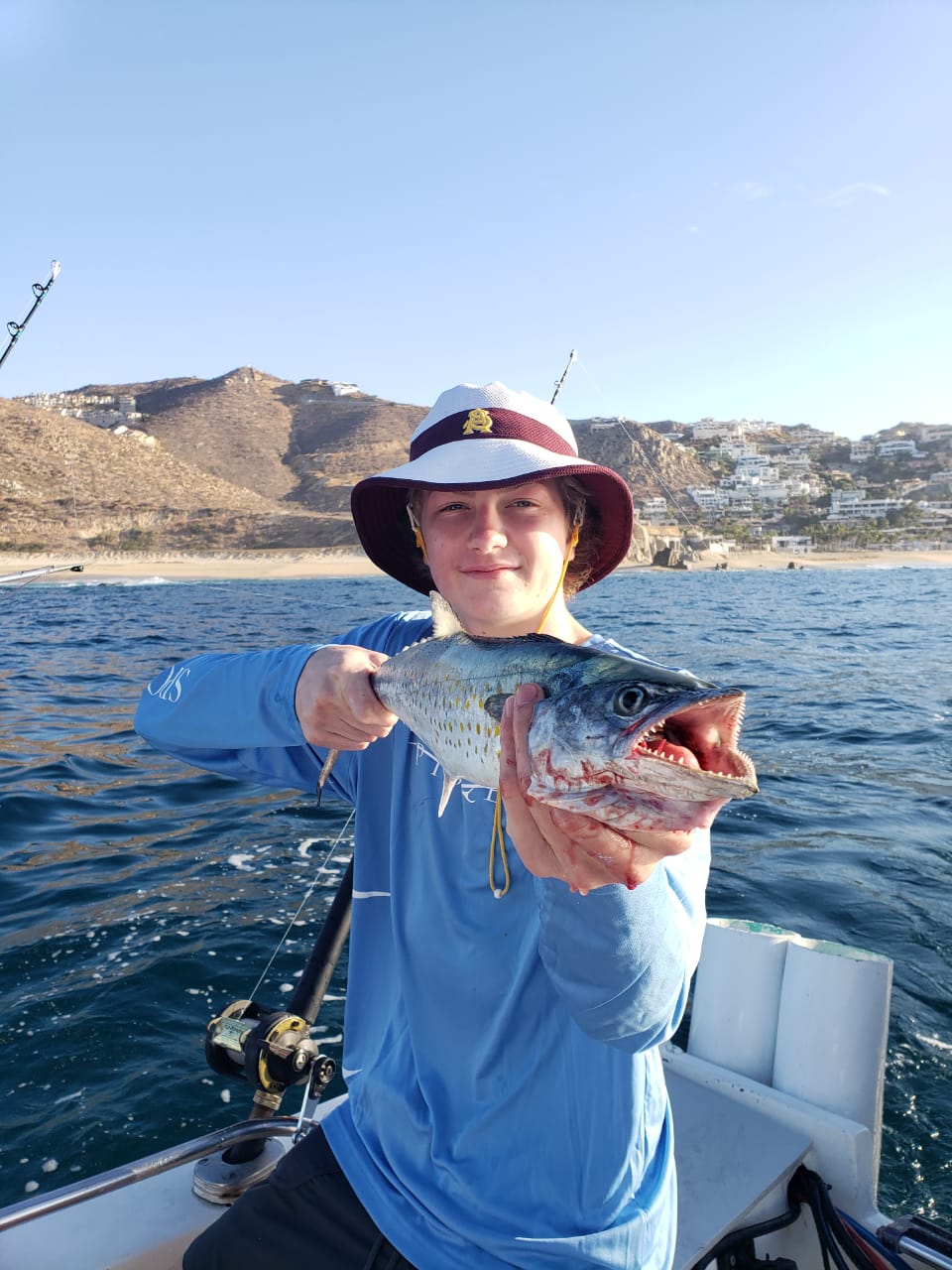 More sierra mackerel were caught to close out the week, April 5th on Pisces 24′ Panga Anamar with the Pratt family onboard catching five total all between 5 and 10 lbs at Balmaceda area on hoochies. And one of the only dorado caught this week was also on one of our Pangas, this time Pisces 25′ Panga Samantha, landing a 22 lbs dorado on caballito at Cabeza Ballena and one grouper by chumming at Barco Varado. 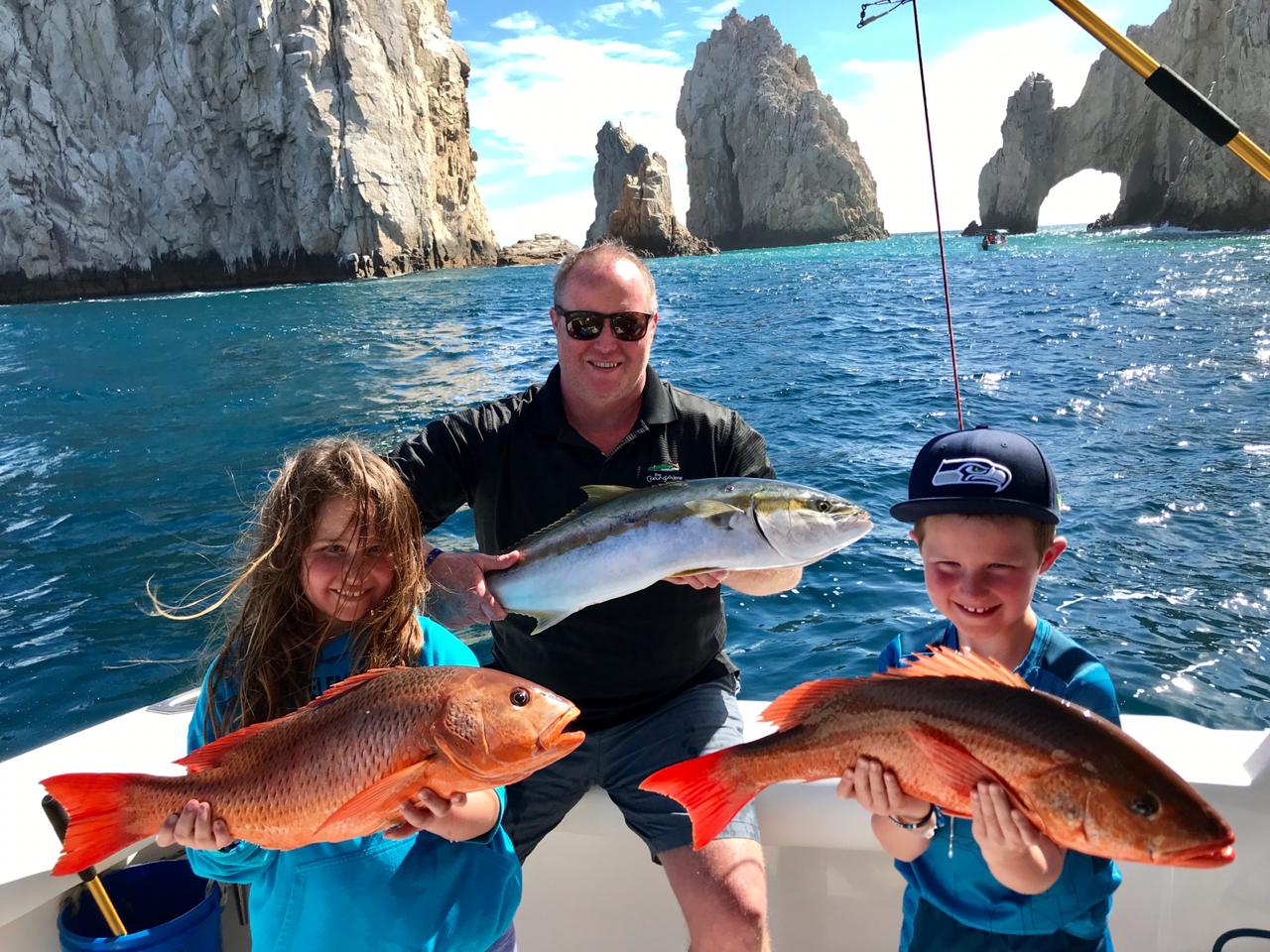 Last but definitely not least, Pisces 42′ Caliente and young angler Garret Flynn, who celebrated his 11th birthday aboard, had a action packed day with 4 jack crevalle released, 6 red snapper and one nice 22lbs yellowtail caught, along with 1 striped marlin who broke off in the end. Yellowtail was caught on mackerel at Migrino and the red snapper at Los Arcos, while the Stripey hit at Golden Gate.

Written by Rebecca Ehrenberg based on the catches of Pisces Sportfishing