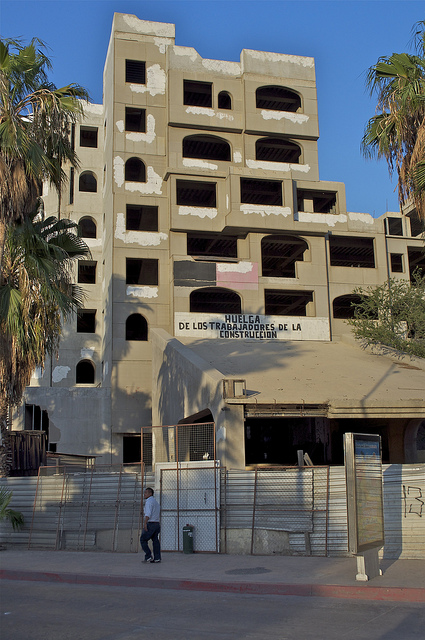 Grey ghost to be returned by union to S?nchez Navarro.  After 18 years presidente Pe?a Nieto intervenes in dispute.  Eye sore to be rebuild.

After 18 years of legal dispute, which caused that the hotel located in the center of Cabo San Lucas known among locals as “Grey ghost”, owned in part by Eduardo Sanchez Navarro, president of Grupo Questro, stopped its construction, the issue ended with the agreement between the Revolutionary Confederation of Workers and Farmers (Confederaci?n Revolucionaria de Obreros y Campesinos  or CROC) and the investors group.

Employer and representatives of the former employees adhered to the union, said the national leader of the group, Isa?as Gonz?lez Cuevas, managed to smooth things out so that this past Saturday Sanchez Navarro could take back the possession of the property.

“He has demonstrated his ownership, which was recognized in civil trial work where they give those rights,” said PRI senator.

The legislator admitted that the recovery will generate 180 direct jobs and 600 indirect jobs.

Initially, the project was started by Tersa Constructions, a company that ignored the needs of the collective contract for construction workers, he said.  Then, the investor took the responsibility for the problem that was generated at the hotel.

The litigations followed for years.  To finish with visits to the courts, and repeated federal protections, Sanchez Navarro and Gonzalez Cuevas talked about the issue with the purpose to end the confrontation.

In the covenant between them, he noted that the CROC will be benefited by the construction and operation contract.  The federal government had to intervene to end this conflict.