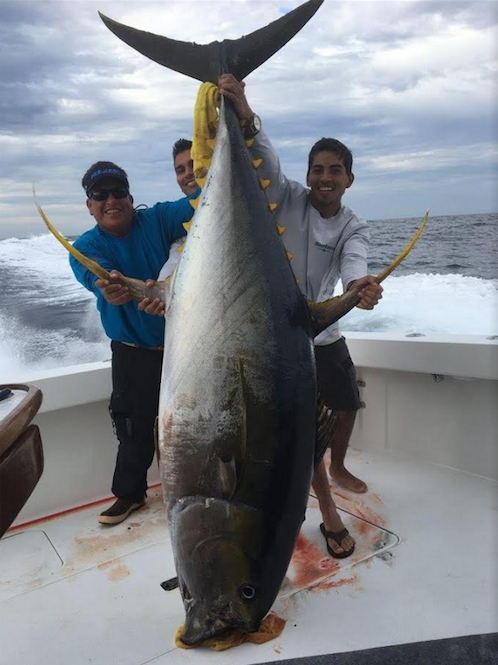 Yesterday took us all by surprise; we got a call late in the day, when offices were closing, from somebody at the dock saying that a massive tuna, perhaps a record, had been brought in aboard the 65 FT Viking, “Santana”.  We rushed down to the scale to verify the information and saw what indeed a huge tuna was hanging up. This boat had their own electronic scale, but needed to charge it, which gave us time to chat. We spoke with Jesse Santana who owns the boat and was fishing with his three sons, Jesse Jr.,  Joseph and Jacob. It was twenty one year old Joseph who had hooked the fish. They had headed out towards the Finger Bank and were after marlin, the boys were on the bow casting live mackerel as the frigate birds dove, indicating the presence of feeding fish.  They saw what they thought for a second was a marlin tail and then Josephs bait was taken and the fight was on.  After about twenty minutes they realized they were not fighting a marlin, but a tuna and the marlin tail they had seen was actually the long signature fin of a very large tuna.  Joseph did an admirable job, using a Shimano Talica 25 with 100 LB spectra and 130 LB monofilament line and managed to get the beast to the boat in just 45 mins after fighting the fish standup – no fighting chair required for this accomplished angler; quite an achievement for a slender young man who only weighs 158 LBS himself. The fish ended up more than twice the weight of the angler at 335 LBS and had a fork length of 83 inches and girth of 58 inches. The Santana family is from Riverside, California, dad Jesse explained how he got his sons into fishing as a healthy activity and a way to spend quality time together. The boys have been fishing since they were toddlers. 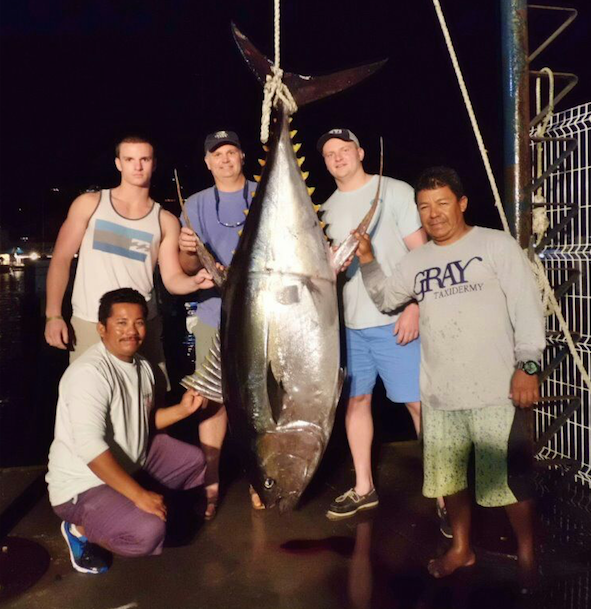 As if this wasn’t enough we got a call from Pisces dockmaster Oscar, to say Pisces Bill Collector was coming in late and had a really big tuna. Captain Juan told us that he had also gone looking for marlin near the Finger Banks with the Crespi family from Michigan on board. Chris his wife and two sons in their 20’s headed up the Pacific in search of billfish activity. They saw frigate birds diving and saw tuna but didn’t get a bit until noon, when an enormous tuna took a live mackerel on tackle precisely for this kind of fish 150 LB spectra leader and 80 LB line. After an hour and 40 mins the fish was suddenly gone. Disappointed would be an understatement, but the game crew decided to give it another try. Captain Julio said it was an amazing site to see his boat surrounded by monster tuna, 30 or 40 fish all in the 200 to 300 LB class. They put out another tuna rig and one for marlin and got hit twenty minutes later but this time on the marlin tackle which was 100 LB fluorocarbon leader with only 40 lb. line, nevertheless luck was on their side and they managed to get the fish to the boat, where they struggled to boat it for ten minutes between crew and anglers and just in time, the circle hook, intended for releasing fish, broke as they pulled it on board. It was well after dark when then got back to the marina and the fish was not weighed, however the fork length was 84 inches and the girth 52 inches, putting it right up there with the 335 LB brought in 40 minutes earlier. 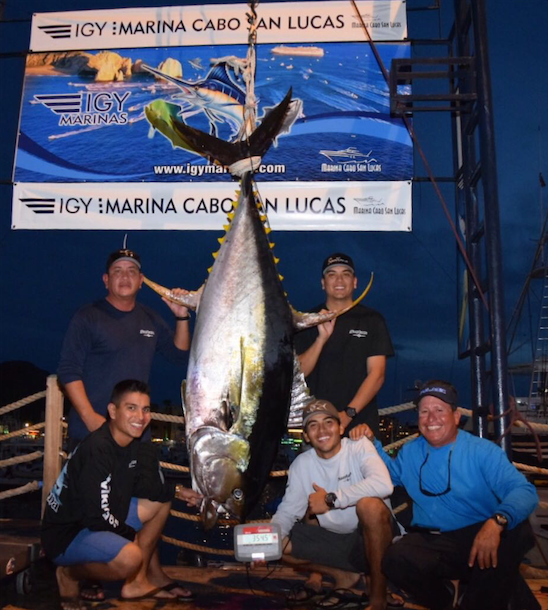 But, wait there’s more…somebody then sent us a photo of a third huge tuna, this time caught aboard Mucho Bueno estimated to be 275 to 300 LBS followed by yet another tuna, caught aboard El Regalo that was in the same category.

We have NEVER seen such a day in the history of Cabo where sportfishing boats have brought in so many tuna of this size.

Just goes to show, Cabo is the place to be..sushi anybody?