Yesterday afternoon we heard that a big fish would be coming in, caught aboard a local charter boat “Mucho Loco”.  The rumor through the grapevine was that it might be close to a thousand pounds, but there was some skepticism as to whether it was true.  By dark the boat had not arrived and most people forgot about it and went home.  We got a call around 9.00 pm from a friend saying that a big fish was being weighed on the main scale right in the thick of the pedestrian area.  We rushed over there to see a massive blue marlin hanging up and were approached by Captain Bernabe Ruiz who had caught the fish aboard his boat “Bad Medicine” a 35 ft. Cabot. 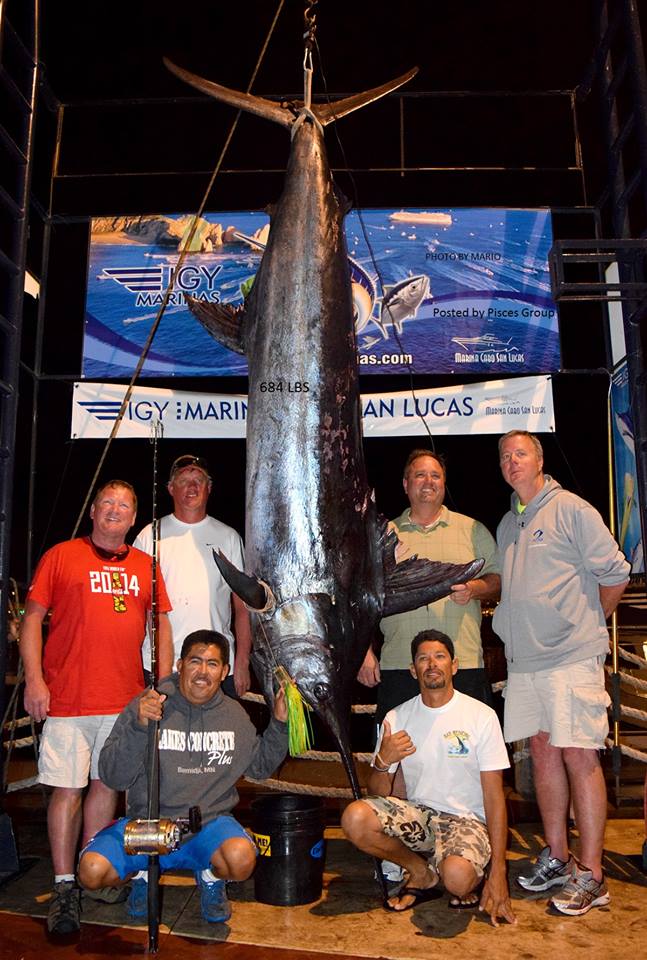 We assumed the information we had received was incorrect and we had been given the wrong boat name.   Captain Bernabe, known as “Lobito” (little wolf), told us that the fish weighed 684 lbs., but we noticed that the bill was resting on the ground; the scale frame simply wasn’t big enough, but then again the fish was thirteen and a half feet long – so our guess is that it actually weighed more, easily over 700 lbs.  Captain Bernabe told us that he had been fishing at Golden Gate on the Pacific when at 10.15 am he spotted the massive fish eating a dorado on the surface.   He acted fast pulling out a big dorado colored lure and attached it to his 80 lb. test rig, raced over to the fish and dropped the lure in front of it, which it pounced upon.  They got a solid hook-up and the battle was on for the four men on board.  The fish was extremely strong, so strong in fact that it took them 9 hours and 40 minutes to subdue after taking turns at the rod.   Back at the docks the anglers, were dazed and sunburnt but ecstatic – their relieved wives met them to congratulate them (they were supposed to have been back from fishing at 3.00 pm).  The first angler we spoke to was Kevin Lautt from  West Fargo in North Dakota, the 52 year old Coca Cola sales rep was giddy with excitement;  he told us “this is my first time in Cabo and my first time deep sea fishing – the biggest fish I’ve caught is a 15 lb. northern pike”.   The other anglers were John Priggi from Windsor, Colorado, Mitch McKaig from Moorhead, Minnesota and Raymond Johnson, a beet farmer, from Glyndon, Minnesota.  Ray told us that he comes to Cabo regularly and that the group had all been friends for over 20 years – all of the guys had helped him out on the farm and he said “I am thrilled that this lifetime fishing achievement could be shared with my friends”. 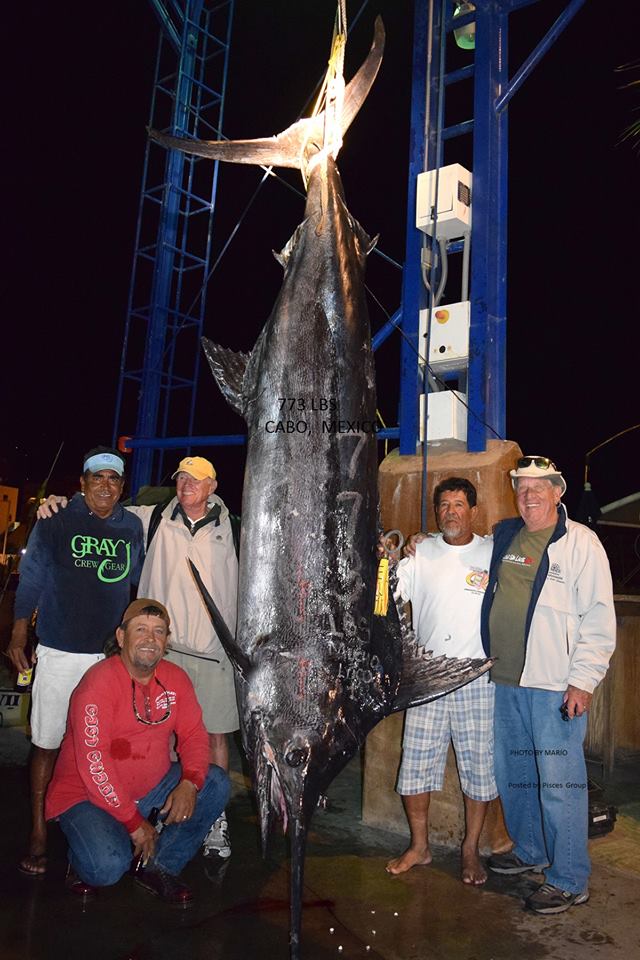 At this time we wondered where local photographer Mario was, strange that he wasn’t there snapping pictures or writing up the taxidermy order.  We gave him a call and he said he was on the other side of the marina at the other scale, with the big fish.  We thought what big fish; we are standing right next to it.  He told us that Mucho Loco the boat we had originally heard about had finally shown up, two men aged 74 and 79 and hooked a very big blue marlin around five miles out from the Old Lighthouse, also on a lure.  The old timers, obviously in great physical shape brought the fish to the boat in five hours.  This fish however, was even bigger at 773 lbs., also a blue marlin.  The fish was filleted and shared by all the crews, families and friends who were very thankful to receive such a gift.  We were unable to interview the anglers but will follow up with more information when we have it.  There is always a tinge of sadness to see these magnificent creatures on the dock and not in the ocean, but this is great news for Cabo San Lucas, helping the town hold its position as one of the top fishing destinations in the world.  A lot of families still being affected economically from the hurricane will have plenty of quality food for weeks to come and the anglers will have memories to last a lifetime.