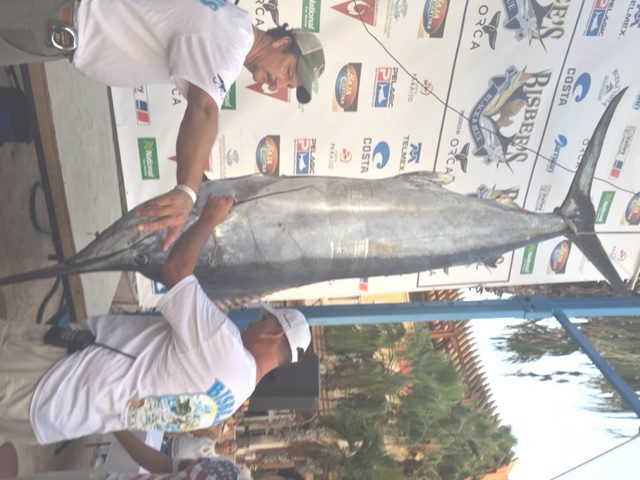 Bisbee Offshore Tournament took place this weekend with $773,000 in prize money up for grabs by a field of 108 teams. The two day event always takes place the weekend before the main event, Bisbee Black and Blue, and has always been known as the “little Bisbee”, but it can hardly be called that any longer.  This is a good tournament to fish as the entry fees are less than the main event, lots of boats entering, the purses are getting bigger every year and with dorado and tuna categories, there is a good chance of placing. Of course this year there were many fish tales; we heard today, ofand saw a photo of a 700 LB marlin caught at La Playita aboarda a 26 FT panga. Our very own 31 FT Rebecca was not booked for the tournament but with regular clients they managed to release four blue marlin today, with the largest around 400 LBS plus two striped marlin..would definitely have won some big bucks.  It was nice to see another one of our 31 ft boats come to the scale in the tournament tonight, with a yellowfin tuna at a respectable 171 LB tuna, that didn’t win any prizes but was a nice catch aboard Tracy Ann .

It was interesting to note that Pangalisa who won the Los Cabos Billfish Tournament two days ago, were able to bring another qualifier to the scale, a 311 LB black marlin, which will not make it into the top three sports, but nevertheless is a great achievement…they fight all their fish stand up.

Top Tuna was a 224 LB  fish aboard North Star, though we did see a  large one at 283 LBS come to the scale, it is unclear at this stage if this fish was disqualified or if the scoreboard just has not been updated as of the writing of this report.

Dorado prize went to Sea Fever for a 32.4 LB fish