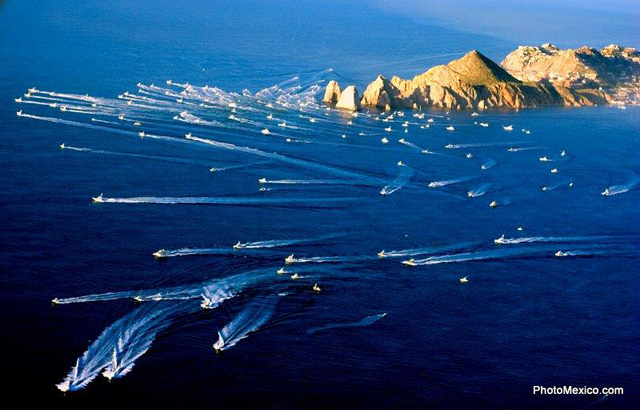 The Los Cabos Billfish Tournament is a three-day big-fish team event with honors going to the team that tallies the most points per pound – prize money goes to the top three teams. A trophy and a smaller cash prize is awarded to the boat releasing the most billfish.  The 2012 event was won with a 487lb black marlin that swept the daily jackpots, levels one thru three.  Total winnings for team Bill Collector was $167,877.50 along with an invitation to the 2013 IGFA Offshore World Championship to be held in May in beautiful Quepos, Costa Rica.

The second of three Bisbee events in southern Baja, the Los Cabos Offshore tournament takes place a few days prior to the multi-million dollar Black and Blue.  Many teams that fish the big one fish this as well – it’s the prefect “pre-fishing” opportunity.  In 2013, the tourney attracted 80 teams and 466 anglers with nearly $500,000 in prize money up for grabs.  The team aboard Chupacabra came away with top honors for their 583lb blue marlin and a check for $206,973.  Second place went to Sneak Attack with a 565lb blue for $189,837.

The big daddy of the them all has paid out big over it’s 30+ year history…. two checks come to mind.  In 2006 team Bad Company took it all with a check for over $3.9 Million.  In 2012, team Frantic Pace did the same to the tune of nearly $2.5 Million.  Sure, risking over $60,000 to enter across the board stings, but I bet hoisting a check as big as those takes the pain away quick!  Now, you don’t need to enter across the board, base entry fee is $5,000 and that can still make for a big payday.

Los Cabos is the best value in fishing with world record sized tuna, wahoo, dorado and marlin a real possibility anytime you wet a line in her waters. The Los Cabos Big Game Charter Boat Classic is a unique tournament created to add excitement to your day fishing on a Los Cabos Charter Boat. The angler entry is FREE to anyone fishing on a Los Cabos Charter Boat with a guaranteed $40,000 in total cash plus lots of great prizes. Anglers can enter to fish any or all of the fishing days with $10,000 up for grabs each day. Make your reservations early and enjoy what is probably the best time to be in Los Cabos for great weather and fantastic fishing!