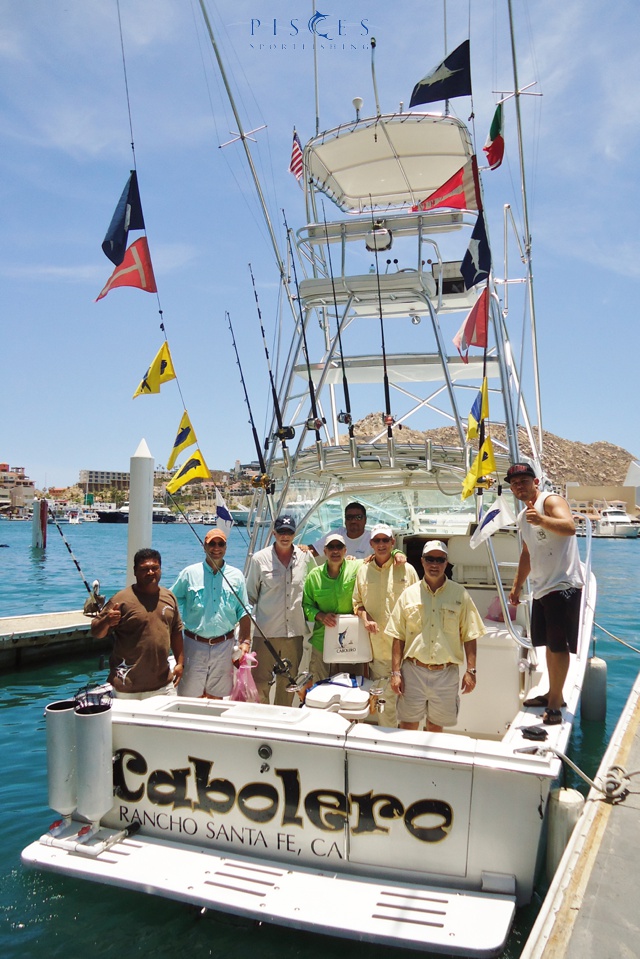 Brian, Chris, Ed, Scott and Tom from Florida and Georgia were the lucky anglers aboard our 31 ft Cabolero, who caught (and released) 2 striped marlins, 6 dorados and 2 yellowin tunas, all in one fishing trip.

BILLFISH: Wow what an
incredible week; fishing was hot with multiple catches of blue &
striped marlin as well as sailfish.  The week culminated in the Stars
and Stripes tournament, a fun, well run event, which raised over two
million dollars for charity. One of our top boats was Pisces Listo
which on June 27th released ten striped marlin & a 300 lb. blue
marlin for team SoCal anglers during the Stars & Stripes event.
Samantha Everhardt from Texas released a 320 lb. blue marlin, which
took her just an hour and 15 minutes to subdue, whilst her companion
Kyle, released a striped marlin  around 120 lbs.; both fish were caught
at Destiladeras aboard Pisces Rebecca.
Blue marlin are a definite goal for anglers that have been fishing
Cabo for years and have released striped marlin, but these bigger fish
are more elusive and fewer and farther between, this week though we had
first time anglers as well as repeat clients that were able to get a
blue.  Jen, Brad & Mark Hoffman from Gainesville, Florida had a blue
marlin that took them four hours to fight to the boat before releasing
the approximately 300 lb. fish – they also released a striped marlin
aboard Pisces Andrea.  Rick Walsh, long time Pisces angler was able to release a blue marlin close to 250 lbs. aboard Rebecca also at Destiladeras.  Ruthless, Speedwell & Cabolero
each released a blue marlin in the 200 to 250 lb. class on July 2nd
with lures of various colors the trick to getting a hook up.   Deddi
& Eddie West from North Carolina were some of the only anglers that
went to the Pacific side; Captain Julio guided them to San Jaime aboard Tracy Ann where they released six striped marlin & boated a wahoo.  La Brisa
had a super busy day Tom Ginn & friends on June 29th, they took up a
huge space on our fish report with three striped marlin, a sailfish,
two pilot sharks, two yellowfin tuna and four skipjacks.  Remember the
hotter the weather the hotter the fishing.  Pisces anglers caught a
total of 71 billfish, consisting of 54 striped marlin, 8 blue marlin and
9 sailfish released.

OTHER SPECIES:  There were some good yellowfin tuna
catches with some boats able to catch up to 24 in a day, mostly of
school size but there were also some sizeable ones, such as 155 lb’er
caught aboard Shambala by Tampa, Florida anglers who also released two striped marlin.  This same day Bill Collector
landed a 147 lb. tuna for Mark Chiavetta, the largest of fourteen
caught by this group, as well a striped marlin release.  The pilot
sharks don’t seem to want to leave as they are still mixed in with the
striped marlin and we had ten released this week.  Dorado catches were
on the slow side with just a few caught here and there.  We did have
some nice roosterfish, such as a 45 lb. fish caught aboard Pisces Valerie;
these anglers lucked out as they also caught seven dorado and eleven
skipjack.  Jack crevalle, amberjack & skipjacks rounded out the rest
of the catches.