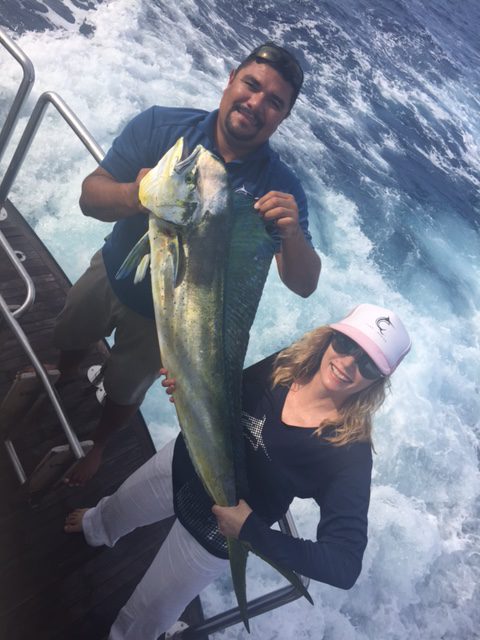 Sometimes you just have to get out on the water and not sit behind the desk, true this past weekend for Tracy Ehrenberg of Pisces Sportfishing who enjoyed a day out aboard Contessa our 82 Ft Yacht which provides comfort and can catch fish too. “We saw fish right off of Solmar beach, hundreds of small yellowfin tuna, jumping like bait, thick in the water but no takers.  Next we saw five humpback whales in a small pod, then on to Gaspareno, where marlin were present. We had one hook up, but the fish came of. We were tempted by a school of tuna, clearly visible about half a mile away so headed over. Greeted by hundreds of dolphins, we took a couple of sweeps around the edge of the school but no luck. We headed back to where the marlin were and had fun following the tip offs given by the diving birds and managed to hook a feisty striper around 110 LBS, which was successfully tagged and released ten minutes later. Then heading back towards home, we spotted another three whales and hooked a nice dorado on a pink lure.  Pretty good size for a female at around 32 LBS. What an incredible place we live in; we saw hundreds of creatures from tuna, to marlin, whales, dolphins and birds. It’s nice to remember why we live here”.