I came across a fantastic review of golfing in Cabo by James Ward, published in Luxury Travel Magazine, and wanted to share it with you, as it depicts our lovely home as it really is: a true golfer’s paradise.   Mr. Ward gives an overview of each Los Cabos golf course, its size, views, benefits 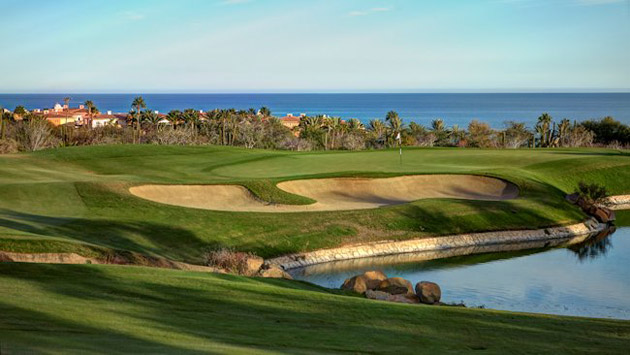 Located at the far southern tip of Mexico’s Baja Sur – Cabo San Lucas has been calling visitors to its sun-drenched shores for many years.  Hollywood types – from John Wayne to Bing Crosby – routinely flocked here.  Close enough to home – yet far enough away from prying eyes and probing paparazzi – Cabo’s lure has always been its stunning landscape.  Mere words alone cannot do justice to what mere mortals may visit but never recreate elsewhere.  Bracketed by the Sea of Cortez and the Pacific Ocean within a coastal mountain desert climate, Cabo provides a mesmerizing contrast with nearly 350 days of sunshine.

The most iconic symbol is The Arch at Land’s End – where the Sea of Cortez collides with the Pacific Ocean.  A must see landmark when visiting.  In the winter season whales migrate via the Pacific and the awesome scene of the annual pilgrimage leaves a lasting memory.  World renowned fishing is also here too for those wishing to land a prized marlin at the end of their fishing reel.

During the go-go period of golf course construction in the 1990’s – Cabo’s address was among the world’s hot spots and international attention accelerated.  In 1992, Palmilla golf course opened – the first Jack Nicklaus design in Latin America. The original 18-hole layout – Mountain & Arroyo – expanded in 1997 with the Ocean nine. 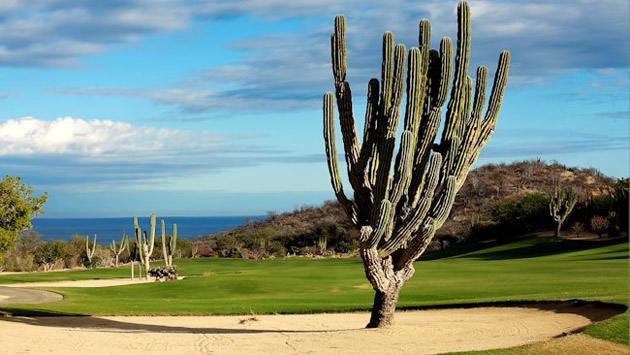 One year later – Robert Trent Jones, Jr. designed Cabo Real – the layout smartly blends two distinct nines – the outward half uses the higher terrain of the desert – the inner side working toward and eventually away from the Sea of Cortez.

Cabo Real is part of Questro Golf and has several other golf properties in its portfolio.  Club Campestre San Jose opened in 2007 as did Puerto Los Cabos.  Club Campestre, located off the toll road from the airport, is another Nicklaus design and is quite playable with severe greens in spots – most notably the vexing short par-4 5th. Nicklaus smartly added several risk and reward type holes and while playable the course is anything but a pushover.

Puerto Los Cabos, several miles removed from the main roadway, is located at the base of the Sierra de la Laguna Mountains – the gateway between San Jose del Cabo and the refreshing atmosphere of Los Cabos’ rugged and unspoiled East Cape coast line.  The private community opened in 2008 and features 18-holes – the front nine from Greg Norman / Mission and the inner half from Nicklaus / Marina. Eventually, the existing 18 will become 36 holes with each designer completing their individual layouts.  The lone downside?  Each course begins with a long uphill slog hole which is truly a no-no for any layout where resort play is commonplace.  Be sure to check out the vista from the elevated championship tee at the par-3 6th – no less than 10 miles of coastline come into view.

The Nicklaus course that got the ball rolling came in May of 1994 at Cabo del Sol. The Ocean Course here starts off with nary a clue on what awaits. Like a good book the qualities emerge slowly and build to a tour de force climax.  At the long par-4 5th you tee off high above the fairway – the Sea of Cortez a glistening backdrop. Two par-3’s come in succession. Each is well-crafted and works well in the overall routing.  The inner half follows the same pattern as the outward nine.  You play away from the Sea of Cortez and then head back for the stunning conclusion.  The phrase “must play” is often bandied about mindlessly – it resonates accurately at The Ocean Course.  I’ve had the opportunity to play 70+ “signature” Nicklaus designs – The Ocean Course at Cabo del Sol easily makes my personal top ten.  In December of 2001 – Tom Weiskopf added a second 18 called The Desert Course. There’s lesser terrain variety here but far from inferior shotmaking is called upon.

Four years later Nicklaus designed El Dorado.  The layout works up and down from desert terrain to the Sea of Cortez and is much more than just rudimentary golf.  In 2004 El Dorado became a private club but access from select hotels is doable.

Much of the original focus for golf in the greater Cabo area came on the Sea of Cortez side.  That changed in 2009 with the captivating Diamante facility – located five miles northwest of Cabo San Lucas.  Whereas golf along the Sea of Cortez is usually calm – whipping winds and major club differentials can be maddening along the Pacific coast.  Diamante Dunes is an 18-hole layout by Davis Love III, PGA Tour star and 2012 American Ryder Cup Captain.  Work is in motion for a second course – El Cardonal – set to open in 2014 and will be the first design from the world’s number one player – Tiger Woods.

The course is planned as par-71 layout with a maximum length of 7,301 yards. A 3rd course – patterned after the Shadow Creek Las Vegas model of being private and available only to property owners and their guests – is also planned.  While not as rugged as those on the classic links in Scotland and Ireland – the dunes at Diamante Dunes are massive.  With environmental regulations stringent in the States – the courses here on the Pacific side may be the last true haven for such an epic co-mingling.  Paspalum is the grass surface of choice at Diamante and while environmentally sound and cost effective – can be “sticky” at times. Getting the surface sufficiently firm and fast in order to get the ball to roll along the ground in combatting the howling winds is a must. In time optimum results may happen. We shall see.

Tucked away from Highway 1 is Querencia – which translates from Spanish as a “place where one feels at home.”  The current ownership has pushed all the right buttons to make sure that happens.  In 2000, Tom Fazio designed his first course in Mexico. Cabo’s first private golf club – Querencia is located on 1,800 acres with 320 for the golf course.  Working off 350 elevation of change – one never feels excessive climbing when playing.  The holes follow a typical Fazio presentation style – sound position – not careless brute strength – is Fazio’s calling card here.  The holes are smartly segregated away from interfering housing and the two-mile ride from the highway to the clubhouse provides a great escape for your time there.  Access to Querencia is no sure thing when visiting – but inquiries through a few of the key hotels may work out opportunities to play this most attractive layout.

There is no bad time to visit Cabo – summer months can produce storms from time to time.  Winter and early spring months provide the ideal mix of sunny days and cool nights.  Cabo San Lucas is the ideal vacation intersection for the golf connoisseur and those desiring a meaningful getaway to rejuvenate body and soul.

What’s ahead for Cabo?

Plans call for a 2nd 18 at Querencia with architect Gil Hanse – the man designing the golf course for the 2016 Summer Olympics – at the helm.  Just down the street from Diamante is Quivira Los Cabos – a 36-hole design by Jack Nicklaus.  A planned 2014 opening is slated but previous announcements have stalled – word on the street is that this layout may be a match for The Ocean Course at Cabo del Sol with more holes ocean side than any other layout in the immediate region.