A year after being battered by a hurricane, the Baja hot spot is buzzing again. A guide to the best places to eat, drink and stay

Original Article by By Sarah Gold

When I first fell for for Los Cabos-the resort area that stretches for about 20 miles between the towns of Cabo San Lucas and San Jos? del Cabo on the southern tip of Mexico’s Baja peninsula-it was for all the usual reasons. Like the region’s iridescent quality of light and dramatic topography; the way its narrow blade of desert shears off to the Pacific on one side and to the Sea of Cortez on the other. The hotels didn’t hurt, either-luxurious, bougainvillea-draped villas and palm-thatched compounds that line up along the shore like so many beauty-pageant contestants. 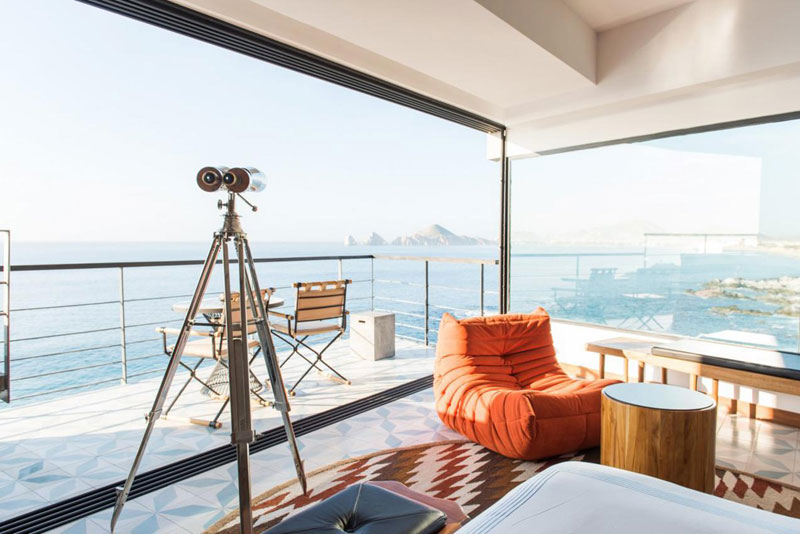 A room at the new Cape hotel – Credit: Allie Foraker for The Wall Street Journal

But as I’ve returned frequently over the years, for long-weekend getaways with my husband or for solo surfing excursions, I found more meaningful reasons to like the place: Even though it welcomes more than 1.5 million visitors a year, Los Cabos still has a small-town heart. It’s the only resort destination I’ve ever visited where a taxi driver once invited me for dinner with his family and where the host of a fancy restaurant once crouched at my table to draw me a map to his favorite local surf break on a napkin.

In September 2014, Hurricane Odile made landfall in southern Baja. The storm’s 125-mph winds hammered Los Cabos for six hours, crushing thousands of homes, downing utility poles, leaving 90% of the residents without running water and ravaging the beaches and hotels.
Most of the hotels had reopened by late this past summer, so I checked into one of my favorites, the One&Only Palmilla, in San Jos? del Cabo, which had sustained some of the worst damage in the area.

“It was like a war zone after Odile,” the hotel’s managing director, Peter Bowling, said. “Roofs were destroyed, windows were blown out, buildings were flooded and trees were down everywhere. Our entire beach washed away.”

A meal at One&Only Palmilla Photo: Allie Foraker for The Wall Street Journal
It was hard to imagine such devastation as we sat in the sleek dining room of Seared, the hotel’s new Jean-Georges Vongerichten steakhouse, where enormous windows framed a view of a pristine-looking slice of beach (which bulldozers had worked for weeks to restore after the storm)-or as I relaxed in my villa’s palm-shaded gardens that appeared to have been blooming for years.

Mr. Bowling told me that every part of the property had been either thoroughly revamped or completely rebuilt with the help of the Mexican and state governments, which sent thousands of cleanup workers to Los Cabos after the hurricane.

Other resorts I visited had bounced back in similar ways.

Odile had left the lobby of the Hilton Los Cabos Beach & Golf Resort swamped in debris and broken glass, its guest rooms flooded and its lawns and pools littered with uprooted palm trees. But strolling its colonnaded walkway, past the entrance to its redesigned spa, you see no hint of the storm.

“Everybody just came together and worked hard,” the Hilton’s marketing manager Gabriela van der Lee said. “As soon as they had made sure their families were safe, staff just arrived and started cleaning up.” Many Los Cabos hotels, including the Hilton, One&Only and Las Ventanas al Paraiso, kept their staffs on full salary during the months of recovery.

At Las Ventanas, in San Jos? del Cabo, staff spent the nearly nine months between the storm and the reopening replacing thatched roofs and landscaping the decimated grounds, as well as learning skills that would help them prepare the property for another hurricane. For example, teams were taught how to disassemble and safely store the property’s large collection of local artwork, including painted murals, bronze sculptures and glass candelabras.

“We do drills now,” said manager Hector Serrato. “We can have everything back in place within a day.”

I also checked on some of my favorite beaches along the Sea of Cortez, including Punta Palmilla (where the sea is so salty I felt as though I could sit atop its surface) and Playa Santa Maria, a marine sanctuary where the flotillas of tropical fish seemed none the worse for wear after Odile. At Playa Acapulquito, where I took surf lessons a few years ago, local and visiting wave riders are still out in force.

On my last day, I stopped at the Cape, a new Cabo San Lucas hotel whose stark, modern architecture, surfboard racks and young, artfully tousled guests reminded me of Malibu.
A visit to its glassed-in mescal bar helped put me at ease among the hipster clientele; so did plates of grilled octopus and sesame-crusted tuna meatballs at the restaurant, Manta. But the moment when I truly felt at home came just as I was leaving, and paused on the deck to watch a handful of surfers at the Monuments break just offshore.

“You surf?” a voice from behind me asked. I turned to see one of the hotel’s desk clerks, an amiable-looking young guy with spiky hair, who’d wandered over from his post.

“You gotta get out there,” he said. “You gotta come back.” 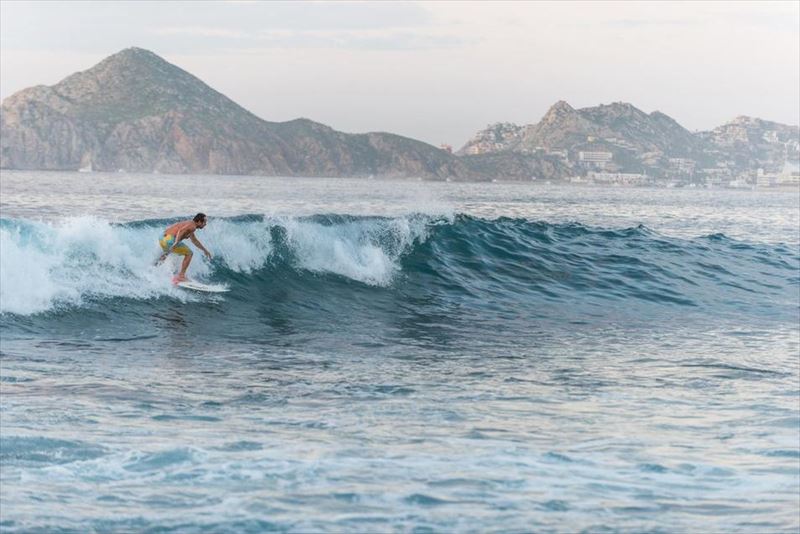 Making the Most of Resilient Los Cabos 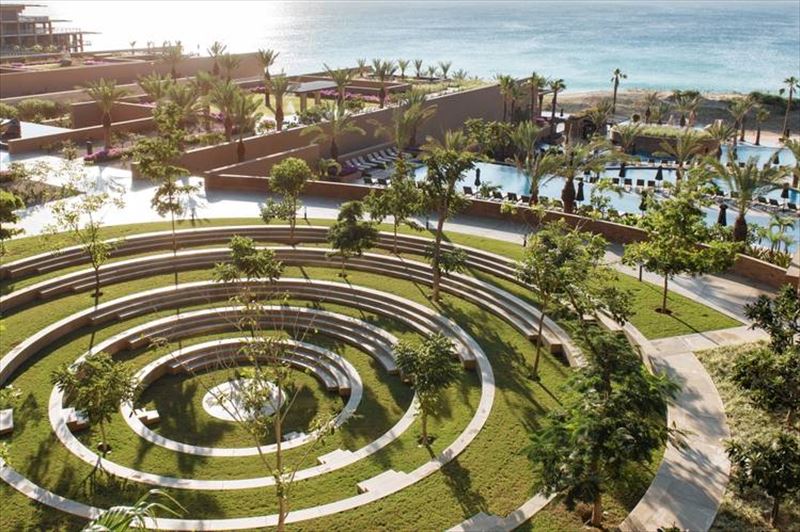 Staying There: For old-world Los Cabos glamour, it’s hard to top the One&Only Palmilla, whose vast spa, pools and 173 completely redesigned suites and villas are a favorite of celebrities (and those who pretend not to gawk at them around the pool). Each guest is assigned a butler who takes care of even tiniest details-like matching a room’s sewing kit to the clothes hanging in the guest’s closet (from about $525 a night; palmilla.oneandonlyresorts.com). The boutique-sized Las Ventanas al Paraiso also embraces a luxurious-yet-traditional aesthetic with its 83 beach-front suites and villas; art lovers will appreciate its substantial collection of local works and its on-site gallery and craft shops (from about $770 a night; rosewoodhotels.com). Grand-looking but affordable, the sprawling, 375-room Hilton Los Cabos Beach & Golf Resort is a favorite for wedding parties and business travelers. It’s adjacent to five different golf courses (from about $260 a night with a four-night minimum stay; www.hiltonloscabos.com). Surfers who appreciate both easy wave access and urbane high style will like the Cape, but only if they’re ready to splurge. All 161 of the So Cal-themed rooms and suites-plus a separate “surfer villa” for groups-are steps from Monuments, a top local shore break (from about $680 a night; thompsonhotels.com). The 299-room JW Marriott Los Cabos is a great spot for families. The just-opened property is set around 12 terrace-stepped pools and has facilities and programs geared to kids of all ages (from $460 per night; marriott.com). 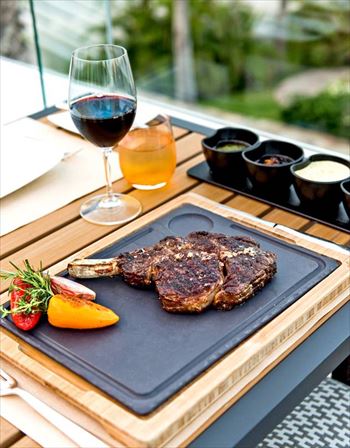 Eating There: For fresh seafood in a cliff-side setting where waves crash just below the outdoor tables, try El Farallon, at the Resort at Pedregal (theresortatpedregal.com). Part of a 10-acre organic farm and market, Flora’s Field Kitchen serves casually elegant farm-to-table cuisine using ingredients harvested on-property (brunch is a specialty here; flora-farms.com). Some of the area’s best ceviche and tacos can be found at El Marinero Borracho (“The Drunken Sailor”), an unassuming-looking and affordable spot set along the harbor in Puerto Los Cabos (ohnicnic.wix.com/the-drunken-sailor).