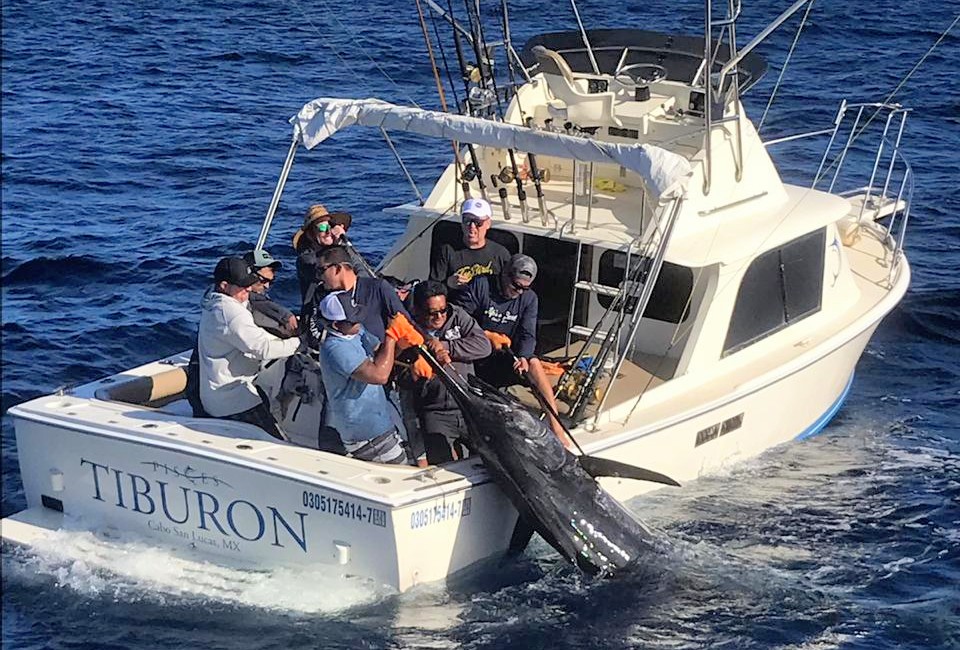 Unsuccessful attempts at getting the big blue marlin into the boat

Anglers on board of the Pisces 31′ Tiburon were about to call it a day when a marlin hit their trolled lures; It hit so quickly that they didn’t even get a good look at it, and during the fight they estimated it at about 300 lbs. Boy where they wrong.

Captain Rosendo Gomez, who has been with the fleet for almost 20 years now, had done an excellent job so far in landing the anglers the fish they were looking for, Yellowfin Tuna; 7 of which lay in the boat freezer already. Fishing has been fairly inconsistent and slow this week, so finding the anglers their tuna had been hard work and they were happy to have accomplished it. Not only this, but the 7 tuna had all hit at the same time, 15 miles out, close to the 180 Spot and were all successfully boated. This in itself was quite the accomplishment. Anglers Dennis Poudel, the V.P of Top Shelf Disc Supply, who organized the trip for his clients aboard: Mark Molnar, Sam Ferrans and Curtis Paul from California, were content with their catch and ready to head to the dock. Captain Rosendo then suggested to troll on their way back in for some marlin.

Thirty minutes later, out of nowhere, the trolled ballyhoo was slammed by a marlin at lightning speed and not even two seconds after, the green lure was also swallowed. The line with the ballyhoo went on to break as it spooled the angler, but the battle continued as each angler took turns at the reel, until they tired. They soon came to realize that their first estimate of this fish was way, way off.

The novice anglers exhausted themselves and gave it their all before passing the reel, and like this, four and a half hours went by. Despite Captain Rosendo and Mate Salvador “Chava” Flores’ best efforts, this was not going to get any easier. They were rigged for smaller tuna and striped marlin and had the fish on a Penn International 50 reel with 200 LB leader. Chava assisted the anglers the best he could and even fought the fish for quite some time, and it was then he realized, after they had already been fighting it for a grueling 4 and a half hours, that he fish had died. The job got tougher, as now they had to work the dead weight at the end of the line. Still, the anglers and crew were not giving up. Two more hours passed until the fish was finally brought alongside the boat, but there was no way it would fit on the swim-step and being a standard 31′ Bertram, it had no transom door to slide the fish into the cockpit. 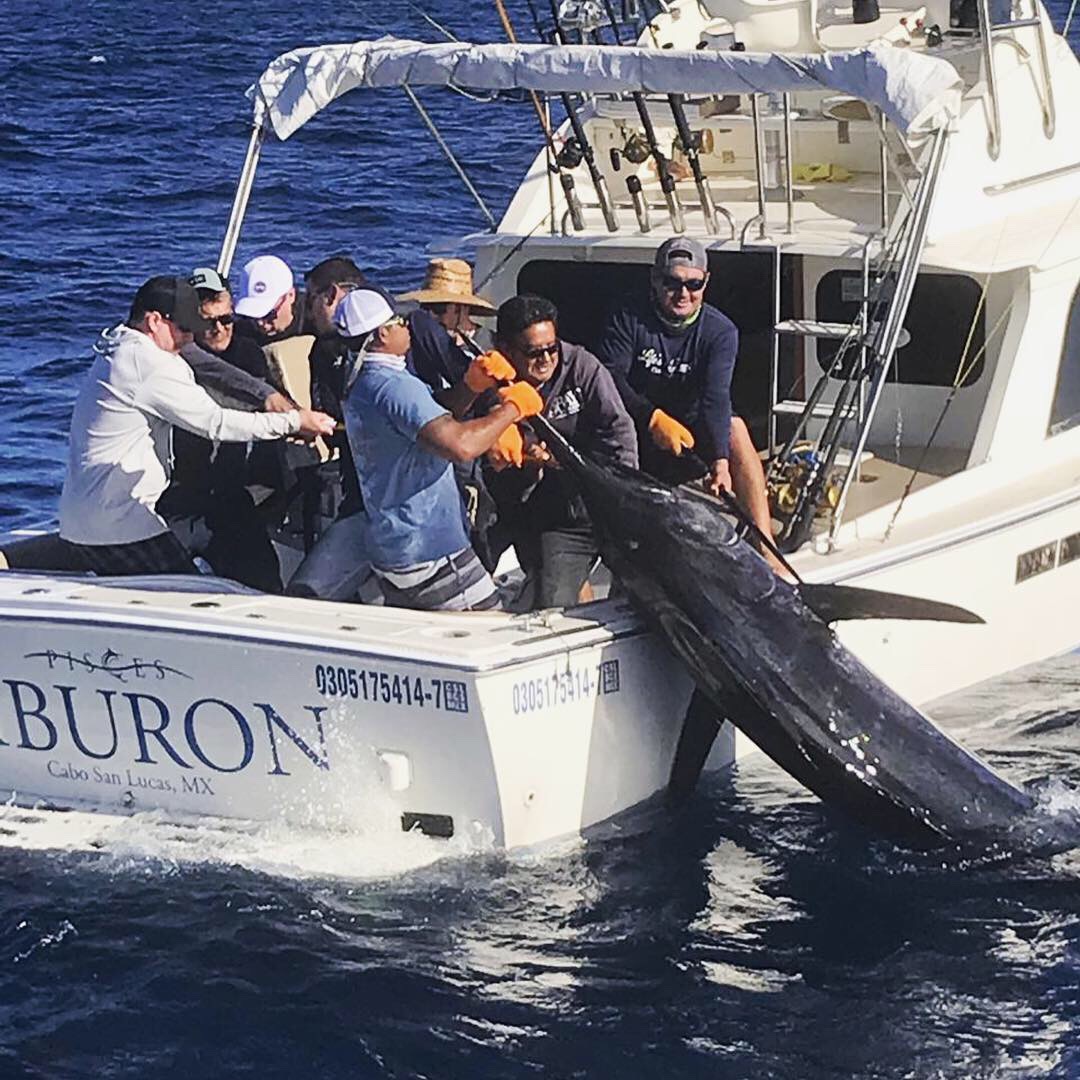 Not even 9 men were able to get the monster fish into the 31′ Bertram, Tiburon.

Captain Rosendo communicated to Pisces dockmasters ashore who dispatched help by way of the Pisces 31′ La Brisa and her crew. Even with all this manpower of four anglers and four additional crew it was impossible to hoist the monster fish, that had grown in estimation every hour, into the boat. Just then “Reels N Dirt” a beautiful 66′ Viking and the latest addition to the Pisces Fleet came cruising by, and noticed that help was needed. The crew, owner and guests aboard (a group of veterans), loaded the monster fish through the transom door into the large cockpit, which couldn’t contain the fish, leaving its tail sticking out the back. Shortly afterwards the fish arrived at port and a sizeable crowd gathered, as word of the fish reached the town. 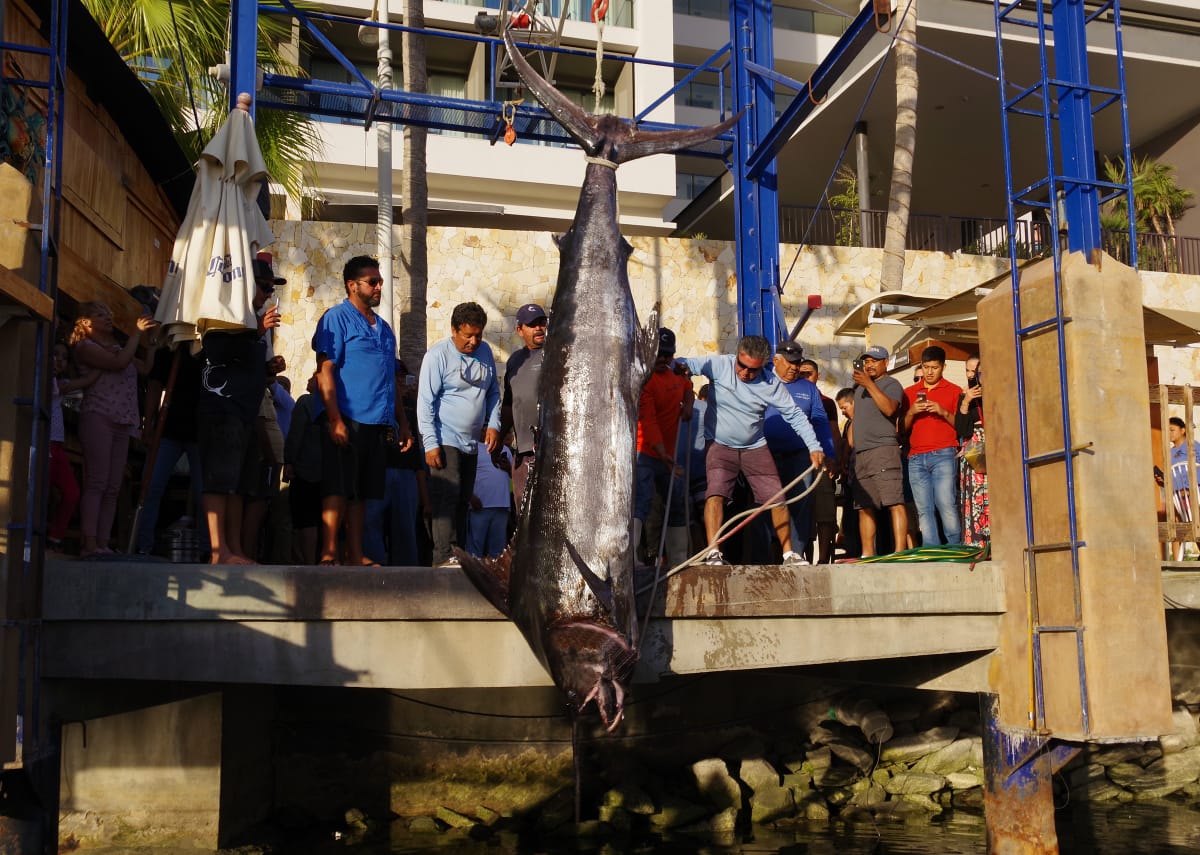 The blue marlin being hoisted to the scales at dock.

A rope was tied around the tail and it was dropped into the water at the Marina Fundadores dock.  Once the winch was attached, and the fish was being raised out of the water a 30 lb. dorado dropped out as well as the fish’s stomach. The blue was pulled up as the electric winch strained and then, burned out, but not before the scale registered 814 LBS, making it the largest fish we’ve seen in many years in Cabo. Just think, last year’s Bisbees Black & Blue Tournament’s winning marlin was 510 lbs (300 lbs less or 344 lbs less if you add that dorado back in!) and earned the winning team $3 Million Dollars. This blue on the Tiburon  measured 167.5″ long overall,  and had a 66″ girth.

Amongst the buzz and excitement at the dock, Tracy Ehrenberg talked to the anglers, who even though they had spent twelve hours at sea, and six hours of hard work, were looking fresh and happy, with beers in hand. When asked about the experience, Angler Mark Molnar was most impressed by the crew and the team effort of all involved, especially the other boats and crew coming to aid them, saying:  “Everything was top shelf. The hospitality we’ve received has been amazing and the crew stopped at nothing to achieve the objective and we will never forget that”.  Curtis Paul said it was a day of firsts for him, which he will never forget, “first time we have hooked one fish on two lines, first time we have had seven tuna on at one time, first time reinforcements were sent, first time we caught an 814 lb. fish”.

All in all, a great day for the crew, anglers and Pisces Sportfishing. Keep in mind that the very biggest fish are often caught “out of season” the current record of 1,070 LBS was caught in April of 26 years ago. 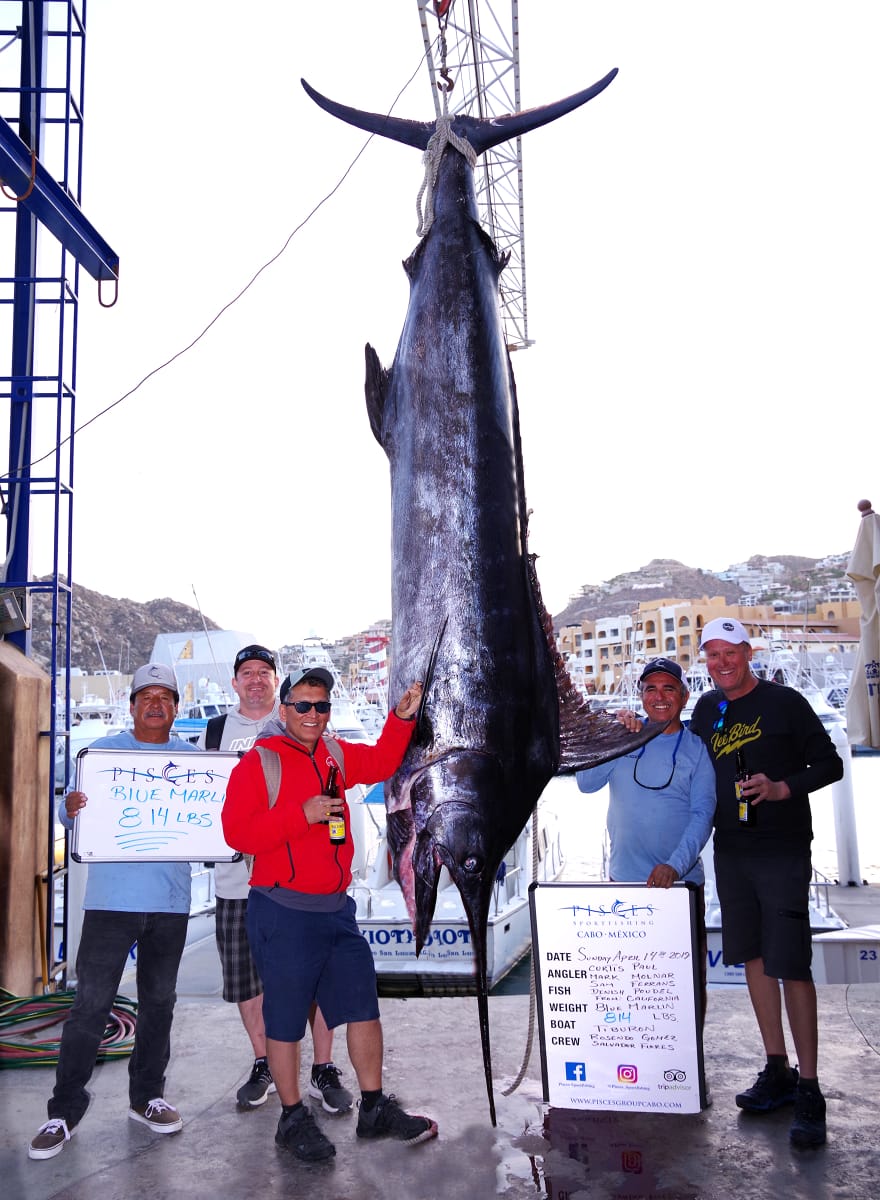 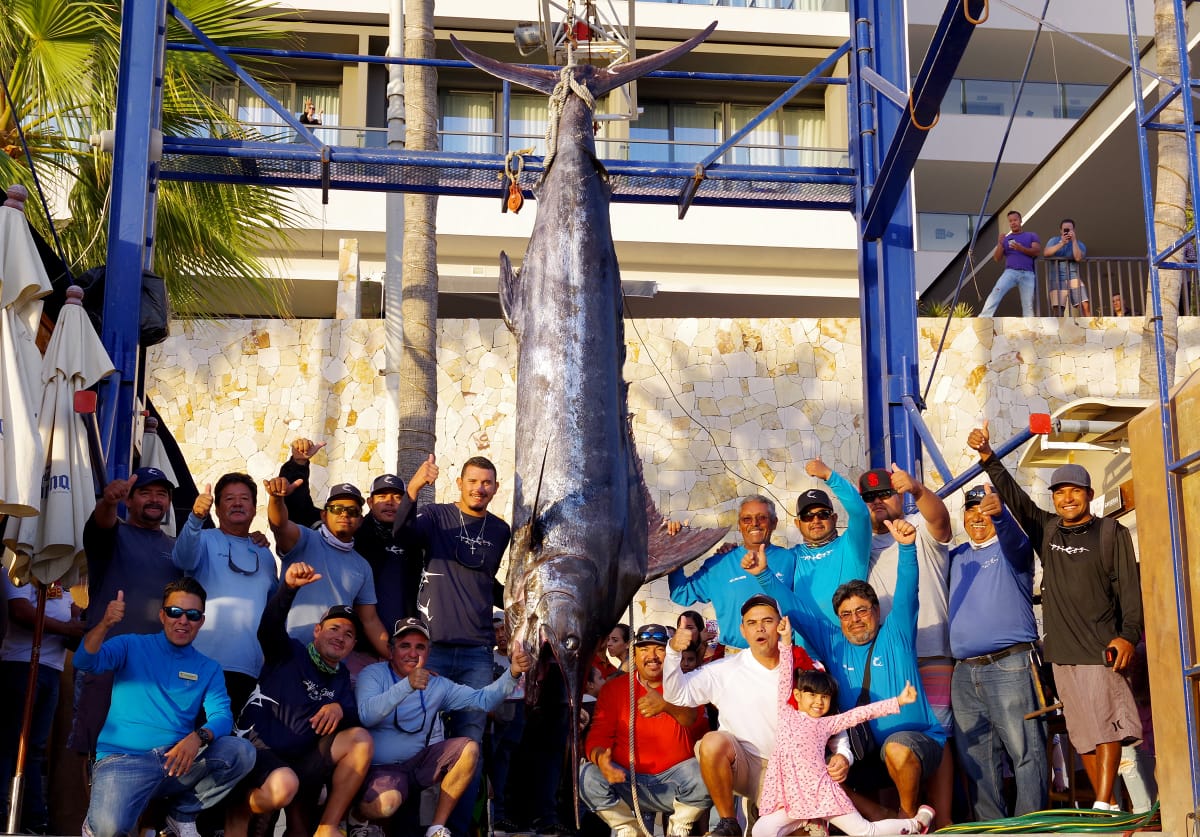 The Pisces Team showed up at the dock in support of their fellow crew-mates and anglers.