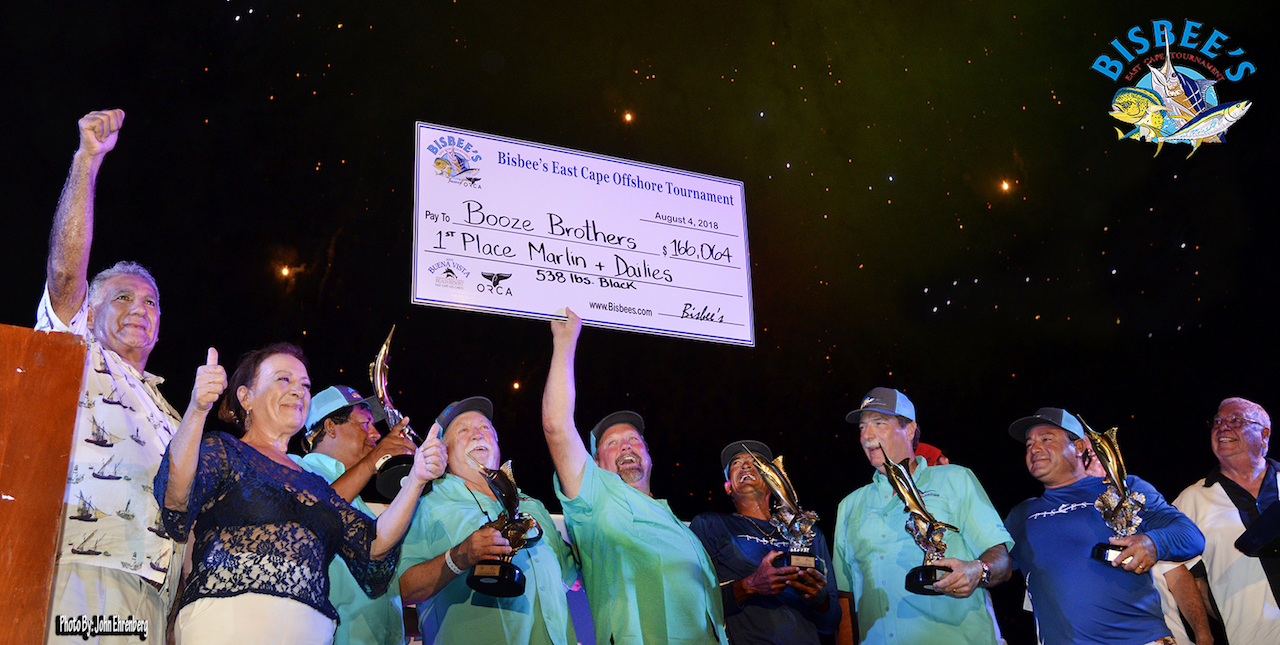 This year marked the 19th year of this event, the starter of the big money tournament season.  Sixty-two boats participated leading to an all-time high payout spread amongst eleven different boats.

SECOND PLACE: Feelin Azul $8,788  for a 493 LB black marlin on day one of the tournament also (the larger fish above, swept all the jackpots on day one but nevertheless they had the second largest fish). 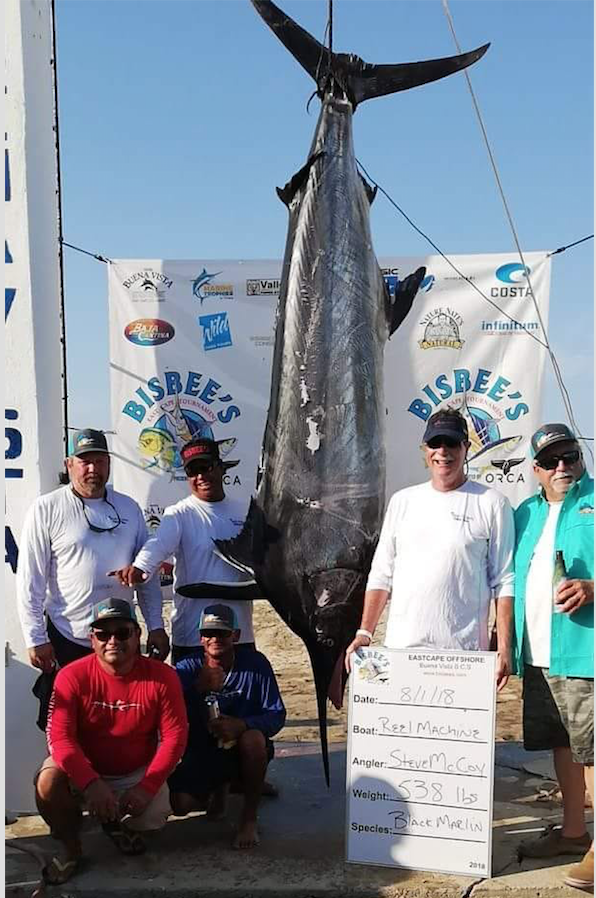 More about the winners: Team Booze Brothers consisted of Victor Johannsen, a lentil farmer from Montana and Dennis Bartley and Steve McCoy both contractors from Texas. Victor is the proud new owner of Reel Machine a vessel he purchased recently through Pisces which was formally named Shambala. The general consensus amongst the other anglers in the event was that it couldn’t have happened to nicer guys.  Victor met Dennis on an airplane to Cabo a few years ago and Dennis has been fishing with Pisces since 1992, so obviously has plenty of experience. Steve is a long time friend of Dennis and happened to be the angler in the chair when the fish hit.

They had been fishing live bait early in the day, but Victor asked if they minded changing to lures to be able to cover more area- we should mention here that Victor landed a 772 LB blue marlin in 2016 on a regular day trip (with his same Captain from Reel Machine, Libio Sandoval), and Steve released a 400 LB blue last summer – so with these experienced anglers on board they were ready when the fish bit at 3.20 in the afternoon and started a hard run taking a bunch of line; the fish ran a total of four tines before they could get it handled. They were fishing with 80 two speed Penn Internationals with 130 LB test line  – the lure belonged to Dennis and was a new rainbow colored one as he described it. They were only three miles offshore when they hooked up and took two hours to subdue the fish and then get it on board before heading back to the scale.

Speaking to an elated Victor Johansen as the tournament dinner at Hotel Buena Vista on the beach,  he said “it’s been a bad year up in Montana, the hail ruined a bunch of my crops, then a tornado hit and destroyed my hired hands home and workshop so this makes up for it”, asked if he wanted to say anything else he said “just thank you”, reflecting on how glad he is to have his new boat and how much he enjoys it and winning the tournament was the icing on the cake. He was very happy with Captain Libio, and Deckhands Eleazar Cortez Richie (who is also the Captain of Pisces Panga Poseidon), and Manuel Acu?a Castro. Victor showed his appreciation by giving them a nice percentage of his winnings.

The event was a great experience and the setting reminiscent of old time Cabo with great food, friends and lots of fish caught. 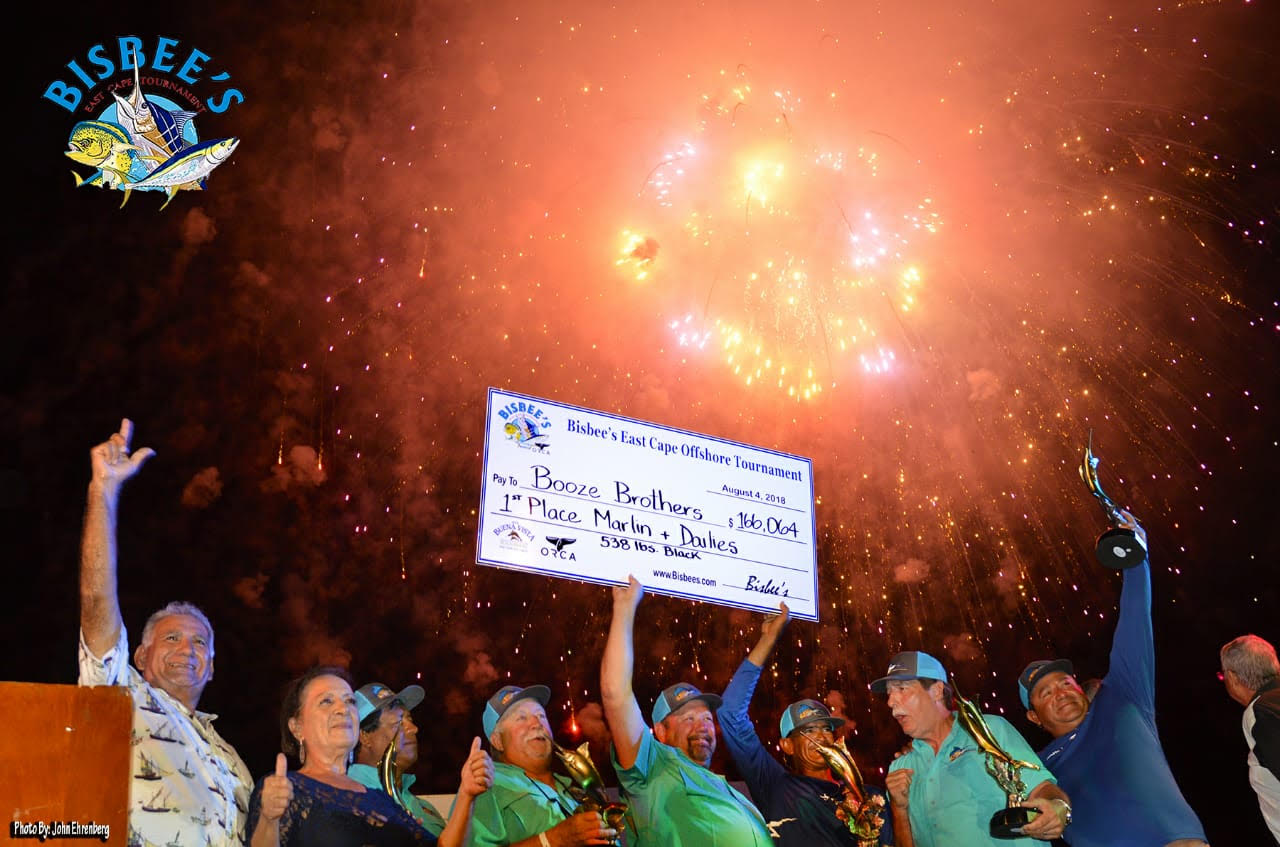