We’ve just received an update from Quivira Los Cabos and the announcement of the opening of Quivira Golf Club, set for the October 1, 2014, and thought you might find it interesting as well. Great information about the development and the golf course created by the golf master himself, Mr. Jack Nicklaus. 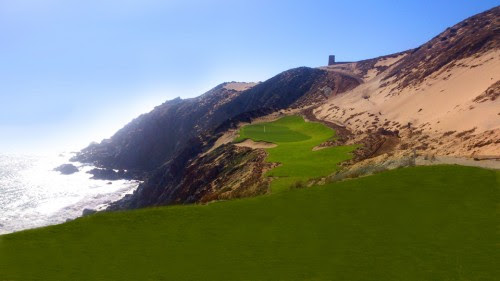 “Our team has worked with the canvas Mother Nature provided to create what we hope is one of the most spectacular courses in the world,” Nicklaus said of Nicklaus Design’s sixth course in Los Cabos. “This property afforded us a rare opportunity because of its topographic diversity and natural environment.”

The formal opening of the 7,224-yard, par-72 layout on Oct. 1 will mark a watershed moment in the history of golf development in Los Cabos, a destination revered for its consistently sunny weather and unique mountain-desert-ocean ecosystem. In addition to its stunning panoramas and breathtaking drops from tee to fairway, Quivira offers players more oceanfront exposure than any other course in Los Cabos. All 18 holes feature outstanding vistas of the Pacific and, in the winter months, views of breaching whales.

The $40 million golf facility at Quivira, more than eight years in the making, commences at sea level near the rolling surf before climbing to a highest point of more than 350 feet above sea level, where the views are a match for the challenge. During the round, players can refresh themselves at four comfort stations interspersed throughout the all-inclusive facility. A halfway house situated near the eighth green, called the “Oasis,” will showcase the culinary talents of the resort’s chefs, with tuna sliders, fish tacos and Mexican specialties available.

The first three holes at Quivira head inland away from the sea before reversing direction at the par-5 fourth hole, which plays over a pond to a broad fairway framed by rolling dunes and raw desert.

The three-quarter mile drive to the fifth hole, which crosses arroyo-spanning bridges and traces a switchback route up the side of a mountain, has already been dubbed the “Greatest Drive in Golf.” At more than 200 feet above sea level, the tee at the short par-4 fifth hole offers splendid views of the beach and crashing waves far below. The par-3 sixth, its concave cliff-top green carved from the base of a massive dune, is equally dramatic. The layout then weaves through the dunes, returns to the cliffs at the dazzling par-3 13th hole, proceeds inland through the desert toward distant mountain peaks, and drops sharply from a set of elevated tees at Nos. 16 and 17, a pair of thrilling par 4s. Quivira’s par-4 18th hole, stretching to 469 yards, is a classic links-style creation that plays to an infinity-edge green overlooking the sea.

Completing the experience at Quivira Golf Club is a stylish, thatched-roof clubhouse between the first tee and 18th green that offers a large rectangular bar, a casual steakhouse, and ample outdoor seating overlooking the sea. Beside the clubhouse is a spacious double-ended practice facility that parallels the ocean, as well as an elongated practice putting green and an expanded short-game practice area.

Quivira Golf Club is accessible to guests of the four Pueblo Bonito Oceanfront Resorts and Spas in Los Cabos, and to owners of properties in Copala, Montecristo Estates Luxury Villas, and Novaispania Residences.

As a player, course designer and good-will ambassador, no single person has changed the face of the sport more than Jack Nicklaus, and no name is more synonymous with greatness in the sport of golf than his. Nicklaus, 74, has been named “Golfer of the Century” or “Golfer of the Millennium” by almost every major golf publication in the world. His competitive career has spanned five decades, and his legend has been built with 120 professional tournament victories worldwide and a record 18 professional major-championship titles. The legacy he has left as a player can be rivaled only by the legacy he is leaving as a golf course designer. To date, Nicklaus has been involved in the design of 290 courses open for play worldwide, and his thriving business, Nicklaus Design, has 380 courses open for play around the world. Nicklaus Design courses are represented in 36 countries, 39 states, and at least 110 have hosted a combined total of close to 750 professional tournaments or significant national amateur championships. The firm currently has projects under construction or under development in 22 different countries. Quivira Golf Club will be Nicklaus Design’s sixth course in Los Cabos and his 23rd overall in Mexico