Onlookers were stunned by this strange fish.

Around 10.15 this morning, Roberto Gonzalez a realtor from Pisces Real Estate, was working very hard, sitting under an umbrella on the main beach of Cabo -El Medano at an open house we are hosting today at Hacienda. He was right in front of Villa 2 when he saw a commotion on the beach and a small crowd gathered at the water’s edge. His first thought was, “there’s been an accident” then he saw three locals supporting what appeared to him as a monster from the deep. He ran down to get a closer look and saw three locals assisting the strange creature, which appeard to be in distress as it struggled for air.

The local beach guys, were helping the fish to float, but it continued to float towards the beach. It really was a sight, being about fifteen feet long, silver colored with spots and a bright orange dorsal fin.

Once ashore, it was put back in the water, but Roberto could tell it was not going to last long. A panga from the Protected Areas department came and took it away. We have contacted scientists in La Paz to advise them and they will come and pick it up for studies to be made. These are deep water fish, rarely seen, unless they are dying. This is the first we have heard of to ever wash up on the main beach of Cabo though. 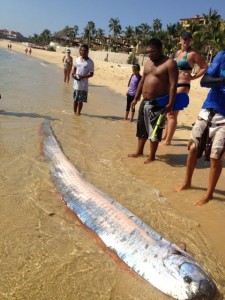