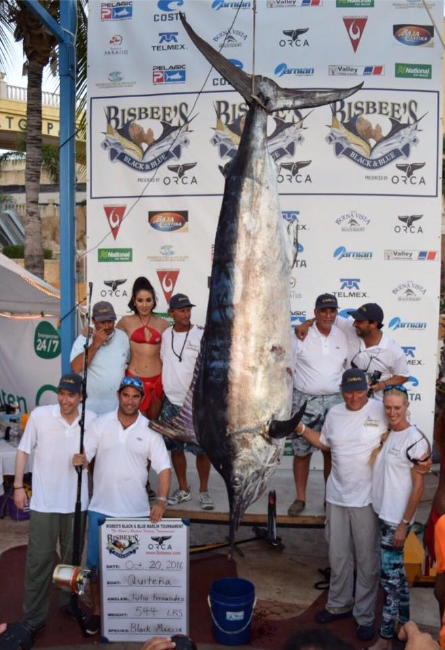 The most famous fishing tournament in the world, the Bisbee’s Black and Blue, came to a close this Saturday with an awards ceremony and dinner party for participants of the 2016 edition. As always, the tournament was full of excitement, although not so much on the first day of fishing, which saw no qualifying fish (300lbs and up) brought to scale. But with no qualifying fish comes a benefit, if a team brought in a big enough fish on days two or three. It would be worth more money in prizes, if they’d entered the daily jackpots for all days. In essence the total purse of $3,511,900 million dollars, is split up between who ever caught fish on the subsequent days. 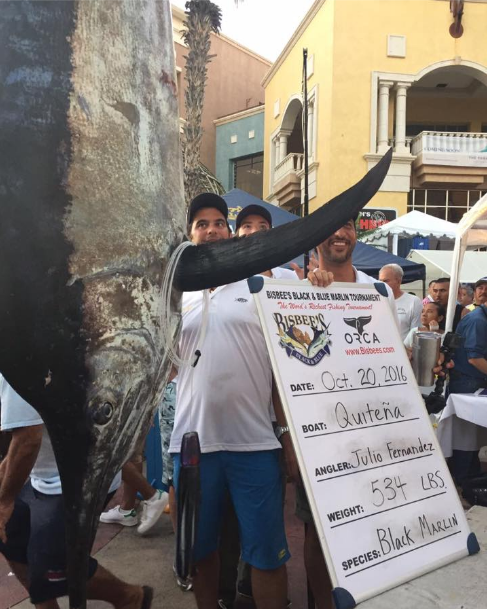 And that is exactly what happened on day two, when Mexican Team Quite?a, landed the largest fish of the tournament, a 534lbs black marlin, on a petrolero lure. Angler Julio Fernandez from Tampico, Tamaulipas told Pisces: “It was about an hour-long fight, although this has been a team effort for us. We have three very high-level captains on board with us, for example Marlin Parker, who is an absolute legend. And of course, my four friends that I’m fishing the tournament with.” Captain Parker’s tournament resume stands testament to his fishing prowess-His teams have taken first place honors more than fourteen times in major tournaments in the last 15 years. Parker also caught a 1400-pound behemoth, which stands as the fourth largest Pacific blue marlin ever caught on rod and reel. When we asked him what he thought of their then total winnings of $1.8 million dollars, Fernandez broke out into giddy laughter responding: “I think I’m going to have to get a bigger wallet!” We’d say that Team Quite?a is going to need a suitcase, more like it. On awards night, their total cash earnings shot up to $2,183,000 dollars, thanks to the fact that they entered all but one of the jackpots for all days. 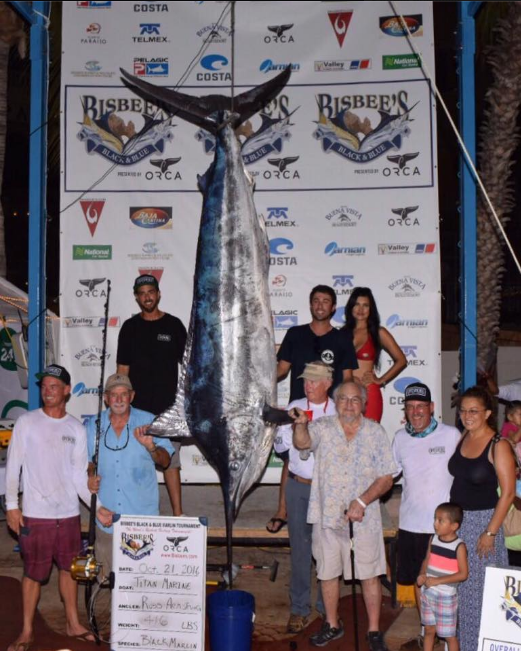 Second place went to Team Titan Marine, with angler Russ Armstrong on the C-Bandit bringing in a 416lbs black marlin. They came in fairly late to the dock on Friday and shook up the medals table, as it appeared that all had been decided on Thursday. Since another Mexican team, DRAKKAR, was in second place with their 349lbs blue from day two. Armstrong has been fishing the tournament for many years, and is a close personal friend of founder Bob Bisbee. Mr. Bisbee posed for some pictures with the winning fish, evidently excited that his long time pal had managed this extraordinary feat. Team Titan Marine netted a total cash earnings of $685,000 dollars, with their second place finish. 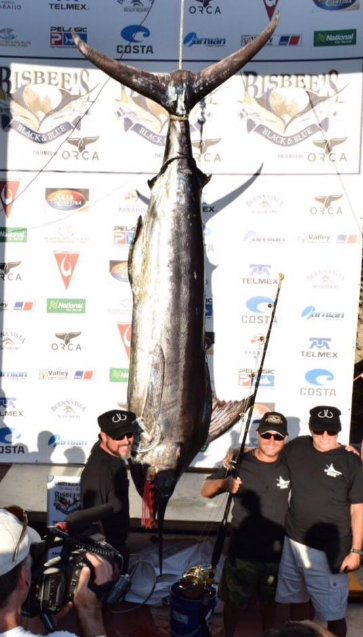 As we mentioned above, Team DRAKKAR placed third overall in the tournament, with angler Gilles Asunsolo from Mexico City bringing in a 349lbs blue marlin to the dock. Even though their total cash earnings weren’t the largest of the tournament, at $40,500. It was clear from our interview with Asunsolo, that this tournament was about way more than prize money for him and their team. This was a family affair, with his father, brothers and close friends making up Team DRAKKAR. When asked how he felt about his catch, Asunsolo replied: “We came here to represent Mexico. This is the 5th time we’ve entered the Bisbee tournament, and none of this would have been possible without my father here.” To which the elder Asunsolo responded: “Actually, none of this would have been possible without the help of my sons, all of whom are fishing the tournament with me.” There was another reason that made this day so special; it was the Asunsolo patriarch’s eightieth birthday! Without a doubt this will be marked as one of the top fishing trips of their lifetimes. 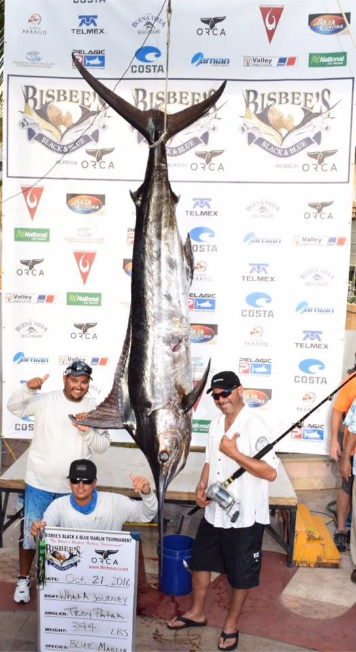 All in all, this is how the final tally panned out:

4th Place-$10,800 dollars for team Five More Minutes, aboard the locally based What A Journey, captained by Javier Abaroa. Angler Troy Patak brought in a 344lbs blue marlin.

5th Place-$487,200 dollars for team Fastball, captained by Jim Gates. They also won the Chupacabra $20,000 jackpot, a winner takes all purse. They brought in two fish to scale, angler Chip Wagner a 304lbs blue marlin, while angler Bobby Patton brought in an underweight 201lbs blue (reducing their points to 81). They still managed to make the third highest earnings after entering all jackpots. 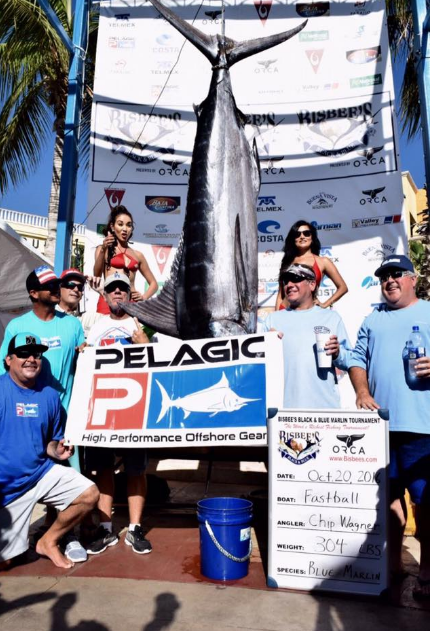 The release division of the tournament, which takes into account successfully released black and blue marlin under 300lbs, striped marlin and sailfish; saw the following winners: