The following article was published on Bloomberg and we thought you might find it useful; it has some great information about Tiger Woods’s project in Los Cabos, as well as some real estate information and facts. 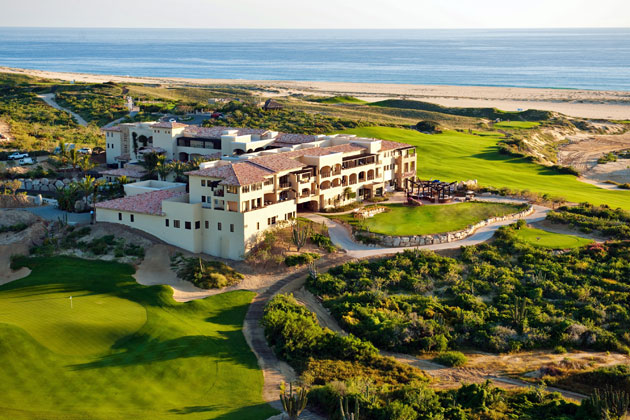 Tiger Woods is turning the Mexican desert in Los Cabos into grass fairways.  Americans with home- equity loans are seeing green there too.  Woods, the winner of 14 majors, will open El Cardonal this year, making his debut as a designer of a completed course.  The 71-par layout near the southern tip of the Baja Peninsula is part of the coastal Diamante Cabo San Lucas resort, where villas come with palapa bars approachable by infinity pools.

The golf courses and beaches of Los Cabos are luring Americans who are able to get home-equity loans to buy in Mexico as U.S. housing prices rise.  Buyers, mostly from California, are purchasing condominiums, villas and estates ranging from $200,000 to more than $7 million following a plunge in prices, according to Deloitte & Touche LLP.

“What I really wanted to do was take advantage of the market,” said Joy Gipson of Lake County, California, who this year financed a 1,600 square-foot Los Cabos condo with a home- equity loan.  “Real estate is starting to revive and I didn’t want to get priced out again.”

Visitors to Los Cabos have the rugged Pacific Ocean to the west and the calmer waves of the Sea of Cortez to the east.  The coastal region has long drawn scuba divers.  It has such a large diversity of fish, sharks and ocean habitats that the late deep- sea explorer Jacques Cousteau called it the “world’s largest aquarium.”

In the 20-mile-long coastal corridor connecting the towns of Cabo San Lucas and San Jose del Cabo, multimillion dollar homes sit aside $500-a-night hotels.  With art galleries and nightclubs built around a 380-slip marina for 200-foot yachts, Cabo San Lucas is the contemporary companion to the colonial architecture of San Jose del Cabo.

The 31 percent gain in U.S. home prices since January 2012 has given property owners more equity.  That’s made it easier for them to get home equity lines of credit, or Helocs, for as much as $500,000.  To qualify, borrowers usually need 20 percent equity in a property and a credit score of at least 720 on a scale from 300 to 850, said Keith Gumbinger, vice president of HSH.com, a mortgage data firm in Riverdale, New Jersey.

American buyers in Mexico are benefiting from the decline in the costs of credit lines, which have adjustable rates tied to the prime rate.  The average rate for a $100,000 Heloc was 4.55 percent on May 21, down from 5.8 percent a year earlier, according to Bankrate.com. The average rate for a 30- year fixed mortgage was 4.17 percent.

“I leveraged the equity in my house and spent my savings,” the homebuyer Gipson said.  “I did a lot of research into financing.  You can finance homes in Mexico but it’s very expensive.”  Wells Fargo & Co., the largest U.S. lender, is offering a $100,000 Heloc at 5.13 percent in Los Angeles and San Diego, with a minimum credit score of 700, according to Bankrate data.

U.S. banks held $596.2 billion of Helocs in the fourth quarter, according to the Federal Reserve. That’s down from the $894.7 billion peak in late 2008, when banks provided credit lines to owners with no home equity, contributing to a wave of defaults.

While resort areas such as Puerto Vallarta and Los Cabos are getting a boost from international buyers, the home market in Mexico has struggled amid weak economic growth and shifts in government policy.

Los Cabos real estate lost 40 percent of its value in the global financial crisis, according to Bruce Greenberg, director of real estate valuation services for Deloitte in Mexico City.  Prices have risen about 5 percent a year since the recovery started in 2012, said Greenberg, who has valued more than 1,000 Los Cabos homes.  “Mexico shadows what happened in the United States,” Greenberg said.  “The recession of 2007 and 2008 rolled in and that’s when the bottom fell out.”

Real estate entrepreneur Kenneth Jowdy, 49, bought the property on which Diamante Cabo San Lucas sits in 2006.  The resort comprises 1,500 acres of coastline and sand dunes and includes a golf course designed by PGA Champion Davis Love III, a lagoon for water sports and an equestrian center.  Love’s Dunes course, which opened in 2009, was ranked no. 1 in Mexico by Golf Digest in 2012.

Jowdy started selling home lots in 2010, and since then, the average sale price has increased about 10 percent annually, he said.  Oceanfront lots from half to three-quarters of an acre sell for around $2 million, he said.

At El Cardonal, which features views of the Pacific Ocean, workers were laying grass on the fairways in early May, Woods said on his blog.  El Cardonal’s design, characterized by holes that require strategically placed shots with several playing options, was influenced by the old-style courses of Southern California that Woods played growing up, he said.  “There are going to be different ways to play every hole,” Woods said on the course’s website. “Angles of approach are going to be very important and will dictate the type of shots you should consider.  I love this kind of golf.”

Golf villas at Diamante have four bedrooms, five bathrooms and a large living room that extends onto the terrace. There’s even a garage for a golf cart. The properties are built around an open courtyard in the style of centuries-old Mexican haciendas.

“There are other projects that were basically mothballed after 2008,” Jowdy said from Cabo San Lucas.  “Now you drive by them and you see equipment out there moving dirt and construction started.”

U.S. buyers avoid getting financing in Mexico because it’s too costly, said Julie Kershner, a broker at Sotheby’s International Realty in Los Cabos.  Americans buying in Mexico should expect to pay 14 percent to 16 percent for mortgages.

While mortgages are set to 30-year amortization schedules, they often must be paid in full within eight years, said Ryland Apsey, a mortgage broker with Mexico Capital Mortgage in San Jose del Cabo. He said buyers frequently must make a 35 percent down payment.

International buyers who obtain residency in Mexico typically get a 10 percent fixed-rate mortgage for as long as 20 years, according to Apsey.

Gipson, 57, a marketer for the public transit program in Santa Rosa, California, bought her two-bedroom, two-bathroom condo in Los Cabos as a place to possibly retire.  The $193,000 home is a six-minute walk to the beach.

Gipson said the addition of more elite golf courses in Los Cabos will make it even more appealing to Americans.  “It’s going to turn into San Diego South,” she said.

For more information about Diamante and other golf and ocean view residential communities please send me an email to marco@piscesgroupcabo.com or leave a comment below